Archive for the tag “Fiefdoms”

When you have been in-charge since 1986 it’s hard to remember those days where yourself we’re luckily picked into positions of government and had real elections. Since Mzee have had total control since the bush-war! Which is a statement in itself; here yesterday he claims superstitious power and Devine right to rule. That is inspiring and terrifying. Take a look yourself!

Mzee said this about his opposition recently:

“A president is next to God. You don’t tell lies when you are a president or aspiring to be one. You cannot have a president or somebody aspiring to be a president telling lies. That is a disaster for the country. You would rather say I don’t want to comment, but to tell lies when you want to be a president?” (…)”I want people who are engaged in the elections to stop bad politics, telling lies, trying to use violence because we are not going to tolerate those mistakes, in particular the use of violence and bad politics will be resisted and defeated. This should be clear to all and sundry” (Kiggundu, 2016).

He can argue that other candidates isn’t fit, that is what politicians do and point out flaws in plans in the way they want to run their station. This isn’t that, this is calling out and saying no-body except him can. The thing that bothers me is how he talks about lies and truth as “the President is next to God” means that there is a Devine order setting the standard on his behest. Mzee the man who caught the power with the gun, claims that God have given him the right. 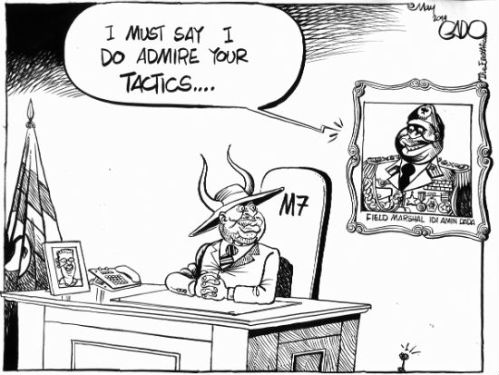 The lying is just wrong in many ways, he has been telling stories for thirty years, promised to retire more than twice and changed his mind about the constitution more than any kind of totalitarian leaders world-wide. So that he talks about leaders lying is like throwing stones in a glass-house, aye?

That he is messed up with the engagement into politics is meaning that it’s okay if it is on his terms. Something that is common now this days or facilitated to Mzee wishes. Like it is amazing “I don’t want to comment”. Than displaying his thoughts anyway: “but to tell lies when you want to be a president?” Well, he should know the answer to this, because he has forgotten the history of losing the rigged 18th September 1980 Parliamentary Election as the leader of the newly founded Uganda Patriotic Movement (UPM) and got only one seat and a meager display. As disaffection with the Electoral Commission of the time he went into the bush and started the National Resistance Army (NRA). Because he couldn’t stand the Obote II government he had ushered in together with help of Tanzanian forces that we’re God-sent to end the Idi Amin Dada dictatorship. Something many people are grateful for!

So let me point out the lie in the matter of hand as he says the Opposition lies. They claim the same as he did in the 1980s of fraudulent and rigged elections. There have been proofs of that ever since the Electoral Commission has run multi-party elections since 2001. Because the numbers towards the changed NRA into the political party National Resistiance Movement (NRM) shows startling numbers that only can be beaten by the Rwandan Patriotic Army (RPA) and now political party Rwanda Patriotic Front (RPF) who have run the country with nearly no obvious opposition. There been proof of stronger opposition in Uganda, so there is definite a lie. A lie that the world knows and the election observers since 2001 could tell or read through reports on these elections tells of malfunctions and frauds done by the ruling-party. Just like the lies of the political freedom and genuine candidates for the general election February 2016 from the NRM. 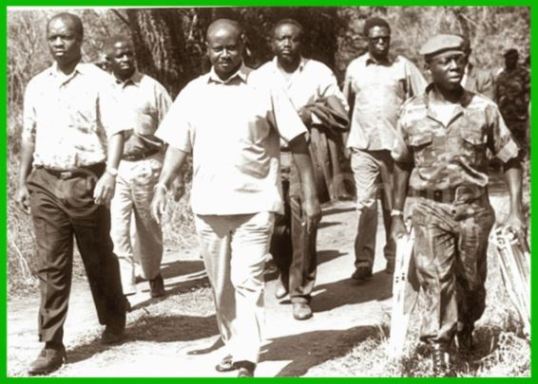 The man who made himself a hero because a lost election and have ever since rigged elections. First by not opening for multi-party systems meaning he neglected the oldest parties of the land Uganda People’s Congress and Democratic Party. The Buganda Kingdom party Kabaka Yekka (KY) we’re long gone since Obote, Mzee former running mate who he needed to get closer to power disfranchised the kingdoms and banished them. That is while you we’re in the bush we’re doing secret deals with Kabaka and his men. Because your needed their support to regain strength for the future dealings and strong leadership. That is another lie Mzee now deflects and tries to avoid since he try at any cost to add more kingdoms and fiefdoms to regain more loyal cronies that will not be political henchmen, but loyal subjects to his will since they will get a cultural position in their respected region.

Mzee, your claiming that opposition is making bad politics. That is way for you’re to lie, since you’re the guy who has set the standard for the politics done in the land in the recent decades. So if somebodies does bad politics in the land it’s because for the simple matter the executive have made it happen that way and rubberstamped it. The opposition which is still marginal in seats and places of power and with a shadow government doesn’t have the force to make that change, they can at least stifle business, but the NRM and their loyal paid cronies can decided the basic business.

Mzee I could go on and on. There is enough footprints in the sand been made since you started your political walk since you left University of Dar Es Salam in 1970s and started his political journey from there. Where he also went into wars and made civil war for his own gain and kept it ever since. That is not Devine powers next to God, that is the power invested in guns and alliance with necessary people to gain it, and then never leave.

Mzee, have enough lies on his own and to claim things on the opposition is just foul play, but at this rate it’s business as usual. Peace.