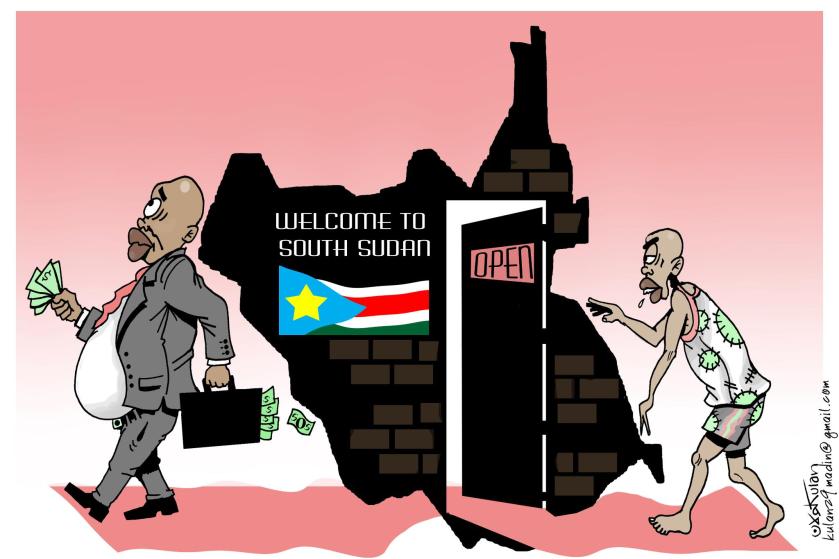 We can be sure that General Salva Kiir Mayardiit must be proud of the agreement done with the Kingdom of Morocco that has offered a fortune to build the new capital city of Ramciel. This is apparently very important for the Sudan People’s Liberation Movement (SPLM) who is already mixed in a dozens of issues. That the movement of Juba capital shouldn’t be the focus, but here is the agreement made earlier in February!

The agreement between the nations:

The deals include an agreement on the building of the South Sudan Capital in Ramciel which cabinet approved shortly after independence in 2011.

The agreements were on:

So the Kiir Government and Transitional Government of National Unity (TGoNU) has focused on the wrong things these days, as even court justices, ministers and others are deflecting, as the fighting with rebels and other fractions are weakening the central leadership. So the news of this is absolutely bonkers:

So the man who took the place of Dr. Riek Machar who is fighting the SPLM/A government with his SPLM-IO fraction, the reality is that the Central Government is so fixated on the Ramciel building that they have continued to work on it:

So that President Kiir is using time forming a working committee to work on building a new capital, instead of securing peace and shielding the citizens. The government is not using funds or securing the inflation, they are not making sure the people who go without water, food or shelter. Instead they are fixated on building a new town to have the main buildings. A new administrational seat instead of the one they have had for a long time. So they are creating a new administrative seat, so they might have a commercial seat and the administrative in the South Sudan. Still, the issue is that nation is grappling with such giant issues that should not contain city or town building at the moment.

With over a million citizens abroad, with drought, with lack of food and armed battles with rebellion, as well as problems of raping soldiers and such, the administrative seat of government, should be the least of concern. The problem of getting petroleum export and pipelines sufficiently works, so the petro-dollars come’s safe in the state coffers too.

In 2011: “MP Andrew Acijok told Good News Radio that legislators representing Greater Yirol met on Saturday and they raised concerns about the governor’s appointment. He said an appointee from Greater Yirol would be more familiar with the background of the new capital and would be of greater assistance to the committee. Mr. Acijok stated that the communities around Ramciel have given the land for the development of the new South Sudan capital for free. Mr. Acijok said traditional songs show that Ramciel had local residents for close to two centuries. He added that Ramciel natives offered the land to Dr. John Garang be used by the national government. On September 2, 2011, South Sudanese ministers designated Ramciel as the site for a planned capital city. The place, an open space in Lakes state, is considered the geographic centre of South Sudan” (Catholic Radio Network, 14.09.2011).

So the modernization should be more than enough to focus on and to secure the current capital. Because the other dire issues and unfixed problems in the domain. All the people that are in the limbo, that is in refugee camps in Uganda, Ethiopia and Kenya. That the spies of South Sudan are following into these camps and nations to pick-out the rebels inside the neighbour nations. This been told by resigned officials that they even went this far. So the missing South Sudanese could easily been taken by South Sudanese officials and their friends in EAC nations. When we know that the United Nations blue-helmets, MONUSCO could safely transfer SPLM-IO into the republic of Sudan and to Khartoum during the month of July, 2017.

The knowledge of all of this, the dying need for food for so many with the drought, the instability of the arms and battles between forces, as the government army and rebels are trying to controls areas. The government should use the manpower and the arms to secure the population and not to use time to build a new capital. That is waste of the Kingdom of Morocco donor aid and also the spent man-hours that the South Sudanese authorities shouldn’t need to use. The building of the Ramciel instead of Juba is misusing the capacity and the structures that already there. Instead of building stronger institutions and using the time to focus on needed restructuring and negotiating peace with rebels. The Government are getting busy on a project instead of trying to build a lasting peace.

The South Sudanese authorities and government should focus on building the nation, building the institutions, building the legal framework and the civil society, instead their focusing on building a town and city. That is not a key issue or pressing demand; the demand is to show up and be there for the citizens that fleeing violence, killing and lacking shelter. Even lacks peaceful villages to grow food and sell it on the market. Now, it is time for something else than fancy projects, but instead being there for the people. Peace.