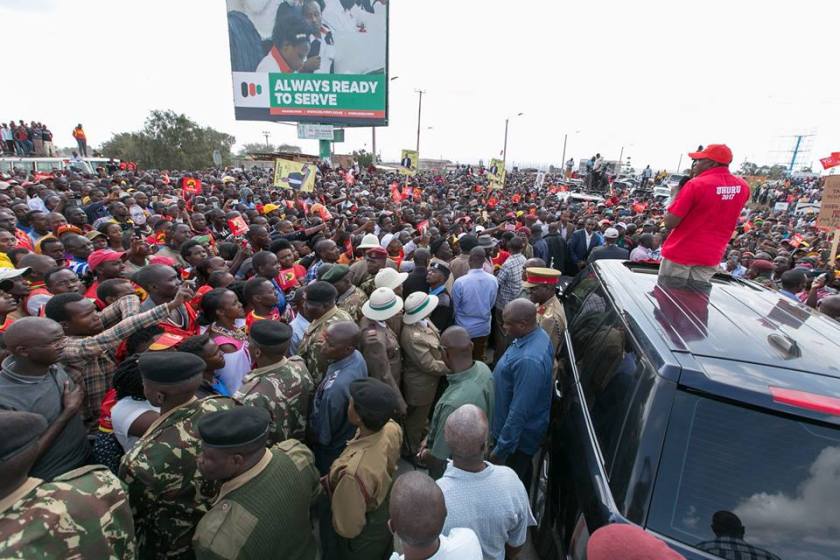 That President Uhuru Kenyattta fear the opposition is evident, maybe because of his ill track-record in the first term as President. He must fear that his failure of grand promises like lap-tops, jobs for the unemployed youth, national security against cattle raiding in the border region and also the famous stadiums that never appeared or even started to work on. Together with the stop of troubling scandals upon scandals like NYS, EUROBONDS and others. That are proof of maladministration and obvious grand corruption. Therefore, the Kenyan President should be more careful about addressing other people’s bad delivery, in the recent times these men haven’t even been in power. Like the President himself could have delivered more if he cared or if he didn’t want to create crony capitalism. Take a look!

“The President said Wiper Leader Kalonzo Musyoka has no credibility to stand in front of millions of Kenyans and make grand promises when he had failed to ensure that his own home village gets water. “What can Kalonzo deliver when we are the ones taking water to Tseikuru, his own home villages, where he was MP for many decades,” said President Kenyatta when he addressed Jubilee supporters at Mashuru, Kajiado County. The President also took on Raila Odinga who was the MP for Kibera for decades but never solved the challenges facing the residents. “We are the ones issuing title deeds to the Nubians of Kibera after all those years,” said the President. President Kenyatta also criticized Odinga for failing to do anything meaningful for the people of Kajiado for all the years he served in government or even as the Prime. Minister. “Why didn’t he do something about the roads here in Kajiado when he was the minister of roads?” asked the Presidnet. The President, who is on a meet-the-people tour of Kajiado County, said the Jubilee Government has served all Kenyans equally. “We want to continue with the work of connecting more home to electricity, ensuring secondary education becomes free and improve our road networks,” said the President” (The Presidency, 2017).

He is clearly just looking into the opposition, instead of focusing on what the government will do and what he can do. Since he knows his own legacy and his own accomplishments isn’t that big. If they we’re he wouldn’t re-post donated British ambulances months apart to look like the government does something genuine, instead he tries to trick the public with these sort of stunts. Clearly, he wants to blame the opposition to look good. When he knows his own achievements isn’t that swell. If they we’re he would point at them and praise himself. So the public in the district would smile and be happy of the development made during the Jubilee administration. Instead, he has to go back in time and blame the NASA leaders and leadership. While they have been in opposition and the Jubilee has had the most MPs and been the ones who could have fixed the issues. If not made it possible for the local government to fix it and have the economy to do so. That has not been the issue during the years of Jubilee. So his argument is pointless. Since he has himself had the time to add on budgets and get tenders to build roads and infrastructure in general.

If this doesn’t say enough. I don’t know what will. Peace.