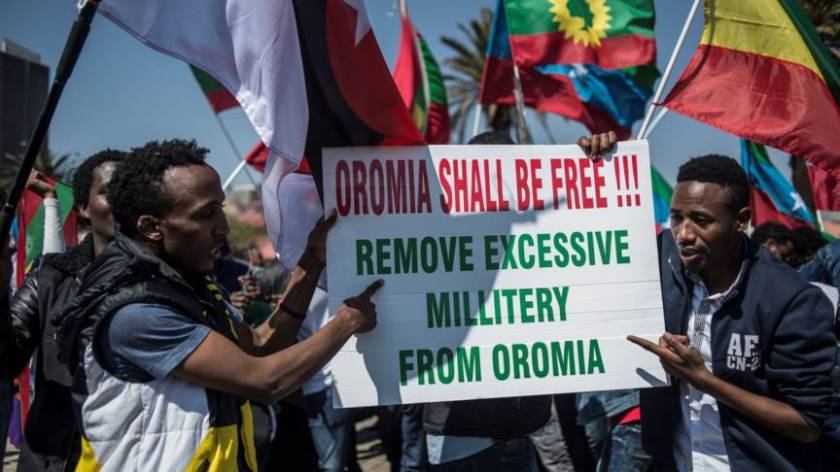 As of 29. March 2017 the continued State of Emergency from 2016 continues, as the oppression and military enterprise into Amhara and Oromia continues. The speed of this proves the neglect and little care for the civilians, as the military, Agazi squad and other battalions has been stationed in the provinces that clearly are tired of the rulers and their regime in Addis Ababa.

As stated in Parliament in Addis on the 29th March:

“Ethiopia’s House of Peoples’ Representatives voted to extend the State of Emergency by four months on Wednesday (March 29), passing a bill entitled “State of Emergency Proclamation for the Maintenance of Public Peace and Security Renewal” (…) “This extends the proclamation decreed in October last year. The Minister of Defense and Secretary of the Command Post responsible for enforcing the State of Emergency, Siraj Fegessa, told Parliament that the Command Post, chaired by Prime Minister Hailemariam Dessalegn, wanted to see the emergency decree extended to reinforce “the peace and stability which has been gained since Parliament declared the State of the Emergency” (…) “The State of Emergency has been amended twice since October, with the lifting of the curfews imposed on areas close to industrial sites and major development projects. More recently, it has also ended the arrest of suspects without court warrants, and lifted travel restrictions for diplomats” (…) “The vote this week follows the Prime Minister’s statement to Parliament two weeks ago that “the majority of people surveyed by the government wanted to see the emergency law extended.” (Ministry of Foreign Affairs, Ethiopia, 31.03.2017).

So even if this is a softer ban and less limiting of the public will and public opinion, still the clear picture is that the dissidents of the Ethiopian People’s Revolutionary Democratic Front (EPRDF), will certainly get into arrests, detained or even taken away. The amount of citizens arrested during the period has amounted to 20,000 by some estimation. That is the size of decent town put into camps to silence their disobedient selves.

Good that somebody reacts to the measure:

“The Centre for Human Rights and Democracy in Ethiopia (CAHDE) is considering to mount a legal challenge against the legality of the state of emergency and its extension before the African Commission on Human and Peoples Rights and other relevant international human rights forums” (…) “We believe that the emergency did not meet the requirements of Ethiopian law and applicable international legal standards. Even if one assumes that there were reasonable grounds to believe that exceptional measures were necessary to respond to the ‘threat’ represented by the protests, the continued enforcement and extension of emergency measures is totally unjustified and disproportionate to the exigencies of the circumstances” (CAHDE, 31.03.2017).

So even Human rights observers and NGOs are reacting to the measure made by the Central Government to silence the provinces and regions who are in turmoil, where the army has used force and the police has rounded up locals. Where the cellphone coverage, internet that has been for long time disconnected by the regime and the other needed infrastructure has dwindled away. This is happening while the citizens are scrambling to survive in the efforts of the government to destroy their livelihoods and will to stand-up against them. If the government we’re democratic than they would accept that Amhara and Oromia we’re addressing the misgivings and the maladministration of the regions, while trying to negotiate and even give way to civilians. Instead, they are sending weapons, soldiers and turning of the electricity, and phone-lines. Such noble creatures in the EPRDF.

However, we do know now that the EPRDF now fears demonstrations and dissidents so much that would kill their own, create lack of food and use the extended drought to see who will be loyal subjects, as the oppression and extended security operation inside the regions has not stopped and doesn’t seem to have an idea of when to stop. The reality is that the false flag of wishful peace, when they themselves pick up the guns or the bracelets to detain or kill fellow citizens. That is the end game of the Ethiopian tragedy, where to many lives are lost for wanting a government that cares about more than their own pockets. As seen repeatedly, that they do not care and surely the citizens wants someone govern with accountability and transparency in Amhara and Oromia. That is surely not happening now! Peace.