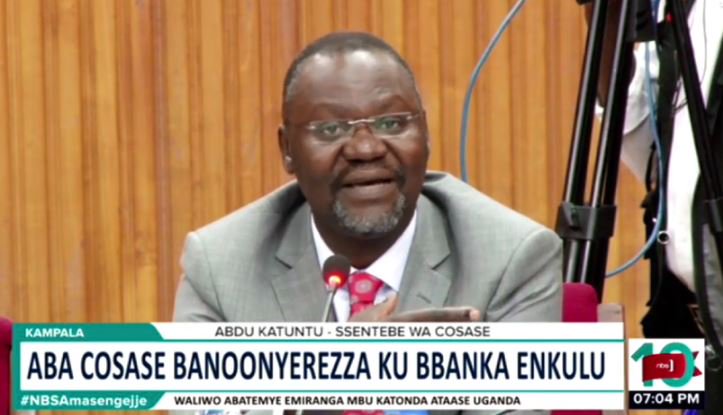 Abdu Katuntu got to keep the position and chairman of the Parliament’s Commissions, Statutory Authorities and State Enterprises (COSASE) on overtime to finish a report on the closure of 7 defunct banks in the Republic. He got the lifeline by the Speaker Rebecca Kagada in Parliament in January, as he wasn’t ready to deliver the report.

Katuntu as the MP who ran the committee decided on when to drop the report, which the report was dropped on the 19th February 2019. Now, today the IGG letter of the 19th February 2019 asked the Internal Security Organization (ISO) to look into the investigations and the possible kick-backs for a lenient report, which this was. The Report dropped was sleek, soft and guarded. Therefore, the question of what the COSASE is shielding or didn’t dig into could come into question.

If there was some bankers, some inside Bank of Uganda or anyone else of the Stakeholders of the defunct banks would enforce kick-backs to the Chairman and the Committee wouldn’t be surprising in relations to this is the Republic of Presidential Handshakes. In the Republic where the MPs are paid for voting in favour of favourable bills and motions of the Presidents agenda. Therefore, the initial idea of the IGG fits the state of affairs.

BUT, this is a hit-job, as this is leaked as the COSASE is getting new leadership, as the report has been delivered to the public and to the Parliament. The IGG and AG could act upon the work that Katuntu delivered. Nevertheless, there are more stakes at hand, as there are invisible hands overshadowing, as the cronies and investors, whose could be close to the President could be implicated. That is why the President was so adamant statements about the whole investigation and that it should have been done behind closed-doors. However, that didn’t happen.

Katuntu thought he did good, thought he delivered for the ones he made promises too. He thought with the extended time and promise of leverage, that he wouldn’t be hit. However, the President and his security organization is still on a vengeance. They are retaliating now, because the state suddenly looks into it. Because, the state is trying to save face.

It is weird timing that they are starting to investigate now, as they could have looked into the issues within the BoU before this, as there was plenty of banks closed wrongfully. Still, it didn’t matter then, but now it does. That looks weird and looks like a hit-job.

That Katuntu is now the latest victim… not the last, whose being used, tricked and later discarded. Peace.