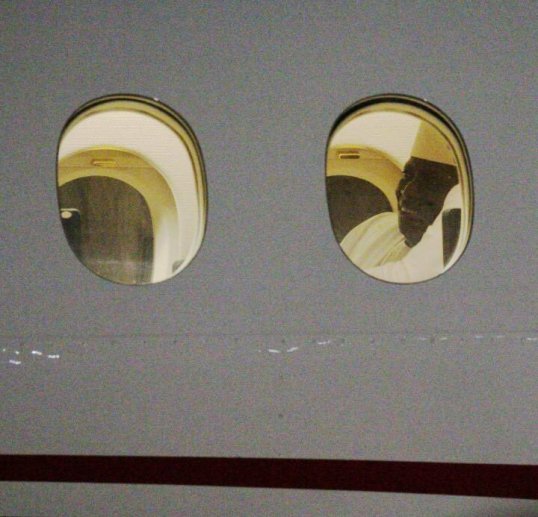 “a :  the state or a period of forced absence from one’s country or home

b :  the state or a period of voluntary absence from one’s country or home”

Yesterday was a special day in Banjul, as the incumbent President of 22 years we’re embattled and was besieged by ECOWAS troops, even Senegalese troops had driven around in the The Gambian Republic. This after ECOWAS had tried to mediate with the President Yayha Jammeh as he lost the election in the end of last year. The Declaration of 2nd December gave the Opposition Coalition winner Adama Barrow, as the President we’re left more and more alone, as his legal advisors and cabinet resigned when the President himself order nation into ‘State of Emergency’ days before he was told to leave.

It must be a day of reflection today how the ECOWAS leadership mediated with Executive; they could be more violent and less straight forward. The reasoning with the other President in Alpha Conde from Guinea to mediate and be there as the leaving the republic where near. The conversation and discussion these big-men had must be legendary as Adama Barrow we’re waiting for the time for him to rein as the troops of ECOWAS was all around the Gambia.

The press and pundits we’re waiting all day, there we’re dozens of people waiting on the Yundum International Airports, as the convoy left the State House and then the Hotel. A Hotel the stayed at for hours. As the Opposition and now ruling regime that we’re in Dakar we’re obligated to say, that Jammeh we’re leaving and the final details we’re ironed out for him to go. Jammeh wouldn’t leave without his stolen wealth and gains for the two decades of rule. Ex-President Jammeh had to leave with the gravy and promises of not getting his crimes tried in court. That just the way the Executives execute their wishes, just the way Executives that lead business into bankruptcies as still getting heavy end-packages from the failing companies. 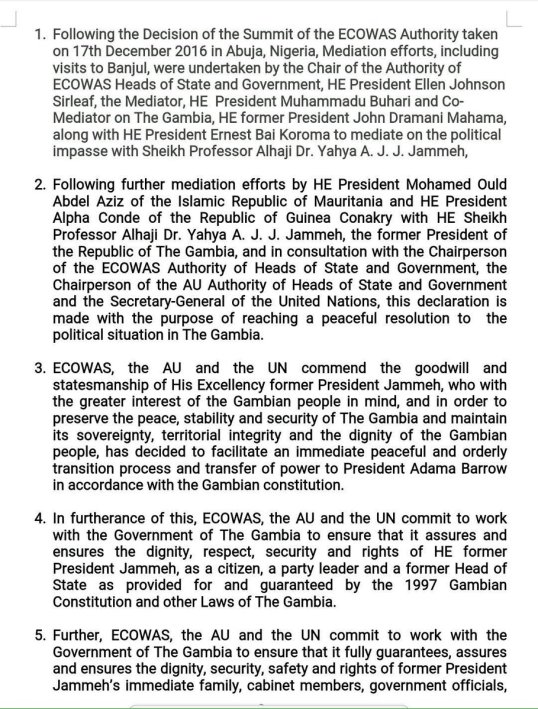 All of this was happening as the South African government and Botswana government didn’t recognize Jammeh as the Executive of Gambia anymore. The waiting yesterday was so long, like the man was thinking people wouldn’t execute the idea and get rid of him. Like he could salvage himself and still be the man. He leaves with wealth and security in a foreign nation. Where a fellow dictator can be his friend and can get use of his investment power. Surely Teodoro Obiang of Equatorial Guinea will enjoy having a golfing buddy that has also silently left the opposition in the wind in his days in power. Two friends who knows how to deal with dissident voices, difference is that Obiang still lingers on after a direct coup d’état against his Uncle, Jammeh left after keeping power since 1994.

Barrow will have to work hard to make sure procedure and government institutions are strengthen, as Jammeh has been all about him and his will. Now its different age and the longevity of somebody else should matter on consensus and building institutions of governance, accountability and transparency. None of that is easy, but that is the wishful tale of the Gambian Democracy.

Jammeh into exile isn’t new, that previous Presidents has ended that fate is old. Their hunger for power is eating nations into they are depleted and tired. Therefore the wish for any kind of other leadership ends with them either ending the life of the leader or them sending them far away. Jammeh is lucky who skate off to Equatorial Guinea. That he gets his wealth and his life. That he is not Courtside either in Banjul or at International Criminal Court in Hague in Netherlands. Jammeh could quickly get visitation cards and travel to answer for his crimes against humanity, as only in 2015 he let an opposition leader die inside his prison. That on his orders and his will. We the world will not forget the ones that died so you could stay in power. No matter what sort of island or what sort of lifestyle you have outside of Gambia.

We could look at others who had the same fate and see how easy Jammeh came out of it yesterday, he could have harder outcome and more costly. Some people might say it had been fair as he stole a nation for decades and ruled with an iron fist, with no mercy and therefore, why should the people show him mercy back? 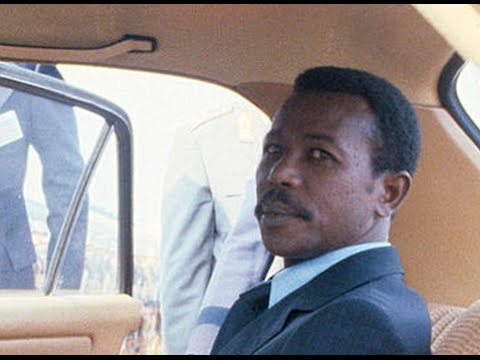 “Shockingly, Mengistu is alleged to have personally murdered opponents by garroting or shooting, saying that he was leading by example” (…) “Still, after his ouster, the government of Zimbabwe readily offered Mengistu sanctuary. Citing the Ethiopian dictator’s long standing friendship with President Robert Mugabe, Harare made it clear it would not extradite the exiled leader” (…) “For several years after first landing in Zimbabwe, Mengistu reportedly lived a lavish but reclusive life, amid fears over his safety. He resided in a posh Gunhill suburb in Harare. Much as Mengistu kept a low profile, many detested the fact that he was reportedly unrepentant about his past” (…) “In fact, in the very few interviews he gave to the Zimbabwean media, Mengistu said he had no regrets about his rule, arguing that he tried his best for Ethiopia. As matters turned out, not everybody agreed or was happy with Mengistu’s past and he constantly had to look over his shoulder” (Mwagiru, 2015).

“Also to die in exile was former Cameroonian president Ahmadou Ahidjo, who after being deposed by President Paul Biya spent his remaining years moving between France and Senegal. He died of a heart attack in Dakar on November 30, 1989 and was buried there” (Mwagiru, 2015).

Just as you should know Jammeh took with 13 expensive luxurious cars in a Chadian Cargo Plane yesterday, as token for his gracious years in power of the country. He took with him other needed advisors too like: “Lt. Gen. Saul Badjie, head of the Republican National Guard; Lt. Gen. Umpa Mendy, Personal Protection Officer; Amadou Joof, a senior aide to First Lady Zineb Jammeh; Jimbe Jammeh, Senior Protocol Officer, some few soldiers and other officials who may be wanted” (…) “Those traveling with Jammeh are also taking their immediate families with them in exile” (Phatey, 2017). Surely this opens the window of further plans in the future to gain power again, if not make a Gambian village in Equatorial Guinea. This certainly proves that Jammeh elite has run with him and had to be covered in the agreement made between ECOWAS and Jammeh for him to able to step down.

What is positive is that even if Jammeh leaves with a lavish lifestyle he hasn’t been promised or signed an agreement offering immunity. Therefore his past can hunt him in the island paradise with his fellow elite. Jammeh can also by fellow allies of Gambia get him warranted to be tried in Banjul. That is depending on cases or filing of cases towards his time as the President.  That is only time can tell, but now the importance is what Barrow and his regime will do. What Barrow will put in play and how he will be leading the Gambian Republic! That is up to Barrow and what sort of leader he is. Peace.