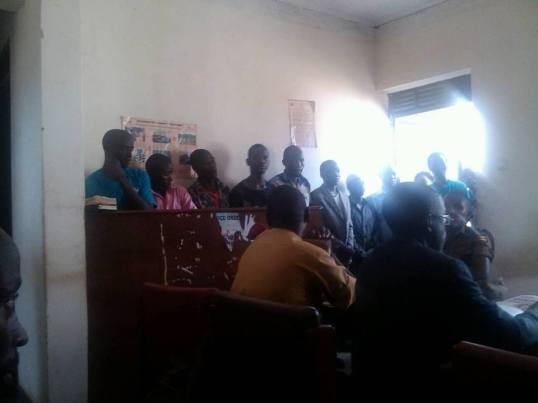 There are sometimes political activist are doing unlawful behavior. But the Lyantonde FDC members did this weekend was to meet and greet fellow party members which were impersonated while travelling to the Rukungiri rally.

What they did in Lyantonde on Saturday was to visit Dr. Kizza Besigye, Hon. Ekanya and Hon. Wafula.

Parts of the nine people of the FDC that is now courtside this people is for instant the FDC Chairman Yusuf Matovu, Womans Secretary of the town Yudaya Naiga and Town-Council Richard Kayondo. Also the FDC mayor who has a delegation with him in court is also accused on the matter and he is Mayor Kayemba Afayo.

So it is now official from the Police in charge of the area that visiting fellow comrades in your party is illegal. They have been in jail since Saturday in Lyantonde for visiting the big-men in their own party. And if they are sentenced to more jail-time for it then the system is so cracked and that the NRM party is in reality the only legal entity. Since the other ones can support each other, even when preventive arrest of fellow brothers happens, they can’t give them a hand without ending behind bars themselves. The District Police Commander (DPC) Thomas Keith Eyaku surely should be advised to do something else. Because they should know that this is madness and doesn’t make sense in sending  these 9 FDC members (to court) for doing what they did. Which if that is breaking the law, then please get new laws into fruition and the public need to see how it is illegal to meet fellow FDC members? Where does it say? Mhmm!

The result from being Courtside today:

“Bail conditions for FDC leaders in Lyantonde court. They include: 4 sureties, 10mn/= each – non cash, plus land titles. These FDC leaders were arrested last week upon visiting their fellow FDC members who were assaulted by police officers on their way to Rukungiri for a political rally. Court adjourned to 28th October. 2015.”