It feels like we have been here before, the attempt of stopping democratic rallies that was planned to be hold in the district of Isingiro today. ‘My Land, My Life’, as he earlier in the day was taken by Police and assaulted out of his vehicle on the Kikagati-Isingiro border, close to the Isingiro district. He was taken by the Police into Ntungamo, where he was detained for the day. Dr. Kizza Besigye arrested while traveling to a rallies, seems like the pre-campaign period of 2015 are mentally back in the minds of the Police Force.

This is not the first neither the last time the police will violate his rights in might of the National Resistance Movement and the wonderful dictator President Yoweri Museveni, the grand peacemaker of Congo, Rwanda and South Sudan. But in his own home, he cannot even let a political advisory travel and hold rallies. Therefore, again he was taken without warrant, without warning and without care of safety.

“Moses Muzima, the Isingiro District Police Commander, says they arrested the FDC officials for attempting to hold a rally in the market place and refugee settlement without police clearance” (Daily Monitor, 2017). We all saw that coming? The Public Order Management Act (POMA), the Anti-Besigye Act, the blessed gift of Parliament in 2013! The one used to silence the opposition and their rallies, whenever and wherever needed. So that the Police Force can assault and detain without any issues, not even use the Penal Codes or former colonial laws to arrest someone.

So the Police Force, together with Mambas, whole Police convoys was driving him home in Kasangati, as the whole day was in the hands of the Police. This all done without any issue of law or recognized criminal attempt of the opposition leader. Except for putting fear into the Movement and the Police Force loyal to him.

Yet, again the State doesn’t care about justice, freedom and liberty. There are clearly violations of these as the draconian law are now used to stop Dr. Kizza Besigye from campaigning for land reforms, as the land grabbing are happening rapidly. Peace. 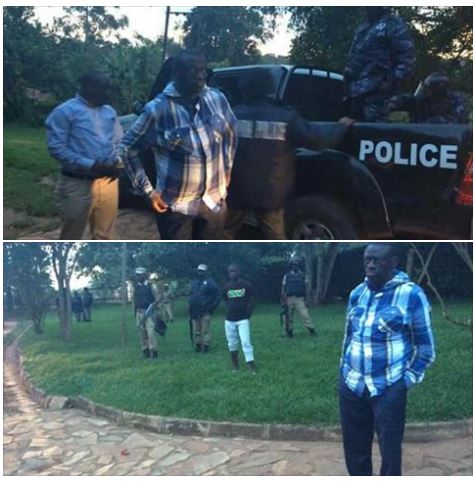