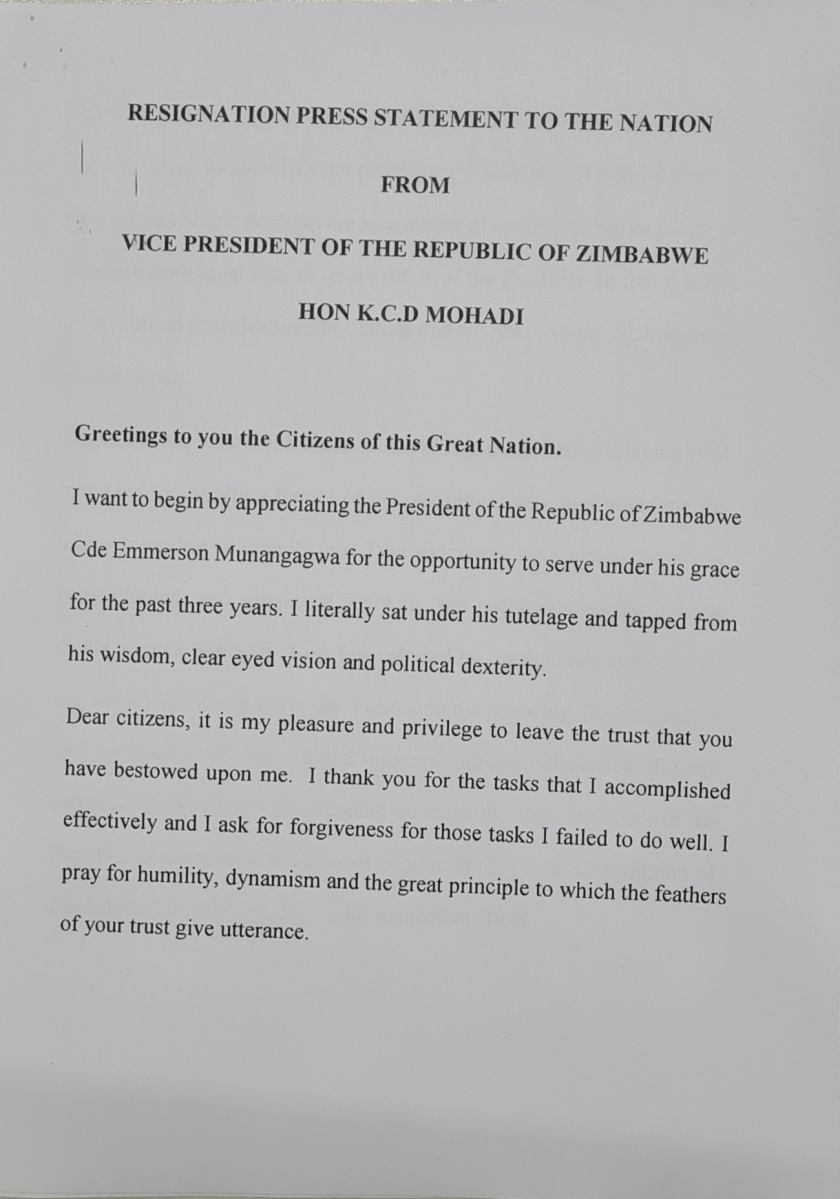 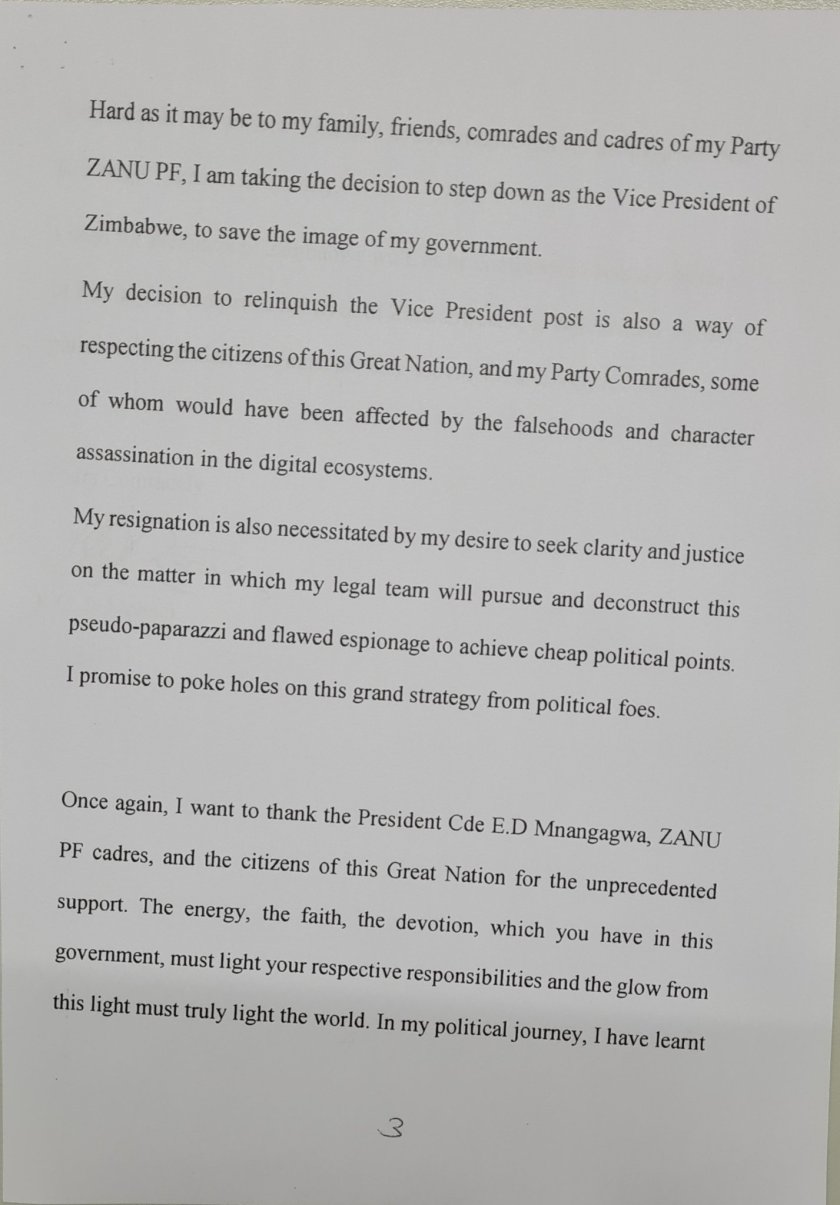 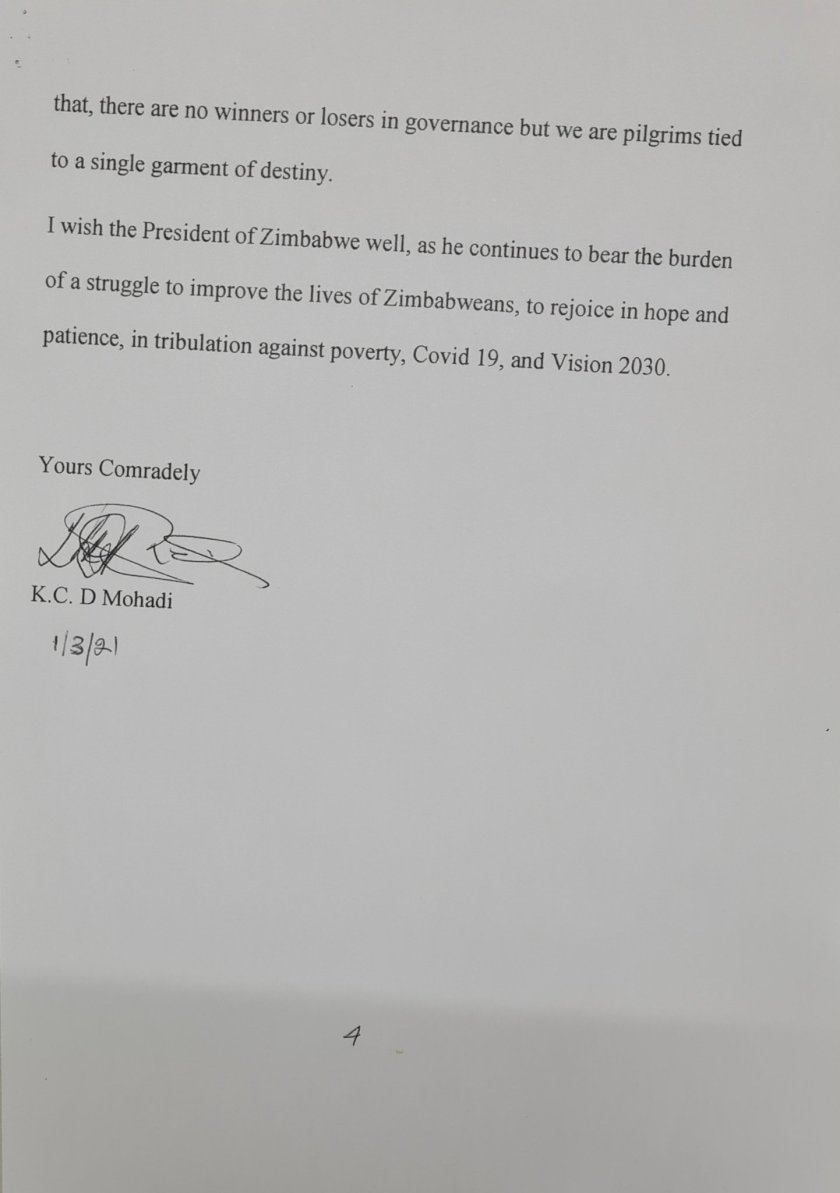 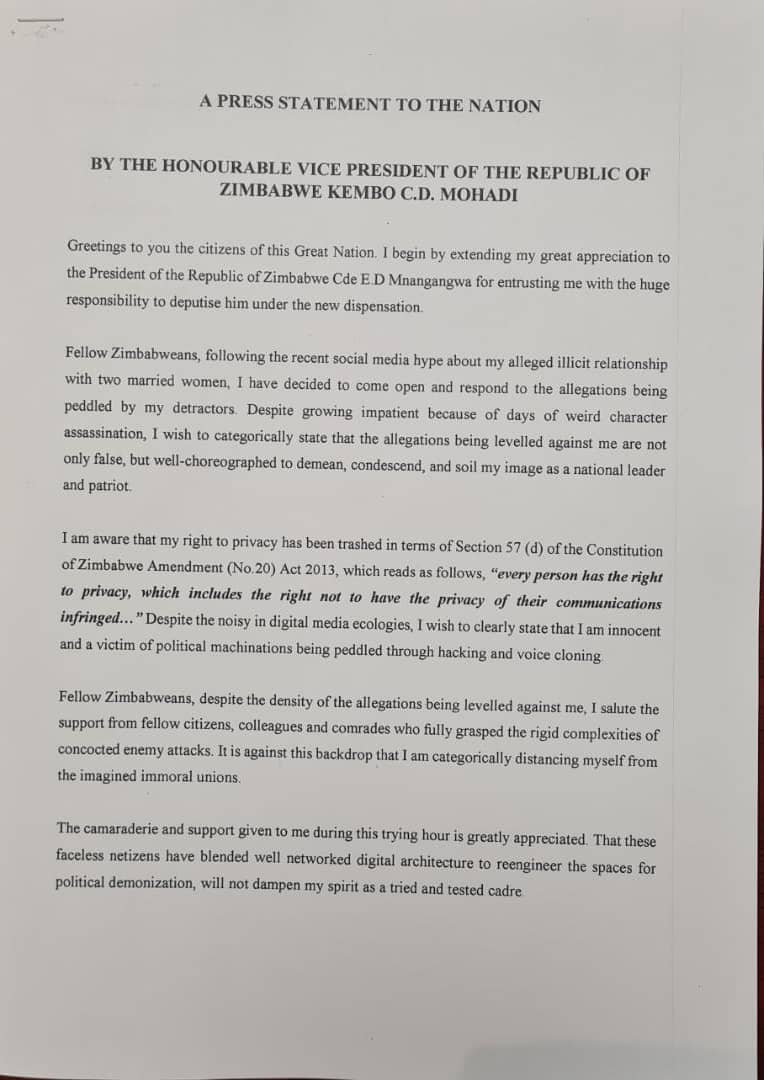 We know that this world can be rough. We know that there are dangers in this world. There are the good guys and the bad guys. You have the hustlers, the pimps and the gentlemen. You never know who you meet and what posses the person that you meet. However, there are some ground rules to this here game.

Vice President of Zimbabwe Kembo Mohandi will go down as a pimp. He is the P.I.M.P and was inspired by 50 Cent and G G G Unit. Who knows, maybe he listed to Too $hort and E-40. Whatever he did. He surely thinks more with his pecker then with his head.

There are now four different woman who has affairs with the VP. Some of which was already married. One student who got paid of her tuition, if she slept with him. Another one he wanted to have in the office and another one he wanted to do stealth or raw. This old man has no scruples when it comes to sex. He just wants to go down and doesn’t care as long as he gets a sympathetic crotch to cry on.

I would expect this of a younger man. A man who is a student and has nothing to lose. A man who is just trying to score as much as possible. This is some pimping shit. However, the VP has an office and is supposed to have integrity. It seems he uses the office to allure woman and with his position get into their pants. It seems like he loves the attention and only seeks for comfort in sheets and nothing else. He is acting like a predator and a sex-addict.

He seems like his more focused to score, than to govern. This for a man in this high position and office. A Vice-President isn’t something easily to go by. You shouldn’t get there on limp, but because you have abilities and capabilities to govern. However, this man seems focused on banging chicks by any means possible. Kembo wants to be the PIMP.

This man wants to be known for his side-dishes. The VP wants to be apart of the click of Uncle Snoop and the Dogg Pound. We just know that. That is how we can perceive his actions. The phone-calls and his attitude. It is all about hitting the third-base and calling it a day’s work.

We can wonder how many more woman will come out of the woodworks. How many more woman he has done this too and if it will ever have consequences. Because, he clearly only sees woman for one thing. It isn’t to build relations, but to drop a load-off. He just wants to skeet-skeet-skeet and move-on. Like the PIMP he is. That is not what you expect of his rank or his office. No, we expect more, but that seems too much to ask. Peace.

One of the Vice-Presidents of Zimbabwe Kembo Mohandi have gotten into a pickle. The old man of 71 years is clearly vigorous. As the leaks of phone calls with his “lovers” been released to the public. Surely, the VP didn’t wanted this out in the public. Someone dropped this to hurt him and maybe get someone else promoted or appointed in his place. Since this is making the old man looking “sexists” and “questionable”. The manner, which he spoke to the ladies in question is also showing his true character.

That he has affairs and sexual relations with people is usually personal business. However, when you are an VP there is other standards. Also, the manner, which these leaks have been released shows how he interacts with his “lady-friends”. As these are also married ladies as well. This shows that he doesn’t care or thinks because of his position that he got the magical stick. Since, the young ladies will throw themselves at him and he can enjoy the spoils. This seems like the thing of the VP.

Not that I am shocked that someone like the VP would use his position to get ladies. That is what men like he does. He get the perks of the office. VP Mohandi is not the first or the last. However, the way he spoke and did it wasn’t all that good.

That is why I’m just quoting the Constitution to prove what the VP has possibly violated it.

“(2)Vice-Presidents, Ministers and Deputy Ministers may not, during their tenure of office—

(b) act in any way that is inconsistent with their office, or expose themselves to any situation involving the risk of a conflict between their official responsibilities and private interests” (Constitution of 2013).

The VP should answer to this article, as it states a vital point for his office. That he shouldn’t have conflict between his official responsibilities and his private interests. We can surely question of making love at the office is a breach of his official responsibilities, as that is all his private interests. His privates are all active, while his using the public office to activate that. This is therefore not only a moral question. As he should answer and atone for his sins where he see fit. Since these woman are reported to be married already. So, this is infidelity, but that both has answer for on their own.

However, the cheating spouse is one issue on its own and if the VP is a cheating hubby himself. That is moral question, which is bad in itself. Nevertheless, the usage of the office and his position as a VP get laid is more worrying. That his searching for the honeypot and the fountain of youth. If not his searching to get his loads off. No matter what he does. He maybe should have been more careful and not as riled off.

Yes, people are busting his balls right now, but that is justified. The old man is a sexist and using his office to solicit sex. That says it all really. It should have consequences for him. Not just bust his balls. Peace. 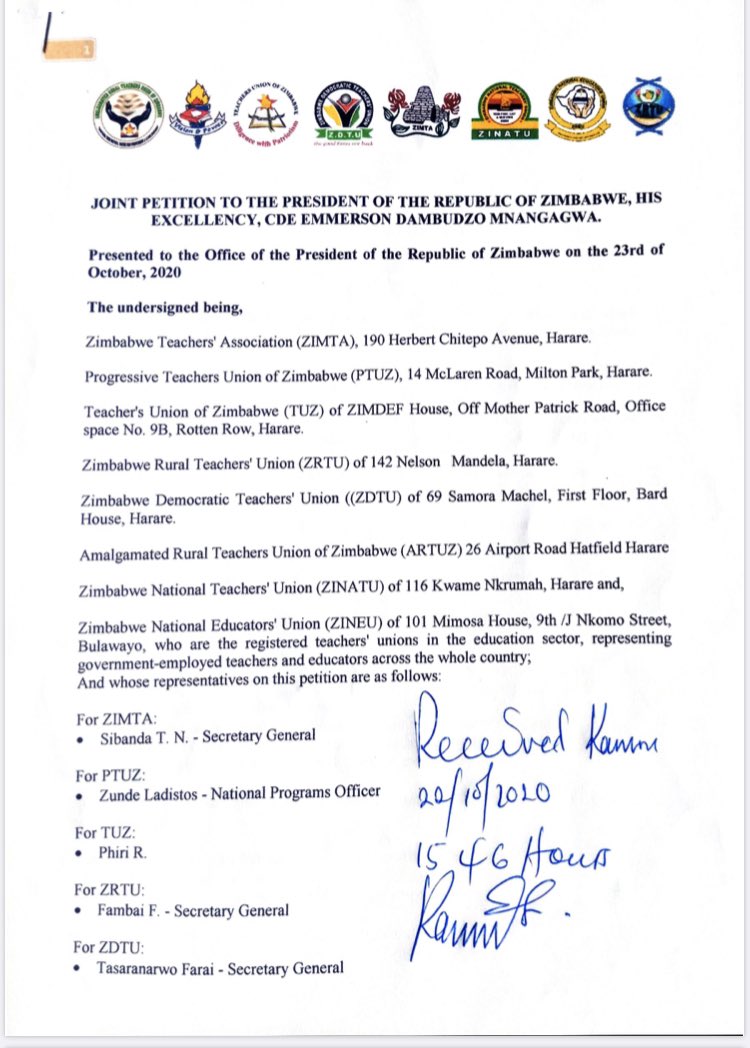 “People call us junta, the President (Emmerson Mnangagwa) is a war veteran, Vice-President (Constantino) Chiwenga is a soldier, I am a soldier, (Housing) minister (Daniel) Garwe here is a soldier and we will rule not minding what the media says. We will continue to rule. Civilians will not” (…) “Those of you who are like dogs barking at the rising moon, you can come back home because the moon will continue rising. There is nothing wrong in coming back home” – Vice President Kembo Mohandi on the 16th October 2020 (Newsday.co.zw – ‘Junta here to stay: Mohadi’ 17.10.2020).

Vice-President Mohandi revealed and said things straight-forward. So, the Zimbabwe African National Union – Patriotic Front (ZANU-PF) is saying what people are saying about it. It is a military enterprise with military leaders. The government is a junta and they are not claiming to be otherwise.

This is not shocking, the other VP is acting like the government is an army. It is Command Government. It is Command Fasting, Command Agriculture and Command Health Care. ZANU-PF is not hiding it anymore.

We knew that the military took over during the Operation Restore Legacy. This has been known and clearly they have more control, than they wanted to tell in the beginning. However, with the years now and security. The gloves are off and the big-guns are now secured.

That Kembo Mohandi is saying this now. Shows that they are not fearing anything. They are just initiating, that the army will control the state and not have a civilian government. This is why the governance and transparency will be lacking. Since, they are all following chain of command and not listen to civilians.

When you put a government like this in power. You should expect impunity. An armed government who work with military means. Will not respect the citizens, but force themselves on people. It will use soldiers and police officers to intimidate the public. If you disagree, you will meet the authorities, because your supposed to obey the chain-in-command.

There is at least not any question anymore. The ZANU-PF is a junta, a military government and they not a civilian one. They are willing to overstay and not respect elections or the will of the people. Since, they have the weapons and the army behind them. Peace. 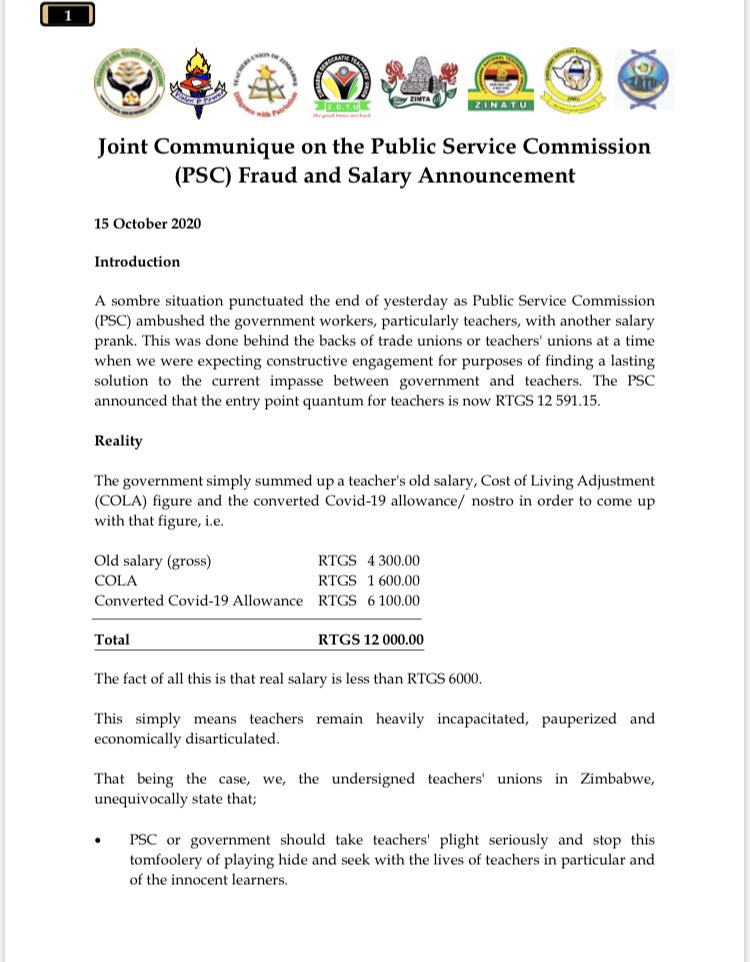 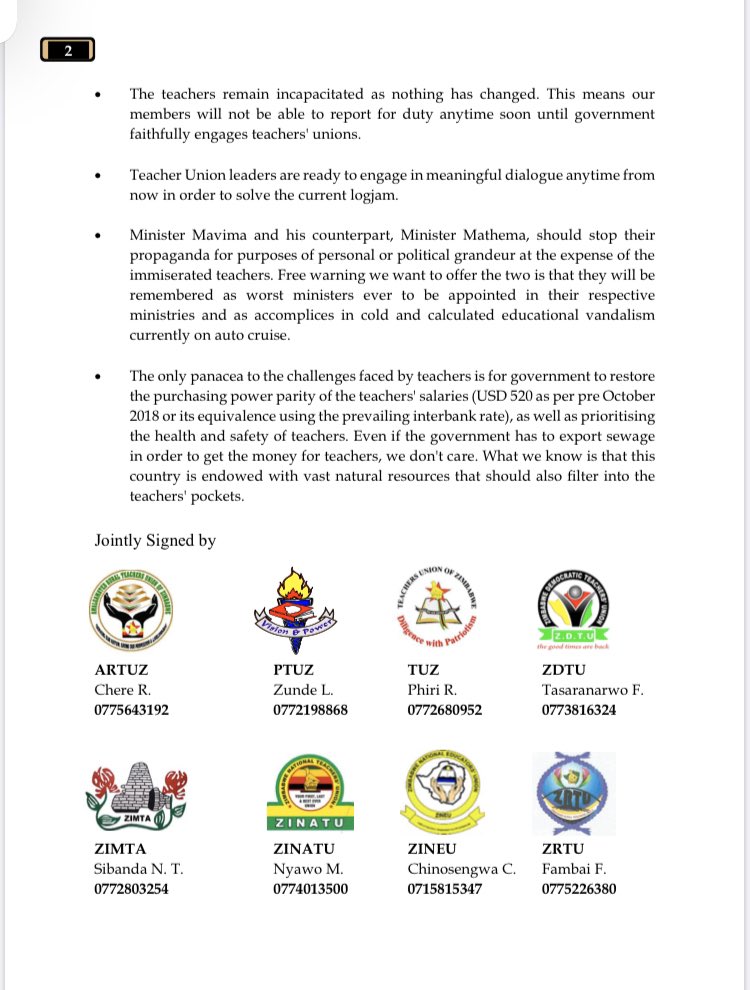