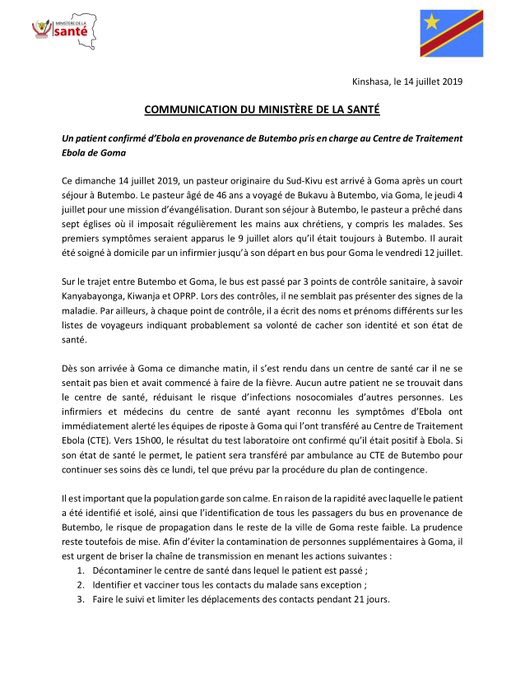 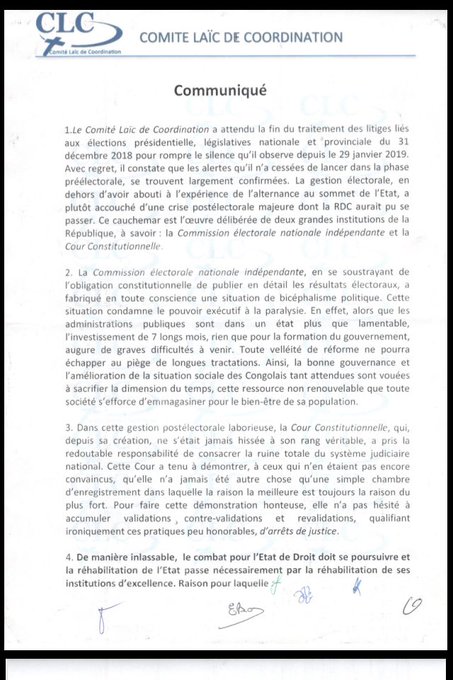 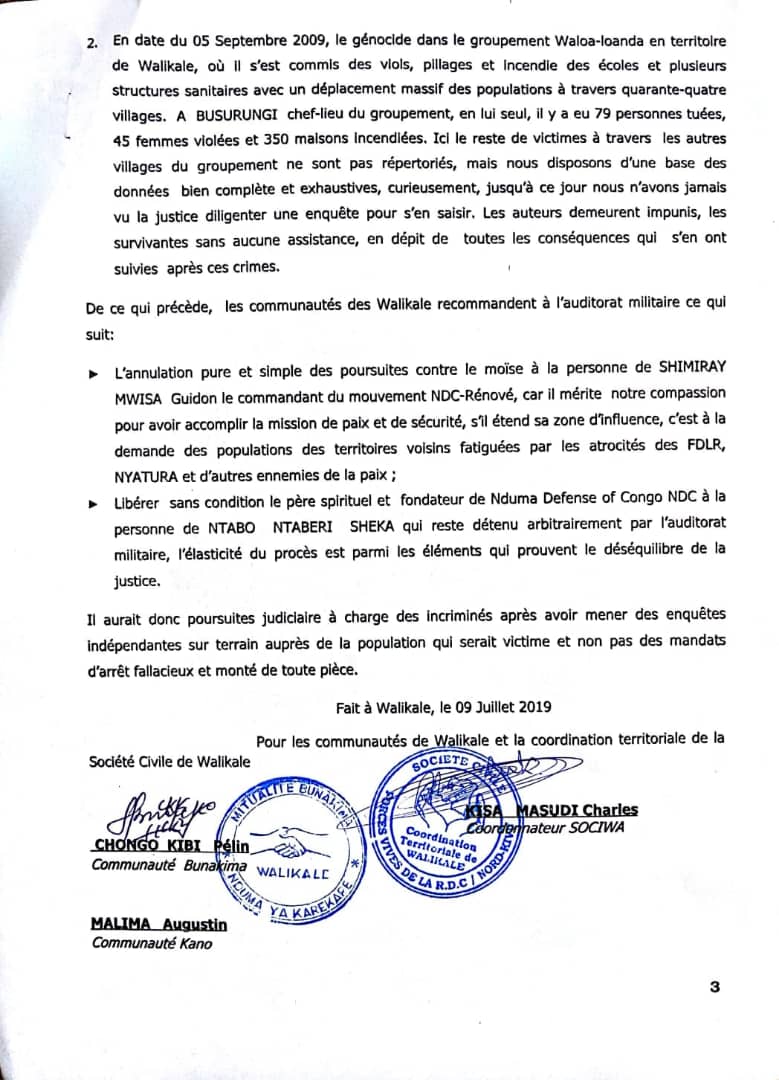 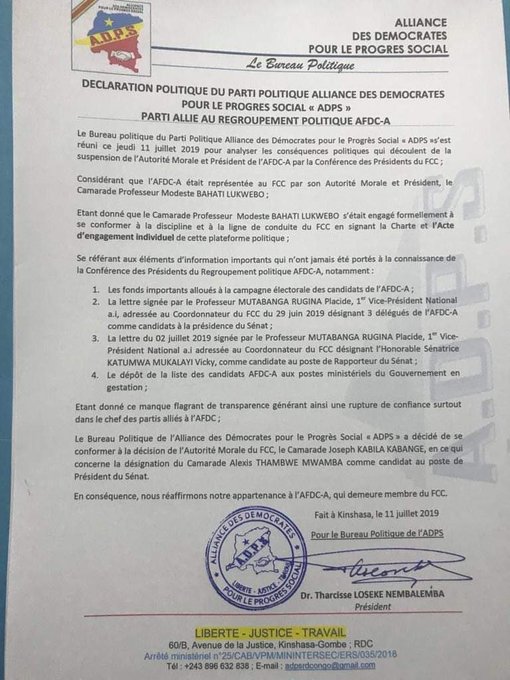 After the first reported case in the Ariwara Health Zone on 30 June, no new cases have been observed in that health zone.

GENEVA, Switzerland, July 12, 2019 – The outbreak of Ebola virus disease (EVD) in North Kivu and Ituri provinces, Democratic Republic of the Congo continues this past week with a similar transmission intensity to the previous week. While the number of new cases continues to ease in former hotspots, such as Butembo, Katwa and Mandima health zones, there has been an increase in cases in Beni, and a high incidence of cases continues in parts of Mabalako Health Zone. In addition to these re-emerging hotspots, there are a large number of people with confirmed and probable infections moving to other health zones, with the greatest number coming from Beni Health Zone. The movement of cases causes the outbreak to spread to new health zones and re-emerge in health zones with previously controlled infections. Overall, this underscores the importance of robust mechanisms for listing and following up contacts and understanding the motivations for peoples’ decisions to move.

After the first reported case in the Ariwara Health Zone on 30 June, no new cases have been observed in that health zone. A response team deployed to that zone continues to identify contacts, engage the community, and vaccinate individuals at risk. Response personnel from the bordering countries of Uganda and South Sudan continue to support operational readiness activities. Resources are being dedicated to monitoring the Uganda-Democratic Republic of the Congo border in that area.

Cases continue to increase among health workers, with the cumulative number infected rising to 132 (5% of total cases). Of the 128 health workers with information available, the greatest proportion is among health workers at health posts [poste de santé] (20%, n = 26) and private health facilities (35%, n = 45). The majority (68%, n = 87) of health worker infections were among nurses.

No new EVD cases or deaths have been reported in the Republic of Uganda since the previous EVD Disease Outbreak News publication on 13 June 2019. As of 3 July, 108 contacts exposed to those cases were identified, and they all completed the 21-day follow-up period. All contacts were asymptomatic. Arua district, located in the north-western part of Uganda near the Uganda-Democratic Republic of the Congo border, is currently stepping up its response readiness to prevent imported cases of Ebola following the case that died on 30 June 2019 in Ariwara Health Zone in neighbouring Democratic Republic of the Congo, located 8 kilometres from the Uganda border. This case is known to have over 200 contacts, some of whom are in the communities bordering the Arua district. As of 9 July 2019, two suspected cases in the Arua district were reported and both tested negative. As of 9 July 2019, the cumulative number of individuals vaccinated in Arua district is 811 out of 1092 targeted front line and healthcare workers.

ITURI, Democratic Republic of Congo, July 12, 2019 –  Health workers are urgently rolling out a complex measles vaccination campaign targeting 67,000 children in Ituri, northeast Democratic Republic of the Congo (DRC), a region ravaged by armed conflict that is now also the hub of the second-deadliest Ebola outbreak on record.

At least 1,981 deaths due to measles have been reported across the DRC this year, over two-thirds of them among children below 5 years old. As of 23 June, nearly 115,000 cases of suspected measles had been reported, far more than the 65,000 recorded in all of 2018.

Ituri, one of the two provinces (the other is North Kivu) struck by Ebola since the outbreak began nearly a year ago, has recorded over 5,400 cases and 50 deaths.

“The combined threat of Ebola and measles for the thousands of families living in overcrowded and unsanitary displacement camps is unprecedented,” said UNICEF DRC Representative Edouard Beigbeder. “We have a small window to prevent a potentially massive loss of life.”

The first sites targeted for measles vaccinations are four displacement camps in Bunia, Ituri, that have seen a huge influx of families forcibly uprooted by fighting in recent weeks. The boundary of one camp, located alongside Bunia’s General Hospital, is less than 100 metres away from an Ebola treatment center. It is also less than 3 kilometres away from parts of Bunia that have seen 5 Ebola cases since the start of the outbreak, 2 of them in the past three weeks.

The Ebola outbreak means the measles vaccination campaign must incorporate extra measures to protect against infection and meticulous triage. Health workers will need to wear gowns to prevent contact with blood or other body fluids. Teams will include an additional health worker who will evaluate and refer suspected Ebola cases, check temperatures and oversee handwashing and other safety measures.

An additional layer of complexity is that some of the early symptoms of Ebola – fever, redness around the eyes, diarrhoea – are virtually indistinguishable from those of measles, malaria or cholera – all of which are prevalent, especially in severely congested displacement sites.

Up to 400,000 people are thought to be internally displaced across Ituri, the vast majority of them women and children. Many live in about 35 camps scattered throughout the province, in territory that is virtually inaccessible due to insecurity. Fighting among various armed groups has damaged or destroyed up to half the health facilities and schools in the province.

“The northeastern part of DRC is home to one of the worst humanitarian crises today. Whether it is from measles, Ebola, or the reality of living in a displacement camp, children are at grave risk. We must do everything we can to protect them,” Beigbeder said.

Measles campaigns are also being planned for Tchomia and Nyankunde health zones.