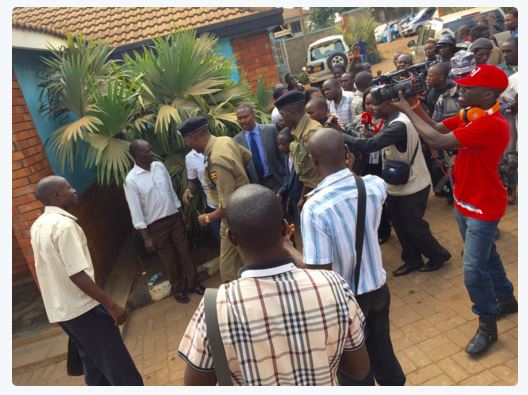 We can forget to validate the tallying that comes from Namboole today as Badru Kiggundu talks about the final fixed result on Saturday or Sunday. As the Electoral Commission is working under fire from Mzee, as he can’t live with the will people, therefore he is still enforcing militarization of politics as the Police and Army is busy detaining Dr. Kizza Besigye and other FDC “big-men” while sieging FDC HQ and sieging Hon. Amama Mbabazi house.

While the disturbing relentlessness of releasing numbers from the Electoral Commission and also losing of declarations forms in certain districts, and that tally numbers coming from places where the votes hasn’t even been casted. While the Police and army spreading fear in the public while the EC is cooking the numbers to fix the NRM. We know what you do and while your sweeting in the offices and wonder how you will switch the tallies and how many votes you have to pre-tick ballots or calling them. 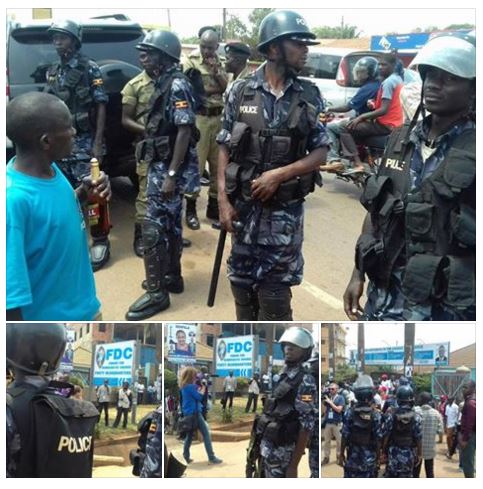 As Dr. Kizza Besigye is set under house arrest today following the findings of a pre-ticking operations for President Museveni, something nobody should find as they are close knit and tightly incorporated with government facilities and organizations as the Police and NRM-Regime knows all about it.

Today the continuation of Police Force is working against the FDC as they have put the FDC headquarter in Najjanankumbi under siege and even raided the offices as the FDC has put up another Talley Center as the official ones was giving out numbers to sustain President Museveni and stifling votes. Something the Police could not handle at this present state of affairs. The leading operator is Andrew Felix Kaweesi from the Police.

Later as the escalating offences of the FDC, as they question the numbers coming from the Electoral Commission at this point; the siege of the offices is not enough. As the Youth of the area start to demonstrate as of the siege of the FDC Offices closure; this leads into the police shooting live bullets and tear-gas towards the demonstrating youth. They even used a helicopter to throw tear-gas into the compound of the FDC office. (That is some Hollywood kind of actions that would make  Michael Bay proud – Mr. Kale Kayihura!). 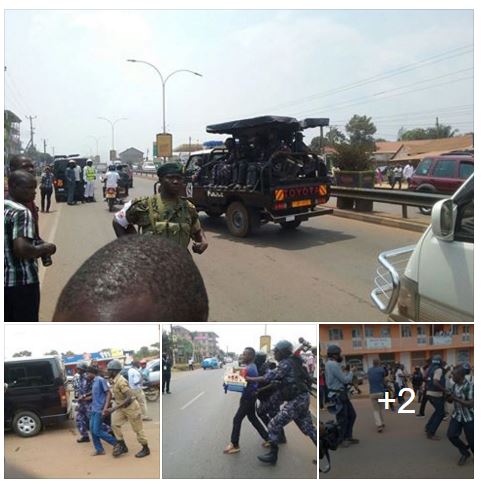 The Demonstrating Youth also stood and carried out the demonstrations on the Entebbe Road in Kampala as the youth doesn’t accept the siege of the FDC HQ. Police’s Director of Human Resource Development Andrew Felix Kaweesi says they are there to ensure FDC does not announce illegal election results. As the Police is shutting down the demonstrations they has also help from the Army. The Military Police is also at the spot drilling the bullets and tear-gas at the FDC HQ as the siege is continuing.

And yet again Dr. Kizza Besigye was arrested at the FDC Headquarter and taken to an unknown location again. Together with Dr. Besigye the other main FDC figures being arrested by the Police today are Gen. Mugisha Muntu, Ingrid Turinawe and Wasswa Birigwa. They have been arrested for keeping a parallel Tally Center! The UPF and IGP Kayihura can you do this?

“Plumes of thick black smoke spiral into the air and the crowds start to run. Some are dressed in sleeveless red university graduation gowns, others carry leafy tree branches to symbolise a past war. They are not all students, but they do all want the same thing: to see President Yoweri Museveni relinquish power to Kizza Besigye” .

There is also reported demonstrations in Mengo and in Kisenyi in Kampala. The Police is shutting it down with tear-gas and bullets, as the public throws stones at the Police (93.3. KFM Radio, 19.02.2016). There been also reported shots fired in Katwe and Kololo and petty vile photoes from the streets are coming in social media. That I don’t have the stomach to deliver.. as the Live bullets and tear-gas hurt the public! 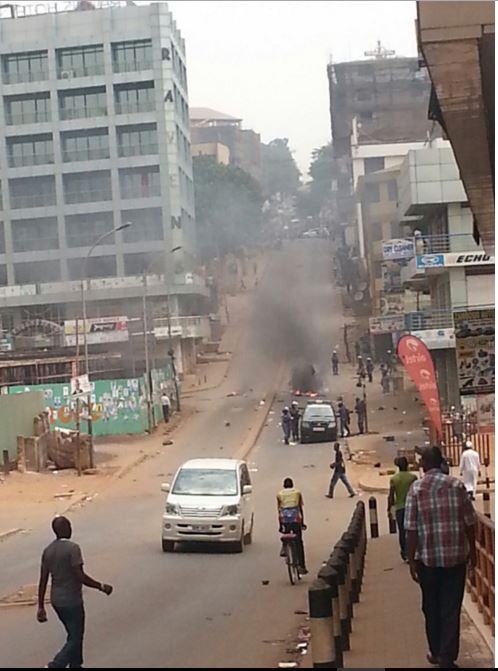 The latest news broadcast by 93.3 KFM at 3:03 p.m. spoke of “a lot of rampage” at Kasangati and Kawempe although the Kiseka Market area had calmed down a little by 3:00 p.m., with all the shops closed (Kampala Express, 19.02.2016).  In Kiseka Market the Police has shot two people and the picture is spreading online as the victims lay on the streets. a sad sign of the violence of the state and the regime!

Also ordinary people are taken to be detained as they are in the area and demonstrate to the regimes shut-down of the FDC party officials and its headquarter. This here can only be under order of Mzee. 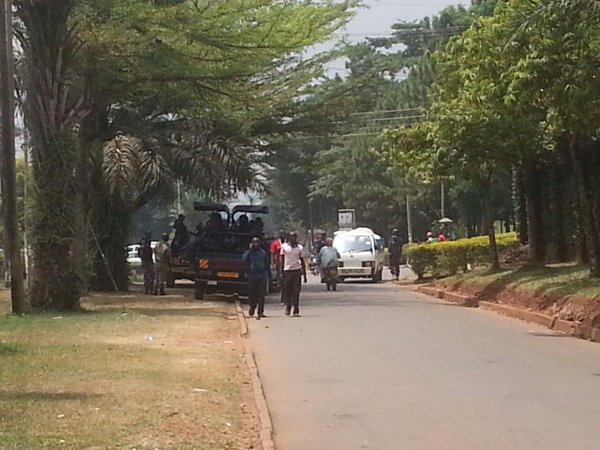 As other opposition leaders usually is safe. Hon. Amama Mbabazi house is set under house arrest as his home is sieged by the Uganda Police Force and the Army as he is such and threat to the ruling regime. It seems… As that happens at the same time some Polling Agents storms his house demanding pay for guarding his votes!

“This afternoon, police vehicle with Field Formation Unit officers arresting anyone that was outside my gate. They were also accompanied by military police. I am yet to find out why” (Mbabazi, 19.02.2016). 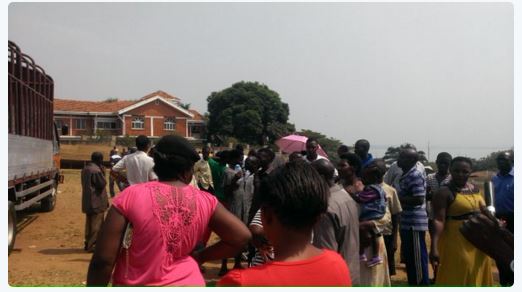 Continue of Voting in Kampala:

In Kampala where certain voting has restarted today after the delays of material yesterday as for instance in Gaba, where the demonstrations and anger towards the Polling station occurred. The voters who are named in the Category S-Z are not allowed to vote at the polling stations. (Me asking, so they are the already pre-ticked ballots then?).

At Ggaba Trading Centre the polling station opened today as well because of yesterday’s delays. While this happen though. The Polling station got material, but not the voting material for presidential elections.

In other parts of the Country: 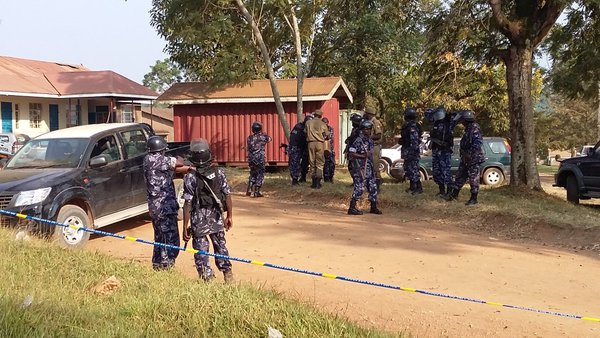 In Masaka the Police have started to have heavy deployment around the Talley Center of the town. In Kasese the police has shot tear-gas into the Talley center in the town.

In Nebbi where President Museveni is busy supervising the distribution of Hoes to the public as a appreciations of the voting yesterday. So subtle Mr. President!

Suspicious of rigging, here is reasons why:

In Rubavu in Western Uganda, a government official was caught with pre-ticked ballots for President Museveni. While in Bundibugyo where the presiding officers of the elections and their declarations forms goes missing (The Observer, 19.02.2016). In Bulambuli the results from 6 Polling Stations, Returning Officers claim the Declarations Forms was stolen from the Polling Officers yesterday (The Observer, 19.02.2016). In Sembabule where at certain polling stations yesterday there wasn’t even voting yet, as “at Kirama, Ntusi Primary School, Kazooma A, Lwemibu, Mageege Kinoni all had result 4 tallying even tho they didn’t vote yesterday” (The Obsever, 19.02.2016).

What is some other Presidential candidates up to?

“Presidential candidate Abed Bwanika has been intercepted at Mutukula border by Ugandan security while trying to sneak into Tanzania. He is now being driven back to Kampala, reports indicates” (Red Pepper, 19.02.2016).

He has yet again been sent home to his home in Kasangati by the Police. Right now this is unconfirmed. Have no information on the other “big-men” and detained FDC Officials or public around Kampala that the Police has taken in today. While this reports has been taken back. He is not yet home. Dr. Kizza Besigye and the other FDC Officials are detained in Nagalama Police Station as we speak! He was never home in Kasangati after taken from FDC Headquarter. Winnie Byanyima confirms that he is detained together with the other FDC officials, and not yet escorted home!

I think this is enough for now. More to come as the events unfolding in amp speed right now! There is certainty that the NRM-Regime works hard to suppress the will of the people and the change of power as the siege of opposition is a proof of! There is vicious attempts to destroy democratic values again from the authorities and doesn’t seem to seek the truth. The Police, Military Police and the Army is deployed heavy and guns around as the fear and tension is sky high. Peace.