Uganda: Woman’s March dispersed by Police – As activists fights for the plight of the kidnapped woman! 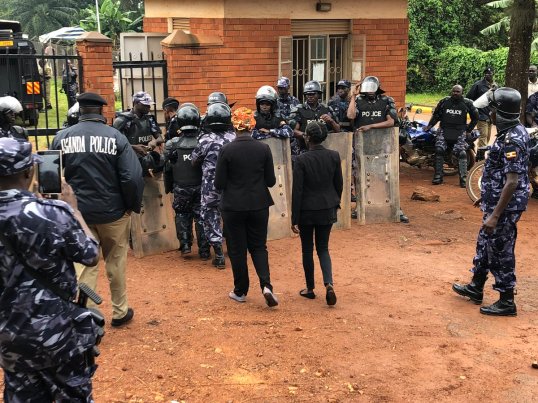 Today was a day activists and especially Dr. Stella Nyanzi had a Woman’s March in Kampala. Going to the Inspector General of Police John Martins Okoth Ochola at the Police Headquarters to demonstrate with coffins to show the ignorance and the lack of care for all the kidnappings of woman in the Republic. Clearly, the Police Force was acting it is has done before. Instead of going into dialogue with the protesters. They went into warfare and skirmishes. As this little group was whisked away and the house of the IGP was shielded like a fortress with Police Officer in Anti-Riot Gear.

Some called this the Woman’s March, other in the slogan of Woman Lives Matters. 7 Activists was taken today, even some whose part of Chapter Four Uganda. Who also was protesting today. This shows that the National Resistance Movement (NRM) proves they are not there for freedom, liberty or even freedom of speech. As they are not allowed to speak up against the kidnappings.

All these activists was arrested with unlawful assembly and left on bond after being arrested earlier in the day. This was not at the same place as the demonstration. They were all taken to Jinja Road Police Station. That is typical of how these police officers works, as they usually does the same. To take the leaders from the protests and marches, even political rallies and drop them off further away. So the rest of leadership has to leave the premises and try to get them out on bond. As simplistic tactic to disperse the protesters.

They we’re peacefully walking to the Police Headquarters to deliver a letter and the police went all out. With all their gear and massive spark of outrage. They went into this with peaceful means. They came with coffins and a letter. To prove their point of the fragile lives, that is taken away and that the rampant kidnappings. This is happening a year after the deaths of woman in and around Entebbe. Which still is left unresolved, as the matter is on print. There is so many cases so many lives taken by the criminals and left played around.

That is the insecurity the NRM was supposed to fight and create. Instead it has gotten worse with time. The proof of with the rampant kidnappings and the deaths of innocent civilians. That is what it all boils down too. The demeaning way people are losing their lives, innocent woman who are just disappearing like garbage. When they are equals, citizens who has rights to justice and rule of law. Who are supposed to be protected and secured by the Police and other Security Organizations. The lack of that create a vacuum and the need for protest comes.

The need for organizing marches and question the powers for their lack of care becomes needed. Because the state isn’t answering to the plights of these people. They are left alone until they vanish, goes away and never returns. Used as pawns and used as bargaining chips to get a pay-off. That is what is happening. Peace.