Well, today I am back into history. It’s kind of an important day today. The Prohibition era lasted from 1920 until the 21.Amendment of 5. December of 1933.

“At midnight, January 16, 1920, the United States went dry; breweries, distilleries, and saloons were forced to close their doors” (DigitalHistory)

“Between 1905 and 1917, states across the nation were imposing laws that prohibited the manufacture and sale of intoxicating beverages. They did not stop there, however. The temperance societies began to push to change American society and elevate morality through national legislation. In 1917, the House of Representatives wanted to make Prohibition the 18th Amendment to the Constitution. Congress sent the amendment to the states for ratification, where it needed three-fourths approval. The amendment stipulated a time limit of seven years for the states to pass this amendment. In just 13 months enough states said yes to the amendment that would prohibit the manufacture, sale, and transportation of alcoholic liquors”(National Archives).

“It was on January 20, 1920 when the 18th Amendment to the Constitution took effect. This amendment prohibited the production, manufacture, and sale of alcoholic beverages within all the states and territories of the U.S. The 18th amendment was the outcome of the decade-long temperance crusade, which aimed to end the dilemma of alcohol consumption in the country” (TotallyHistory).

“Prohibition has made nothing but trouble” – Al Capone

“Enforcing the law proved almost impossible. Smuggling and bootlegging were widespread. Two New York agents, Izzie Einstein and Mo Smith, relied on disguises while staging their raids–once posing as man and wife. Their efforts were halted, however, after a raid on New York City’s 21 trapped some of the city’s leading citizens. In New York, 7,000 arrests for liquor law violations resulted in 17 convictions (Digital History)”

“Prohibition was difficult to enforce, despite the passage of companion legislation known as the Volstead Act. The increase of the illegal production and sale of liquor (known as “bootlegging”), the proliferation of speakeasies (illegal drinking spots) and the accompanying rise in gang violence and other crimes led to waning support for Prohibition by the end of the 1920s” (History.com).

“You walked into a bar on lower 3rd Ave. There were nine people in the place. A venerable bartender stood with folded arms, looking at the wallpaper.

“Brandy and soda? Yessir. No, the crowd’s nothing extra tonight. In fact,” he says confidentially, “it’s very slow tonight. Must be the rain” (HistoryLink) 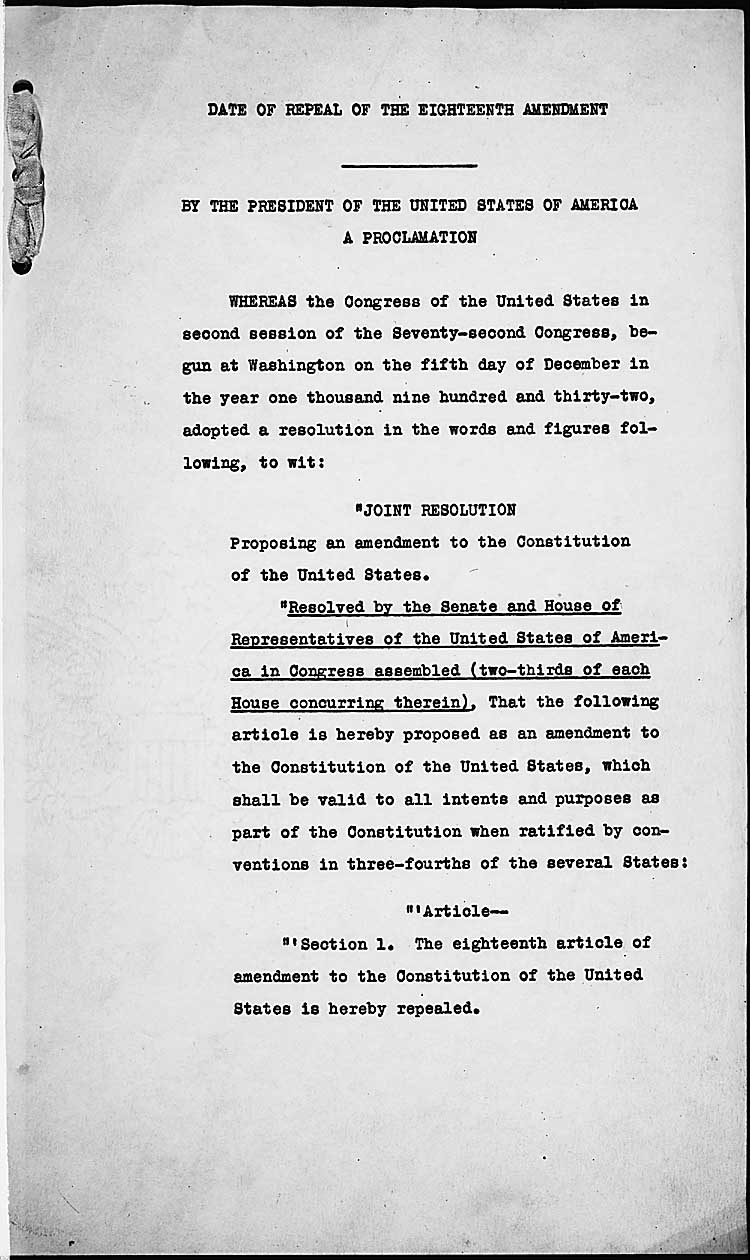 TotallyHistory – ‘21st Amendment to the Constitution’