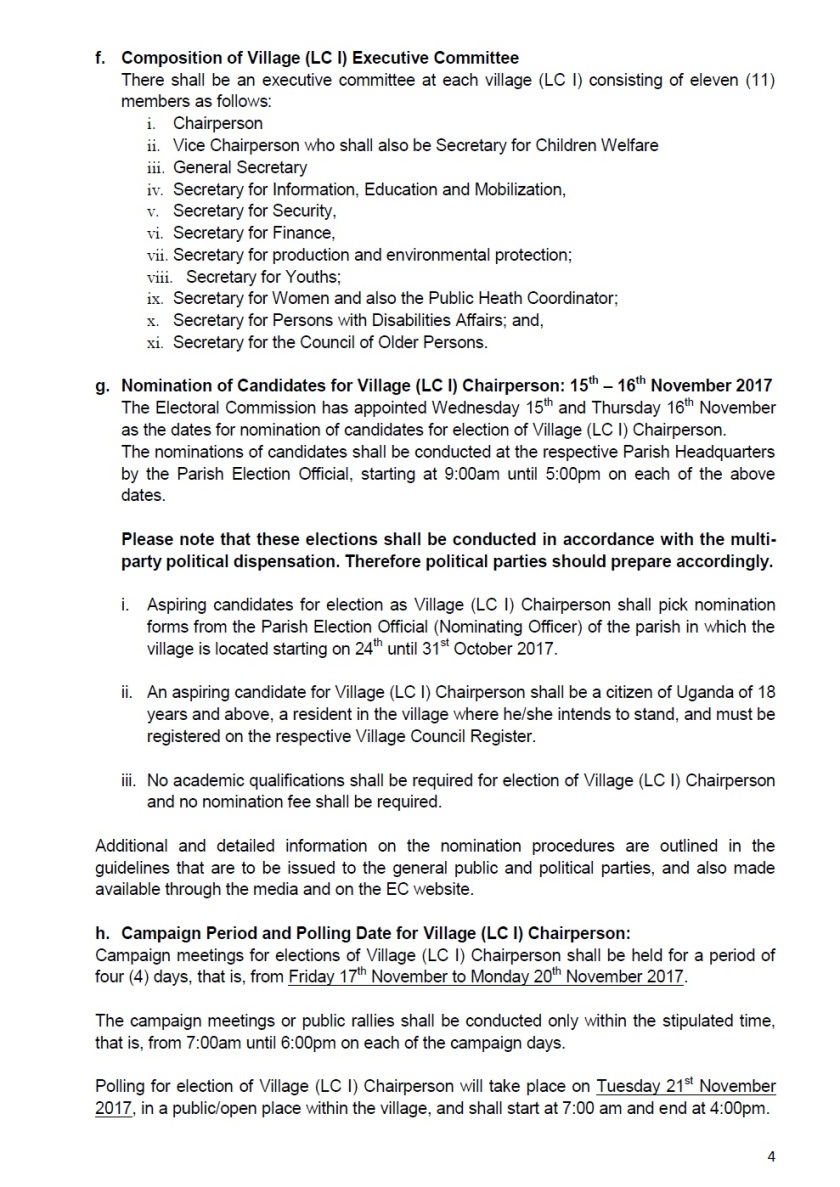 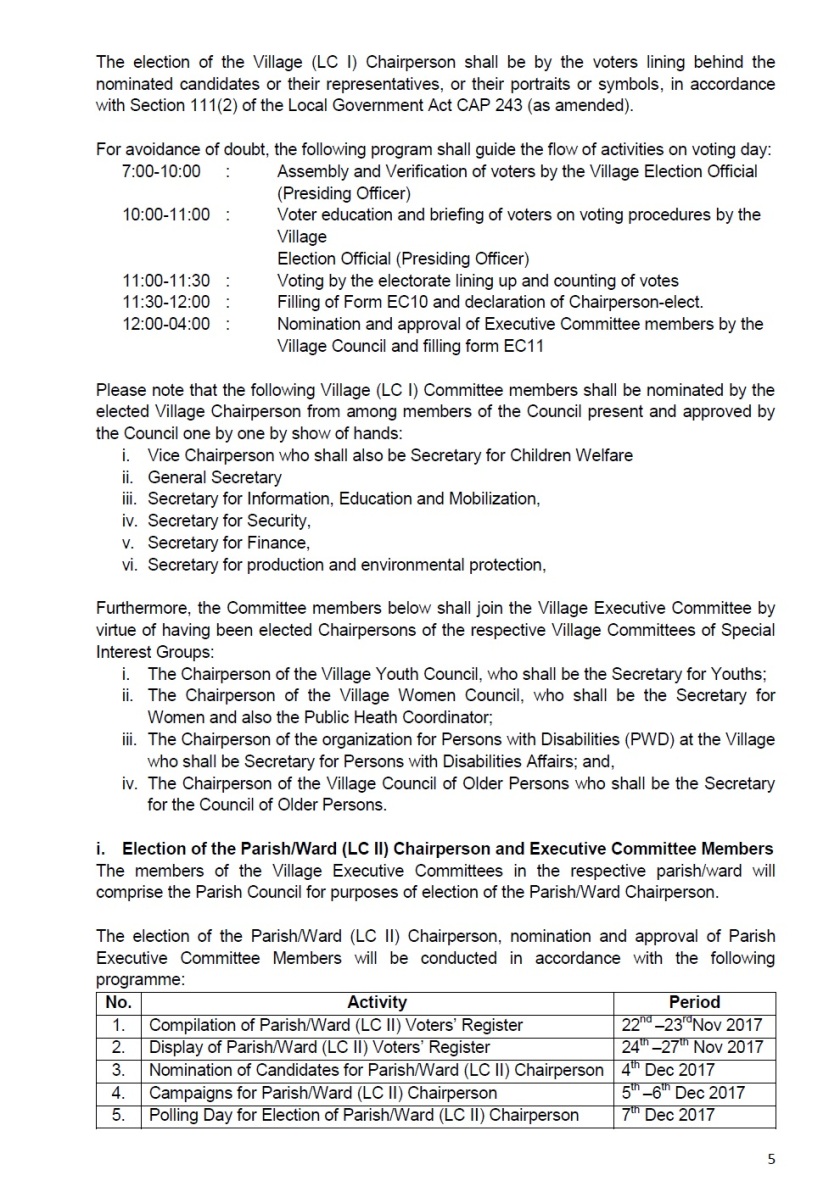 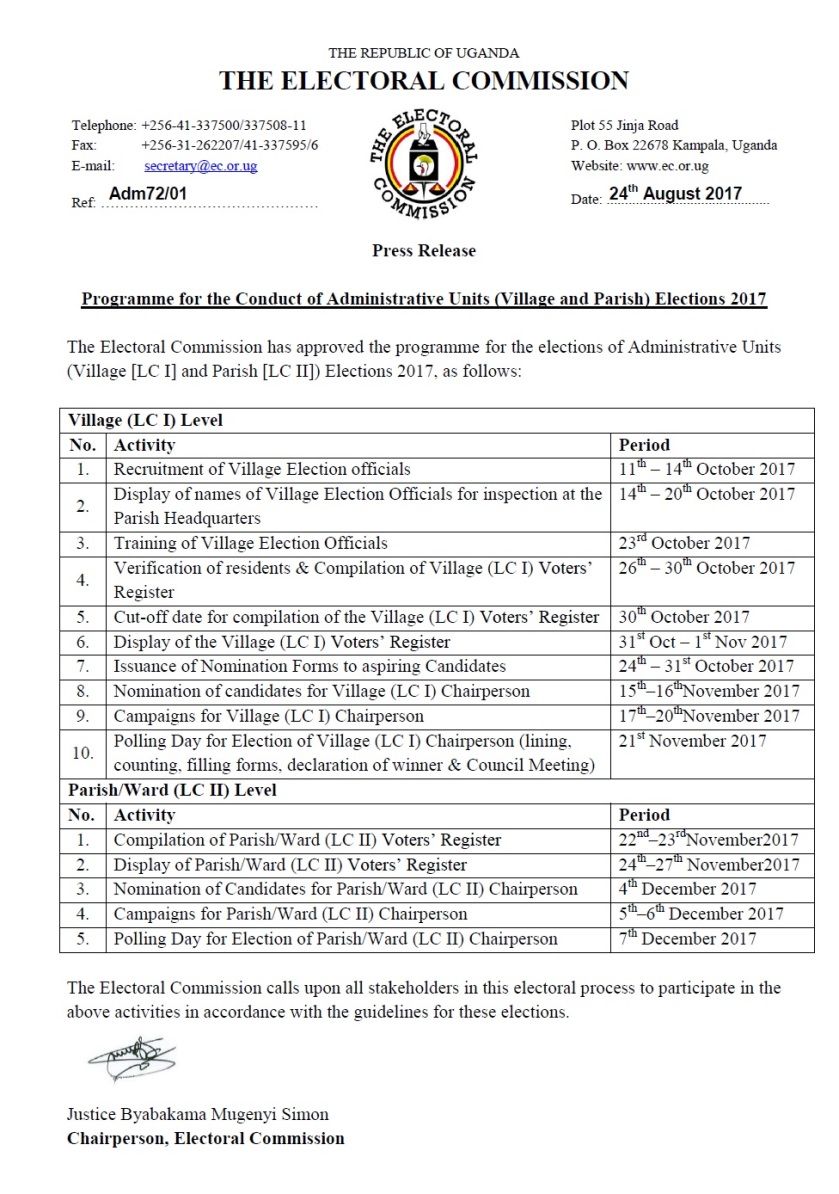 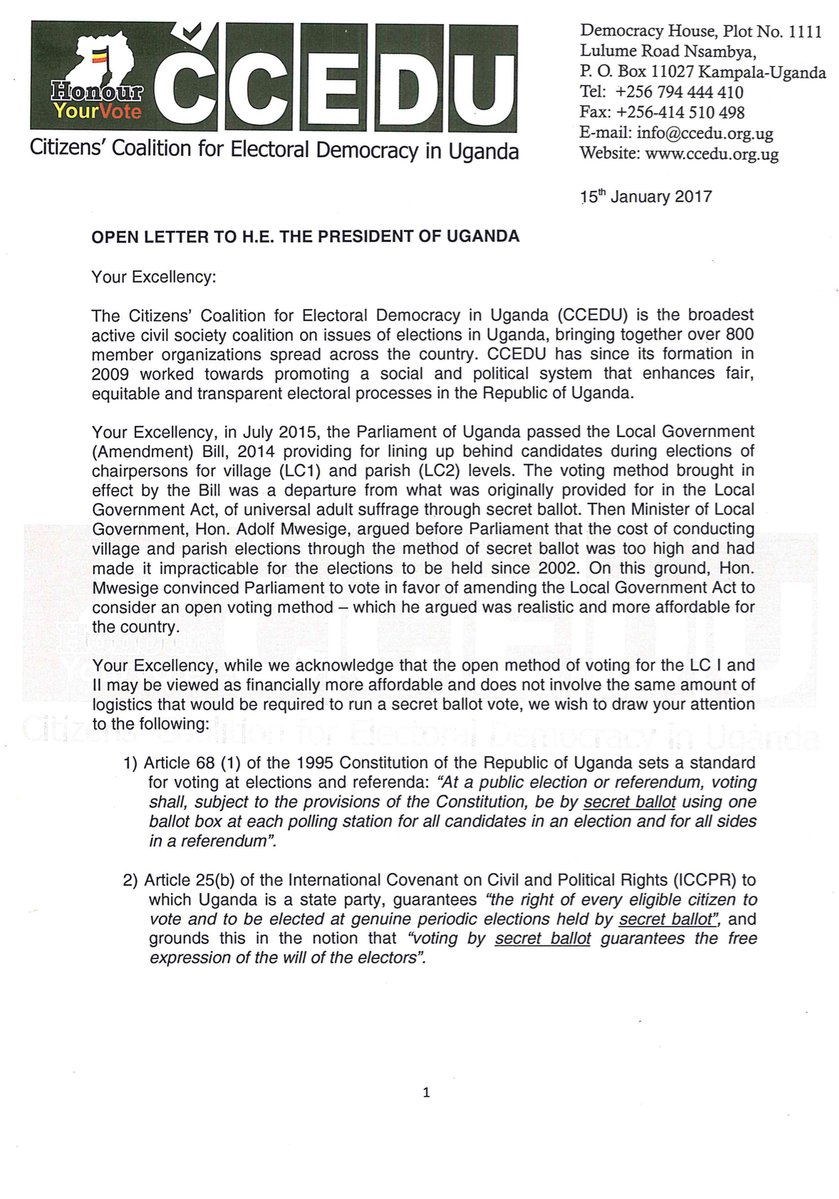 The Citizens’ Coalition for Electoral Democracy in Uganda (CCEDU) is the broadest active civil society coalition on issues of elections in Uganda, bringing together over 800 member organizations spread across the country. CCEDU has since its formation in 2009 worked towards promoting a social and political system that enhances fair, equitable and transparent electoral processes in the Republic of Uganda.

Your Excellency, in July 2015, the Parliament of Uganda passed the Local Government (Amendment) Bill, 2014 providing for lining up behind candidates during elections of chairpersons for village (LC1) and parish (LC2) levels. The voting method brought in effect by the Bill was a departure from what was originally provided for in the Local Government Act, of universal adult suffrage through secret ballot. Then Minister of Local Government, Hon. Adolf Mwesige, argued before Parliament that the cost of conducting village and parish elections through the method of secret ballot was too high and had made it impracticable for the elections to be held since 2002. On this ground, Hon. Mwesige convinced Parliament to vote in favor of amending the Local Government Act to consider an open voting method – which he argued was realistic and more affordable for the country.

Your Excellency, while we acknowledge that the open method of voting for the LC I and II may be viewed as financially more affordable and does not involve the same amount of logistics that would be required to run a secret ballot vote, we wish to draw your attention to the following:

1)   Article 68 (1) of the 1995 Constitution of the Republic of Uganda sets a standard for voting at elections and referenda: “At a public election or referendum, voting shall, subject to the provisions of the Constitution, be by secret ballot using one ballot box at each polling station for all candidates in an election and for all sides in a referendum”.

2)   Article 25(b) of the International Covenant on Civil and Political Rights (ICCPR) to which Uganda is a state party, guarantees “the right of every eligible citizen to vote and to be elected at genuine periodic elections held by secret ballot”, and grounds this in the notion that “voting by secret ballot guarantees the free expression of the will of the electors”.

3)    The Universal Declaration on Democracy, a declaration adopted without a vote by the Inter-Parliamentary Council at its 161st session in Cairo on 16th September 1997 affirms the essential place of conducting democratic elections on the basis of universal, equal and secret suffrage for voters to choose their representatives in conditions of equality, openness and transparency that stimulate political competition.

Your Excellency, this implies that:

1)      It is a well-established practice that holding free and fair elections is one of the fundamental principles of democracy and the rule of law; and the secrecy of voting remains a key aspect of free and fair elections. Government has a legal obligation to conduct public elections and referenda according to the standards set in the 1995 Constitution of the Republic of Uganda and the International Covenant on Civil and Political Rights (ICCPR).

2)      Voters are not only entitled but also obliged to the secrecy of their vote. The method of voting proposed for LCI and II elections in which voters are required to line up behind their preferred candidates exposes the voters’ choice and violates this principle. As such, the open voting method does not safeguard the electors’ freedom of thought and their political and other beliefs. If Uganda is truly on a democratic path, then it should be seen to espouse a method of voting which ensures that the electorate is able to express itself freely and that elected representatives are truly representative, thereby contributing to public trust in the institution of local leadership.

3)      The proposed voting method violates the principle of anonymity of the voter. Freedom of opinion is endangered when a voter is prone to influence by threats of sanctions or reprisals. Open voting has time immemorial come with a lot of opportunity to influence or intimidate voters as they declare their choice by lining up behind their preferred candidates. In a country like Uganda where the population has over the years become deeply politically polarized, it is difficult to underestimate the influence and effect of fear of retribution that is embedded within an open voting system such as the proposed one. Within the context of Uganda today, the proposed method of voting is a ripe recipe of tension, vengeance and outright election-based violence – especially on the Election Day and in the aftermath of the elections.

4)      Free and fair voting principally demands that each voter makes an individual choice. Every person registered on the voters register must be able to express his or her choice in person, and this personal choice must be counted as such.  The mode of voting as prescribed under section 111 of the Local Governments Act, 2015 for village and parish elections is not consistent with this individuality principle and, in particular, constitutes a violation of gender equality and freedom of opinion.  The practice of open voting is reminiscent of days gone by of the reprehensible communal voting. In the Ugandan context, under an open voting system, it is likely that for instance, female voters may be unduly influenced to vote for candidates that their male counterparts, spouses or partners choose to vote for – for fear of catalyzing gender-based disagreement. In another case, for fear of going against their spouses’ electoral choice, female voters may decide to shun such open choice elections.  Modern societies including Uganda itself have denounced open voting methods as akin to primordial practices that infringe on voters own choice.

5)     Historically and contextually, electoral processes are highly prone to fraud and manipulation.  One of the primary reasons for the transition from ‘open’ forms of voting to the adoption of the secret ballot system in the 1800s was to help rid political systems of bribery.  Uganda is currently fighting the scourge of monetization of politics.  With an open voting system comes higher electoral stakes.   The higher the stakes, the higher the possibilities of voter bribery will be.  In effect, the possibilities of monetizing the local council elections that will be held under an open voting system remain high. The political players are quite optimistic of the eventualities very sure those voters are aware of the procedures and they will vote for them since it’s not secret.

Your Excellency, under Vision 2040, the Government of Uganda underpins the need for democracy as the anchor to transform the country. Similarly, the second National Development Plan (NDP II) recognises that without free and fair political and electoral processes, key development objectives cannot be achieved.  To this end, the NDP II proposes to institute mechanisms to strengthen credibility of electoral processes in Uganda and citizen participation in the electoral processes.

As the Fountain of Honour of our Nation, CCEDU would like to respectfully appeal to you, Your Excellency, to guarantee that:

Your Excellency, CCEDU contends that the currently designated method of voting in the LCI and LCII elections not only fails to meet the constitutional and internationally provided for standards for conducting public elections, but is also fertile ground to foment conflict and sow seeds of discord in communities – thus undermining the hard earned peace, stability and unity in many parts of the country.

CCEDU appreciates that democratic electoral practices in Uganda are still affected by various national and contextual factors, traditions and limitations. While we recognize the importance of taking into account our country’s milieu and resource limitations, Your Excellency, we appeal against the latter being used as pretext for practices that undermine the basic principles of democracy and governing the conduct of free and fair elections.

Lastly, Your Excellency, CCEDU therefore proposes a more cost-effective option of the secret ballot method of voting in the LCI and LCII elections – in which voters record their (candidate) preference on a plain piece of paper in privacy – by way of writing or putting a thumb-print. We recommend the most basic form of secret ballot that uses standardized blank, plain or colour coded pieces of paper/cards upon which each voter marks his or her choice. Without revealing the choice to anyone, the voter in this case would fold his or her piece of paper with their marked choice and place it in a sealed ballot box. The ballot box is emptied later for the counting of the ballots. This method is not only financially affordable, but also preserves the secrecy of the ballot as well as expands possibilities for the electorate to participate in elections.