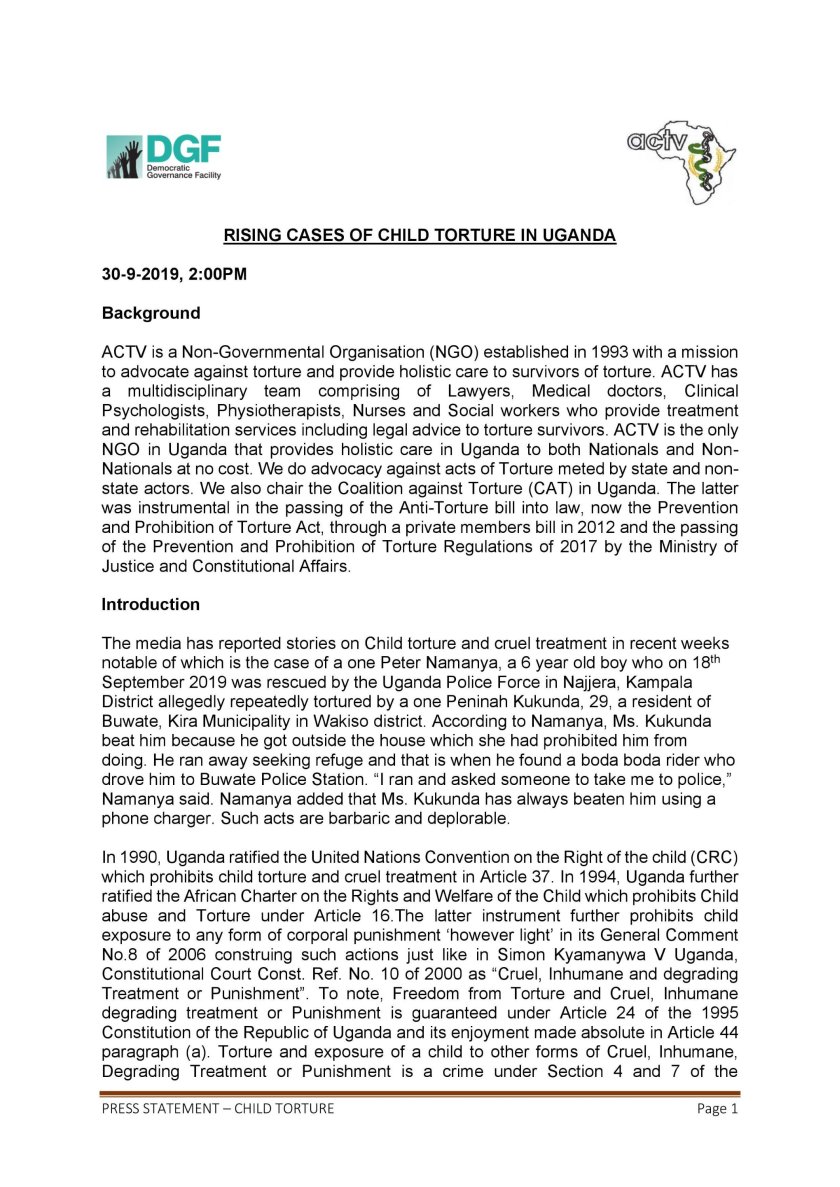 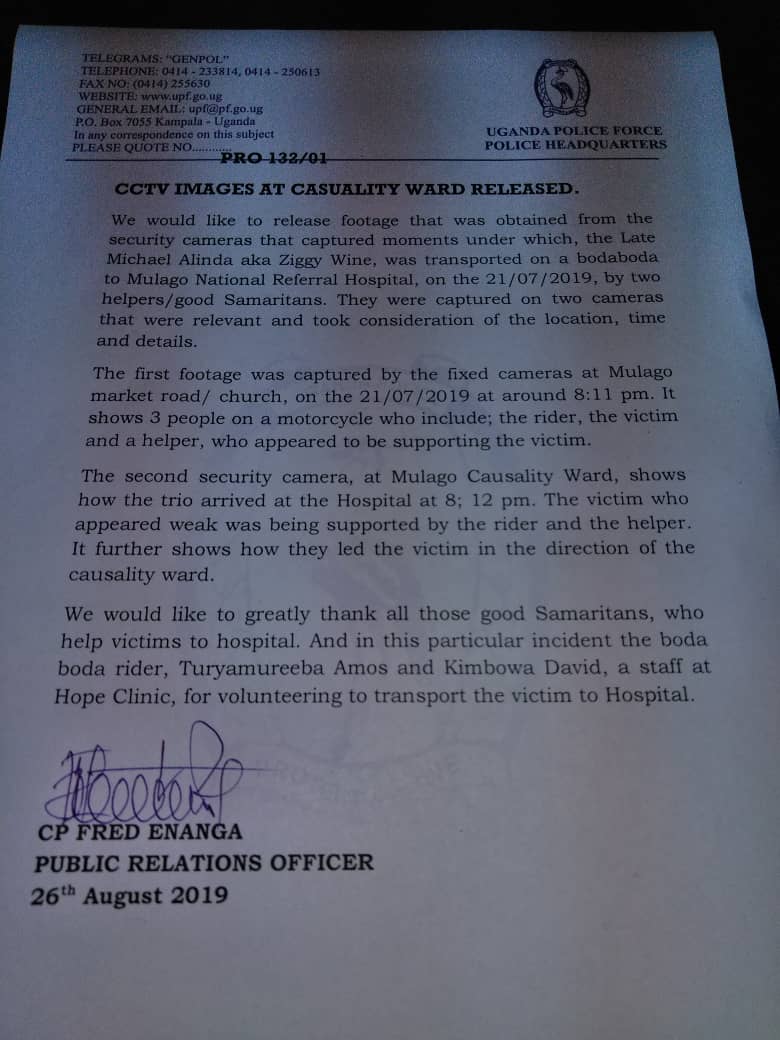 I don’t know,when he became a lost one. I don’t what happen or changed Andrew Mwenda, but surely at one point, he gave up and ate the whole plate served in-front of him. Sure, it was more flamboyant, than what he had ever been offered in opposition and as s sceptical human being. Now, his a defender of the indefensible and he continues to run on that path.

We know that his retaliating against the opposition, when his recent piece is named this:” Inside Bobby Wine’s crass opportunism in Ziggy Wyne’s death”. That is the headline of the piece he wrote today, he didn’t even care to write Bobi Wine, but Bobby, like Ricky Bobby of Talladega Nights. That’s what’s has become of this man.

“People Power is a movement without a cause except to grab power. It seeks so exploit the anger many Ugandans have at the state of affairs of in our country in order to gain power. But it has neither facts not a vision to justify its reckless pursuit of power. So its strategy is to deny all facts and insist that everything is subjective and relative; to dismiss all evidence as forged if it does not promote their political agenda; and to argue that every argument that seems to favor President Yoweri Museveni and his NRM is not based on conviction but has been paid for. It is interesting People Power resembles the Donald Trump movement in the USA although Americans who support it are anti Trump” (Mwenda, 14.08.2019).

We can clearly, see by this paragraph alone where Andrew stands on the issue. It isn’t rocket science, neither is it exceptional. As his rants against Defiance and Besigye will become legendary and age like old open cans of coke. You just know the fuzz, the sugar and the taste will dwindle. The same with this sort of rant is this.

“The aim of this strategy is obvious: bully everyone to believe change is urgently needed to rescue Uganda from catastrophe. They don’t want people to question the change they propose or ask for their alternative policies or even question their intolerant behavior. To question their lack of policy alternatives and the crudeness of their methods is evidence of having been bribed by Museveni” (Mwenda, 14.08.2019).

We shouldn’t even be bothered with the assertions here, as they are like a leaf on the wind. Like he doesn’t the lack of policy, the lack of guidance and even moves ahead from Museveni himself. As, he even needs the Youths of Mbabazi to move forward. The ironies of this statement is so many, plenty even. Mwenda thinks he can turn this around. Since, he knows how Museveni operates and therefore, it is without a doubt he tries to make the new movement looking silly.

“Yet Defiance and its bastard child, People Power, have failed to subdue the spirit of our nation. Increasingly many journalists like Canary and many others are finding the courage to stand up for the truths and defend it against this demented cult. The story of Ziggy Wine is one such example. These are the journalists who have chosen to swim against the tide of popular rhetoric and self-righteous indignation common among sections of our society today. They have chosen to defend right when it is miscalled wrong, to fight vices such us intolerance, radical extremism, blackmail, slander etc. that are presented to us as virtues” (Mwenda, 14.08.2019).

Well, he had to take a torch against his arch-nemesis, the defiance campaign and Besigye, because he seems to think the People Power Movement is kid of these actions. They might be inspired, they are even working together towards the same goal. A peaceful transition post-Museveni. We know, that Mwenda see this as a radical idea, because he cannot eat as plenty post-Museveni. Unless, he defer from his stances and tries look more objectively.

Mwenda wants the public to eat of the hand of the government. The hand of the government, that has changed a story and not come forward with binding evidence or even proof of its allegations. That is also questioned by the family of Ziggy Wine himself, the friend and artist, who worked together with Bobi Wine. It seems like Andrew trying to split this and not even considering anything else, than the handpicked assertions put forward, because that cleans the hands of the NRM.

That he calls People Power a bastard and a demented cult. Says more about his own place in the Movement and behind the chambers of Museveni. As he has to undermine and excel utter negligence of the Sole Candidacy and One Man with a Vision narrative of the NRM. Which he so strongly stand by at this point. The words and the rhetoric of this man, shows that his so obsessed defending Museveni and his ways. That he even forgets how the one-man show and self-styled President for life, expect loyalty and to follow his vision. That he is so blind and forgetful. It is a mystery, that he could even see the keyboard, when he was typing his article.

Nevertheless, enough of this nonsense. What a about a cup of tea? Peace. 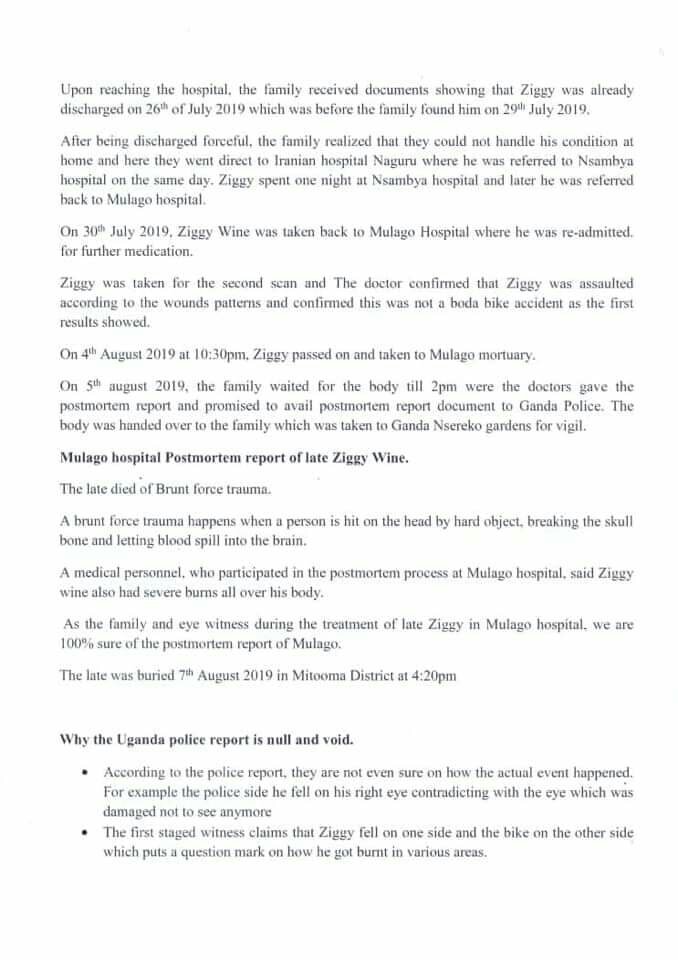 “In this instance, we urge all political actors who are using this incident for political leverage and propaganda, to refrain from doing so.

May the soul of Michael Alinda aka Ziggy Wine rest in eternal peace.

Well, if your telling a lie. Please make it so straight forward, so that the public cannot catch you up in a lie. That seems to be the story of Michael Kalinda aka Ziggy Wine. There are too many fault lines, that has to be shown. To show the magicians of spin, the Andrew Mwenda’s of the world and his ilk like his step-son Canary Mugume. That they should tell the same story and not switch it up.

First, use the right Boda-Boda. They used a wrong colour and with the wrong tags. If Ziggy Wine would drive it, it should be another one.

Secondly, not use one of the same witnesses as before. ASP Hellen Butoto has been the Police witness before, she was said to be a teacher, but apparently she’s a part of the police force. Surely, the other witnesses the state has produced that saw the same thing. Can clearly be put into question too, as the one big-shot in this investigation is a fire-ball in it self.

There are already enough things that put it into question as it is. There isn’t just mere speculation. It is that the family was barred from seeing Ziggy Wine in the hospital. That he was just delivered to the hospital without knowledge of what happened to him. There is alleged damage to his skull in a supposed accident. However, there is also words of losing of fingers and poking out an eye in a torture session done to Firebase Entertainment artist and part of the People Power Movement. This can clearly be true too.

Especially, since there is three different stories and so many factors mismatching. That the spin-doctors has lost their touch. As well, as the words of mouth, that the dying man himself is alleged to have said to his doctors that he was “Bankubye” meaning they have beaten me. This means something totally different than falling off and hitting his from a boda. Neither having an accident with others on a boda.

There are sisters, teacher (happening to be police officer) and so on. Telling different stories. While his death is still a mystery. Like a vanished plot. Where you can wonder if the CMI or anyone else did something. Now CP Fred Enaga and the spin-doctors of the regime tries to polish it. But clearly, they are not matching it.

What is special is that the reports, the post-mortem, the CCTV cameras nor been any accident pictures been leaked. Because, there been sudden witnesses telling different stories, produced eye-witnesses whose not coherent at all. Not even blood on the supposed scene of the accident. That just happen to be spotless, when Canary Mugume did his thing on live-air. Nevertheless, there are enough questions arising.

Why did he die? Who needed him dead? What motive is it to possibly kill him? Last, but not least, who earns on the spin of death of the musician connected to Bobi Wine?

Because there are enough questionable dots. I don’t have the answers, but the stories, the open details and the shown issues. Are putting enough into a questionable stage, making you suspicious, that there is more behind stories told. That there are something sinister going on and someone did something vicious to Ziggy. Since, the state, the state-sponsored media and the handlers of the state tries to wash this sin clean.

Just to finish this one off. To just make it even more rare. Is that Ziggy Wine was first admitted to Hope Clinic Kyebando on the 21st July 2019. Later transferred to Mulago admission number 471567/2019. The family was able to trace him on the 27th July 2019. Dr. Nsambya referred him to Mulago Neurological on the 30th July 2019. Than he later died on the 4th July 2019. Now were at the 7th August 2019 and the stories since haven’t made sense.

It doesn’t make sense to me. What we do know and what has happen is in a murky space. Where there is lacking dots, no matter what the spin-doctors are saying. That differs from the police reports even. Mwenda claims he didn’t eat his pills or take his medicine. Just like that is another smokescreen. If isn’t brain-damage from a boda accident, than its lack of medication so all angles are covered.

So, as I started, next time you lie to the public. Ensure that we cannot spin a web around it and catch you in it. Ensure its so facilitated, that the exhaust will not burn your fingers, your balls and your prefrontal cortex, which you need to function. As the public have seen, heard stories that doesn’t make sense.

Ziggy Wine died, by some means and the Police together with the state media seems to be busy covering it up. If not, why wouldn’t they have a story, evidence and the proof of it at once? Instead of keeping it to themselves and not unleashing to the public. As they are scrambling the stories and not connecting the dots. Peace. 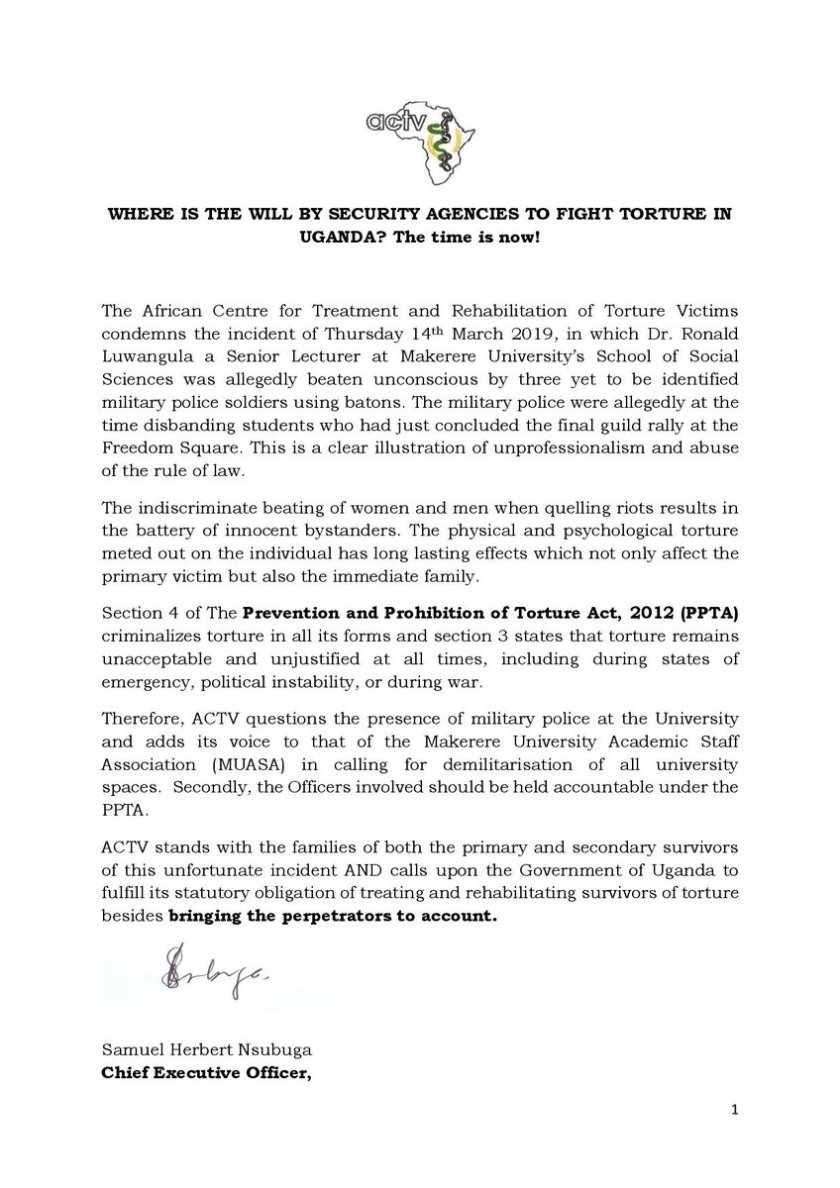 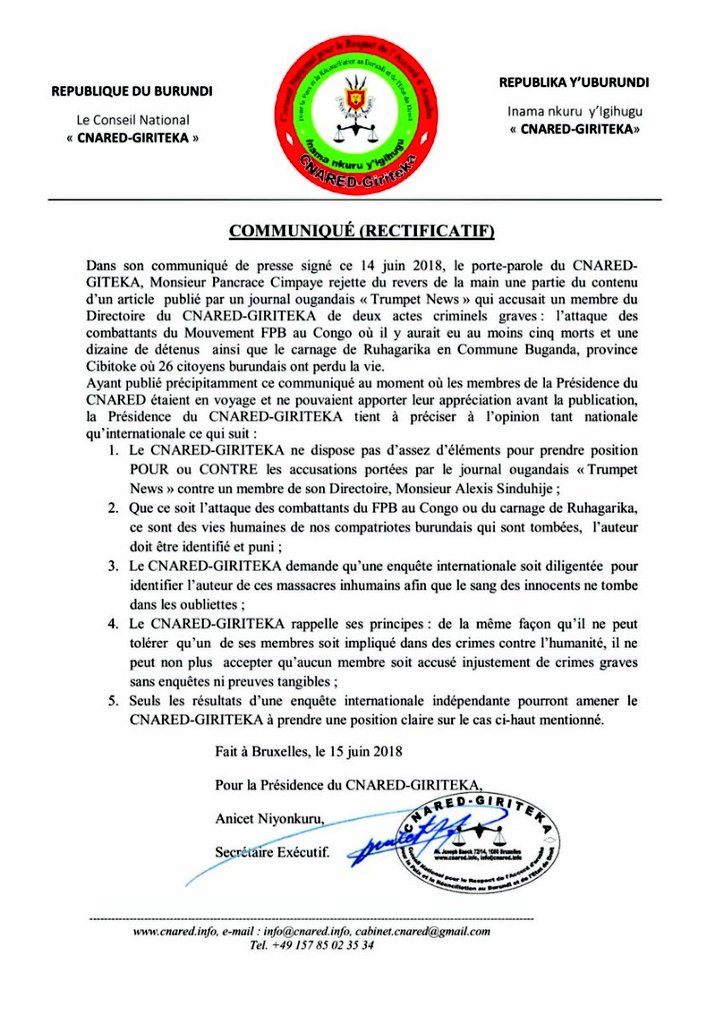