Yes, as the time goes by… the repetition and usage of a scapegoat wears off. That is just a fact. Especially, when the scapegoat and the villain isn’t as powerful or uses it’s forces. The Prosperity Party and the government institutions are finding all ways to vilify and blame the Tigray People’s Liberation Front (TPLF).

I would never say that the TPLF isn’t at fault and never done anything evil. No, that isn’t justified. The TPLF have their wounds, massacres and tarnished reputation over years in power. That isn’t anything to deny or counter, as that should investigated and challenged in the courts of law. Which any sensible government petition, indicts and sentence criminals to a punishment in a correctional facility. Therefore, that should be done and not just blame it for everything without evidence.

With that in mind… the FDRE Government Communication Service has targeted and lied deliberately about the TPLF. That being the closure of Mekelle Airport or the Humanitarian Convoys to enter into Tigray region. Secondly, now they are blaming the TPLF for the execution of Sudanese soldiers from Sudanese Armed Forces (SAF). Which is hard to believe, as the Addis Ababa has lied about all details in the conflict in Northern Ethiopia.

When you know this… the ENDF isn’t taking responsibility of the executions of SAF soldiers. They are now “investigating” it, but know that they will never take any sort of serious responsibility for it. Because, the regime of Addis Ababa don’t want to loose face and that’s the gist of it.

Just like it always did disclaim the skirmishes last year into the Al-Fashqa region inside Sudanese territory. Therefore, the recent Press Statement made by the Ethiopian Ministry of Foreign Affairs is again blaming TPLF. While not taking into account the knowledge of SAF and the Sudanese who knows who took them as Prisoners of War (POW) and the civilian who was also killed by the authorities in Ethiopia.

So, when the PP and the FDRE Government Communication Service drops their statements, press releases and such. Question the narrative and the reasons for it. Since, they have deliberately acted in disservice and been dishonest in the messaging. Therefore, don’t just listen and take as a truth. That is giving way to a government that easily takes life, creates famine and arrest dissidents.

I’m just asking you to be aware and keeping your head cool. Because, the FDRE and the PP is working for one man and his emperor complex. That should be said and don’t be shocked by that. He wants everyone to fear him and his terror. This is why his time in office should be called the ‘Medemer Terror’. Peace. 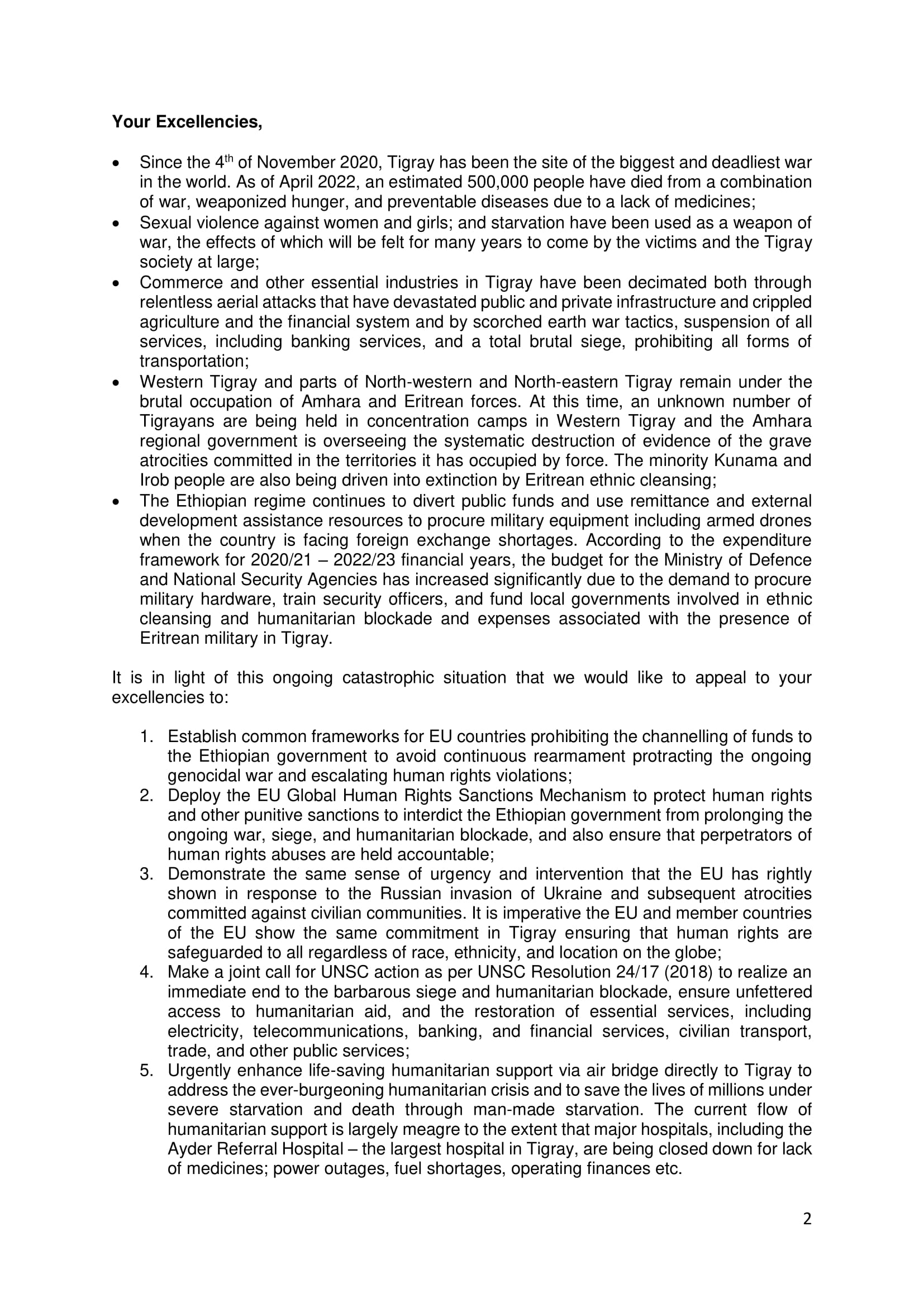 “Why are innocent civilians killed?

The killings of mass Oromo civilians in the Gambella Region must stop immediately. The government as a government should follow up and investigate and clean up. The perpetrators should be brought to justice; however, killing civilians in the name of “Shane” can cause serious problems as a nation and this brutal act should be stopped.

There is reports of bloodshed and massacre(s) in the Gambella region in Ethiopia. This is happening as the reported joint forces of Oromo Liberation Front & Gambella Liberation Front in the Gambella region. Therefore, it is a reaction to the rebellion and the regional militias retaliating against the state. We are possibly seeing an act of revenge, which is an war-crime. Nevertheless, these acts of evil doesn’t happen in a vacuum. Which is why I have several of reports from the last 48 hours. Where there thoughts, reports and direct commentary on the situation. That is something I see as fit, because it tells a deeper story.

“On June 15, 2022, Omod Ojulu, the Gambella region chief administrator, announced the establishment of a night curfew that would start at 8 p.m. After that time, only the federal security forces will be allowed to move through the streets, he warned. He also called on the public to inform security forces of any suspicious activity in Gambella city, as well as help security forces in protecting the peace of the city” (Gambella Stars News – ‘Ethiopia: Night curfew imposes in Gambella region start at 8 pm’ 16.06.2022).

“Thoughts on the current situation in Gambella.💭My question is what human being will allow a senseless war to occur in their own home without taking action? In his most recent video; Gatluak Buom said only “20% of Nuer people are great and the remaining 80% are senseless”. I must disagree with his statement and challenge his narrative of leading a rebel offense in a city with such a large population of families. In Nuer customary laws and traditions women and children will always be protected in the event of a conflict, this is the reason a large population of civilians involved themselves by taking arms against this rebel group. Your mission to irradicate the current administration has lost its cause after this violent offense. I highly suggest that you retract your position. You can easily gain the trust of Gambella youth to support your mission if you complete this in a non violent means. Nuer society has had enough with war and senseless killings. The effects of this current conflict have been devastating and will take sometime to recover. State building without blood shed can be accomplished in this Era that we live in” (Gambella refugee camps residents/UNHCR, 16.06.2022).

President of Gambella Omot Ojulu and his deputy Thakuey Joack has confirmed the elements of GLF/A that attacked the State Government yesterday. The elements of GLF/A are Anyuak, Nuer and Oromia forces from Damadollo region. They wanted to overthrow the government of Omot Ojulu and Thakuey Joack leadership over the nepotism and discrimination against the people of Gambella Region” (I Love Nuer, 15.06.2022).

“This morning around 6:30 AM, Gambella, Ethiopia was attacked by rebel groups. Many people have died, families have been displaced and homes were destroyed. The fighting took place within a mile of The Hope For Children Orphanage and The Lutheran Seminary. Pastor Simon (pictured) who runs Hope Orphanage and Professor Tor Chul of the Lutheran Seminary have both shared that they are all ok. Please pray with us for the people of Gambella – for immediate peace and safety during this time” (Audio Scripture Ministries, 15.06.2022).

We know by reports that there was between 20 to 40 dead after the skirmishes between government forces and the militias yesterday. Where soldiers and militia members was killed. There was also reports of civilian casualties in Gambella town.

Now, there is reports of retaliation now and civilians targeted out of their ethnicity. That is now done by government forces. That being Amhara regional special forces and other associated authorities. They are shooting at innocent civilians who just lives and resides in the region. They are defenceless and has no weapons. The soldiers are senselessly killing and that’s extra judicial killings, which should be spread. Because, this shows what sort of government that is ruling Ethiopia right now. This is the “Medemer Terror” which some has talked about since the invasion of Tigray region in November 2020. Now, similar actions are now happening in Gambella region.

This is why this has to be called out and it’s a reason why the regional militias is growing in popularity. When the state is just killing people for who they are and their ethnicity. That should be a “warning sign” for a possible genocide. Since, we know the army and regional forces has had their “final offensive” in Oromia for a while too. So, it is not like it’s only in Gambella.

The Prosperity Party makes every region burn and they do in the name “rule of law and law enforcement”. Peace.

“What we need is to restore peace in Ethiopia, to repeat the victory achieved in the law enforcement operation. By fighting, we maintained Ethiopia’s sovereignty and territorial integrity. Ethiopia is on the right prosperous path. It is unquestionable. Ethiopia is building institutions that can endure challenges. We should never leave hatred and blood feud to coming generations. Let us control our emotions and go forward for peace that is what we need. We need peace with all actors including the TPLF. We need peace with everyone because we get reward from each peaceful day. Every time we get into fighting, it costs us. Not only money but also productive human lives. We are ready for peace to avoid further conflicts. We don’t like fighting; we hate fighting; I have experience of fighting since I was 14 years old. I have seen the results of fighting. It claimed the lives of my friends. I need development. Who likes fighting? It’s only those who don’t know it who love fighting. We want peace with everyone; but that doesn’t mean we have negotiated with TPLF.” – Prime Minister Abiy Ahmed Ali (14.06.2022).

It is hard to believe that this man was “worthy” at one point to the Nobel Peace Prize. However, in the year of 2022. No one should believe that this man is worthy of such an honour. The honour bestowed upon him wasn’t for his kind. No, he has ventured into war, destruction and used all means to consolidate power in the Republic.

Prime Minister Abiy is a warlord and this sort of speech proves that. He says the “Law Enforcement Operation” was successful, as it has ensured destruction, complete ruination of a region, massacres, mass-rape and a man-made-famine. That is really telling when he wants to repeat that “victory”. That’s saying something and there is no mercy, apparently.

What is striking by saying all of these words. The hatred and the means to an end has been clear for a while now. There been such talk of endless violence and trying to conceal the war-crimes committed. Just like his speaking of peace now and possible negotiation, but who really believes him?

Seemingly, the PM has been more interested in ordering bloodshed and going after his enemies. That’s why this sort of speech is hard to believe. Abiy can talk of saving lives and avoiding war. Nevertheless, most of his time in office has been decreeing and ensuring more conflict. That’s why the army and authorities are brutal in nearly every region of the Republic. There haven’t been any region where the state haven’t used impunity, injustice and been behind extra judicial killings. Therefore, the speaking of peace and wanting it is futile.

The PM has been a man of arms and using the “rule of law” as a stick to pin people. Anyone who suddenly oppose or dare to question will end up in jail or be in real trouble. That’s what is happening. So, his using all means to torment and go after anyone in the Republic.

He says he hate fighting? Why has the army, regional special forces and everyone else been so boosted and ordered to use violence, then? It doesn’t sound sincere or truthful. If this was only a one time or just to quell on bloody riot. Well, it could be believable. However, in this regard… the PM and his government has used the troops to silence the population an-mass.

Abiy wants to talk like he means this… but I don’t believe him a single bit. He would rather kill and destroy his enemies. The PM won’t talk or negotiate with an open heart. No, his just buying time to find another way of ending them. That’s why this humanitarian truce have been put in order. To buy time and get possible foreign aid to save the economy. The war has cost the state and inflation is running wild. Therefore, the PM needs a little bit stability before he strikes Tigray region again.

A man that could usher in a war like this. Can easily do it again. The goal is to end the ones who didn’t bend the knee and follow the program. Abiy is that sort of leader and that’s clear. Anyone who opposes him will be in jeopardy. Peace. 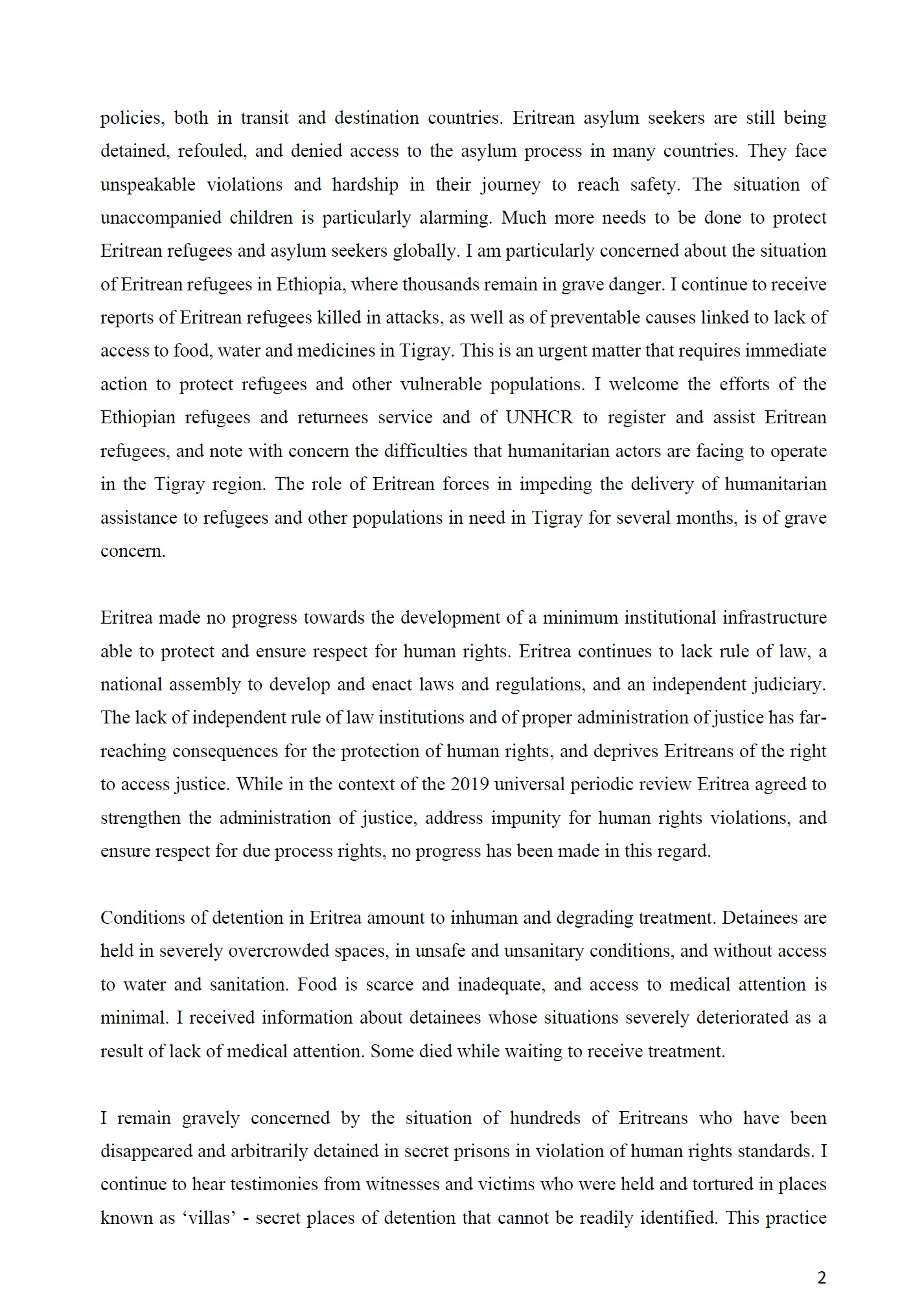 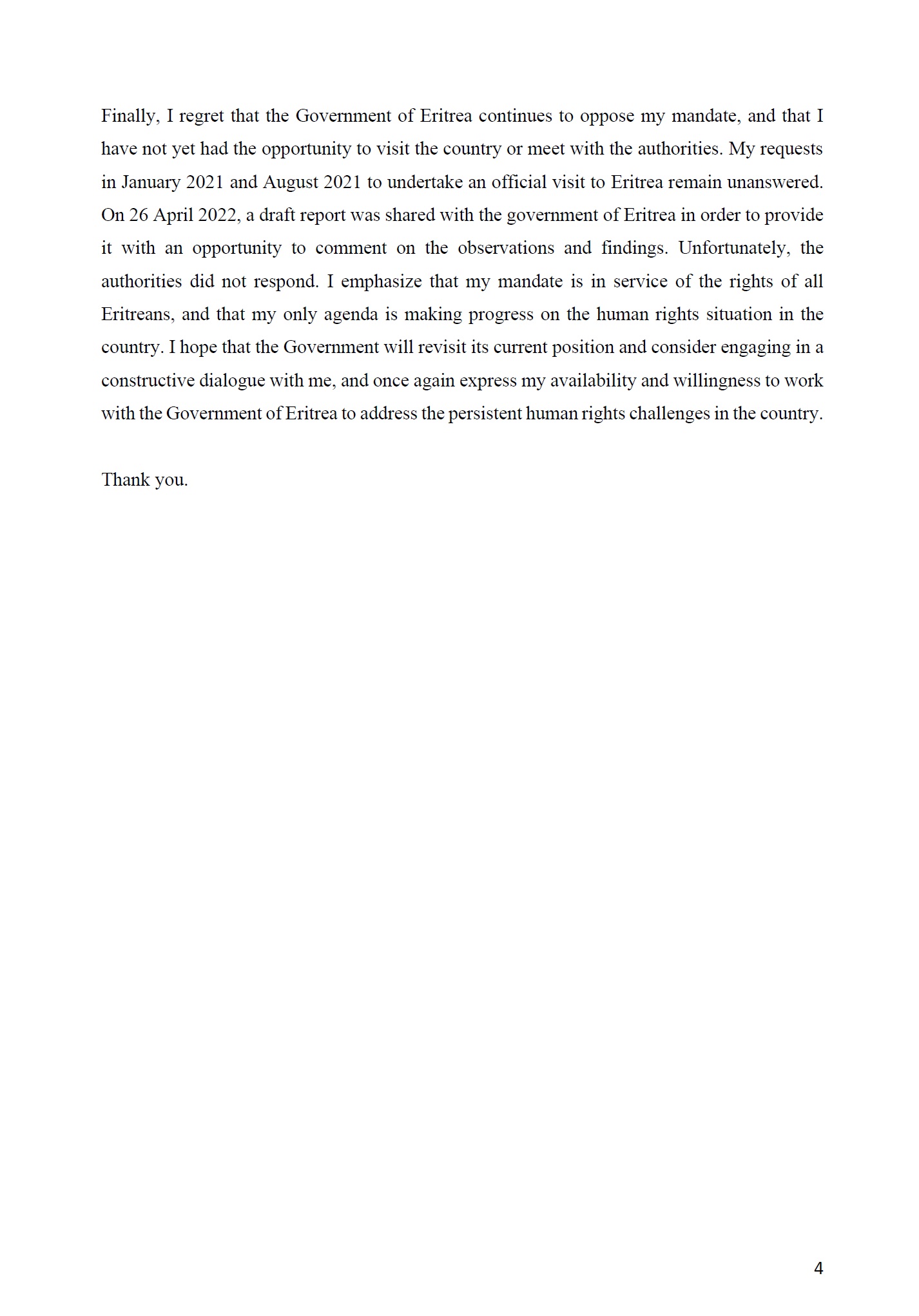