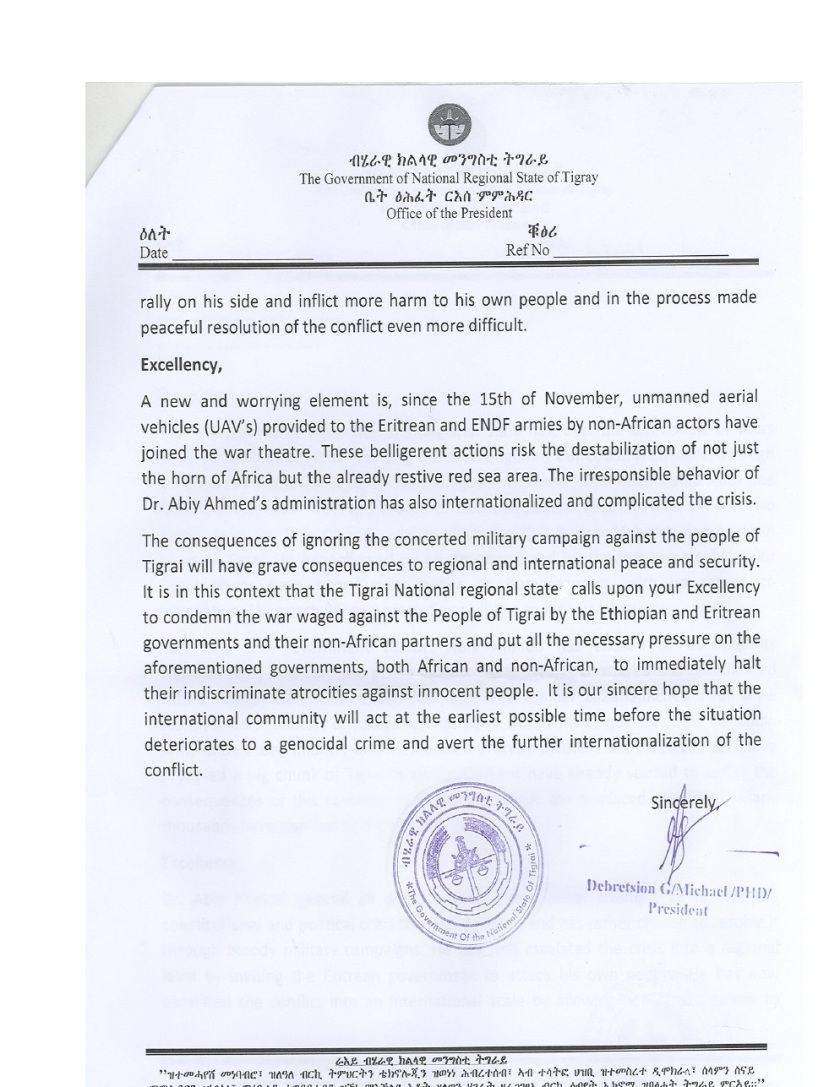 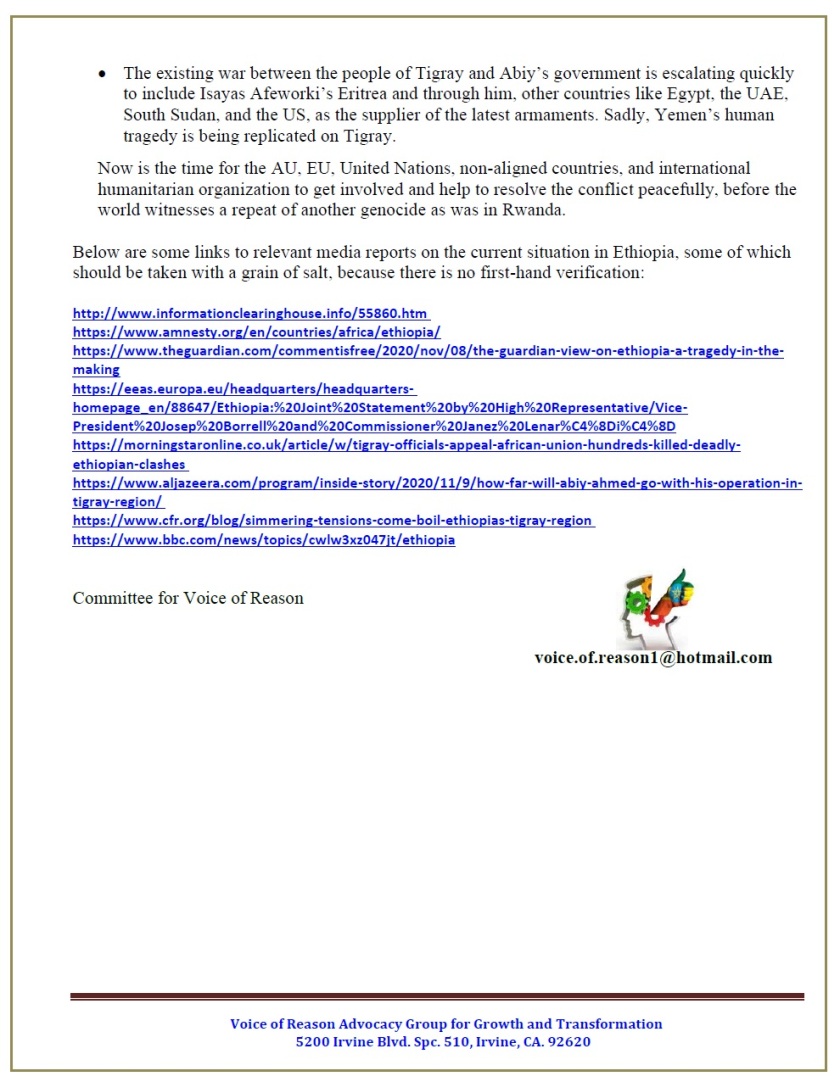 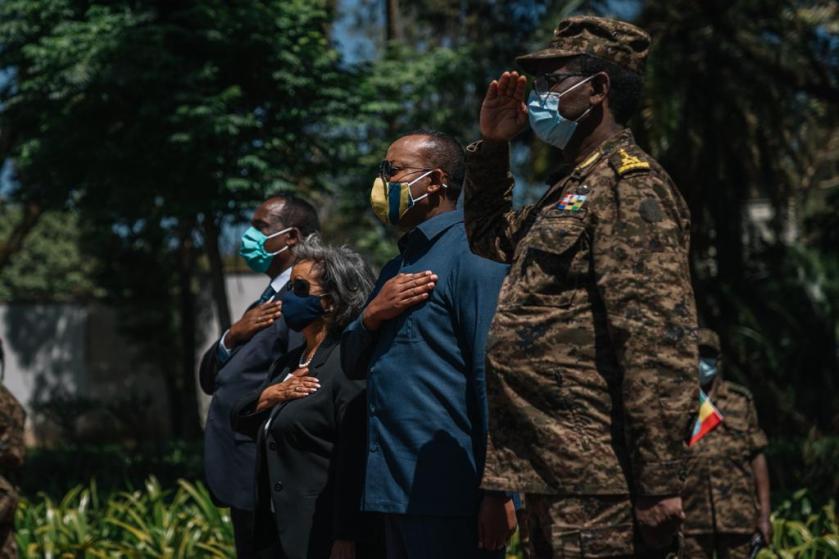 Prime Minister Ahmed Ali Abiy ordered this war on the 3rd November 2020. A direct war to annihilate and get rid of the Tigray People’s Liberation Front (TPLF). Where he has attacked a state, a region and used all military force to sustain this. That is using the Federal Army and their weaponry to combat the Tigrayan forces. Therefore, we can easily assess that the Prime Minister isn’t a man of peace anymore.

PM Abiy is a man who like the glory, the publicity and being in the spotlight. He favours being a donor darling and a man of the West. A man who can get support from allies across a variety of nations and be respected for him name. Alas, now he is yet another war-lord. Another man who arrests, detains and get rid of opposition. We know this from the brutal battles and actions done in Oromia. Where he has gotten rid of and detained anyone who oppose him.

In Tigray he went to a full out war over a Constitutional Dispute and didn’t want to mediate or negotiate with the former allies of TPLF. He has worked with the TPLF for ages and been associated with them in the Ethiopian People’s Revolutionary Defence Front (EPRDF) government, but we are supposed to forget that fact too.

Therefore, Abiy knows his “enemies” and know their structure. The man know how they work and operate. He has worked close with them in the past and knows their “Special Forces” and now deemed them militias, because they cannot be associated with the Federal Army anymore. That is because of the sudden changes and decisions made Addis Ababa over the remain fractions in Mekelle. This is just the bleak reality in this.

Because of the ego of Abiy is the reason why we are here. He wants to end on top and be supreme. The man wants to be the hero and look like a majesty. Prime Minister Abiy wants to be King or an Emperor. This is why anyone not abiding to his words and his orders deserves retribution. That is why the Oromo has suffered and now the Tigrayans are doing it too.

Abiy is avenging himself on all Tigrayans, while his only supposed to sanction and go after the TPLF. The PM is using all means to punish them and even take away their jobs because of their ethnicity.

This was all over an constitutional dispute, an election in September and suspension of it federally because of “COVID-19”. While there is no issues ordering a war in the same time-frame and make more people either internally displaced or become refugees in Sudan. The PM is clearly very fixated on total control and that’s why his hunting after the TPLF at this point.

Even if the Prime Minister wins this war. His still a lost soul. Nobody honestly can trust him. He kneeled and greeted the opposition. Later he arrested, detained and charged them maliciously. Now, his going after the former allies… who he has made his enemies. That is why he attacked Dr. Tedros Adhanom and claimed all sort of behavior while his working as the head of the World Health Organization (WHO). That’s all happening for one reason: Dr. Adhanom is a high ranking official in Executive Committee of the TPLF and suddenly that makes him a target of Abiy. Like everyone else in the TPLF is that by association. Not a good look…

The truth about who Abiy is now out. His not a man of peace, but yet another War-Lord and the ones who stands in his way will be silenced. That is image and the perception he now has unleashed. His not a man of honour, but a man who finish of his critics and opposition with an iron fist. Peace.

Just as there been reports of shelling from the Eritrean side of the border towards the Tigray Region. Also been reports of usage of United Arab Emirates Drones to conduct warfare and missions within the Tigray Region. The international sphere and neighbours are intervening in the 13 day long war between the Federal Government under Prime Minister Ahmed Ali Abiy of the Prosperity Party and the fight against the Tigray People’s Liberation Front (TPLF).

We know that Sudanese has closed the borders. They are not interfering, but have tried by the Sovereign Council to get IGAD to mediate in the conflict. However, Abiy have dodged that and dismissed the calls from Khartoum. The PM on the other hand has gotten a heads-up and a thumbs-up from Djibouti. As they are coming with an helping hand and in solidarity.

Now there is reports of further escalation:

“November 16, 2020 (Thessherald)–The Office of the Ethiopian Prime Minister has reportedly sent a letter – requesting 4,000 troops from neighboring South Sudan as the armed conflict escalates in the Tigray region, a senior government official told Thessherald. “Yes, the Ethiopian Prime Minister has requested us to help them bring orders in their own country by contributing at least 4,000 SSPDF soldiers to fight alongside their forces,” said the official, who requested anonymity for fear of reprisal” (The South Sudan Herald – ‘ETHIOPIA REQUESTS 4,000 TROOPS FROM S. SUDAN AS VIOLENCE REACHES BOILING POINT’ 16. 11.2020).

This is like asking for a “half” division or a regiment of troops to support the ones who is already there. We know that the Prime Minister is already trying to enlist students and let them abandon Universities to join the National Army. This has been leaked through letters, which shows the state intention with this war. As well, as there been troops moving from Somalia and gotten moved all the way to Tigray region. Therefore, the state using its means to combat the TPLF.

That is why it’s not shocking that the PM would ask this. As he would ask for mercenaries and soldiers of fortune to fight his battle in Tigray. That he would use South Sudan People’s Defence Force (SSPDF) to participate in their “Operation Law Enforcement”. If the ones believe in its simplistic targets and quick-fix mandate. Must be seriously rocked to its core, knowing the back-channel to Juba to ask for reinforcement. This together with the shelling and the usage of UAE supported military gear. That is all using all friendships of Abiy to annihilate the TPLF and bomb the region into pieces.

We should worry the way the Prime Minister Abiy is using his allies here. That will make the battles and the suffering more decisive as he intends to use all means to annihilate the enemy. There will be no soft touch, but brothers with hasty trigger-fingers. They will pull the hammer and ensure the men is down.

That he has used this diplomatic capital in Asmara, Khartoum, Djibouti City, Dubai and now trying to get something out of Juba too. Who knows of new Foreign Minister Demeke Mekonnen was on a mission to secure more help from Kampala and Nairobi as well. Since, they might not leak that out, but done in closed doors meetings with Museveni and Kenyatta. However, they wouldn’t say this that quickly. Because, that would look bad at this current time.

We can see that the PM is using all means, that he sends birds with a message to get help from Juba, South Sudan. That says it all. This says that the PM is willing to have mercenaries and soldiers of fortune to fight his war. A war that he says is easy to win, but if it was so easy too win? Why do you need foreigners to do it for you? Don’t you have enough soldiers and arms to kill the dragon?

Well, it seems like his seeking superiority with hired guns. That is not a good look and this is why the source wanted to be anonymous. Peace. 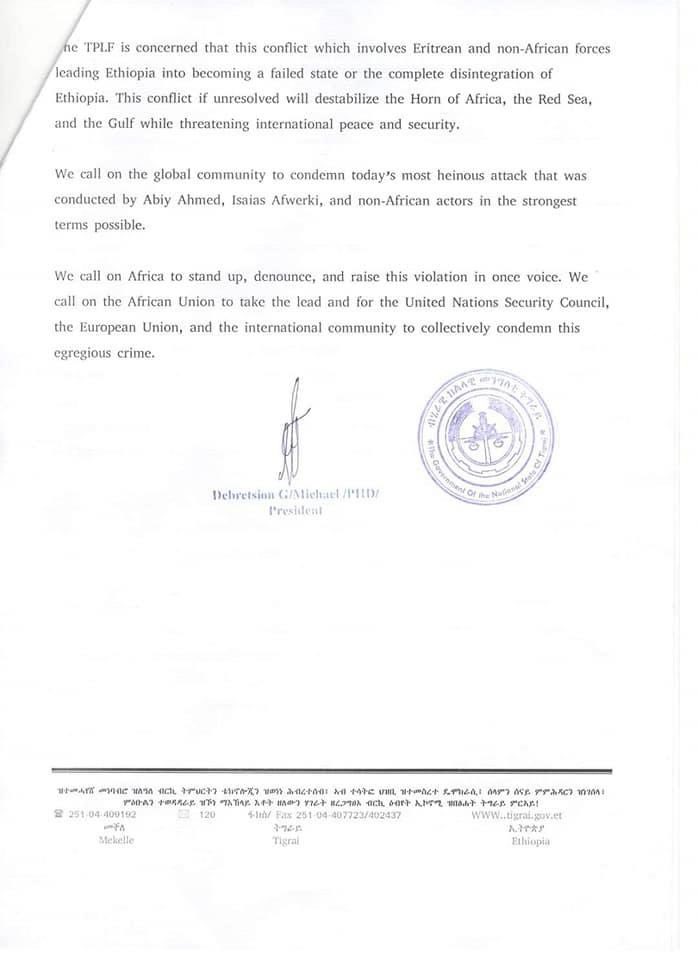 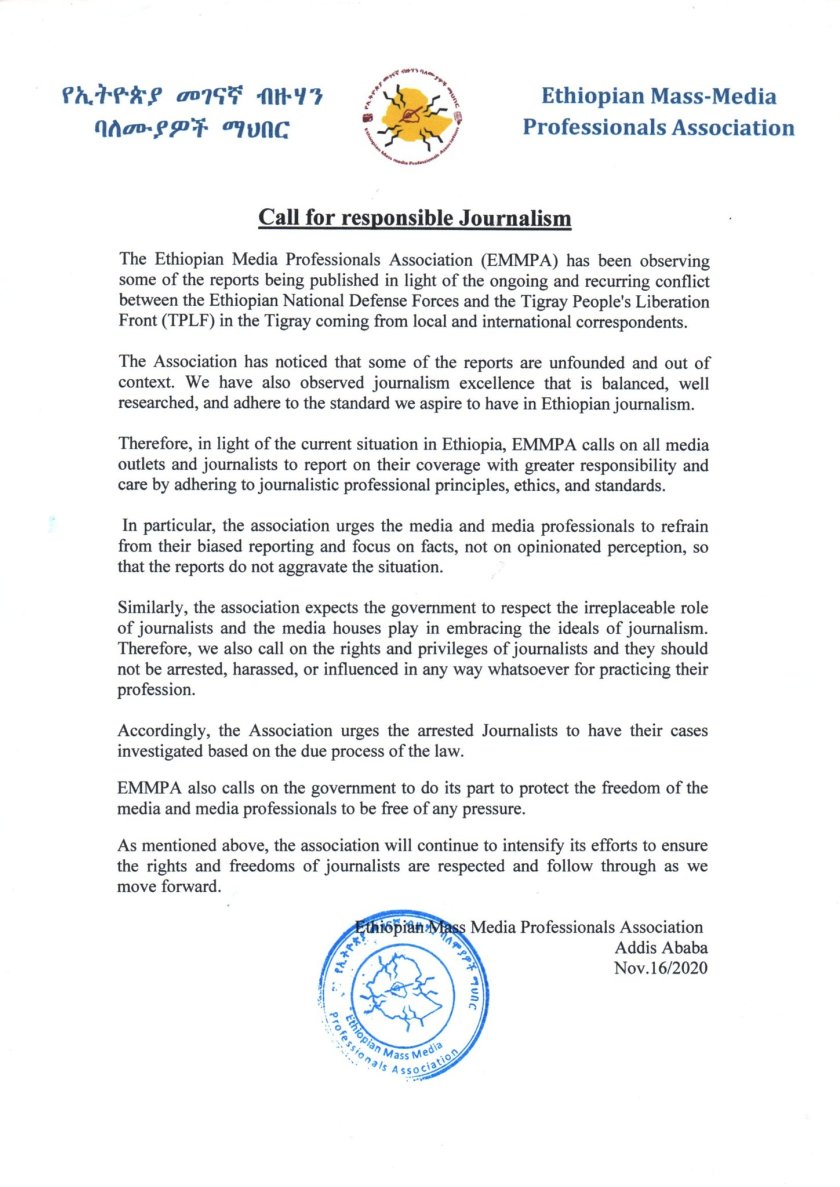 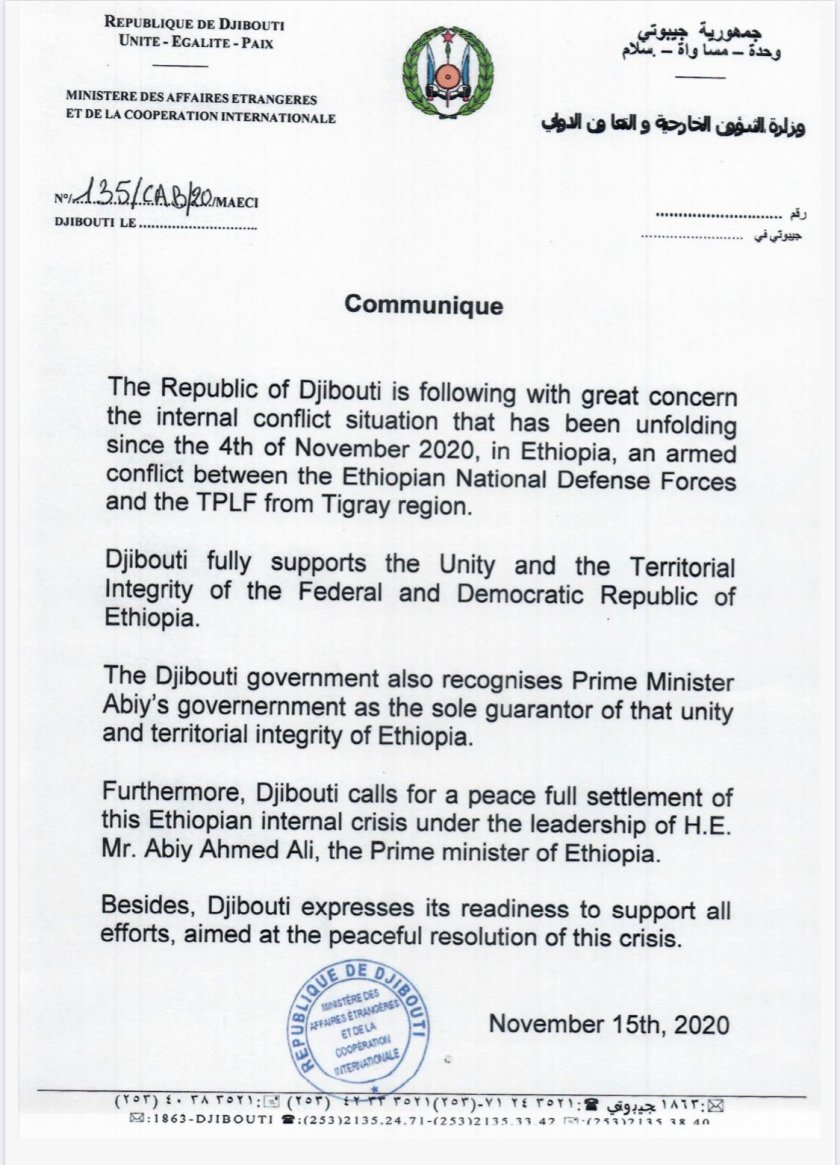 “Pandora’s box comes from the ancient Greek story about a character named Pandora, who was given a box as a wedding gift but was ordered not to open it. Eventually, curiosity overcame her and she opened the box, releasing death, evil, and misery into the world. The term Pandora’s box was first used in English to refer to something that could cause many problems sometime around 1570” (MacMillan Dictionary Blog – ‘Pandora’s box’, 2017).

On the 3rd November 2020 he ordered the army to attack Tigray People’s Liberation Front (TPLF). It is now on the 12th day of the civil war between the Federal Government (Prosperity Party) versus the TPLF. Prime Minister Ahmed Ali Abiy is terming this as an “Operation Law Enforcement” and to regain “Rule of Law”. While not deeming it as war or warfare, even has his ordering soldiers, airstrikes and direct military operation in the regional state of Tigray.

This is why the Tigrayan civilians are fleeing the region to Sudan. Why the Tigrayan citizens are banned, arrested and silenced in the public sphere. The Federal Government isn’t only going after the TPLF, but everyone who has the ethnic background. So, the PM is taking more of ills from Pandora’s Box.

Prime Minister Abiy opened Pandora’s Box and all the ills went out of it. The hope is left behind. The PM wasn’t supposed to open it. He was given the box and wasn’t told not to do so. However, he still did it. The PM went to war and now the affects will appear. The ethnic angle, the horrific massacres and human rights violations will be revealed down the line. When the refugees is speaking and investigations into the acts of the parties are unleashed to the public. Because of the media blackout, the telephone and lack of internet. There is little to nothing coming out, except for the narrative the state wants to have out.

This is why we don’t know all the pain, the suffering or the dire needs in the region, as the state is closing it off. The little coming out is in favour of either party and alleging the caused it. While we cannot know who did it or what went down. Both parties has reasons to dismiss and claim otherwise to look better in the public perception. To make the other party look evil or causing war-crimes. Therefore, at this point … it is hard to know, if it is this or that.

However, when the Prime Minister opened Pandora’s Box. He wouldn’t know what ills and evil would come out of it. Now there is bombs in Massawa and Asmara of Eritrea yesterday. Some claim it was missiles from Tigray, other local detonations. There has also been attacks on Gondar and Bahi Dar this week. Therefore, it wouldn’t be shocking if there was sudden explosives in Addis Ababa to attack government facilities or things dear to the heart of the Prime Minister. As a retort to the attacks in Tigray. That is natural in the circumstances of war and warfare. Not its fair to innocent civilians, but neither is airstrikes and battles in own communities done by government soldiers who are supposed to protect them in the first place.

This is why the box is now haunting the Prime Minister. He opened the lid and let it all out. The PM cannot return it now. Especially, as he whole heartedly believes he can finish his mission and contain the TPLF. He thinks he has the upper-hand as he also will be aligned with Eritrea to beat the TPLF. However, whatever Sudan decides to do will be crucial. As they are feeling the aftermath and the costs of sheltering fleeing civilians. Which are the citizens the PM is supposed to protect.

That is why there is no true winners of war. Only losers, the ones that lost less is the winner. The one who overcome the tragedies and horrific events.

Pandora’s Box have been opened and the effects of it is happening right now. Peace.