“The situation in Burundi, just like the one in the Democratic Republic of Congo and South Sudan can’t be dealt with overnight. Anybody expecting a quick fix is dreaming” – Dr. Okello Oryem

Recently during this week, the Minister of State for International Affairs Okello Oryem has said this. It is very revealing of the arrogance and the stature of the talks, the dialogue and the works done by the Ugandans in the conflicts where the East African Community (EAC) has appointed President Yoweri Kaguta Museveni to be the mediator. I never had faith in Museveni and to this day, I haven’t been wrong about that. Nothing has changed in South Sudan or Burundi, where Museveni is suppose to help changing it and get into a peaceful process. Instead it is more and more volatile.

What the grandest problem with having Museveni as mediator in South Sudan, is that his army is delivering weapons and ammunitions to the Sudan People’s Liberation Army, the SPLA and the SPLM/A-IG. They are serving the government with weapons and the technical training, while they are supposed to be there and secure the negotiations to a peaceful place. That is playing with fire and expecting to have the ability to drown it too. Your providing the opportunity for the government to continue to battle the opposition, while being a party at the table negotiating the possible peace agreement. That sounds like a bad mix of sources and interests at play. Museveni should clearly, just be a weapon brother and not a mediator. Someone who isn’t involved in delivering weapons to South Sudan, should mediate and not someone who serves guns to President Salva Kiir Mayardit. That is just wrong and has self interests in prolonging the conflict. He get to trade more weapons and ammo to the government there.

While in Burundi, the Inter-Burundian Dialogue has been directed by the President. A President that helped his fellow President to return in 2015 after a tried Coup d’etat and demonstrations against his third term. That led into bloodshed and also continued oppression of the dissidents inside Burundi. Where the dialogue haven’t materialized into anything, while the ruling regime has held a new referendum and now secured legality of Pierre Nkurunziza to to rule into 2034. Which is insane, when he entered into power, he was only allowed to have two terms, but he has changed the laws just like Museveni.

President Museveni hasn’t stopped the Burundian President and his control of the dialogue, deciding who could participate and when it could happen. Nkurunziza and his administration has totally muffled the Tanzanian chief talker Mpaka. Therefore, now that he has been part of this since 2015, as the African Union, United Nations and East African Commission have all said Museveni should do this. But they never gave him a proper mandate or done anything if Nkurunziza didn’t listen. They sent some police officers and observers at some point after 2015, but nothing has materialized.

Therefore, seems more like Museveni has been appointed and is lucky to shield his friends. Looking like he makes talks, but stalling for times. While both parties in South Sudan and Burundi are allowed to get rid of opposition, they are allowed to get weapons and use scare tactics to get rid of enemies. While he looks at in sometimes blaze some strong words. But Museveni will not act upon it, as they will do talks in secret and secure that Burundi and South Sudan get what they need. To keep the leadership, which is friendly to Museveni. Not to its people, but loyal to him. So he can be the big-man in East Africa. Peace.

The following statement was issued today by the Spokesman for UN Secretary-General Ban Ki-moon:

The Secretary-General is gravely concerned by developments in Burundi since the announcement of the electoral candidacy of President Pierre Nkurunziza and especially in the aftermath of the 13 May declaration of a coup d’état.  The Secretary-General condemns attempts to oust elected Governments by military force.  He appeals for strict respect of Burundi’s Constitution, as well as the Arusha Agreement.

The Secretary-General now urgently calls for calm and restraint.  He urges all political and security leaders to clearly and openly reject the use of violence, refrain from acts of revenge and rein in their militants.  He stresses that anyone responsible for ordering or committing human rights violations will be held accountable.  In this regard, he has full confidence that the Security Council will consider the various tools at its disposal in examining the situation in Burundi, including regarding accountability.

The Secretary-General commends the East African Community for its leadership.  He is in close contact with leaders in the region.  Through his Special Envoy for the Great Lakes, Said Djinnit, the United Nations will continue to work closely with the East African Community, the African Union and other partners in joint efforts to help resolve the crisis in Burundi.  He also urges Burundians to create the conditions for the holding of inclusive, violence-free and credible elections, as soon as possible. 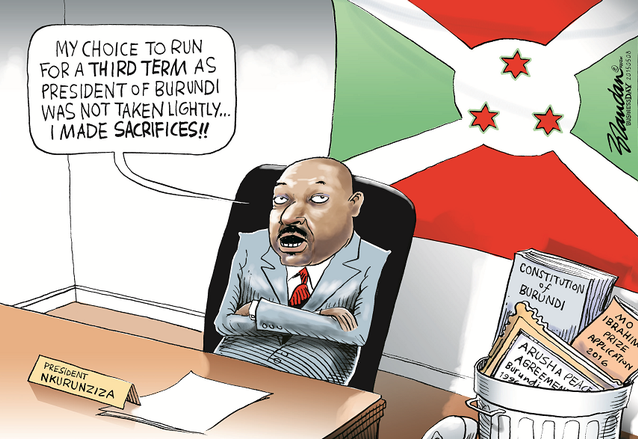 Timeline until the Coup d’etat in Burundi!

The Minister of Internal Affairs publicly stated thus: “My advice to politicians planning to vie for the presidency is to prepare to knowing that they will contest against the current President.” On 21st March 2014 both the CNDD-FDD and the Presidency spokesmen announced that is was only the party congress that was empowered to nominate a presidential candidate.He was simply hoodwinking Burundians while buying time the same way Museveni is hoodwinking Ugandans.

In January 2015 CNDD-FDD Senator Richard Nimbashe gave a press release opposing Nkurunziza’s third term bid and went further to state that the same view is held by many party members. He was immediately expelled from the party, senate and his position at the Land Commission (CNTB).

On 13th February 2014 the National Intelligence Service (SNR) issued a Memo warning the President against attempt to seek a third term. It advised him to cede power at the end of his second term for the good of himself, his family and the party. Instead, the Director of SNR Gen Godfroid Niyombare was dismissed from service.

On 1st March 2015 former CNDD-FDD national Chairman escaped from the main prison after serving for 8 of the 13 years. He later told a foreign radio station that he had been assisted by top government officials and some fighters who were in the bush. He claimed that he had supporters in all government institutions.

On 6th March 2015 the Catholic Bishop of Bujumbura Evariste Ngoyegoye preached against the 3rd term thus: “After analysis of the Arusha Peace Agreement and the constitution, by questioning our hearts as citizens who love their country and as shepherds of the church, we say that Burundians have agreed that the person elected to lead Burundi can not go beyond two terms of five years each”. The statement sent shock waves throughout the country given Burundi’s religious structure where 62% are Catholic, 6% Anglican and the remaining being shared by different smaller christian denominations and a significant number of Muslims. Right from the inception of the country’s violent history, the Catholic church was accused of being a “church of silence” for its liberal stand. The Bishop declared nine days of prayers for peace and transparency in the elections.

On 11th March 2015 CNDD-FDD Chairman Pascal Nyabenda told the BBC that opinions polls had indicated that CNDD-FDD supporters, the Bagumyaibanga (those who keep a secret) want President Nkurunziza to seek reelection. Immediately after, the party Spokesman stated that there had not been a survey for such opinion polls and that the party had other people who could stand for the presidency.

On 14th March 2015 the CNDD-FDD Council of Elders which is the highest body of the party met in the presence of President Nkurunziza and overwhelmingly rejected his third term bid.

On 23rd March 2015 a statement signed by 17 members of the CNDD-FDD top executive body urged Nkurunziza not to seek a third term. Among them were the Spokesmen for both the party and the presidency. Two days later ten of the seventeen dissenters were sacked from the party and their positions. The statement from the Presidency accused them of conspiracy to destabilise the party and the country. This is what happened with the likes of MP Ssekikubo and group and all others suspected of being pro-Mbabazi.

The Imbonerakure – a paramilitary and armed youth wing of CNDD-FDD has been at the forefront of the push for third term for President Nkurunziza throughout the country. Their equivalency in Uganda is the Crime Preventers and patriotic clubs members whom the Police is providing with paramilitary skills in exchange for supporting Museveni’s sole candidature.

On 26th April 2015 the CNDD-FDD congress nominated Nkurunziza as the party’s flag bearer. The following day 27th April, protesters opposed to his third term took to the streets of the city’s suburbs. The general elections are scheduled for May 26th 2015 while the Presidential elections are scheduled for June 26th 2015. Just as is the case with Museveni,separating the two elections is designed to give the incumbent an added advantage over other contenders.

The Constitutional Court quashed the objection to his reelection by upholding that he was eligible for reelection. The Vice President of the constitutional court Justice Slyvere Nimpagaritse who was one of the 7 man panel that determined the petition fled to Rwanda citing that the government had coerced the Justices
with death threats.

Immediately after the court’s pronouncement, President Nkurunziza registered as a Presidential candidate seeking another term in the upcoming June 2015 Presidential elections.

The International events that happen on the Burundian the third-term proposal:

On 27th February 2015 the USA Deputy Secretary of State had cautioned thus: “We hope that the presidential elections will follow the Arusha Peace Agreement concerning term limits”.

Rwanda’s President Kagame told a convention in Switzerland in reference to the protests in Burundi thus: “If your own citizens tell you that we do not want you to do that or to lead us, may be they are saying you have not done enough for them.”

Russia blocked a proposal by the UN Security council to issue a statement on the crisis in Burundi by arguing that: “its not the business of the security council and the UN charter to get involved in constitutional matters of sovereign states” said Russia’s Ambassador to UN.

South Africa’s President appointed the Minister in the Presidency Jeff Rodebe as his special envoy with a task of carrying a special message to Nkurunziza for him to step aside from running for a third term.

On 5th March the EU warned that running for a third term was risky.The AU Commission Chief said that it was clear that there shouldn’t be a third term for the incumbent adding that; “prohibition and repression of peaceful demonstrations expressing legitimate concerns would violate the conditions necessary for a credible and transparent vote”. The head of the EU election monitoring mission in Burundi expressed concern over violence.

The USA Secretary of State criticised Nkurunziza’s desire to cling to power.

The ICC Chief Prosecutor said that his office was closely following events in Burundi. The UN Special Envoy for the Great Lakes appealed for calm.

Belgium has suspended funding for the elections and support to the Police while the USA has threatened sanctions.

The UN denied earlier reports that Secretary General Moon had requested Uganda’s Museveni to intervene in Burundi: “We dont have any comment on what the Uganda authorities said and we did not put out a read out of the meeting. our efforts in Burundi involve getting the parties to engage in dialogue with each other and have nothing to do with military intervention”.