Archive for the tag “The Standard”

Kenya: Press Statement on Implementation of CBAs in the Teaching Service (04.03.2017) 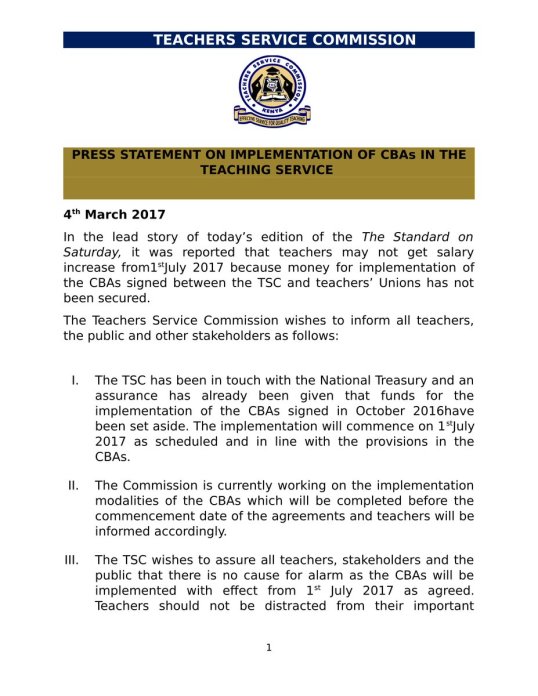 Well, there been rumored that orders from up-high that Standard Group Limited David Odongo got arrested and detained at Nyayo Embaksi Police Station in Nairobi over a story published in the Nairobian. He is now detained, but the orders from above is not yet approved or claimed by anybody, but if; I see it like this: The IGP Joseph Boinett must have gotten the ‘orders’ and used the local police chief to detain him; Sure that is the Nairobi Police Commander Japhet Koome have to follow the orders of Boinett, as Boinett followed orders from above.

My theory as the reason is that Interior Cabinet Secretary Hon. Joseph Nkaissery, who we’re in charge of detaining John Ngirachu of the Daily Nation, James Mbaka of the Daily Star and Alphonce Skiundu of the Standard Group Limited. That he got detained and questioned for writing about questionable use of government funds in December 2015. Certainly I believe he was in-charge and he is the one from ABOVE. I would not be surprised or shocked. But he has already a track-record for this kind of rash actions; so why not now?

Not that it is shocking that the David Ondongo the writer and Journalist who wrote this piece recently in the Nairobian: “Meet Kimani Rugendo, the billionaire businessman” that got published on the 9th April 2016. That was a puff piece on a business-man who has made business with bottle-water, drinks and some army contracts. So if that is worrying for the nation of Kenya, then what is?

He wrote this on his own facebook yesterday where he was critical about the Kenyan Government Spokesperson writing a Statement that was criticizing PBS for their “Kenya Corruption Documentary Series”. Where he was writing: “Eric Kiraithe, being a spokesman doesn’t mean you have to speak even when you have nothing to say. Are you mad? Do you live in Kenya? Get off your ivory tower and come back to reality. If I posted your number here so that Kenyans can call you every time a cop demands a bribe from them, you will run mad. Your phone won’t stop ringing. Do you know how much Kenyans are suffering? So now, Mr Kiraithe you want to blame the civil society for the mess, you and your fellow cops put us into? Stop taking Kenyans for fools. You must have worked hard to be in the position you are right now, stop cheapening yourself by making statements, that you, deep in your heart know isn’t true. Can you look at your children, straight in their eyes, and tell them the video by PBS is fiction? I also don’t like my country being portrayed negatively by foreign media, but the truth can’t be hidden. You have some good officers in the force, but majority are rotten to the core. ‪#‎EndOfRant” (Odongo, 14.04.2016).

So do I believe that he was detained for a puff piece in the Nairobian on the 8th of April? No not really, because his own will and his own words on Social Media as a writer and journalist will be recognized just as the words of Charles Onyango-Obbo (COO) quotes on Twitter will create views and questions on Policy. The same reach does not David Ondongo have, but he still have his space and his followers. So I believe that, that statement on Social Media is more worthy of creating some fuzz, then the piece on the business-man who trades bottled water and also investing in Sterling Craft Kenya Limited that they are starting to make ‘Water Tanks’ not tanks for the Kenya Defense Force (KDF). So the puff-piece must be used for deflection for the statement on the Facebook yesterday. As the Government got the whiff of his ideas and attack on the Kenyan government, that should be the case; not the puff-piece. Peace.

Nkaissery tells journalists: “You aren’t off the hook yet” (Youtube-Clip)

“Interior Cabinet Secretary Joseph Nkaissery says the three newspaper journalists who were being investigated for allegedly publishing sensitive government information are not off the hook yet. Nkaissery spoke to Citizen TV barely a week after nation Parliamentary Editor John Ngirachu was arrested” (Kenya Citizen TV)

My letter to the Minister of Interior Affairs of Kenya Hon. Joseph Nkaissery on detaining John Ngirachu

Kenya: Nation journalist arrested over a story on graft in Interior Ministry (Youtube-Clip)