Trump Administration planned from July 2017 to build a migrant tent-camp at Guantanamo, Cuba! 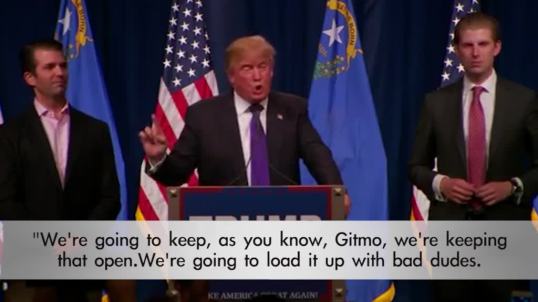 On the 7th July 2017 the United States Navy published a Modification Notice on the U.S. land on Cuba, the famous Guantanamo. Again, a new administration has plans to use this land and the parts of island to good use. Seemingly for other purposes than keeping non-trialed terrorist suspects. They are planning to immigrants and asylum seekers put on the Cuban. People who are fleeing camps and war-zones already to be transported to another facility under United States jurisdiction.

The Navy is planning this:

So the Trump Administration together with the Navy, the other agencies really has a plan of moving immigrants and asylum-seekers to Guantanamo. To make sure their stay in the United States will be in tents, instead of trying to get them integrated into society. The ones who are worried about the public business into building of the camp and the price of installation.

That the United States can plan to move and create a temporary space for people in camps on the outside of their territory, to scare more from not coming and also making it worse for their moral obligations to facilitate for their refugees. Just like Americans has said it is problematic with the state of camps in Italy, Greece and Turkey. This one will not make it better, especially when it is a created affair and professional enterprises creating it. As the tenders and government procurement of the camp are clearly planned affairs on how the refugees will leave.

That the United States are planning a tent-camp not far from the U.S. state of Florida and on leased land on Cuba, is extremely bad and offensive. Especially, since many of the refugees are leaving from places that the Americans has attacked with military operations, where the United States has supported drones, where U.S. Soldiers has killed and created turmoil in the nations. Therefore, as moral obligations to where they sent troops and made a fuzz, they should accept that people are fleeing these wars and conflicts for a safe-haven in the Untied States.

Therefore, that the Navy and the United States government plans a tent-camp on territory of Guantanamo, Cuba for 13,000 migrants and 5,000 support personnel. This means they planning a small-town size of tents and needed necessities for them. Instead of taking care of them through more friendly neighborhood, they are now planning to drop them off in tents. Hope they get tired of the meager lifestyle to go home. Even if it means leaving peace and going back into war-zones and dictatorships.

The moral fall of the United States is clearly there. They could have used other means, used other types of facilitation for migrants. Instead of making provisions without creating a permanent tent-camp for them. Usually, they are put-up because the need for it.

Why I find it strange that UNHCR from 2007 says: “Family tents may be useful and appropriate, for example, when local materials are either not available at all or are only seasonally available or for refugees of nomadic background. The life-span of an erected canvas tent depends on the manufacturing, length of storage before deployment, as well as the climate and the care given by its occupants. Where tents are used for long durations, provisions for repair materials should be considered. Larger or communal tents may serve as transit accommodation while more appropriate shelter is constructed” (…) “In general, tents are difficult to heat as walls and roof do not provide sufficient insulation. Therefore, tents are not suitable as cold climate shelters, but if there is no choice, they can save lives and bridge the time until more suitable shelters are established” (UNHCR P: 221-222 – ‘ Handbook for Emergencies – Third Edition’ February 2007).

So, when the U.S. Government puts up a tents, that is not suitable for long-term solution. Because even the UNHCR says it is temporary, since the tents are not insulated. Therefore, Guantanamo tent-camp for the migrants coming to the US. Clearly, the US state will not build a proper place for the migrants, but the people fleeing should get proper shelter. Not be put in tents, but build more suitable shelters. Especially, when the US can build proper housing for the migrants. Since they are moving them from main-land US to the area controlled by US on Cuba. Peace.