“He did not care for the lying at first. He hated it. Then later he had come to like it. It was part of being an insider but it was a very corrupting business.” – Ernest Hemingway, For Whom the Bell Tolls

You who follow my blog know I does this once in a while to prove that corruption isn’t a one area thing, it’s international and got no borders. Always somebody who want to pocket some easy and quick money, that is because it’s easier then actually work for the money in the end. This time around there is a few Island cases two cases on the Dominican Island and one that origins from Mauritius. The World Bank president is addressing taxation and how bad practices can destroy economic situation in low-developed countries. In South Africa there been a shady deal between Statehouse and the Hitachi, the ANC are continuing to do this and the old cases that has hurt the regime like he army deal in not to distance past. And a UN environmental negotiator who has a few counts of tax fraud so that the United Nation has even some people who got questionable actions. No place in the world you can walk anymore without insider, but it was a very corrupting business. Seems like a worry from Dominican Republic to the New York UN office. Take a quick look!

In the Dominican Republic:

“The alleged bagman in the State Works Supervisory Engineers Office (OISOE) on Monday said the money provided to contractors to conclude construction of schools came from the beleaguered agency´s technical director, Jose Florencio” (…)”Alejo Perez said the money was sometimes handed out at the schools or at OISOE headquarters, in presence of de los Santos´ and the engineer in charge of the work. “These payments were sometimes made in cash or checks.” (…)”When asked what de los Santos did with the money he gave to Florencio, Alejo said: “They gave it to the engineers on loan to finish the work, which was withdrawn from a line of credit” (Dominican Today, 2015).

There is even another recent case on the island:

“The embezzlement case against ruling PLD party and senator Felix Bautista has unleashed a crisis of confidence among Supreme Court justices Frank Soto and Miriam German, who in a letter dated September 21called her colleague unfair, disrespectful and abusive” (…)”The Supreme Court on September 22 set a hearing for Oct. 21 to hand down the ruling on the prosecution´s appeal against Bautista´s acquittal by a lower court” (Dominican Today, 2015). 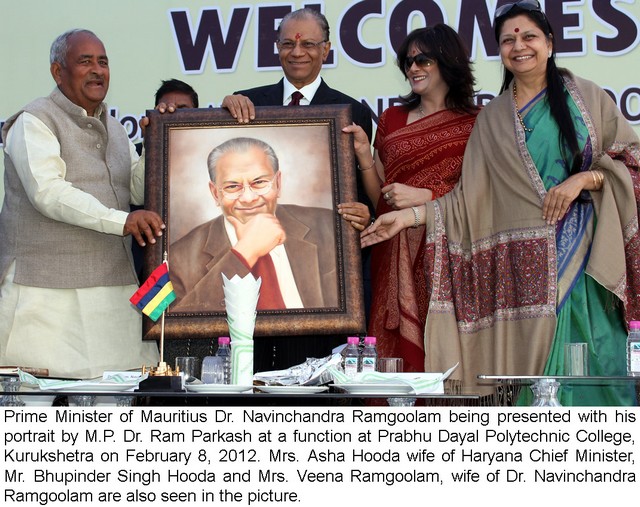 More trouble in another Island Paradise:

“Senior figures from the island’s new government visited Britain in the summer to lobby for a National Crime Agency (NCA) investigation into the 68-year-old British passport holder for alleged corruption in Mauritius” (…)”The NCA is believed to have contacted the island authorities for details of credit cards found in Mr Ramgoolam’s safe that included two Centurion American Express cards given only to high-spenders. Mr Rangoolam, who owns a Rolls-Royce with a personalised number plate in London, has vowed to open his accounts to independent scrutiny in an attempt to persuade the NCA that he owns no property in Britain and only legitimately amassed savings. Banks in the UK shut down his accounts after the arrest in February” (…)”Any British investigation into Mr Ramgoolam would fit the profile of the more than 20 high-profile politicians being targeted by the National Crime Agency’s International Corruption Unit (ICU)” (Fellstrom & Peachey, 2015).

“Some companies use elaborate strategies to not pay taxes in countries in which they work, a form of corruption that hurts the poor” (…)”We reject “trickle-down” notions that assume that any undifferentiated growth permeates and fortifies the soil and everything starts to bloom, even for the poor” (…)”Developing countries must also construct more equitable, efficient and transparent tax collection systems.  IMF Managing Director Christine Lagarde and I pledged a few months ago that our organizations will do all we can to help countries collect more taxes more fairly” (Tax Justice Network, 2015).

A deal between Hitachi Ltd and the Government of South Africa:

Hitachi allegedly sold a 25-percent stake in a newly created South African subsidiary to Chancellor, a local South African company serving as a front for the ANC, South Africa’s ruling political party. This arrangement allegedly gave Chancellor and the ANC the ability to share in the profits from any power station contracts that Hitachi secured. During the bidding process, Hitachi was allegedly aware that Chancellor was a funding vehicle for the ANC but nevertheless continued to partner with Chancellor and allegedly encouraged Chancellor’s use of its political influence to help obtain the government contracts” (…)”Hitachi was ultimately awarded two contracts to build Medupi and Kusile power stations in South Africa and Hitachi’s lax internal control environment allegedly enabled its subsidiary to pay Chancellor approximately USD 5 million in “dividends” based on profits derived from the contracts. Through a separate, undisclosed arrangement, Hitachi allegedly paid Chancellor an additional USD 1 million in “success fees” that were inaccurately booked as consulting fees and other legitimate payments without appropriate documentation” (Trace International, 2015).

“HOW CONDUCT WAS DISCOVERED

On 10 November 2006, the Mail & Guardian published an article, entitled “the ANC’s New Funding Front,” exposing Chancellor as a business front set up by the ANC to seek profit on its behalf, generally by acquiring “empowerment” stakes in a wide range of businesses seeking state procurement” (…)”On 19 January 2007, Financial Mail published an article, entitled “Finacing the ANC, Untold millions,” quoting the admission by Kgalema Motlanthe, ANC Secretary General, that Chancellor was an “ANC vehicle” that existed for the sole purpose of funding the ANC” (Trace International, 2015).

A little more of the case:

“The story of how Hitachi bought political influence, in order to win a $5.6 billion power station contract, calls into question not only the integrity of a massive company with a global reputation, but also the integrity of the South African government” (…)”A $19m fine for a company of Hitachi’s size, when they have won a $5.6 billion tender, is laughable and certainly does not help with law enforcement efforts to stamp out corruption” (Kenney, 2015).

Chicago the place of Al Capone and other villains of old there are new corrupt faces:

“Charges that Byrd-Bennett steered more than $23 million in work to Supes and Synesi Associates “in expectation of hundreds of thousands of dollars in bribes and kickbacks,” according to Fardon’s office” (…)”Byrd-Bennett, 66, faces 15 counts of mail fraud and five of wire fraud. Solomon, 47, faces those charges, plus alleged bribery and conspiracy, as does Vranas, 34” (…)”Her attorney confirmed that plan in a brief statement:”Barbara Byrd-Bennett will plead guilty to charges in the indictment,” Michael Scudder, a partner in the Chicago office of law firm Skadden Arps Slate Meagher & Flom,” said. “As part of accepting full responsibility for her conduct, she will continue to cooperate with the government, including testifying truthfully if called upon to do so” (Hinz, 2015). 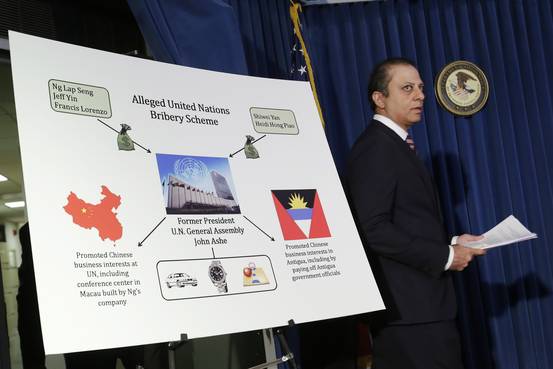 Even in the UN:

Who knew that a negotiator in the UN for clean-energy and environmental issues has been getting accused on 5 counts on Tax fraud, here are brief information on the case.”A former president of the U.N. General Assembly “sold himself and the global institution he led” by allegedly pocketing more than $1 million in bribes to finance a luxury spending spree, according to a federal prosecutor” (…)”Ashe is accused of underreporting his income by more than $1.2 million, prosecutors said” (…)”ASHE also then began soliciting additional payments from LORENZO to pay for the installation of a private basketball court at ASHE’s house in Westchester County. In addition to agreeing to pay for ASHE’s family vacation and basketball court, LORENZO began paying ASHE’s wife, as a “climate change consultant” for NGO-1, in the amount of $2,500 per month” (Greenfield, 2015).

If this wasn’t interesting then something must be missing. The corruptness is worrying that now even cracks in the UN system, that the World Bank President talks like he does is natural, that their been shady deals in South Africa isn’t new anymore; More like how much the deals are between the Government of South Africa between a Certain Company and then which MP or Minister who earns extra for it. The Mauritius clear-out is happening with a former PM having issues while the former President is behind bars, something is fishy on that island. Another island has two brief and new cases of corruption and that is on the Dominican Island. But the whole total of money discussed in these matters is big and terrifying for the state of the places and people involved in the matter. Like the quote from Hemmingway, I am sure that the persons are over time more easily doing the corrupt business and actions. Because over time it got easy and made the persons feels like insider. Though it still not right! Thieving and stealing is the same, and corruption is a malpractice and a form of stealing money. Peace.