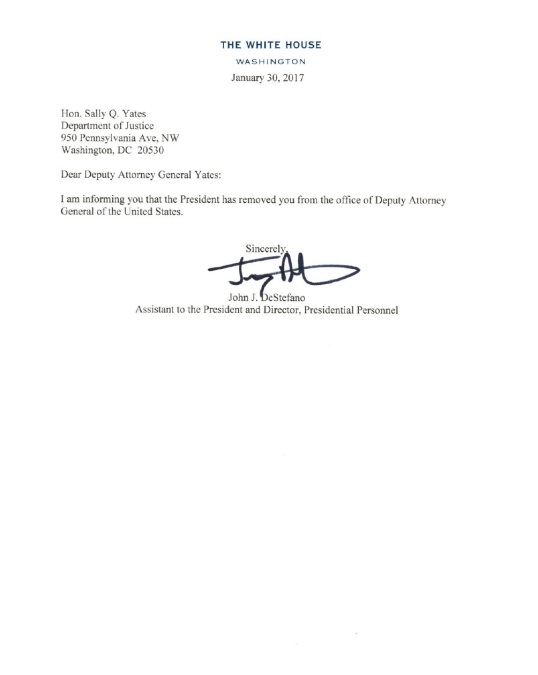 President Donald Trump tries to deflect the Federal Bureau of Investigations Russian Probe into the Trump Campaign and United States Election in 2016. That must be seen since he the day after the FBI Director James Comey. He has tried to fill the news cycle with new movement, that goes back into the campaign spin, that even Sean Spicer hasn’t the capacity to hide behind. This is worrying if the American society buys into the quest Trump has with this new measures, while the acting FBI Director will continue the probe. Certainly, the case will not go away, even if Trump lies out of his teeth to the NBC, as he did earlier today.

“LESTER HOLT: He asked for the dinner?

DONALD TRUMP: A dinner was arranged, I think he asked for the dinner. And he wanted to stay on as the FBI head. And I said I’ll, you know, consider and we’ll see what happens– But we had a very nice dinner. And at that time, he told me you are not under investigation. [OVER TALK]

LESTER HOLT: That was–

DONALD TRUMP: Which I knew anyway.

LESTER HOLT: That was one meeting. What was it, what were the other two? [OVER TALK]

DONALD TRUMP: First of all, when you’re under investigation, you’re giving all sorts of documents and everything. I knew I wasn’t under and I heard it was stated at the committee, at some committee level, that I wasn’t. Number one.

LESTER HOLT: So that didn’t come directly from him?

LESTER HOLT: Did you call him?

DONALD TRUMP: Uh, in one case I called him and one case he called me.

LESTER HOLT: And did you ask, “Am I under investigation?”

This is typical way of lying, putting different issues together and mixing it, while not disclosing or answering the interviewer. That President Trump knew is strange and that he claims Comey lied, is evident. Because Trump doesn’t want to lose face. Therefore, he called in this interview to try to look smart and deflect the grand issues arising from the sacking. It is not weird that he claims not be under investigation, since the FBI has had this probe for a while and different agents at the San Francisco, Pittsburg and Washington D.C. headquarters has worked on different parts of the investigation. So Mr. Trump is lying out of his teeth.

That is why he suddenly starts wasting public funds looking into ghosts and non-issues like fraudulent elections that the President has claimed all along, therefore now that he is catching a shit-storm of epic proportions. He has to try to send messages of other problems. So that he hopes the media looks away from the investigation that the FBI will continue to pursuit. Even with the firing of Comey and scandal of reasoning for doing so.

Therefore, this mission for a Presidential Advisory Commission on Election Integrity, which just happen to be executed today: “By the authority vested in me as President by the Constitution and the

laws of the United States of America, and in order to promote fair and honest Federal elections, it is hereby ordered as follows: Section 1. Establishment. The Presidential Advisory Commission on Election Integrity (Commission) is hereby established” (…) “Sec. 3. Mission. The Commission shall, consistent with applicable law, study the registration and voting processes used in Federal elections. The Commission shall be solely advisory and shall submit a report to the President that identifies the following:

(a) those laws, rules, policies, activities, strategies, and practices that enhance the American people’s confidence in the integrity of the voting processes used in Federal elections;

(b) those laws, rules, policies, activities, strategies, and practices that undermine the American people’s confidence in the integrity of the voting processes used in Federal elections; and

So by all means he tries to start a Commission to safe himself on the grand-issue has claimed all along, that the election was filled with frauds, even if he won it. Like he has been proud of all the time, and to top it all off, he delivered yet another one connected with the whole election. Since there been discussed the leaks and hacking of the elections, therefore he had to order on Cyber Security, even if he has no knowledge of what that entails or envisions how this might implicate the current freedom of the internet.

(a) Policy. The executive branch operates its information technology (IT) on behalf of the American people. Its IT and data should be secured responsibly using all United States Government capabilities. The President will hold heads of executive departments and agencies (agency heads) accountable for managing cybersecurity risk to their enterprises. In addition, because risk management decisions made by agency heads can affect the risk to the executive branch as a whole, and to national security, it is also the policy of the United States to manage cybersecurity risk as an executive branch enterprise” (…) “Sec. 2. Cybersecurity of Critical Infrastructure.

(a) Policy. It is the policy of the executive branch to use its authorities and capabilities to support the cybersecurity risk management efforts of the owners and operators of the Nation’s critical infrastructure (as defined in section 5195c(e) of title 42, United States Code) (critical infrastructure entities), as appropriate” (…)

“Sec. 3. Cybersecurity for the Nation.

(a) Policy. To ensure that the internet remains valuable for future generations, it is the policy of the executive branch to promote an open, interoperable, reliable, and secure internet that fosters efficiency, innovation, communication, and economic prosperity, while respecting privacy and guarding against disruption, fraud, and theft. Further, the United States seeks to support the growth and sustainment of a workforce that is skilled in cybersecurity and related fields as the foundation for achieving our objectives in cyberspace” (Executive Order – Strengthening the cybersecurity of Federal Network and Critical Infrastructure, 2017).

For a person like me, this seem like a tactic for President Trump to get the discussions being on the Executive Orders, instead of the Russian Probe. Like people will forget that he is investigated by the FBI. Since he trying to get other people to look into the elections and the issues created by the election. Therefore, he now on the same day after the sacking, has to do all of this. Not build roads or anything constructive for the Republic. Instead, he has to gain attention on the other problems that was also during the election. Some that was only in his mind and imagination. So don’t expect any deep findings of irregularities, because I don’t expect them to look into the laws in the different states that often disqualify minorities and people who is not well-informed about the laws on how to register to be voter.

Still, the President Trump will lie, he will not accept the probe and subpoenas, which is about Michael Flynn and other Trump Campaign associates. We will not know for a long while the end-game of this. But there will be more documentation and more findings of the connections between Moscow and Trump. He can blindly lie to the fans of him and the Republican party. Still, the rest of us doesn’t have faith in a man, who cannot speak truthful or act reasonable.

President Trump are really in trouble, still not discussing legislation or trying to get it passed through the House of Representatives or the Senate. Only the Paul Ryan’s draconian health care bill. Therefore, he has to write Executive Orders, since he lack ability to work with others or even trust others. Since he knows and the world knows, he is under investigation by the FBI. That will continue, but don’t believe the hype of these orders today. They are used as pawns to try to change the agenda and questioning the firing of Comey, the Sally Yates revelations and the Russian probe. Peace.