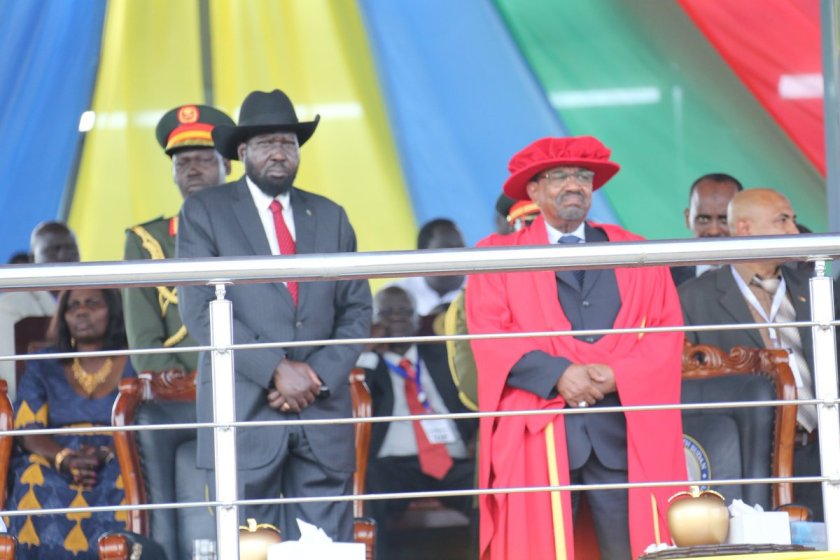 “You are blacks, no blacks can stay here, and no black can stay in Sudan…The power of Al BASHIR belong to the Arabs and we will kill you until the end” – Omar Hassan Al Bashir

There is very little peaceful ways in the ways of Sudanese President Omar Hassan Al Bashir, who for all strange reasons was getting an honorary doctorate of Philosophy in Peace and Diplomacy. The same guy that has been violently oppressing his own people. The man that has caused massive bloodshed in Darfur, Kordofan and the Blue Nile. Also, supporting proxy-war inside of South Sudan. Even keeping the Civil War with South Sudan as long as he could. To have the whole Republic as his and not have parts of it seeding from Khartoum.

Will show that some proof, but first lets shows the utter nonsense!

“Sudanese President Omar Hassan Al Bashir has been awarded an honorary doctorate by the University of Juba on Wednesday in recognition for his role in bringing South Sudanese warring parties to sign a peace deal. University of Juba Vice Chancellor Proffessor John Akech while presenting the award said the university’s Senate decided to honor President Bashir with a Doctorate of Philosophy in Peace and Diplomacy from the Institute of Peace, Development and Security studies” (Radio Tamazuj – ‘President Bashir awarded an honorary degree at University of Juba’ 31.10.2018).

Now, that we have seen what the University of Juba did on the Peace Celebration in South Sudan today. As they celebrated the newly minted peace deal and even gotten SPLM/A-IO leader Dr. Riek Machar to return the capital from exile. Clearly, there are hope in the air and we can hope. Even as many parts of the party today, haven’t been all truthful and even following the cease-fire. As the CTSAMM have shown violations in Wau and other parts of the Republic since the latest peace agreement.

However, this is more about the Doctorate of Peace, that first took over his Republic by armed coup d’etat in 1989. Al Bashir have been in-charge since then and that is soon 30 years. That the man given this doctorate are in-charge of the massive killings and creating prolonged war-zones. This isn’t just words, but the civil war, which started before he took power in 1983, but he kept it going until 2005.

The reports of the costs of lives was 2.5 millions who died either by the Sudan Government Forces or by Sudanese People’s Liberation Army. This is the numbers of what was lives taken within today’s South Sudan. However, there are also studies into the cost of live within today’s Sudan, which: “Burr published a second working document in 1998,[xvi] following similar methodology, and adding information about government aerial assaults, and attacks on the Nuba Mountains, in Equatoria, Upper Nile and Bahr al-Ghazal, which, he wrote, ‘suggests that no fewer than 600,000 people have lost their lives since 1993” (Mass Atrocity Endings – ‘Sudan: 1985 – 2005’ 07.08.2015).

This is not mentioning the reported numbers of 38,000 died because of his conflict in Darfur, 2,8 million displaced by this. That is why it is hard for me to take University of Juba seriously, when they offer someone of the stature of Al Bashir a doctorate in ‘Philosophy in Peace and Diplomacy’. If it was practical joke or satire. I would have understood. But this man is legendary war-lord, who has blood on his hand. He has ordered direct killing and destruction of communities. Just because he could and had the ability to it.

No one that has caused this much bloodshed, to stay in power deserves a doctorate of this kind. If it was doctorate in warfare and combat, even in militia training. It would have made sense. But right now, it is just foolish and a mockery of the University of Juba. The Professors there cannot think in their right mind.

They have made a butcher and meat-lover, saying that he is vegan for the day. Let’s get real, if the Sudanese President had the option, he would continue the proxy war to secure the profits of the oil-fields in South Sudan. We know that and that is why he back-in-the-day sponsored the Nasir Rebellion. Peace. 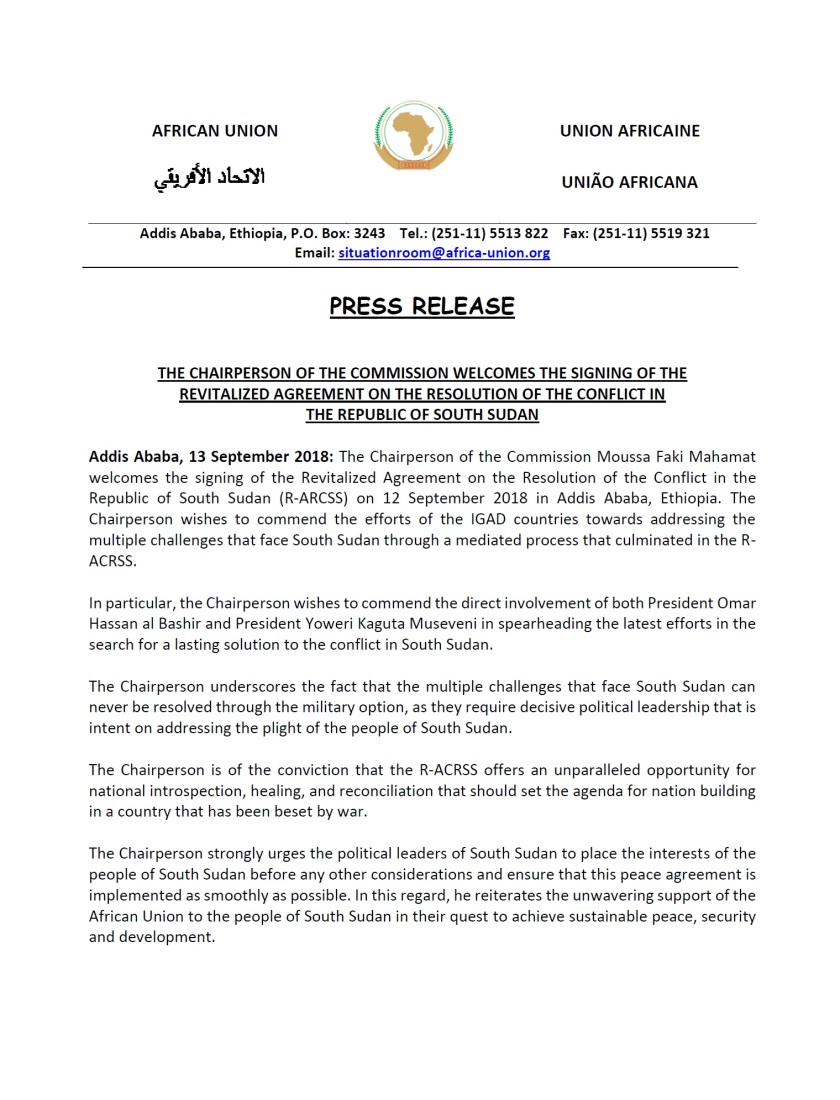 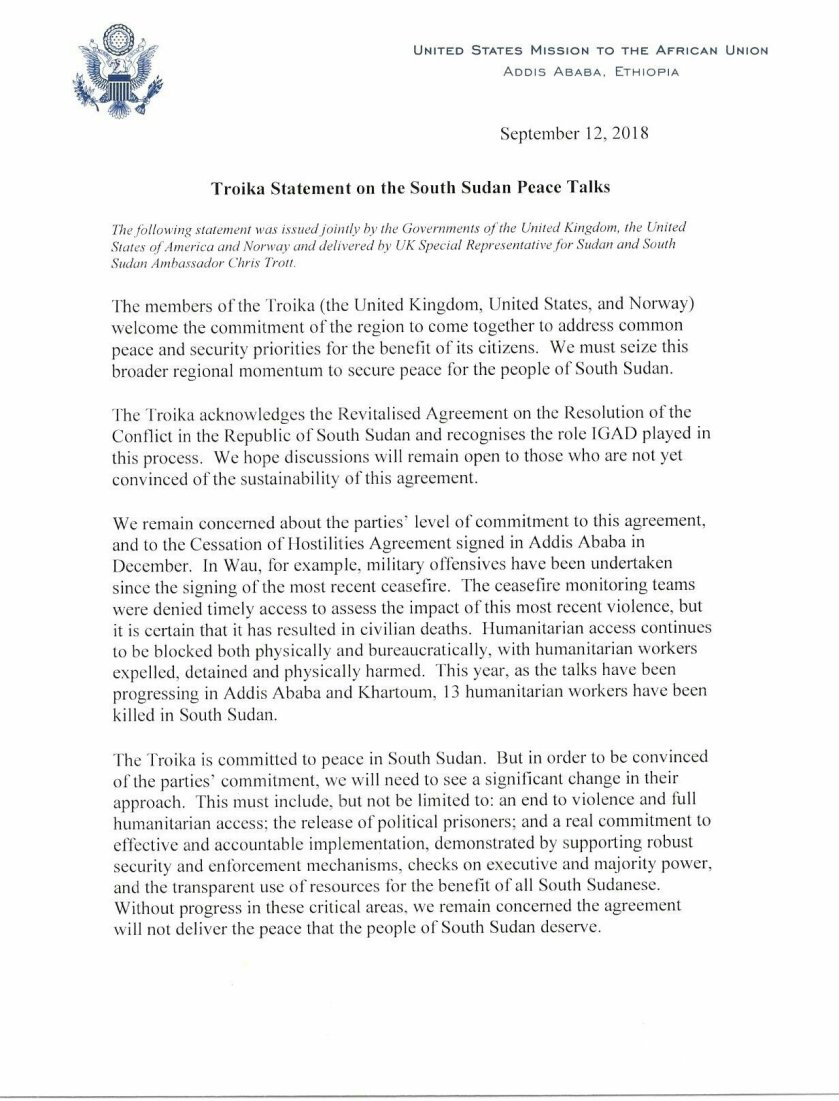 It is important that any political solution takes into account the needs of everyday South Sudanese people, especially marginalized groups like women.

GENEVA, Switzerland, September 10, 2018 – The signing of a peace agreement between South Sudan’s warring parties is a hopeful sign that a sustainable solution can be found for a conflict that has had tragic consequences for millions of civilians.

It is important that any political solution takes into account the needs of everyday South Sudanese people, especially marginalized groups like women, said Dominik Stillhart, the global director of operations for the International Committee of the Red Cross (ICRC).

“The human cost of continued conflict in South Sudan has led to humanitarian catastrophe inside the country. That’s not hyperbole. That’s fact,” said Stillhart, who visited South Sudan last week to speak with residents and view ICRC’s operations.

Civilians should not bear the brunt of conflict, but in South Sudan they often do. So far this year, the ICRC has admitted 69 children and 47 women into our hospitals with injuries from weapons. Untold thousands of children are being deprived of school and many are separated from their families.

The conflict has been particularly brutal on women. They are left to fight for the survival of their families, fleeing with their children and foraging for food. Thousands have endured rape or sexual assault. The ICRC calls on those at the negotiating table to make sure any agreement takes into account their needs, as well as those of other marginalized groups.

“Without a ceasefire, the past five years tell us that scorched-earth tactics will likely continue, as we have seen continuous and systemic disregard for international humanitarian law and the civilians that the law protects,” Stillhart said. “Aid organizations can provide relief but cannot end the violence and displacement the South Sudanese people have endured for five years — only a political solution can.”

• Together with the South Sudan Red Cross this year we have facilitated more than 29,000 phone calls between family members and their loved ones. We have also physically reunited 33 people, including children, with their families.

• We spread knowledge and respect for International Humanitarian Law. More than 1,500 military personnel and nearly 1,500 police personnel have been trained this year.

• The ICRC has been permanently active in South Sudan for 38 years. 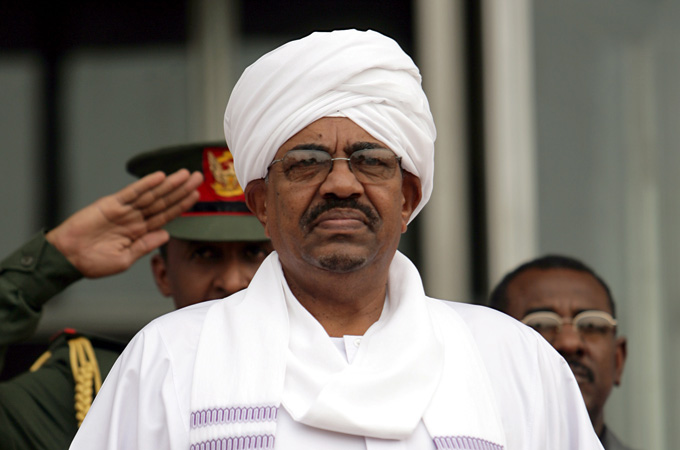 Today’s news from Khartoum all makes sense, as the bread-riots and rising prices are now hitting the government, as the President of Sudan, Omar al-Bashir had to dissolve and cut-back on government spending, this is happening as the Khartoum government have been more involved in the Peace Process of Juba and South Sudan, than usual. Surely, there are with some reasons. I will get to those, but as there are some clear indications why, now as the Sudanese government clearly lack fiscal funds and needs to revise their budgets. As the Cabinet is shrinking in.

Because, there was vital part of the Khartoum Declaration of 25th June 2018, that bugged me like crazy and now that Khartoum is clearly going into a deep economic struggle. Those parts of the agreement makes more sense and why Al-Bashir made himself such a sponsor of the agreement between the SPLM/A-IG, SPLM/A-IO, SPLM-FPD and the SSOA,

What was striking to me, was this article from June 2018:

“To delegate the government of Sudan to take the necessary steps towards securing oil fields in South Sudan in coordination with the Government of South Sudan, and to work on the rehabilitation of the oil fields with the view to restore previous levels of the oil production. In this context, the outstanding issues between the two sisterly countries of Sudan and South Sudan related to oil sector shall be resolved” (Points of Framework Agreement, 25.06.2018).

Today, it makes even more sense, as the rise and production of oil, that will go through the pipelines will add revenue to the state on the brink of economic tragedy. Because, Khartoum cannot be in a good place economically, when they are scaling down the size of the government and ceasing ministries. That shows that the Sudanese are lacking fiscal funds and are in dire need of new revenue sources. However, that can come from South Sudan, if they get their act together, have peace and have less internal fighting. Than the pipelines can provide Khartoum steady rates of the flowing oil to Port Sudan and ensure petro-dollars. That would save the day and the face of Al-Bashir.

That is why he has taken a further stake, as he needs the oil revenue now, as his state are lacking funds. Because no sensible state overnight, makes order to scale-back without some lack of fiscal funds to run the operations of these ministries and pay for the civil servants there.

We can just await riots and trouble, unless Al-Bashir gets sudden funding. This is the writing on the wall and the reasons for sudden involvement in the peace process are now more evident too. As he needs all the barrels of oil he can, because that can save his fiscal revenue and ensure all his allies are paid. Peace.

The judges delivered their verdict today and handed down lengthy prison terms for murder, rape and other crimes.

JUBA, South Sudan, September 6, 2018 – The finding of a military court that 10 soldiers were guilty of committing violence against civilians at the Terrain Hotel in Juba, South Sudan, has finally delivered justice for the survivors and the family of the journalist murdered in the attack.

The judges delivered their verdict today and handed down lengthy prison terms for murder, rape and other crimes. The court also ordered the government to pay damages to the victims.

The victims and survivors of this horrific attack in July 2016 deserved justice and that has been served today. However, according to evidence raised during the trial, questions remain about whether accountability for these crimes reached high enough up the chain of command.

While the guilty verdicts handed down will not take away the pain and suffering caused by the appalling acts of violence carried out by these criminals, it is important that they have finally been held publicly accountable. The outcome of the trial also sends a powerful message to other would-be offenders, including members of the armed forces, that they will be prosecuted and punished for such violence.

The witnesses and survivors demonstrated true courage and patience by participating in the judicial process which began back in May 2017. There were some significant challenges throughout the process, including the detention conditions of the defendants, some impediments to the defendants’ access to counsel, and the trial of these crimes against civilians in a military rather than civilian court.

However, as the trial progressed, there was a willingness to adopt new procedures, including allowing testimony to be given via video link to facilitate witnesses and survivors unable or unwilling to attend the trial in person and using closed sessions to prevent public disclosure of witness’ identities.

This trial brought to justice offenders involved in the particular case of the Terrain Hotel where international workers were targeted. However, there remains the broader problem of widespread sexual and gender-based violence against South Sudanese women and children. Most cases go unreported and there remains widespread impunity.

UNMISS is committed to working with authorities in South Sudan to address some of the challenges observed during this trial and support efforts to improve the independence and effectiveness of the justice system so that many more victims of sexual and other violence can also have their day in court.