Bugisu region which this government has relegated to the periphery.

There is no new road that has been opened in the region. Yet, like all Ugandans, every person in Bugisu carries a debt of 1million shillings because of the debt burden, recklessly accumulated by this government.

The people in Bugisu are poor, not because they are lazy. Rather, they are an extremely hardworking and truthful people. They like organised systems where they can diligently serve. They can never thrive under a mafia corrupt system.

In 1962, before the British granted Uganda independence, they questioned whether Ugandans had financial capacity to govern themselves.

To alley British fears and excuse, Bugisu contributed £300,000 and Buganda £500,000 to show we could manage ourselves.

Ideally, it’s Bugisu and Buganda which guaranteed Uganda’s independence. But Bugisu has been sidelined.

The five years Sironko district was under the FDC leadership, it was always ranked amongst the best performing and corruption free districts. Today, the story is different.

That is why, the fanfare in Sironko will not detract some of us, we shall continue to mobilise and educate people about the dangers of a corrupt and disorganised regime.

We shall continue to mobilise people for change, for the liberation and true independence of Uganda.

I welcome everyone to Budadiri West.

Under a normal political situation, a nation’s day of independence should be euphoric: citizens and leaders alike join together to celebrate their triumph overcolonialism, remembering the day when they became a nation led and governed by their own with their mandate.

Frankly, Uganda’s independence heroes had a natural and legitimate right to free Uganda from a century of British dominance. Colonialism had many unacceptable effects that took away many citizenship rights; political rights to determine who governs them, economic rights to determine who controls their resources and use them equitably and have control over state institutions that served the rulers than the people. The most pernicious effect of colonialism was the control of the mind and distortion of our culture creating in the people a slave mentality.

In 1962 however, we inherited a functioning, though enclave, economy with an effective transport (road and rail) system, sufficient hydro electric power supply, a sizeable extractive and manufacturing industry, a strong agricultural sector and functioning social services.

Post colonial Uganda has however not only maintained the inherited political system that denies citizens the fundamental rights and freedoms and maintained the slavery mentality maintaining a master – slave relationship , it has also destroyed the enclave economy, destroyed agricultural production , infrastructure, social services and the extractive and manufacturing industry. It also introduced and entrenched corruption, nepotism, tribalism, cronyism etc. As a result, Uganda’s 54 years have been marked by : Political instability (no leader has handed power to another leader), violence, a failed economy and social strife. The duty of our people now therefore to reclaim the country to get back our rights, freedoms and resources through struggle and hence the DEFIANCE CAMPAIGN; the people’s non violent struggle. This will lead to a post NRM transition in which we shall carry out Constitutional Reforms, Rebuild State Institutions, engage in Truth Telling, Accountability and Reconciliation followed by Free and Fair elections.

As Ugandans, we have a solemn duty to reverse the plunder and destruction of our country. We must realise though that this call to national duty is not a call to an easy task. It has to start with changing people’s mindset and perceptions about national and state power relationships. The process can only be difficult if people submit. We have to defy and refuse to cooperate with the dictator. The more we cooperate, the more he enjoys the use of tools of coercion and maintains the illegitimate rule over us.

Luckily, like it has been in all societies where people have had a demand for standing up for their rights to defy and defeat dictatorship, Ugandans are resiliently focusing their energies on dismantling NRM and Mr. Museveni dictatorship. I see many organised groups of Ugandans that have taken on the call to bring about change in our country. We can only join them. Then Ugandans will truly celebrate independence. 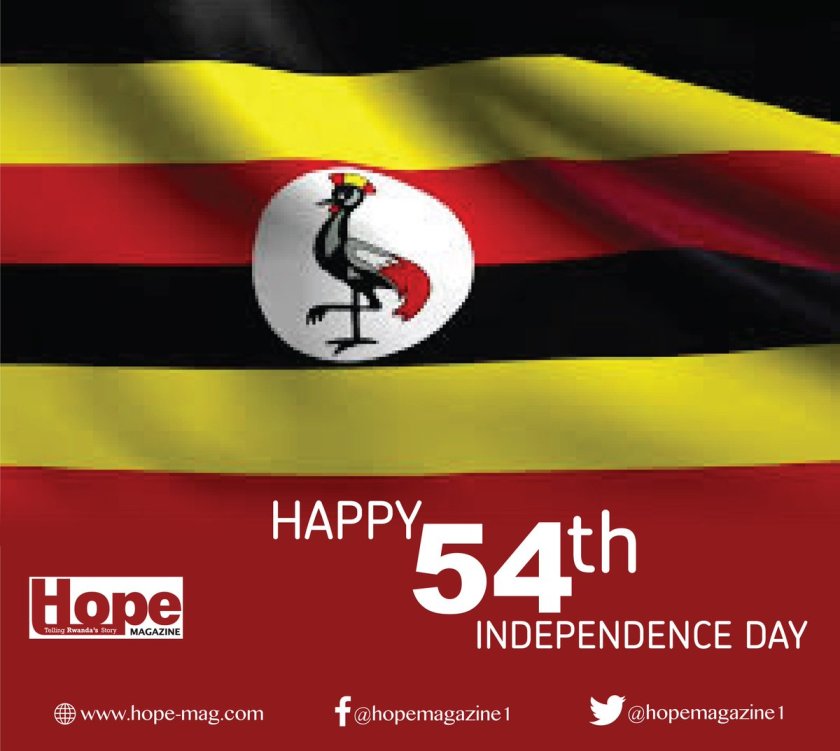 “Happy 54th Independence celebrations. I salute all Ugandans and congratulate you on this auspicious occasion” – Yoweri Kaguta Museveni

Today, the National Resistance Movement and their junta regime under President Musveni is supposed to celebrate 54 years of Freedom and Liberty from the British Empire. Today there are supposed to be both Celebration Parties from the Government, but also the Opposition Party Forum for Democratic Change, something they even asked permission from the Police Authorities. Instead they are either behind house-arrest or like Dr. Kizza Besigye who tried to leave his home in Kasangati, Wakiso District; where taken from his gates and the put in the notorious “black van” or “torture van” and reported to spend the day at the Naggalama Police Station in Mukono. Something that has happen frequently in the recent months.

Just as the NRM and their President are celebrating giving away awards to the Uganda Cranes and other dignitaries on this day in Luuka District. The Police are house-arresting several leaders in the FDC, because they fear the level of popularity and their connection with the people that will make the current leadership look weak.

The ironic about this is that Independence Day are celebrated by the Authorities using active colonial laws to oppress citizens who doesn’t validate the ruling regime and their methods of staying in power. This happens as Lord Mayor of Kampala Erias Lukwago and Hon. Allan Ssewanyana has been arrested as well.

In Katwe, Kampala the FDC’s Ingrid Turinawe and Hon. Geoffrey Ekanya we’re arrested by the Police as they started to have their own independent Celebration in the area.

But the President himself is priding himself with the army and Police in Luuka, because it’s not like he can get a lot of people to surround himself anymore because of popularity as the fatigue of his greed and depleting state of affairs.

So the freedom that President Museveni provides is just if he is given loyalty or offers it, either because the citizen doesn’t matter or the person is not a threat to his existence of power. That proves the limited vision of liberty and justice under the current NRM regime and their force of aggravated assaults on the true independence of Uganda. Uganda should celebrate their liberation from the giant empire of United Kingdom. They might got rid of the control from London, but the control of Okello House of Entebbe or State House in Kampala isn’t that much better. They are still monitoring and controlling the civil society and impunity towards their own citizens… acting and using laws that we’re made under colonial times to silence the voices who wanted liberty back then from Whitehall.

Medals are given to these men it’s reported from the Uganda Media Centre:

The President shouldn’t congratulate, he is late and he doesn’t care of liberties and freedoms of his own, only about himself and his elite that has risen while he took power. Peace. 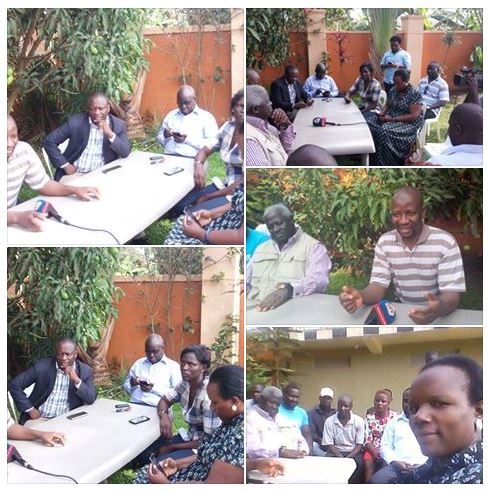 Just as the Police Force AIGP Andrew Kaweesi has been blurring and telling the Forum for Democratic Change that their not allowed to do Public rallies or anything; which by his reckoning is bound by law. The FDC is really under siege. This is happening while the pictures surface of how many Police Officers and Guards around Dr. Kizza Besigye house and his compound in Kasangati, Wakiso.

Also that the FDC Spokesperson without any warrant, any court-order or any considered method of criminal justice we’re put under house-arrest by the Uganda Police Force, at his home in Bukasa Bweyogere. This proves how malicious the rigged system is against the leading opposition and the counter-argument against the NRM and their Executive. That they have without any reason or reasonable legal motivated care for justice put Honourable Ibrahim Ssemujja Nganda.

While that was taking place the Honourable Besigye we’re fleeing his homestead and cleared away from the massive guarded areas of his compound again. Dr. Kizza Besigye has been able to pass-out before as he has done with wits. Today he went out so he could pay his respect Mr. Richard Mafabi in Buteza, Budadiri West Constituency, Sironko District. The former Magistrate of Makindye, a man who he has encountered a few times in his career. So he wanted to be noble and honour the man.

So now the Police Force is picking-up more of the Central Leadership of FDC. They cannot help themselves to do something else. They do this like in spite of the rules and regulation in the mercy of public safety, but they only does it to silence the Opposition. The legitimate party of the land and not the one that has to bribe itself into existence like the Movement does for the moment.

The FDC are under steady attack, not allowed to do its activity. Every time they try to do party works than their FDC Headquarters at Najjankumbi or some of key leadership are detained, under house-arrest or just under surveillance of the Police. The Police and Authorities are so vividly attached to upkeep of the FDC that their budget has to have giant space for the FDC and their activities. They have to pay out a lot of salary to keep up with the FDC and their work. This must be seen as wasted funds as they only further the purpose of defiance for the FDC and not strengthening the cause of the Opposition.

The Movement and their Police are just making this into a foul-play instead of what they are trying to achieve. They doing it with impunity instead of with legitimately… because when they have to take the step of house-arresting fellow MPs without any consideration and claim of illegal activity you know the government and their security outfits are totally out of bound with legitimate rule of law and justice. The Justice and Rule of Law is only serving the Elite and NRM not the people, because even the so-called representatives can be taken hostage and arrested without any court order or use of codes of law to present their case towards the person who we’re too be charged.

This is the illegal steps the government does to its own citizens and without any concern for rights. They are only caring about staying power, not serving the citizens therefore they detaining, house-arrests and personify their current impunity with the attacks on the FDC. Peace.