“The ANC has officially lost control of the the administrative capital of the country, Pretoria and the Nelson Mandela Bay Municipality. This after the EFF resolved to vote for the DA at all hung councils except where the IFP is leading. This while Ekurhuleni and Joburg remain a conundrum. However, the EFF says it’s agreement with the DA is NOT a coalition” (SABC Digital, 2016) 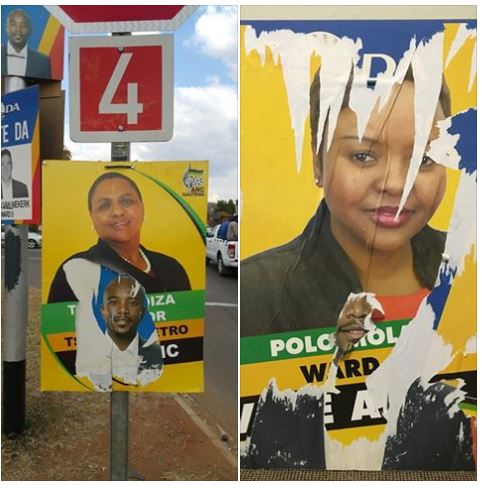 “The ANC’s theft and defacing of our posters is nothing more than a desperate attempt to slow down our momentum in Tshwane as it becomes increasingly clear we can WIN.The theft and defacing of election posters is a clear violation of sections 91, 92 and 97 of the Electoral Act and must be condemned in the strongest terms. We will be lodging a complaint with the IEC” (Democratic Alliance, 2016).

The proof of the ruling party continuation of controlling the Electoral environment by defacing opposition posters. The ANC should be so proud of their reckless behaviour towards the DA. Even if it elections and soon ballots. There should be some respect for each others craft and material. As the Citizens should pick on the merit and free choosing, not by who apparently has a President for the moment. The ANC and their comrades better act up and be within reason. Especially since they have been the ruling party for decades now and need to give way for justice and common sense. Peace.