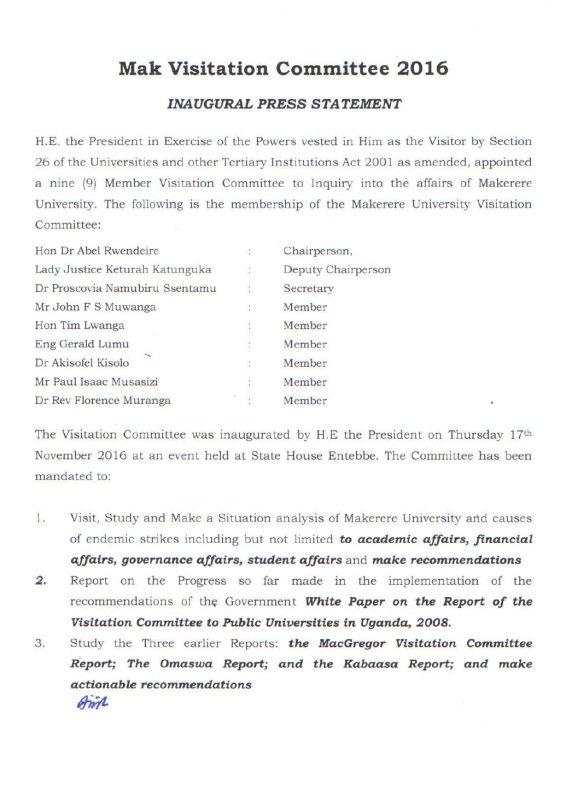 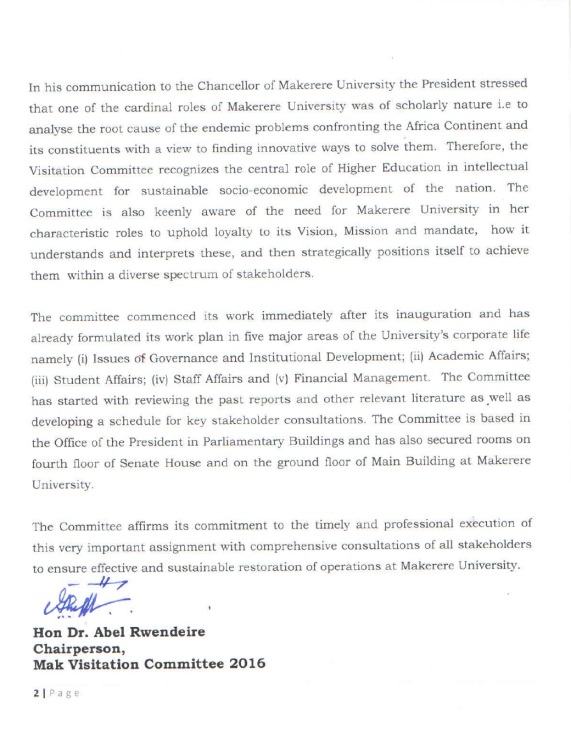 “The Speaker of Parliament Rebecca Alitwala has criticized a decision by President Yoweri Museveni to indefinitely close Makerere University without consulting other stakeholders. Kadaga is concerned that the closure has affected various other institutions utilizing the university’s services especially health centers.
Kadaga’s remarks come after the Chairperson of the Parliamentary Committee on Health Dr. Michael Bukenya informed parliament on the worrying state of Kawempe Hospital where over 15 new born babies are dying daily as a result of the medical interns leaving their posts in the wake of the University’s closure” (NTV Uganda, 2016) 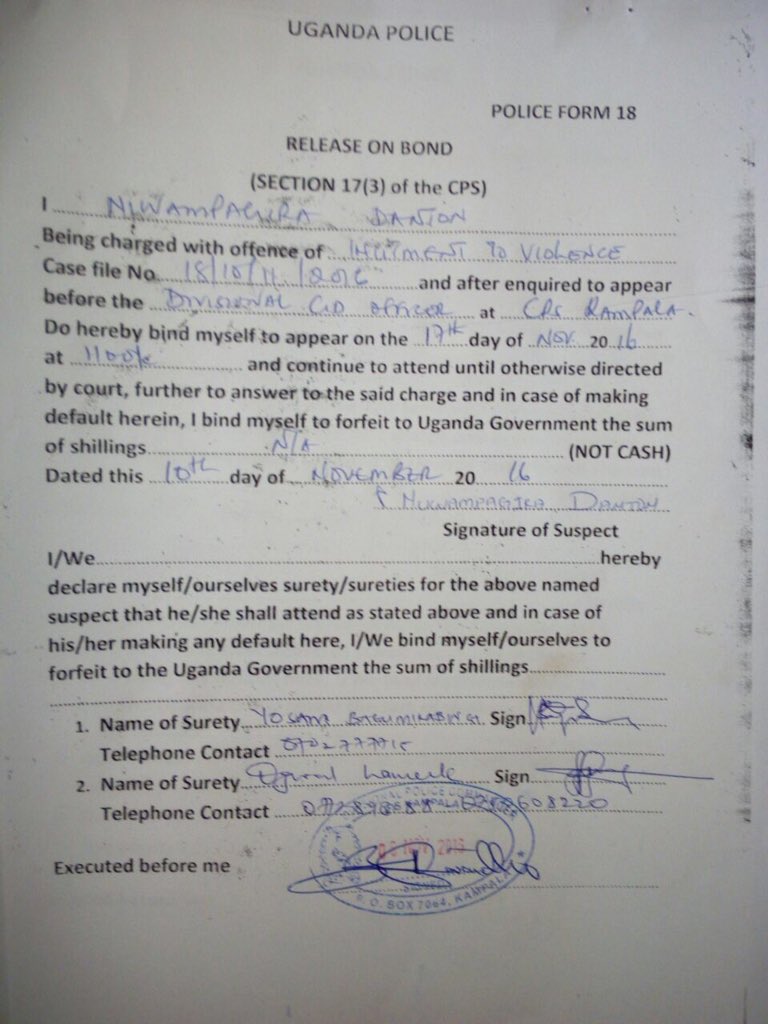 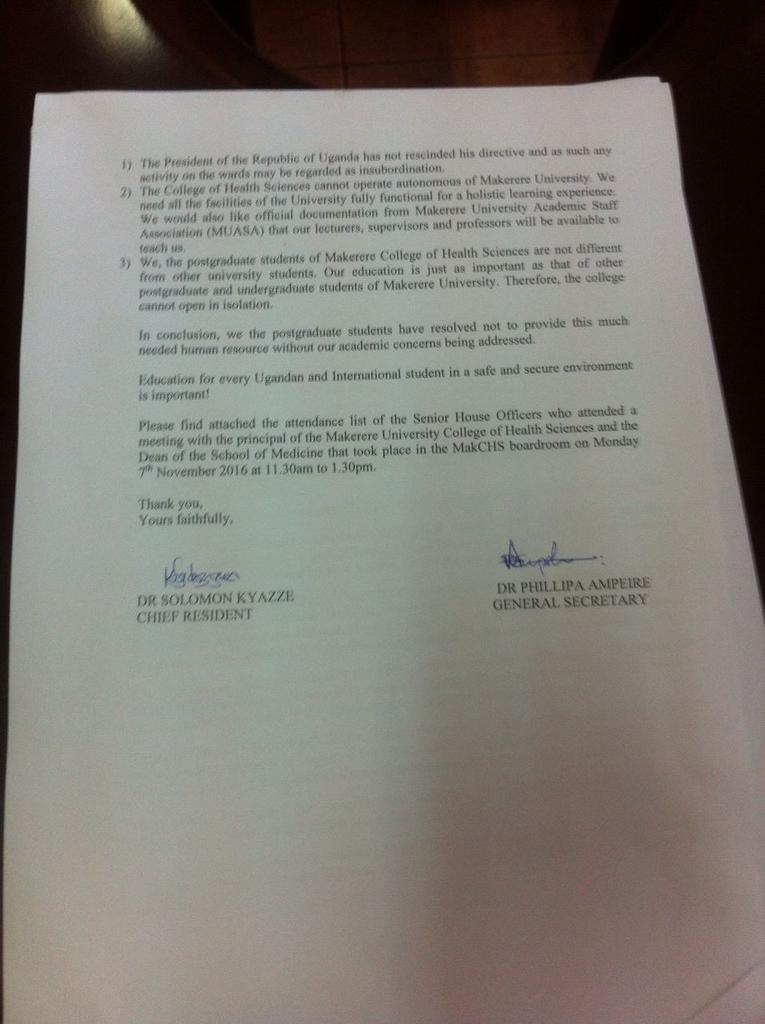 “This is Kisanja Hakuna Mchezo. We are not going to tolerate this kind of indiscipline” – Yoweri Kaguta Museveni (NBS TV Uganda, 03.11.2016)

There are a weird day when President Museveni called the teachers or lectures has been called childish by the Executive of the proud nation, President Yoweri Kaguta Museveni has now called them childish as they have not been paid or gotten their deemed salaries. Not like his fellow banker friend who has by all means been bailed out by the same President.

Makerere University is an esteemed and diamond in the nation, or it was at one point as the meagre investment and expenditure used by the NRM Regime. The insulting part is that the government has diverted the funds from the University to other projects or benefactors as the loss of funds has occurred. The same as the planned earlier in the year to adopt a policy of 100% tuition fee that we’re planned in March 2016. As the lectures and teachers have now gone for 9 months without pay, without salaries! So they are for striking for their righteous pay is now “Childish”?

Mzee, the big-man, the president who has been eating of the government plate and secret deals since 1986, calls the lectures and teachers childish. Just like he called out all the other Presidential Candidates for saying they though being President we’re easy during the Second #UGDebate2016. Who forgot that, I didn’t, he uses the same rhetoric against his own civil servants, they are at blame and not his accountability. He is more precautious have two men helping his boda stable while carrying a jerry-can in Luweero. Oh, gee I went there.

“MP Onesmus Twinamastiko (Parliament Accounts Committee (PAC)): “There is a lot of rot Makerere University. Over UGX700m was illegally transferred to private accounts. Another UGX500m is unaccounted for. PAC has summoned Makerere University officials to appear on Nov 29 to explain all this. Makerere University is not explaining where money from the printery and guest house is. Individuals will be asked to repay” (NBS TV Uganda, 2016).

Just as this has happen the hostels and living quarters has been closed as well. This happen after the President Museveni order the closure of the until further notice; this is the likes of Muhika and Bridgeton Hostels has decided also to kick-out the students. This is happening J On the 2nd November his own AIGP Andrew Kaweesi said all hostels should close. Even as the students we’re not noted on the moving matters as the strikes for pay for their lectures and teachers we’re not happening anytime soon. This was the day after the IGP Kale Kayihura on the 1st November went all in and made the University look like a War-Zone.  So the Police has practically take-over of the Security Organization, while they decided to kick-out students.

So on the 3rd November President Museveni had to call them “Childish” for asking for something that is theirs. Certainly they have worked and honoured through their contracts; they are bystanders’ for the conflict of maladministration and mismanagement from the Central Leadership of the University. That is why the allocated funds have gone away into accounts that aren’t the lectures and teachers, as they we’re supposed to.

In this taunting game, the Makerere Lectures aren’t childish, but the President is, since he cannot within reason fix the ones that has either done a fraud, racket or embezzled the funds away from the Educational Institution.

Vice Chancellor Ddumba Ssentamu says “the institution doesn’t have money partly because students pay little as tuition fees“ (NBS TV Uganda, 26.10.2016). Well, if a 100% rise in a year that we’re scrapped and claiming the students are to blame for not willing to be robbed for getting a degree. Than they can be childish for that matter of paying a decent price for their intuition fees; the issues the VC should have is the funds that went into private accounts instead of paying of the staff and people working to make the Makerere what it is.

The issue of the childish or indiscipline of Makerere comes from the top, it’s the structure he has made in his image. This is the proof of his system of constant greed and constant eating on other people work without putting effort in and hoping donors or willing investors will fix it all. That is the same way Makerere is run together with the same corrupt acts as the State House. But if the discipline is coming back with water-canons and tear-gas from the Yoda of Uganda Kayihura, than President Museveni is wrong. He has already let the facility not caring for their staff for 9 months. Not cared and not payed, not show interest in the ones actually educating the future Uganda. This proves how badly wrong the Government is run. Not only is Mulago as a hospital failure as proven over the recent months and now the second has grand issues Makerere.

The one that is the grand indiscipline walking ATM who sometimes eats of others plate, is the President Museveni who has only the Police as his friends to clear the fire. Not like he is real diplomate, he is now used to paying off men and woman as he does in the Parliament to get legislature through the Preliminary Sessions. Now, he has to fix the lacking payment of the Makerere…

It is not indiscipline or childish to react to lacking pay, it is childish to complain to the men and woman who has worked and not gotten their deserved ends. The ends never came as they we’re diverted instead of being allocated correctly. So it is time for President Museveni to go-off his boda and lead brigades with honour and bravery, actually talk and not just fire tear-gas. Firing tear-gas at innocent civilians is easy, it’s harder to negotiate with people who have already been bushwhacked; he has already stifled them and let the institution staff in the wind.

If Museveni we’re serious he wouldn’t close it, but find some of the same “Save-the-friends” of the Junta fund that he used to the bailout of Crane and all the other companies that Gen. Salim Selah is connected too. We can all wonder why he doesn’t want to give and honour the pay of his civil servants at Makerere. That shows that he is a coward who cannot talk and has to braze the gun. Peace.

The Directive from the President of the Republic of Uganda to Close our University is greatly damaging, harmful and unbearable. The President in exercise of his powers may have not been accorded the required advise on what the consequences of his action could be. Makerere University needs to be Open

It should be noted that whenever the University Management, MUASA and Government fail to harmonize their position, it’s the Students and our Parents that suffer. We also note that these continued interruptions have now got a ripple effect towards the reputation of Makerere University globally.

As the Students Guild, we are saddened by this decision and have not agreed to it. The Directive has come with a very unbearable cost to the University, Students, our Parents and Guardians, Development Partners, Researchers and Africa as a Continent.

Pursuant to the provisions of the Constitution of the Republic of Uganda Article 30 which guarantees our right to Education, We have petitioned the Minister of Education and Sports demanding immediate opening of the University to avoid gross damages to our students.

We are also seeking remedies for the damage caused to all students. Therefore we are preparing to sue all stakeholders and have them compelled to compensate Students for the damage they have suffered.