Journalists who were travelling to cover FDC campaign in Moroto today we’re stopped by the Police in on the road along from Kitora to Moroto. The District Police Commander of Moroto George Obia is the one who commissioned the stop of them. Then this unfollowed!

The Police stopped the journalist from the NTV Ronald Galiwango, the New Vision photographer Kenedy Oriyem and Kyaaze Anyast of Bukkede TV. Their cameras we’re either destroyed or confiscated by the police at the road.

The Journalist has later been in discussion with the Regional District Commander Aruk Maruk. Since they should get an explanation for the matter and settle it. This here is a violation of freedom of the press and their movement to cover the national matter. In this sense the campaign coverage of FDC, the same Police Commanders would not do the same if there was a NRM campaign convoy in the area. Then they would have stand on guard and grinned because the Mzee would be around! Peace.

Today there been FDC-Supporters who have been in car-accidents. But that is not the worst. It is sad to see all the car accidents that are happening in Uganda, because of the poor roads and security on it.

In Arua districts and sub-counties one of the two days they are on the campaign trail there. The Police have been involved and taken charge in the area. Just as they have done with the Go-Forward Presidential Candidate Amama Mbabazi in recent days.

Even NTV Senior Journalist Francis Jingo and Ronald Galiwango we’re manhandled by the Police and because he and for the reason of wanting to visit the local referral hospital, but was not allowed therefore the hard treatment from the local police force.

The DPC Jonathan Musinguzi made a decision and denied the FDC Campaign trail to visit the Rhino Camp Health Care. This is the place where the Besigye Convoy we’re attacked. Even the FDC MP Flag-Bearer for Madi North with registered number UAX 381L we’re injured in the battalion. It was the DPC and the Police blocked the entrance for everybody! 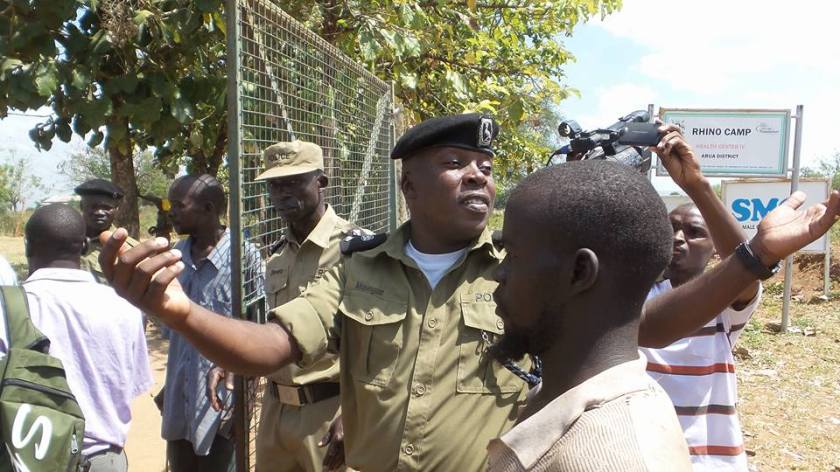 “A lot of interferences by Police couldn’t stop the people of Madi and Terego from taking part in our campaigns today. Thanks to the FDC leadership and people for the good work at all our 7 rallies. Tomorrow we continue with other parts of Arua and our main rally. Wesige Besigye”.

That’s enough of the madness from the Police on the matters of FDC today! Peace!