After reading a Forbes article on Illicit Financial Funds leaving Ethiopia, as they question the need for and the use of donor aid to Ethiopia. I had to read the reports that it partly was based and make my own assumptions. The difference is that I want to focus on the East African Nations and their Illicit Financial Funds that leaves the States. So that the values and the amounts show’s lack of governance and regulation of finance gives way for the African governments and corporations to get away with transferring funds without legal bounds. This is a way of misusing funds and also money laundering through lacking revenue service and authorities to keep up the upkeep of the states. Take a look!

“IFFs are illegal movements of money or capital from one country to another. GFI classifies such flows as illicit if the funds crossing borders are illegally earned, transferred, and/or utilized. If the flow breaks a law at any point, it is illicit” (GFI, 2015).

“African governments have a political interest in IFFs because these flows impact their national development aspirations and encroach on state structures. They therefore have law enforcement and regulatory agencies whose duties include preventing IFFs. Among these are the police, financial intelligence units and anti-corruption agencies. Governments also have customs and revenue services and other agencies whose purposes are thwarted or hindered by IFFs” (IFF, P: 35, 2016).

“The widespread occurrence of IFFs in Africa also points to a governance problem in the sense of weak institutions and inadequate regulatory environments. IFFs accordingly contribute to undermining state capacity. To achieve their purposes, the people and corporations behind IFFs often compromise state officials and institutions. Left unchecked, these activities lead to entrenched impunity and the institutionalization of corruption” (IFF, P: 51, 2016)

“Most African countries do not have enough highly trained lawyers, accountants and tax experts to carry out the oversight functions to prevent or punish perpetrators of illicit financial outflows. The few that exist are often overworked and unable to prepare sufficiently to take on top-class representing large corporations” (IFF, P: 72, 2016).

*(in millions of U.S. dollars, nominal)

*(in millions of U.S. dollars, nominal)

If you look at the charts there are some monies that is missing and gone away on all sorts of schemes and tax exemptions, all sort of added invoicing or other types of financial instruments to make sure the monies doesn’t end where they are supposed to be. The East African states have misused giant amount of funds.

Ethiopia, Sudan and Uganda are topping the list. What is weird for me and the report it is not specifying the Sudan as the Khartoum republic or putting South Sudan alone! So the report and the values put on South Sudan, which was independent in 2011, there do not know what of part of Sudan who has illicit funds. Still, the values and the amount of million dollars Illicit Financial Funds (IFFs) from Ethiopia for instance. You can wonder how much of the government budget that is eaten by this sort of financial mismanagement and misuse of public funds. The reserves and state coffers have to be hit when it is these amounts of dollars that are lost. Uganda have also gotten rid of giant amount of funds, these is 10 higher than the revelation during the Oil Probe with the 2.4 Trillion shillings, which is about $640-700m dollars. That we’re oil revenue that has not been remitted to the state, just these values is ten-times of what was revealed in the Ugandan courts. So there is other revenue that the State House, Bank of Uganda and Uganda Revenue Authority not have complied to or have registered as there is a loss of $7,149 million dollars.

These is just two financial instruments as the HMN and the GER that is explained under the table, the other ways of misusing funds, I haven’t even covered. This is just how much that is miss-invoicing and Hot Money Narrow, the others can be shown at another time. The numbers shown here alone show the extent of misuse of funds in a decade. That is the public loss and the state coffers that been looted by the regime and their lack of will of following and regulating the financial markets. Therefore, the state and institutions does not have the will or capacity to follow the money. This shouldn’t be evident, but it is and not a good look. Peace.

This here is prove the numbers, this here does not prove who have the major accounts; on the surface as he page shows numbers, but not the accounts or who’s name that is behind the coded accounts from the HSBC Swiss Bank leak. This here proves that standards and values of how much money that leaves the countries and get into secret accounts in Switzerland.

This proves the values and the estimated amount of money in the accounts. In this here that I found on the page is very little direct as I don’t have somebody on the insides, that gives the documents. Therefore here is the raw-numbers and estimated that have been sent from East Africa. In this article I just have some persons who are connected, but not many of the holders of the accounts from the leak.

“30 client accounts opened between 1988 and 2006 and linked to 32 bank accounts. 14 clients are associated with Burundi. 21% have a Burundian passport or nationality. The total estimated values in the accounts are $30.2M.   The maximum amount of money associated with a client connected to Burundi was $8.3M” (ICIJ.com, 2016).

“Listed as living in Belgium, Kulsum was linked to three HSBC numbered client accounts opened between 1990 and 1997. One account –15208BAMA– linked to two bank accounts that together held as much as $3.26 million in 2006/2007, was later blocked for unspecified compliance reasons. She showed up as a joint account holder of that numbered client account. The other two accounts were closed in 1995 and 2000” (ICIJ.com, 2016).

“182 clients are associated with DR Congo. 2% have a Congolese (Kinshasa) passport or nationality. 245 client accounts opened between 1984 and 2006 and linked to 299 bank accounts. The total estimated values in the accounts are $179.8M. The maximum amount of money associated with a client connected to DR Congo was $60.3M” (ICIJ.com, 2016). 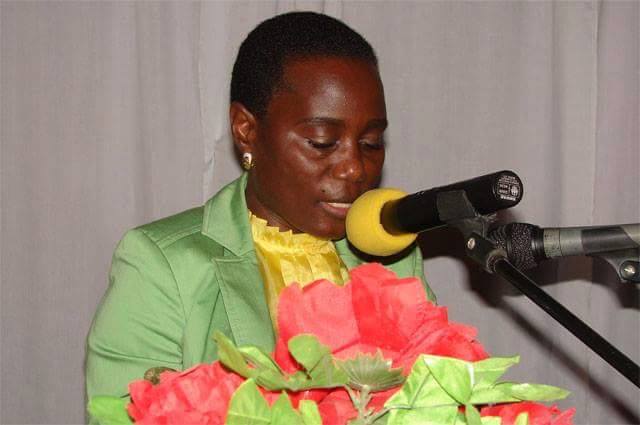 “Jaynet Désirée Kabila Kyungu is the twin sister of Joseph Kabila, the president of the Democratic Republic of the Congo. Famed for secrecy and meticulousness, she was elected to parliament in November 2011 and took office in February 2012. Kabila is the president of the Laurent Desire Kabila Foundation, named after her father, and owner of Digital Congo, a television, Internet and radio conglomerate. In 2015, Jeune Afrique reported that Kabila had become “the most influential person in the president’s entourage.” (…)”Keratsu Holding Limited was incorporated in Niue on June 19, 2001, a few months after Kabila’s brother became president of the Democratic Republic of the Congo. Jaynet Désirée Kabila Kyungu appeared as co-director with Congolese businessman Kalume Nyembwe Feruzi. The DRC Company Keratsu Holding Ltd has owned stakes in one of the DRC’s major mobile phone operators” (Eagle.co.ug, 2016).

“29 clients are associated with Ethiopia. 24% have a Ethiopian passport or nationality. 31 client accounts opened between 1986 and 2004 and linked to 55 bank accounts. The total estimated values in the accounts are $10M. The maximum amount of money associated with a client connected to Ethiopia was $2M” (ICIJ.com, 2016).

“32 clients are associated with Eritrea. 28% have a Eritrean passport or nationality. 24 client accounts opened between 1981 and 2006 and linked to 39 bank accounts. The total estimated values in the accounts are $699.6M. The maximum amount of money associated with a client connected to Eritrea was $695.2M” (ICIJ.com, 2016). 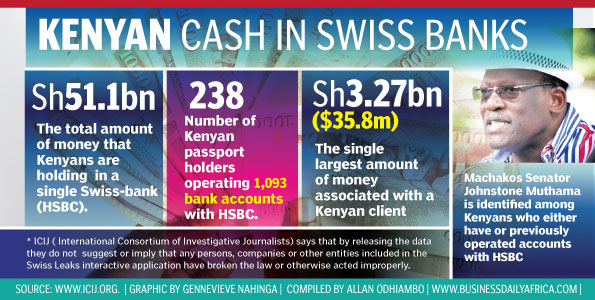 “The county or people of Kenyan nationality have 1,093 bank accounts, which with 463 client accounts opened between 1975 and 2006 and linked to 1,093 bank accounts. 742 clients are associated with Kenya. 32% have a Kenyan passport or nationality. The total estimated values in the accounts are $559.8M. The maximum amount of money associated with a client connected to Kenya was $35.8M” (ICIJ.com, 2016).

“HSBC files recorded Muthama’s name in connection with the client account “ROCKLAND96”, which was set up in 1996 and closed in 2000. Muthama was also linked to the numbered client account “20443NM” over the same period. Bank files listed eight of his relatives – named Nduya Muthama – also linked to the numbered account. The leaked files do not specify the exact role that he had in relation to the accounts” (ICIJ.com, 2016).

“She and her husband were listed as directors at Forrell Real Estate Inc from 2001 to 2007 and Rocklane Properties Ltd from 2001 to 2003, which were notably active after her appointment to the Judiciary in 2000. She was also a director and shareholder at Ubique Services Ltd in 1994 and shareholder at Highworth Management Services in 1995. All four firms were registered in the British Virgin Islands (BVI), a notorious tax haven” (…)”The Kenyan Constitution makes it illegal for judges, being state officers, to open and operate offshore bank accounts. Chapter Six, Article 76 (2) (a) states: “A State officer shall not maintain a bank account outside Kenya except in accordance with an Act of Parliament” (Kubania, 2016).

“”Emmanuel Ndahiro became a director of British Virgin Islands company Debden Investments Limited in September 1998, the same year in which Ndahiro regularly appeared in international news as a spokesman of the Rwandan army. Debden reportedly owned a jet aircraft. At the time of his appointment, Ndahiro’s listed address was a building in a commercial section of a West London neighborhood. Hatari Sekoko, a former soldier with the Rwandan Patriotic Front and now a major business executive, was the company’s owner. The company was deactivated in 2010.” (ICIJ.com, 2016)

“7 clients are associated with Somalia. 29% have a Somali passport or nationality. 10 client accounts opened between 1990 and 2003 and linked to 22 bank accounts. The total estimated values in the accounts are $15.5M. The maximum amount of money associated with a client connected to Somalia was $12.2M” (ICIJ.com, 2016).

“99 clients are associated with Tanzania. 20% have a Tanzanian passport or nationality. 91 client accounts opened between 1982 and 2006 and linked to 286 bank accounts. The total estimated values in the accounts are $114M. The maximum amount of money associated with a client connected to Tanzania was $20.8M” (ICIJ.com, 2016).

“83 client accounts opened between 1972 and 2006 and linked to 212 bank accounts. There is now as the leak where happening 57 clients with Ugandan Passports or Nationality.  The total estimate to be in value in the accounts is $89,3M.  The maximum amount of money associated with a client connected to Uganda was $8.8M” (ICIJ.com, 2016).

The numbers speak for themselves and the amount of money is staggering, this is most likely through one of giant Swiss Banks of the HSBC where the money have gone through and filtered in secret accounts. This here proves the levels of accountability and how the rich and elites filters away money from the country where they are earning money to have less tax or not being taxed in the under the regime some of them works for or is close by.

There lacking of accountability and senseless stealing of funds in between the different countries, as the scandals are rocking often. As state house and other governmental institutions missing funds before the fiscal years over, or lacking the economy to pay the salaries to their civil servants. Secondly is the free-based economy that gives edges and corporate greed who can strive without beneficial taxation and gives way for the movement of funds from the country the business is in; into a country that are a Tax-Paradise where the ones with the account can be secret and not pay what they are expected. If not it can be away of embezzling the funds or white-wash the funds as shell-companies are holders for the monies, while the owners tries to find a great use for the funds. Peace.