Archive for the tag “Richard Kintu” 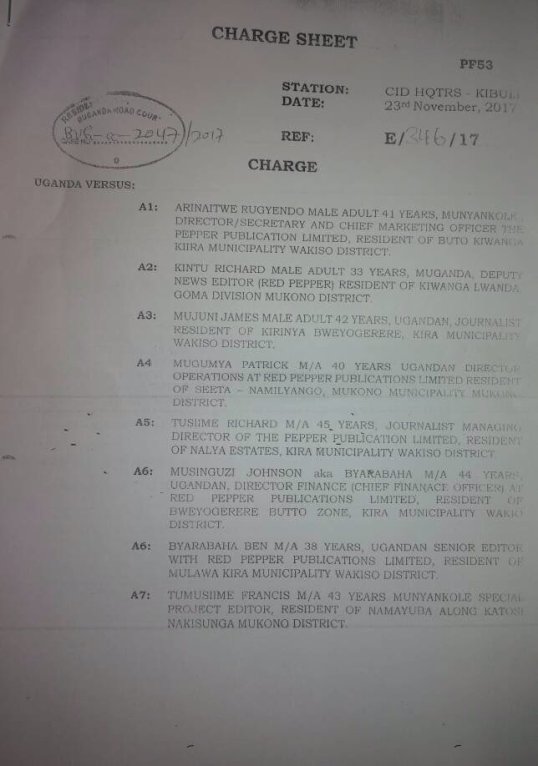 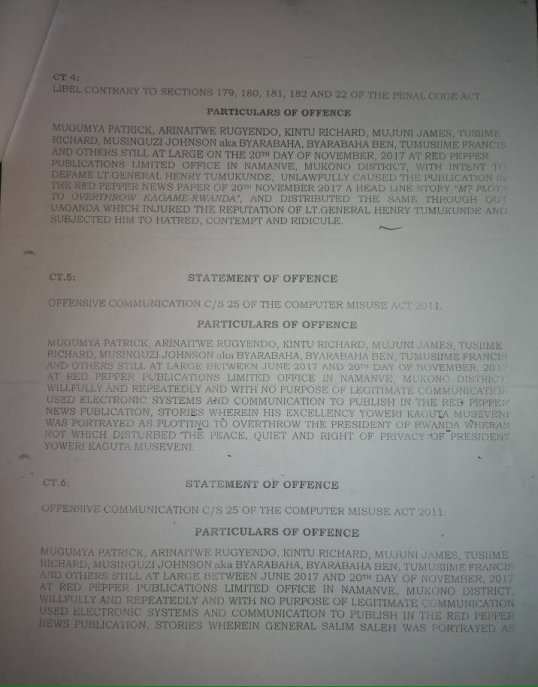 Opinion: Police besieging the Red Pepper and charging editors with ‘Treason’ after the published article, says there are more to the story, than Ugandan Government want the public to know!

The story that was published on the 20th November in Red Pepper named: “M7 Plotting To Overthrow Kagame – Rwanda”. Has clearly sparked some tensions within the National Resistance Movement and the Uganda Police Force. Since since 21st November the besieged paper, have been searched with warrants and the editors been charged today on the 23rd November with treason. This is like the Gen. Sejusa stories in May 2013 all over again. As the NRM are trying to deflect and says the stories are not true and is baseless. Still, they are assaulting and silencing the media who reported the story. It doesn’t make sense. If it is a baseless allegations and without merit. Wouldn’t it be better to not care or just file a complaint in court? Wouldn’t it be better to file a case and show that they have to retract the story after the allegations are falsified?

Instead, with the use of Anti-Terrorist Police and use of force within the headquarters after the story was published. You are allowed to question if the NRM are afraid of their secret operations and training camps of specialized militia. They have done similar with training camps in Kisoro for operations within Kivu provinces in Democratic Republic of Congo. So another story like this could be true. Therefore, with the recent reactions, it is harder not to be believe that Museveni wanted another foreign scalp. He has done that also in past, so he has the capacity and brazen armed tactics to fence of neighbors to get puppets there as well. Therefore, the story might be true, as the partisan police force are now attacking the Red Pepper.

Here is some reports on the latest news concerning the paper!

“The Ministry of Foreign Affairs has learned, with dismay, of the Red Pepper cover story carried on Monday November 20, 2017 with the headline “M7 plotting to overthrow Kagame – Rwanda” in which the Red Pepper reproduces a malicious article by a Rwandan online publication “Rushyashya” of an alleged plan by the Ugandan Government to overthrow the Rwanda Government. The Ministry dismisses, with contempt, allegations carried by any media publications or platforms to the effect that relations between Rwanda and Uganda are anything but strong and cordial. The Ministry informs the citizens of both Uganda and Rwanda that the continuous innuendo by the likes of “Rushyashya” and various other media outlets both in Uganda and Rwanda, including the Red Pepper is mischievous at best, irresponsible at worst and meant to sow discord between our two sister nations. The Ministry condemns such abuse of the communication platforms they are privileged to manage” (Amb. Patrick S. Mugoya – ‘UGANDA-RWANDA TIES SOLID’ 20.11.2017).

“Uganda: Committee to Protect Journalists concerned by reports that 8 senior managers and editors of RED Pepper UG were arrested yesterday over report. The directors and editors of Pepper Publications Group who were picked from their offices on Tuesday by police, are detained at Nalufenya Police Detention Centre in Jinja, according to Daily Monitor. The Tuesday operation was led by Kampala Metropolitan Commander, Mr Frank Mwesigwa. According to the company’s lawyer, Mr Dickens Byamukama, all the five directors and top editors were driven to Nalufenya at around mid-night. “All the directors plus three editors were taken to Nalufenya at around mindnight after being detained at our office for close to 8 hours. The police say they are going to drive them back to Kampala today [Wednesday], so we are still waiting on them,” Mr Byamukama said. The five directors are; Richard Tusiime (CEO), Patrick Mugumya (CPO), Arinaitwe Rugyendo (CM0), James Mujuni (CCO) and Johnson Musinguzi Byarabaha (CFO). The editors are; Ben Byarabaha (Managing Editor), Richard Kintu (News Editor) and Tumusiime Francis Tinywana (Bwino Newspaper Editor who doubles as General Manager)” (CPJ Africa – Committee to Protect Journalists, 22.11.2017).

“Namanve based Red Pepper Publications has been ordered closed after an earlier siege by security personnel this afternoon. A source inside Red Pepper tells Nile Post that after rummaging the offices, the media house has been ordered to shut. “We have been ordered to close, all workers also ordered to stop working,” the source intimates. The source also adds that all computers have been taken, while workers have been asked to surrender their phones and electronic gadgets. Immediately after surrendering items, staff at red pepper have been ordered to vacate the premises with immediate effect. Red Pepper publication on November 20 published an article with headline; “M7 plotting to overthrow Kagame – Rwanda” which was reproduced from a Rwandan online publication “Rushyashya” of an alleged plan by the Ugandan Government to overthrow the Rwanda Government. However, the government in a statement by Ministry of Affairs Permanent Secretary, Patrick Mugoya, has rubbished the claims, citing that the two countries are currently enjoying strong and cordial relations” (Information Uganda, 21.11.2017).

So now the ones publishing a non-story is detained at Nalufenya and also charged with treason. They have taken all ICT and telecommunications at the headquarters. The Police and the Ministers has tried to deflect the story and saying there is nothing between Rwanda and Uganda. They have a cordial relationship as republics. But henceforth that is hard to believe, when editors and publishers of the Red Pepper is slapped with charges of treason.

They have clearly written something within the story of Museveni plotting to overthrow Kagame on the 20th November 2017. If there was nothing, would they have gone this far against the press and against the ones who wrote it? If there is nothing, why are they trying at the same time to deflect it to the media?

The signals they are sending and the assault on Red Pepper seems like panic-mode for a released story and dossier that hurts the relationship between Kagame and Museveni. As it shows again, that Museveni wants a puppet in Rwanda. That would not be surprising, as Museveni helped Rwanda Patriotic Front/Army in 1994, as the Rwandans helped him to power in 1986. The relationship between Kagame and Museveni have gone up and down over the years. But this would be a final blow between them. If not, Kagame maybe just don’t care about Museveni and his offerings.

Whatever, this is, it is clearly that it got the alert and the NRM working overtime. Since they cannot stomach the stories and the possible altercations created by it. They cannot manage to do it without reasons if it is a non-story. Like file a petition to court and get a verdict, then get damages and question the editors and journalists integrity. Instead, they are verifying the story, by detaining and putting charges of treason on their heads.

The toppling story of Kagame becomes more real, because of their actions. It seems less of conspiracy and more of a reality. Since the state has to do this to the publication and their workers. It makes it more likely, as their actions speaks louder than words. If it wasn’t anything to care about or fear. Why start with blazing guns and besiege the Red Pepper Headquarters?

The answer is within the state and within the security operation who has done this. It is within the leadership of the NRM and the Security Officials who are mentioned. They have the answers and could open up for possible reasoning. They cannot speak with double tongues. In one perspective: “it’s nothing, don’t look” and secondly: “it’s treasonous and criminal, don’t look!”. It is either a crime, because the state planned something criminal and trying to change the leadership in Rwanda. Or it is fiction, which could be challenged in the courts. Instead, the first is more likely, than the latter. That is because of the activity and the blatant acts of oppression against the Red Pepper. The NRM cannot hide from that, President Museveni can neither.

Kagame is the only one that should be smiling, since his counterparts has to clean-up his shop and show his real stamina. While keeping cool. That is why we haven’t heard anything from Rwanda on this matter. They are cool and smug about it. They should be too, since the NRM and Museveni is the ones losing face. Peace.