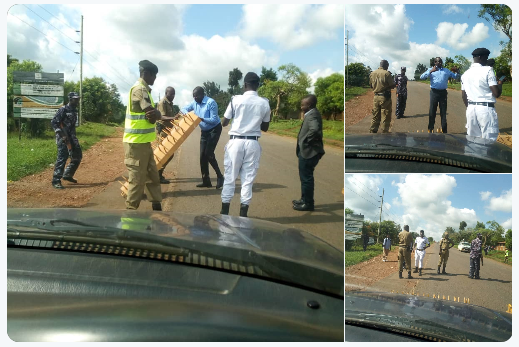 I just have to ask after the Forum for Democratic Change (FDC) Party President was scheduled to meet with party leadership for an internal meeting with the party leaders of Kasese today. However, he was blocked from entering today and was ordered to travel back to Kampala. The Police arrested him on the spot after blocking the road. Also because of lack of gas, they dropped him off in Fort Portal and further released him.

This is in the same month, the same Party President haven’t been allowed to accessing Kumi, Bukedea and Soroti. Therefore, he will struggle to meet and greet, but also access the party, as is his duty as the Party President.

If the police in these instances are using the Public Order Management Act of 2010 as reference, the law states that the internal gathering to discuss party organization and internal affairs, does not mean it is a public meeting and therefore, does not constitute the use of the law in question. This is in the explanation part of law.

What was happening today and earlier in the month, have been internal party gatherings and functions of the party, to discuss the way forward and how to organize their efforts. This has not been public meeting or rallies. Today was a meeting with local party leadership where the President of Party could also reside to follow.

Clearly, this is problem to the state, since they are now blocking the Party President to do his functions and follow his party. This is part of the paradigm, as the NRM are allowed to everything without any consequences, but the FDC have to be burned. This is yet another prime example of this. Where now Patrick Oboi Amuriat is now paying the price and cannot do his elected job.

What is weirder in this manner, did the police ever do this to Rtd. Gen. Mugisha Muntu? Did they stop him from doing his job and such? They stopped a few rallies in the Ankoli in the running up to the General Election, but at that point, the Police is stopping everything associated with Besigye. However, I cannot remember the Police crashing Muntu’s internal party work or even arresting at the FDC Headquarters, where others was taken away, but not him.

That was a side-note, but shows the difference of leadership and what it cost. It costs for POA to be who is and what he represents. Clearly he is striking a nerve and paying the price. As they are not allowing him to meet his own party leaders in the districts of Kasese, Bukedea, Kumi and Soroti. Who knows, which else districts they will block him from accessing?

Secondly, what is illegal with what POA is doing? To what extent and what rights has the security forces right to do this to him?

Certainly, with the knowledge of this police force and this leadership. This is not the last. Not the final straw. This saga will continue. Peace. 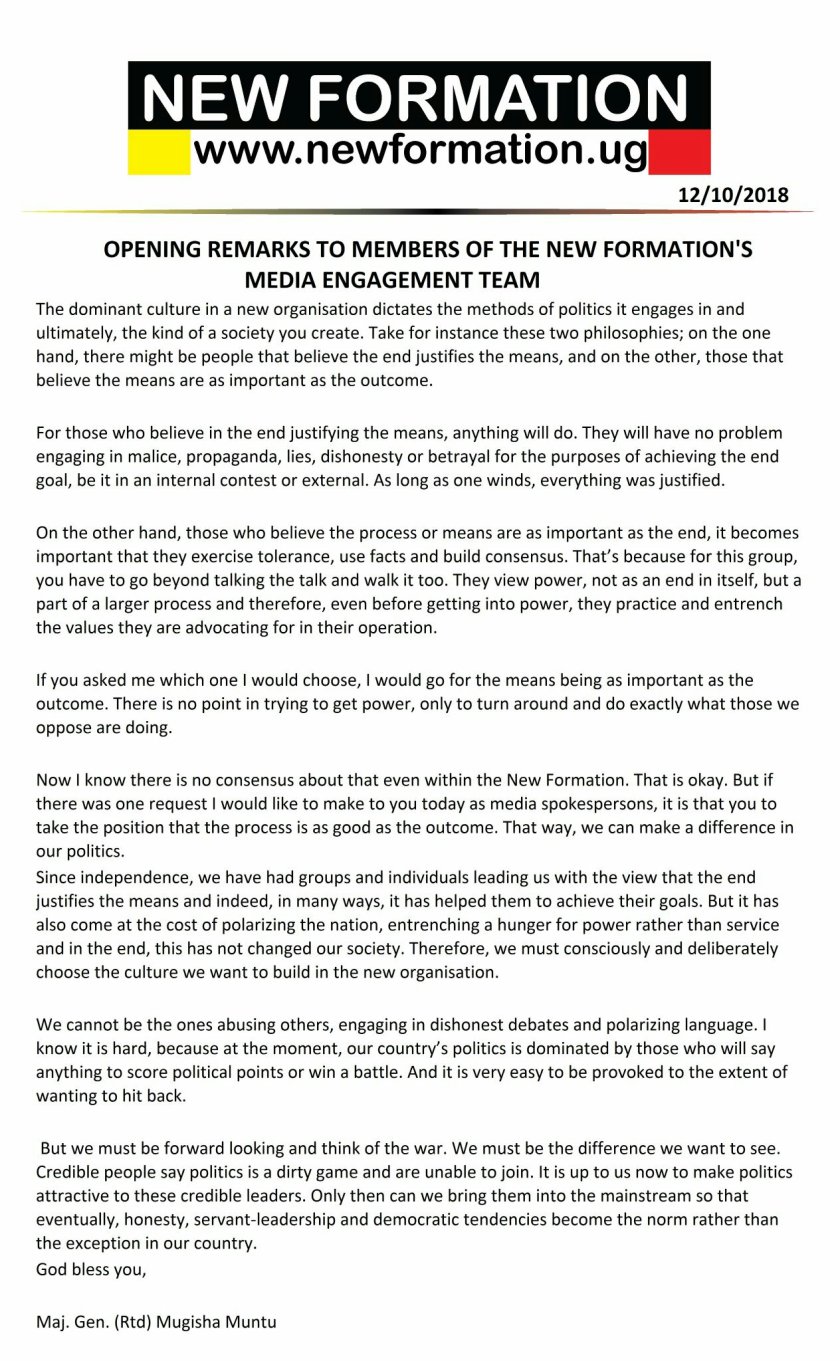 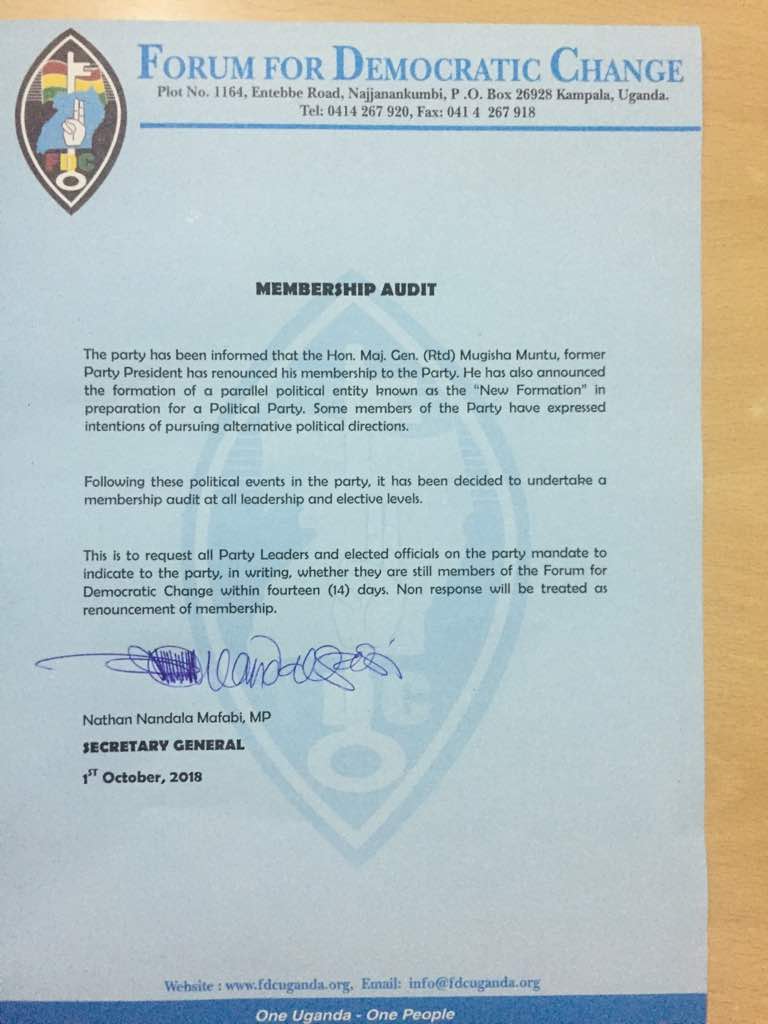 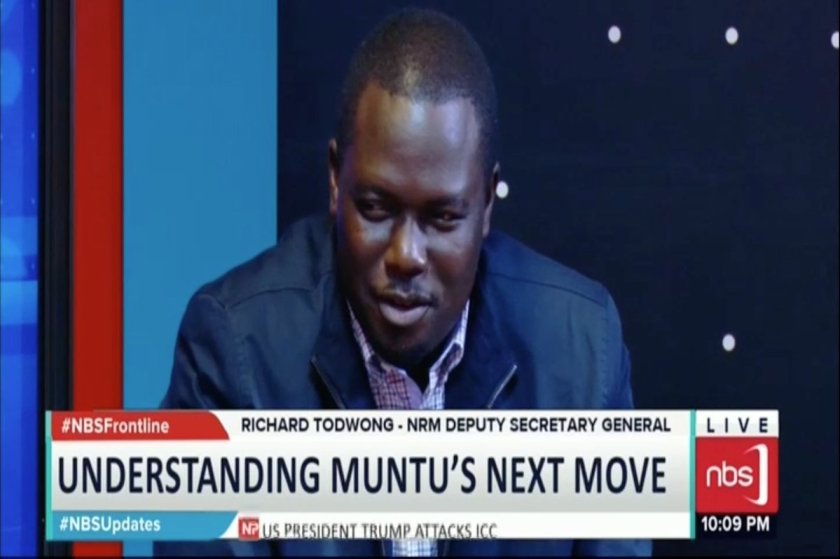 “For us at NRM, we knew this was an accident about to happen, there was a lot of confusion in that home and what happened was the climax of what was happening over time. It portrays FDC as a party that can’t handle internal contradictions, it portrays a party with members who have an ego bigger than the party. We’ve seen this in all political parties like DP and UPC, when a party is formed out of one specific agenda like remove an individual from power, these are the outcomes. To us as NRM, we really say they weren’t ready enough to have a political party” – Richard Todwong at NBS Frontline, 27.09.2018.

Let’s put things in perspective, the National Resistance Movement wouldn’t be like they are, if they didn’t have power or didn’t have the army. They need both to exist, as well, as they are following the guidelines and all principals of President Yoweri Kaguta Museveni. The only man with a vision and leadership capacity within the party. That is why no-one has been able to succeed him since the 1980 election and the following Bush-War and the 32 years of ruling since.

It is like the NRM honcho Richard Todwong forgets that, as the biggest EGO of the land is Museveni. Not Kizza Besigye, Not Mugisha Muntu or even James Akena. But the biggest is Bosco.

NRM are not even ready to have another President, another ruler of the NRM and the Republic. Because no one is supposed to question the almighty Bosco.

In FDC where this problems all steams from, is because their delegates picked their third Party President since its inception. Something, that is still not happening in the NRM. They cannot even think of running against Bosco in the next presidential either. He is the sole-candidate for life.

Let’s be honest. If their been succession in the NRM, there wouldn’t have been no Reform Agenda or Forum for Democratic Change, because internally, the leadership would have rotated so that Besigye and Amama Mbabazi could eventually lead it. There would still be a DP and UPC. However, they we’re there before NRM and before UPM, the party before the now ruling party.

When the NRM says the FDC aren’t ready to be a political party, why are the NRM only able to change leadership, when they starting to get ambition for the throne and not before? Why are you taking out the Gilbert Bukenya and Mbabazi, when they want to get more? Not because of political differences or even mere policies, but for their naked ambition.

So, maybe the NRM isn’t ready for being a political party and only being the armed wing of the juggernaut called Bosco. Aye? Peace. 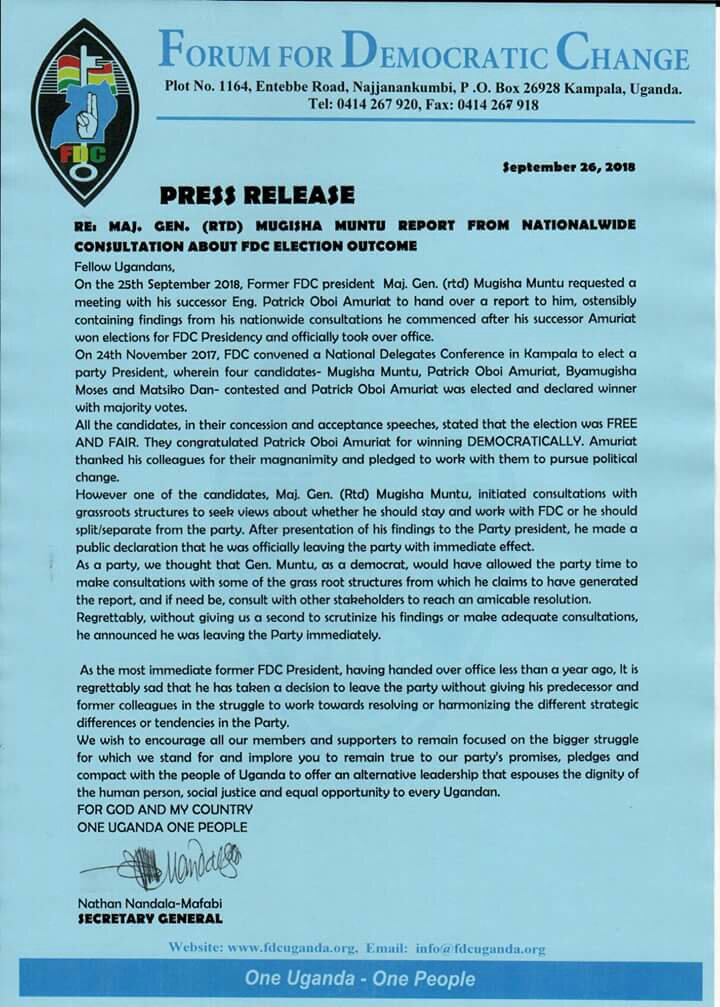