We know that President Donald J. Trump has taken nearly one-third of the term into vacations, weekend trips to Florida and other days outside the White House. When the President travels, this is costly and extra hours for the Secret Service. The Secret Service is obligated to be the security guards and have convoys securing the President and his family. With the Trump presidency, it has also been extra lounges at the Trump Tower, as the First Lady stayed there for months before leaving for D.C. Therefore, the expenses has grown with the extra traveling days, but also the rallies and all other activity the President has been up-to. Just take a look!

“Secret Service Director Randolph “Tex” Alles, in an interview with USA TODAY, said more than 1,000 agents have already hit the federally mandated caps for salary and overtime allowances that were meant to last the entire year” (…) “ Alles said the service is grappling with an unprecedented number of White House protectees. Under Trump, 42 people have protection, a number that includes 18 members of his family. That’s up from 31 during the Obama administration. Overwork and constant travel have also been driving a recent exodus from the Secret Service ranks, yet without congressional intervention to provide additional funding, Alles will not even be able to pay agents for the work they have already done. The compensation crunch is so serious that the director has begun discussions with key lawmakers to raise the combined salary and overtime cap for agents, from $160,000 per year to $187,000 for at least the duration of Trump’s first term” (Johnson, 2017).

So the Secret Service already are overworked as they have taken hours and trips with the President. That a 1000 agents already are over the mandated caps for salary and overtime. Shows how much the President are traveling and extra work that the agents has gotten by the actions of the President and his family. That the numbers has gone up from Obama, is also typical, since the family of the Trump needs security in New York and nepotism is rampant in the White House. This sends worrying signals of how little the Trump Administration and New York Gang cares about the budget, as long as they are living their lives.

That this arrogance and double moral is clear in this, as he claimed Obama traveled to much and was such a burden on the budgets as a President. It only tool 7 months before he cracked the budgets of the Secret Service, this from a government that plans to deplete many government subsidized programs to the poor, while expanding the army. The US government under Trump isn’t fiscal responsible or caring about the outcome. Since he in just such short time has spent enormous amounts of funds taking vacations and playing golf on his own estates. That has also added extra expenses to the Police Force and States, which he has visited. It isn’t only the Secret Service who has had to spend fortunes on Trump, but the state of Florida and New Jersey has had to get added funding for their ordinary work.

This proves the mockery of it all, as such a rich man likes this is living lavish on the state and also using the security operations in a way that it even breaking the bank and accounts for the Secret Service. The Secret Service are in August, but has not funds to pay for the extra services needed for the President until December. That is 4 months left of the year and already overspent. This is something the White House and the Capital Hill has to discuss, so that the state can continue to flood the extended fleet and need of agents around the President. The state cannot afford to go broke and not pay the security guards. Then, the state would see deserters without pay or resignations, as who wants to be working for a state; a state who doesn’t pay the salaries and the overtime. Peace. 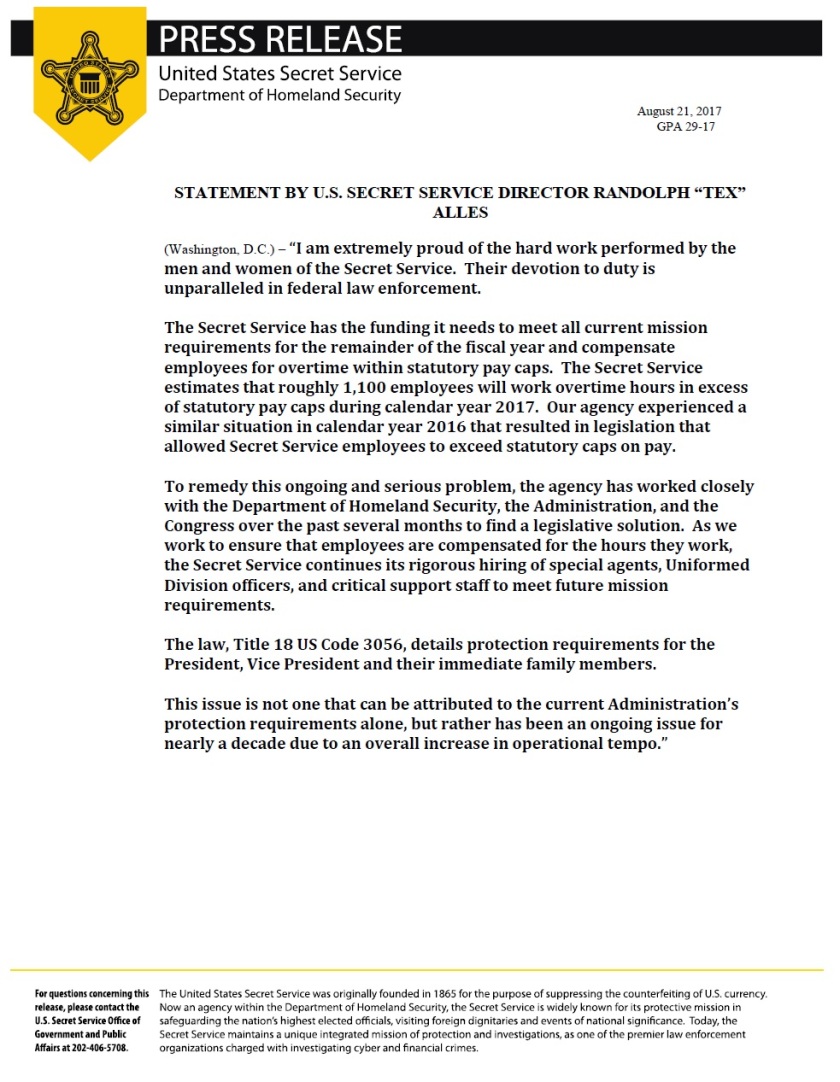