Archive for the tag “PSCU Kenya”

The fall of Itumbi: Gone from a propaganda machine to a nuisance!

Well, Dennis Itumbi have been a vital part of the rise of Jubillee. The man who uses his communication technics and savvy ways to intimidate and silence witnesses for the key suspects during the International Criminal Court case against DP William Ruto and President Uhuru Kenyatta.

He was also vital in the run-up to the 2013 Elections, his blogosphere and his team of propaganda unit, which in the end launched the Presidential Strategic Communication Unit (PSCU). Where he together with Cambridge Analytica used all of his skill-set to publish, write, manufacture and misuse information in a way that hurt the other candidates and peddled the need stories to fit the President and his Deputy.

Now, in 2019, two years after the General Election and Fresh Presidential Elections. These services is not needed. Even last year there was reports of his demise and that he was kicked out of the State House. That the PSCU was disbanded and his office emptied.

This man has already forged dozens of letters for the Jubilee Party and associates, he has already been well-known for carrying out open assaults and disfranchising people whose been troublesome for the regime. Therefore, when he earlier wrote the fake assassination letter aimed at the DP, this was just another day in the office and life Itumbi.

We can act like we didn’t know, but this man has done the dirty work for the Jubilee back to 2011, even caught that he was a hired blogger for Jubilee in 2012. Since then risen to the ranks, and is now said to be working in the Office of the DP, as the Secretary for Digital. Surely, a man like the DP would need a man like Itumbi. He could make some clever ways to make him look smart and peddle narratives that makes the Hustler look brilliant. However, with the recent misstep and backfiring approach. The man has been caught and will struggle this time.

That Itumbi is in trouble isn’t new neither, back in the day, he was in trouble for having classified document on Kibaki and the British government will file a case against him in the ICC.

We know all of this is hurting the pride and honour of the DP, as K24 TV presented the trial today: “UPDATE: MPs ‘allied to DP Ruto’ present at Milimani Law Courts where Dennis Itumbi is arraigned. Some of the lawmakers present are: Kimani Ichungwa (Kikuyu), Oscar Sudi (Kapseret), Didmus Barasa (Kimilili), Caleb Kositany (Soy), among others. Itumbi is accused of circulating alarming information in regard to the Ruto ‘assassination’ plot” (K24 TV, 04.07.2019).

We know that Itumbi is losing and his ways is exposed, that his propaganda and his techniques is the reason why his charged and will be behind bars. That Itumbi has misused the power given to him and haven’t changed ways from the time in campaign-mode. Itumbi thought that loyalty amongst the highest ranking officials would be there. However, he now see that he was just a useful pawn on the chess-set and that the kings will not save him.

That Itumbi have forged before,  that he has spread lies before and that his ways has been dangerous is all true. Itumbi have risked it all and seemingly got nothing for it. The man in the digital sphere, who had a vital part in the PSCU and is now behind bars awaiting further investigations. That’s where it ended for him.

He is now an nuisance, a relic of the past, one that Kenyatta want to get rid off and got the perfect excuse as well. One that Itumbi created himself, therefore, his own demise was his own making. Even if it was ordered by the DP to gain possible sympathy. Because, this is what he does and what been his trademark.

His been faking it and hoping that he would make it. In the end, his being whipped with the same force, as his words and stories against opposition figures. He is getting caught in the same web and has no way out. Peace. 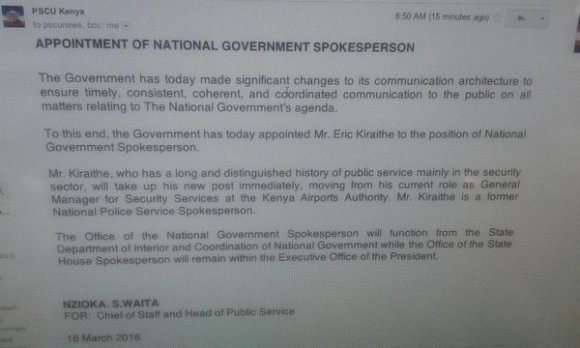