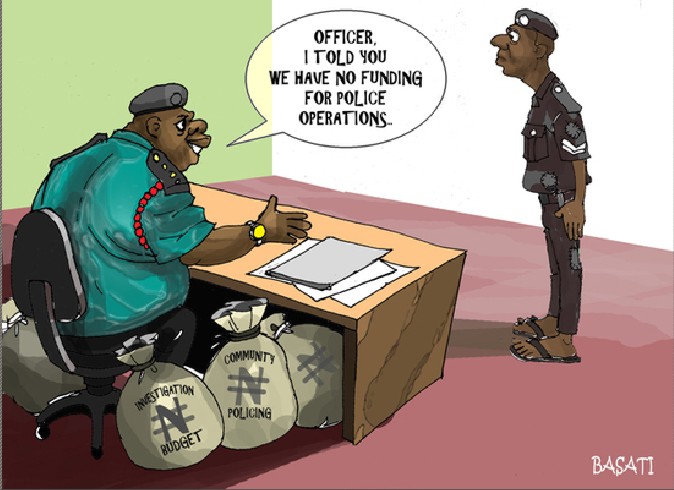 We should question the ability of certain leaders to be able to squander away government funds, donor-funding while keeping their citizens in poverty and neglect the civil service, the state functions and keeping the state fragile; so that the Executive can brown envelope the Members of Parliament and that other civil servants to get paid, instead of government salaries depend on being paid under table for government delivery.

This is not one nation problem, this is not a one continent problem, and this is a worldwide problem. Not only government acts like this organizations, multi-lateral organizations and businesses. Corporations and other LLCs are also misusing their fortunes and ability to generate wealth for their stakeholders through intricate and complex banking structure that fixes the profits away from the countries we’re they earn high profits; while squandering away the profits so that the owners and stakeholders gain massive funds and leave the consumers, workers and the nations as they keep the funds away from the State of real business.

Why can I address the neglect of government in the same regard as tax-avoidance in modern business, because the same ethics and norms are made and regulated by the Parliaments, Executive Power and by the interests of politicians; that needs funds and create business in their constituency as they earn currency on opening business there. So with that in mind, the way the business is set-up and regulated are by admission from the political framework and laws, not to talk about tax-regulations together with multi-lateral agreements that either opens or closes doors for tax-fugitives from the profitable country.

The Government are the Sovereign Power, the ones that represent and distribute the resources and funds to their citizens through departments, ministries, institutions and programs that are sufficient to make sure of education, security and development of the country. That happens as they can either use their taxes, aid and loans to fund the government work. Well, they could if they wanted to represent the people who paid the tax and elected them.

One key reason for the maladministration and mismanagement from the government are that they are responsible for sham elections and rigging themselves in power; worst case scenario the government and executive took the power with the gun; so the responsibility is more on the ammunition instead of the transparency and accountability towards the citizens. The citizens are supposed to have safe-guards from corrupt behaviour and alleged graft; as the Auditor General and Ombudsman are supposed see through the files and budgets, together with registered procurements, so that the actual facts are the same as the planned efforts from the State.

That is why the breaking figures and knowledge of squandered monies from the funds. Something that shouldn’t be that easy to do or get away with; as so many leaders and executives have saved giant bank-accounts in Swiss Banks and in Tax-Havens. So the humble men from villages all of sudden own 30 luxury cars, 4 mansions and have a wife who spends a ministries months salaries on exclusive clothing and shoes in Paris and London. While the taxpayer are struggling to eat and feed their families, which is an issue that shouldn’t be there when the Executive and wife can have a cortege of 25 cars driving from their State House to their Ranch without any consideration.

The worrying sign is that the International Monetary Fund, World Bank and other Multi-lateral organizations don’t sufficiently sanction this kind of activities or even punish the countries with this behaviour; except when the nations are on their back hunting wild goose. The United Nations and European Union, other Pacts doesn’t even sanction much either. The diplomatic tensions and the wish for resources sometimes stop the knowledge of the thievery, if not to save face of both parties as they doesn’t want the public of the nation importing to know about the maladministration.

What I am wondering with all the corruption scandals, with the rich executives and the haemorrhaging of monies from the state and businesses; It happens daily while the begging for funds from international community and also getting investors from the exterior to invest in business. These businessmen are set in function with civil servant and government officials that are corrupting the state; something that the world knows… and still keeps it going around.

Certainly the knowledge of this isn’t something in the shadow, some places all of this is in the spotlight and expected by the officials, as a second way of getting add-ons on their meagre salaries as the government doesn’t pay enough or on time for the Police Officers and Teachers to secure pay to pay for food and even rent. Therefore the system generate where the Government can’t even supplement funds for their own, while their leaders eat the most delicious stakes. This should be a warning, but the world moves on.

What worries me… is how this keep on happening with different names, different places and with different funds, while the sanctions and the stopping of funding from the communities doesn’t stop; while the massive overload of stolen monies are hidden and the ability to use this banked currency in developing the state and nation, instead lost in trail of lies and deceit where the accountability got dropped in the ocean.

We should question these transactions and not accept these facts of life, this is the ones that steal the development and progress, steal foreign taxpayer’s monies into personal bank-accounts and private business of elites instead of the public functions as they we’re supposed to go.

I am just writing in frustration… and tired of seeing and hearing about the scandal after scandal… While the ones dishing it out are silent, while the punishment is not happening and the characters who are behind the thieving is walking like kings and queens in main-streets of capitals all around the world. That is what is bugging me. It shouldn’t be like this and the behaviour should be tormented, questioned and also charged for their stolen cash. This cash we’re not automatically made for and created for the Executive’s and their Elites; which isn’t justified. So why does it seem that some people are allowed to steal a country, steal a national treasury and the foreign exchange funds are walking scotch-free while hanging around the mayors and government-officials; but when a pocket-thief or a man stealing a goat, gets detained and not hired again.

The rules for this is provable not equal, not for all men are equal under god, except if you like shrimp. Well, that is not the case in this matter, there are too set of standards, the Executives and their Elites; while the citizens and public are a disgrace and can be disregarded easily, but the rich can get-a-way-jail-free-card! Peace.