Today there was the Supreme Court ruling that dissmisal of the Election Petition number one, and therefore there was all of a sudden a giant celebration, so big that we can forget the Nomination Day in Kampala; when Dr. Kizza Besigye was sitting on the chair between Central Kampala to the Stadium where he had the first rally of the pre-election period and Presidential Campaign. Here is two pictures show’s the” massive” grand celebration for the NRM and the President Museveni re-election in Kampala! 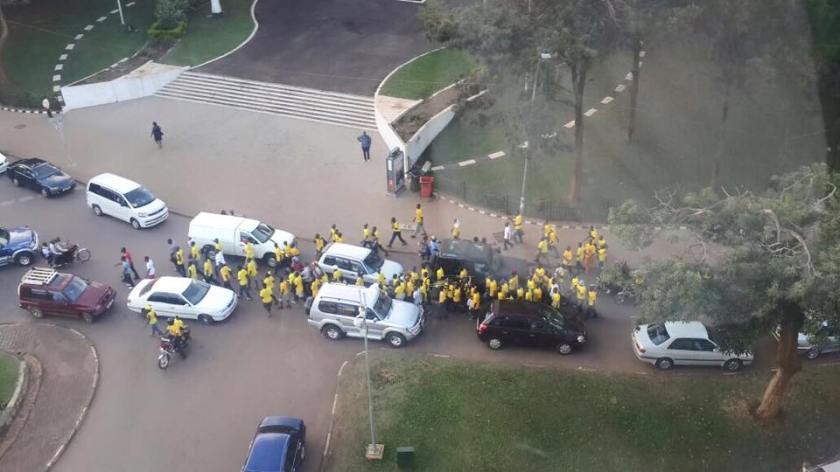 How the NRM got the crowd today:

“The National Resistance Movement – NRM hired boda boda riders and skate boys to hold stage-managed celebrations in Kampala, amid heavy police deployment. The public ignored them, which is a huge political statement indicating the unpopularity of President Museveni’s electoral and court victory among Ugandans”. 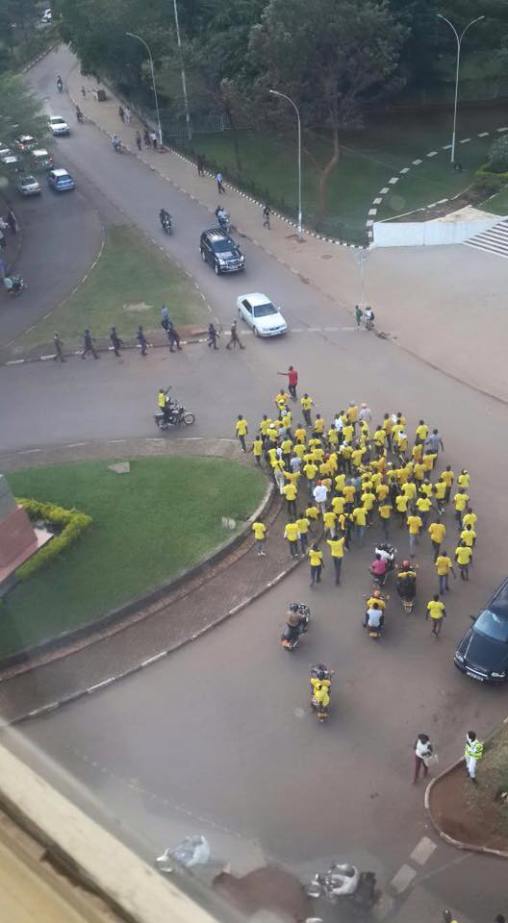 Somewhere sits Dr. Kizza Besigye, wait, he sits in house-arrest in Kasangati and laughs at the meager display from the NRM-Regime. He should have a laugh at this, because this proves his rhetoric and arguments earlier today. Peace.

“Amama Mbabazi addresses the media and talks about the cases of alleged police raid on his lawyers’ offices in which materials and evidence linked to the election petition were stolen. Mbabazi also briefly addresses reported cases that some of his petition witnesses have been arrested or are being harassed by police” (NTV Uganda, 2016).

This here is not a beautiful view and a wonderful story of how a the oppressor change their ways, it is more of the same, as the NRM-Regime and undercover Police, or under Police supervision has raided two of the lawyers of Go-Forward Presidential Candidate Amama Mbabzi during the night.

The lawyers who has been attacked during the evening, lost their documents and their computers was Muhammad Mbaabzi and Fred Muwema, the ironic part is during the morning hours the media was arriving hours before the Police came back to the scene. After a long while they have sealed of the offices and the laywers are not allowed to enter into their own offices. As they are working on the Presidential Candidate Petition on the election fraud of Presidential Election during February!

This here is the continuation of violence against the opposition and their freedoms as they try to get rid of evidence showing the electoral fraud, as they have taken FDC officials and FDC agents with Declaration Results Forms from the polling stations, now they take the offices of the lawyers as a continuation of the oppressive methods of the ruling regime. Here are today reports and they are bleak!

“Mbabazi lawyer Basalirwa: “We’re taking a constitutional path by going to court, unlike Museveni who went to the bush” (NBS TV Uganda, 2016).

“My colleague in the profession and a personal friend, Muhammad Mbabazi, requested me to pass by their chambers this morning to share with them the relevant evidence in my possession regarding the impugned sham election. I was, however, treated to a rude shock to find their entire firm in disarray as unknown assailants ransacked it last night. Surprisingly, the security agencies had not cordoned off the scene of crime, neither were they deployed in the vicinity yet Wandegeya Police station is a stone throw distance away. This strange conduct of police, who, ironically, pitched camp at the residence of the Dr. Besigye ostensibly to ward off crime, renders credence to the school of thought that the police are culpable. God save this country”

“The offices, one on Acacia Avenue in quiet and leafy Kololo and the other on Buganda Road in Kampala, were reportedly broken into at about 3am” (…)”Mr Mbabazi said the police should explain what exactly happened at his office. “The police were seen to have come here. They came, they broke [in and] they took away whatever they took. So I report to whom? They should be the ones to come and tell me ‘we came in, we didn’t find you then we broke in’,” said Mr Mbabazi during a televised interview an hour ago. At the time of filing this story, the police had not yet established the circumstances under which the office was broken into, despite it having private guards” (…)”Mr Patrick Onyango the Kampala Metropolitan police spokesperson when reached for a comment, said: “We have sent our officers to establish what exactly happened. I cannot comment on that matter before I get a report.” (…)”According to one man who claims to have witnessed the incident, about 30 people were involved in the break in. “They were about 30. It is those who were in plain-clothes who entered; the [uniformed] police watched from the sidelines,” the man claimed. The burglars reportedly came with a ladder, which they placed by the perimeter wall to climb over the wall” (Wesonga & Kato, 2016).

Another laywer got a break in:

“FULL STORY: “The police were seen to have come here. They came, they broke in, and took away whatever they took. So I report to whom? They should be the ones to come and tell me ‘we came in, we didn’t find you then we broke in’.” According to Mr Asuman Basalirwa, another of Mr Mbabazi’s lawyers, the team spent much of Tuesday receiving witnesses they will call upon to testify for the Amama Mbabazi petition against the election of President Museveni (Daily Monitor, 2016).

“Personnel of SPC Security told Mbabazi that around 3am, about 30 uniformed policemen raided the offices. Their plainclothed colleagues broke in and took computers and documents. The alarm went off and the SPC Security Quick Reaction Force soon arrived. They were arrested, badly beaten up and are now hospitalized”

URN: “Fred Muwema Kololo offices sealed off after early Wednesday morning break-in. Muwema’s office is located in Kololo, Acacia Avenue, opposite Metropolitan Hotel. Muwema is one of the lawyers handing the presidential elections petition filed by Amama Mbabazi challenging the results of the February 18, 2016 elections” (URN, 2016).

“Fred Muwema, also Mbabazi lawyer had his office broken into. No one allowed in as they wait for police to get here” (NTV Uganda, 2016).

“Basalirwa said yesterday that at least 12 witnesses, who had travelled from five Busoga districts, were arrested as they arrived for a meeting at Mbabazi’s Kololo residence” (…)”When they arrived, police officers came and asked them where they were going, and when they mentioned that they were witnesses in Mbabazi’s petition, they were bundled onto a police patrol truck and a Super Custom and driven to Kireka [Special Investigations Department headquarters],” Basalirwa told The Observer yesterday” (…)”We reported last week [that] six polling agents were intercepted on February 29; they were polling agents from Nabweru and Kakiri in Wakiso district, and were heading to Kololo [Mbabazi’s residence] in a Toyota Noah registration number UAP 710N and in possession of original declaration of results [DR] forms. They have since gone missing, and the DR forms which were part of the evidence for the election petition are also missing,” Nakaweesi said” (…)”Such acts are meant to destroy credible evidence that supports the petition and also intimidate witnesses and other conscious citizens who want to submit such evidence,” Nakaweesi said”  (Kaaya, 2016).

I think the stories speak for themselves as the lawyers who works for Amama Mbabazi are stifled by Police and the men honoring the President as he does what he can to dissolve rule of law in the name of Museveni, as he is the law and the ruler, allowed to do as he please while the other people have to obey him. As it seems, Amama Mbabazi continues to work against the machine of ruling party. With taking the witnesses to prison while now raiding the lawyer’s offices and then sealing them off. This is a sad day, see how far the government has sinks in respecting other people and even the men who works for obeying the laws and defend the rule of law.

This is a way of the ruling party to dissolve the petition and spread fear, as they are known for and this is a continuation of it. Peace.