“The brutal search for missing arms in Mumias has been stopped. The order was made by the Mumias West area deputy county commissioner Philip Soi.  This comes after a public uproar on police brutality during an operation to search for 7 guns stolen by armed men last week.  Residents have accused police officers of using unnecessary force. Soi, stated that the police force will employ other alternatives in the search” (Kenya NTV , 2016) 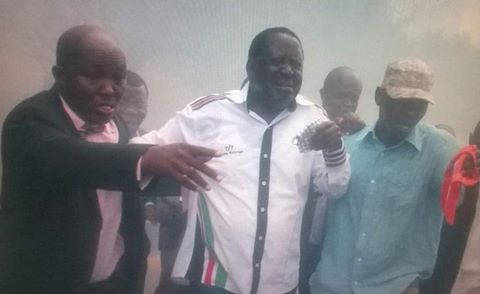 Just as the dust-settles and the tear-gas canisters get cleaned away from the area of the Anniversary Tower of Nairobi after the demonstration yesterday that ended in Police Brutality and arrogance from the Kenya Metropolitan Police Japhet Koome and his IGP Joseph Boinnet. They did this in service for the ruling party and the ruling government.

Ladies and Gentlemen President Mugabe of Zimbabwe because of yesterday have let the world know that Hon. Raila Odinga cannot look at the Lancaster House in Harare and see the inflation levels up-close in the Republic of Zimbabwe. That because the grand dictator of Southern Africa is disgusted with the actions of the CORD leader and his Political Alliance.

Let’s be clear, for the Jubilee Alliance Party MPs and Leaders speaking their mind and trying to deflect the issue. The Danger is the vacuum that the political framework is creating. Everything can’t be fixed building walls even if Donald Trump and Ministry of Interior CS Joseph Nkaissery building them to secure themselves. The same metaphor should not happen between the current ruling party and coalition towards the ODM, WDM and FORD-K of the CORD. That will just make it more heated then needed in the coming months.

Just as this is happening certain voices has answered with this:

“Chief Justice Willy Mutunga has condemned the Monday teargassing incident by police on a group of CORD protesters who were calling for the removal of commissioners at the Independent Electoral and Boundaries Commission” (…)“The past is never dead. The past is never dead. It’s not even past.” William Faulkner. “Faulkner’s quote is my very painful reflection that teargassing of peaceful demonstrations has not been our past since our independence!” said Mutunga on his Twitter account” (Ombati, 2016).

This is a just answer to what happen as the Police shouldn’t attack fellow citizens in this way. That is not the way of creating dialogue between the CORD and JAP. That just becomes to stale counterparts who creates an environment that makes it harder to reform and make changes in society as the CORD will be bluntly pushed away by the security forces and Police Force without any impunity. Then I came over this fellow. The Embu Senator Lenny Kivuti said this!

Also the other reaction the CORD demonstration yesterday:

“We are thankful to God the way Kenya has been peaceful. We do not wish the country to plunge into turmoil again,” said Mr Kivuti” (…)”Anyone who has evidence against any IEBC official who has done something wrong should come forward,” said Mr Kivuti” (…)”Those against IEBC (commissioners) should start their campaigns early,” he said” (Wanyoro, 2016).

You are right at some Point, but the ones creating violence and tension yesterday wasn’t the demonstrators, but the Police Force and their reactions to the demonstration itself. This is the chain-reaction from the ones shooting the tear-gas and demolishing the citizens who have reacted together with their political party; something that Mr. Kivuti should understand as a political figure himself.

Well, the issue I have is that the IEBC have acted in bad-faith and created a uncertainty of their connection towards the ruling regime and the coming election if they will be civil. Then the IEBC need to be a unit that is not connected to none else then the procedure. The IEBC should be independent and not be partial towards any government or the Executive.

That is the issue that the Opposition have since the lawfulness of the Electoral Commission of the IEBC seems to be embedded with the Jubilee. Since it seems like that and the way they obviously demolished the Constitutional Referendum also questions their level of independence as the rules now is tailor-made for the ruling elite and is not opening up to the opposition parties.

So the Hon. Raila Odinga (ODM), Hon. Moses Wentagula (FORD-K) and Hon. Stephen Kalonzo Musyoka (WDM) the main trio of the CORD went into the cross-fire and melee. Because of the Anti-Riot Police under the regime put the tear-gas and the bullets towards fellow citizens without any questions. As they wanted to get answers for their muffling and hustling the reality coming to the opposition. 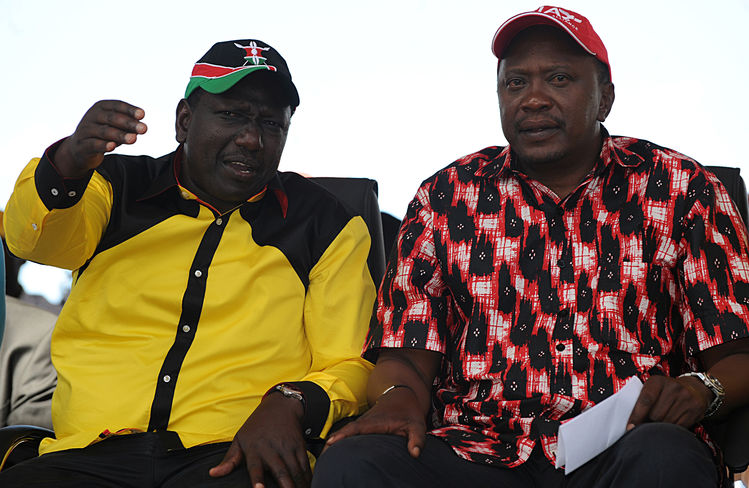 The Ruling Party and the Opposition need both to relax into the coming months even as the aspired campaigning will start. The worry is that the police of Nairobi have set the precedence and might even create more havoc for the opposition as the ruling party can do as they do without any questions. That with the sense of how the Police entered and made the situation more unclear at Kakamega around 2nd April 2016; where the Police even hurt fellow protesters and fellow supports of FORD-K and ODM supporters. This here is not now a single incidence at the once again the Police went all-in in Nairobi yesterday.

The IGP Boinnet need to think through if his loyalty is to the citizens of the Kenyan People or the President and his ruling regime. The same must the Nairobi Police Commander Koome need to think about. Where does their loyalty lay we may ask? 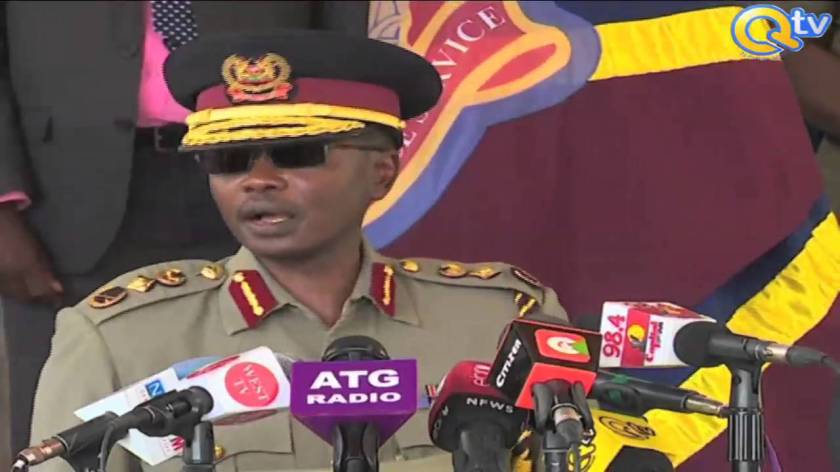 The other question after yesterday should be to reconcile the Opposition, the Police and the IEBC quickly and briefly if not then the hate-speeches and the termination of the resilience of the opposition will prosper in the vacuum created by this. That is not good for the ruling regime and their rhetoric. Especially, if them in the JAP speaks like the Senator Kivuti, who blames the Opposition for it, and not the ones who created the mess yesterday. Then you will have a stalemate and none will be able to counter each other in peace.

The peace that it will be will be shallow and the sudden impact might arrive later and nobody wants that. The need for dialogue and create an established level playing-ground. Not build walls, not throw tear-gas and not call each other out for non-sense need to be made. As the CORD only did what they knew, as much as the Jubilee live in arrogance and elitist place where the CORD wishes seems to be extra work and not earn extra on. Therefore the reforms from them are pointless as the ruling regime does not earn on listening to the opposition.

The Ruling Regime seems to be fixed in their own island and think they are untouchable out of reach and the ones that deserve to run the country without question. That is not a healthy position especially when the bodies that runs elections are questioned for their independence from the current regime. Not that the opposition is always right or always wrong. But when they can question the behaviour and the actions of the institution and then get tear-gassed for doing so; then there are something missing in the dialogue between the opposition and the government body. The Government is an overbuilding of all the citizens, even the ones that didn’t vote for the current government, the government represent the whole country even the voters and supports of the CORD; they do not only represent the JAP. That is important thing to put in mind and in spirit of the discussion and movement into the coming elections in 2017.

There are roads to take and hurdles to pass, but the way they are taken will show the true character of the ruling regime and the real ethical space of all actors in the political landscape in Kenya. The determined actions and rational deficiency of the speech and asks from opposition should be worry for the ruling regime. The vacuum and the impression of the stalemate is not creating the effect or the stable consensus that should be there. This not about Hon. Odinga, Hon. Wetangula or Hon. Musyoka and their parties alone, it’s about the image and maturity of the JAP and their president Kenyatta and Deputy Ruto.

The question is: If they will be gentlemen or conning rulers in either the spirit of Mwai Kibaki or the spirit of Daniel Arap Moi? How will the Jubilee want to be remembered and how will they lead into the elections as the legitimate leaders and might be after the elections. But if the elections are run by a questionable government body then the result of the ballot might be altered in favour of the rulers who secures the payment of salaries; instead of being independent of whom ever who runs and who might be running the government and appoint the government body. That is why we have to worry and question the actions that lead to tear-gas around the Anniversary Square and the outcome of yesterday’s Police Force in Nairobi towards the CORD demonstration. If we don’t then we let them get away without even a scratch for the tears and the agony while the ruling elite rides their Mercedes and appoint officials without questions is not a healthy political environment and not the kind of precedence that His Excellency Kenyatta would leave his name to and be remembered for. Peace.