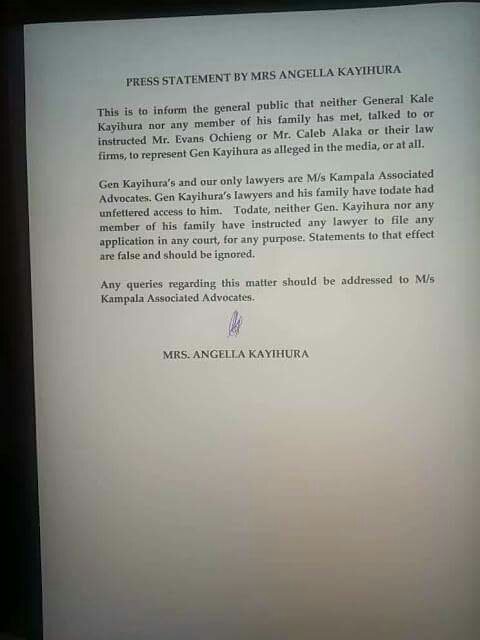 Now the General, the former Inspector General of Police Edward Kale Kayihura is now taken into custody, he is charged with the killing of AIGP Andrew Felix Kaweesi from last year. He was taken from Mbarara, the police searched the hotel in Lyantonde and even sent a military chopper to his farm. Clearly, they had planned to apprehend him. The UPDF Statement of yesterday was vague at best and the reality has hit the fan. The kingpin, the man behind the shield is now in custody.

We know they are really gone after him too, as four of his close associates is also behind bars. The men around in leadership roles within the police is now also arrested. That is serious business. Means, that the time of freedom and liberty after ended service is now all gone and the state has started its retribution. This time in the name of Kaweesi.

All of Kayihura and his crew, his farm is sealed off and the ones big-man has now lost all his spark. As he is detained at Makindye Military Prison. Certainly, the arrest of Kayihura is big and many has awaited this. The last 48 hours shows so, as he has arrested many and plenty of petty matters and used political arrests frequently. Clearly, all of the families who has seen their relatives goes punished for being political will get their prayers answered with seeing the culprit behind the matter behind bars.

Here is the new fresh reports:

“Kayihura met with the Chief of Defence Forces Gen David Muhoozi at the army headquarters in Mbuya, Kampala. At Mbuya, he was interrogated for about seven hours until around 8:00pm when a heavily-guarded military convoy of military trucks escorted him to Makindye” (91.2 Crooze FM, 14.06.2018).

This here is really showing how his fate was sealed. The State House decided that now was the time to set it off and signal him off. Even after many years of being obedient and loyal cadre. He is now an outcast and an outlaw. His rank and profile doesn’t matter, he is no a common criminal.

All of this just settle it. The ones time a favourite of the President is now just old hot-garbage. That will get the same treatment has Kayihura has served others in his role as the IGP. He is now soon giving the same plotted downfall as we have seen with other big-men Museveni want to get rid off. This is certainly, because Kayihura knows to much and has had to much connections. That is why he has to taken down now, before he spiral off and even reveal it.

It is official, he is arrested and detained. Certainly, not what Kayihura thought would be the end of his career. Now he will answer for the brutal assassination of Kaweesi. No one anticipated that, but that is front. Since so many people have been put forward as suspects in that case. This is just the nail in the coffin of Kayihura. Peace.

There are something strange going-on in the Republic, the former Inspector General of Police Gen. Edward Kale Kayihura is being haunted by the authorities. The fall from grace is magnificent. It isn’t a year ago since he was awarded an award by President Yoweri Kaguta Museveni and not even a year ago since he was reappointed as the IGP. That after already serving as the IGP since 2005. However, the bucked stopped in March 2018 as the President sacked the former loyal cadre.

Today, the total has appeared, the former loyalists and kingpin, the man who has followed all orders from above is now being searched for by the Police and Military in Lyantonde. We can just wonder what sparked this and what he knows. It is just weird, just as the fall of Abdullah Kiatta of Boda Boda 2010. The fall of Kayihura is sudden out of nowhere.

The Bean Weevil surely has to fly, it has to get enough wings and get away from the Leopard. The leopard is hunting for his prey. I would expect a gazelle or buffalo, but maybe the leopard aren’t that hungry anymore.

We can certainly see that loyalty within the National Resistance Movement (NRM) isn’t worth it. As soon as your used up, get ready to be deemed criminal. The cadre who followed orders and did the needed deeds of the movement is now ready to thrown away like garbage. Because outlaws and criminals, like petty thieves. This being the former IGP of the Republic, who had the role for 13 years and was in the ear of the President. Surely, that should pay-off, instead he loses everything as soon as the title is taken away. That must hurt his pride.

He went from being regarded and respected, hated too, but also a man whose orders meant something. His choices and his appointments meant a lot for the ones who was selected by Kayihura. Now the same people are haunting him. They are hunting him and that is blessed by Leopard.

The leopard doesn’t care, he is just ready for his prey. He is ready to take the bean weevil down. The reports are the Special Force Command of Gen. Muhoozi Kainerugaba, the Presidents Guards, who has arrested him and being detained at the Seniors Officers Mess in Kololo, Kampala (NBS TV, 12.06.2018). Clearly, he must be stunned to be captured there. What the police did in Lyantonde. Who knows, but they we’re out looking for insects. So maybe they catch a few ratchet grasshoppers on the way. So that Kayihura doesn’t feel so lonely. Today, on the 13 June 2018, there are verified reports that Kayihura is now summoned to the CDF David Rubakuba Muhoozi. So there is still uncertainty, but that he is trouble, that is for sure.

What we know by now, is that the leopard has no mercy and not even to his own. He will not leave the wounds open and leave the ones leaving the fold, without some sort of retribution. No one crosses him without being touched. This is the fall, the mighty, mighty fall. Mount Everest and down to Sea-Level.

The Leopards Anus has now taken the Bean Weevil, what is the next move? What will you do now and for what reason will you use? Is he threat? Has he kidnapped the soul of the President? What did Kayihura do?

We can only await, but surely he will not be a cadre anymore, he will be a common criminal in the hands of the authorities. The state has taken by the presidential guards. There is no turning back now. The Bean Weevil are lucky if he can escape his fate now. Peace. 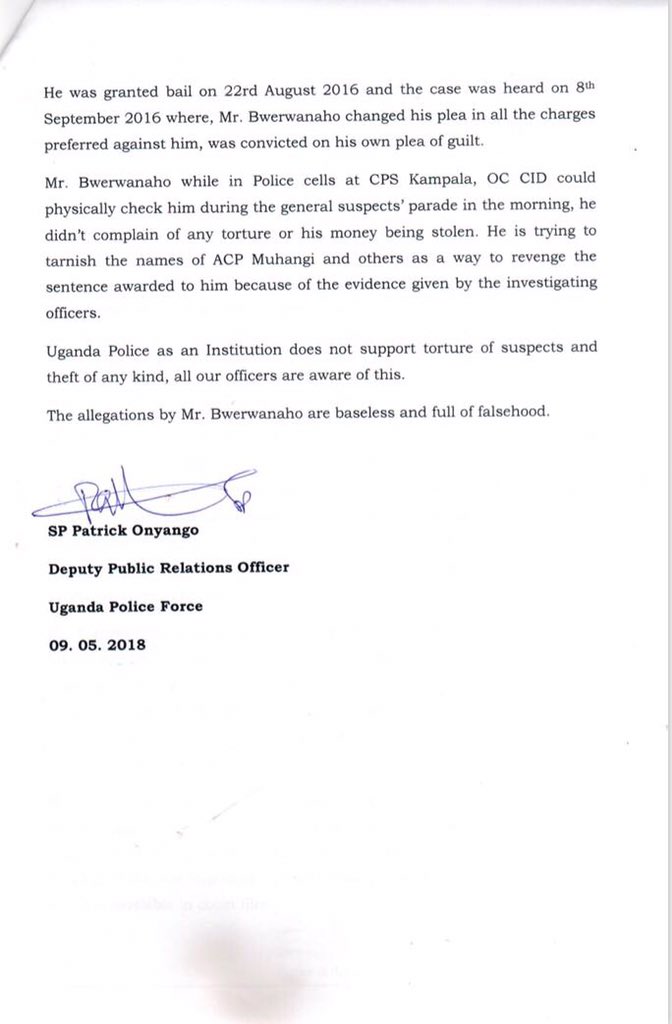 Minister of Interior Jeje Odongo own Ministerial Policy Statement of 15th March 2018 are very standard sort of document, but certain statements from there is telling. Especially on the Vote 120 on National Citizenship and Immigration Control, what it is, is apparently, reasons for why it need to be addressed, because it is a real lack transparency and not taking care of the Republic.

The NCIC is compromised of: “Deployed 300 Immigration Officers and Immigration Assistants at the borders and regional offices. This recruitment and deployment has improved border control and post entry management of aliens. This has improved representation of the ethnic groups of Ugandan and staff gender ratios” (…) “Insufficient funds to undertake constructions: Immigration offices are in very small single room measuring less than 8ftX8ft which accommodates more than 5 immigration staff. Furthermore, the Headquarters is housed in what was formerly a warehouse with some services provided under tents. Limited Staff accommodation. Some borders operate in wee hours which necessitates presence of accommodation for staff. This limits space for offices, e-services and board meetings. The Directorate requires UGX25.8bn for constructions. Porous Borders: Uganda has 52 gazetted border points along 2729 km borderline operationalized through the cluster approach. This leaves part of the borderline unmanned which compromise security and revenue generation. The Directorate requires extra UGX1.9bn for border operations” (MINISTRY OF INTERNAL AFFAIRS – MINISTERIAL POLICY STATEMENT FOR THE FINANCIAL YEAR 2017/2018, P: 62, 71, 2018).

It really is showing that something is lacking when you have 52 borders and staffed three hundred officers. That means that each border post would have about average 5 officers. Just think about that, when the border needs to be open 24/7 and there would be more on certain border-posts, also at Entebbe Airport as well. Since lots of the ones entering Uganda come by planes, not only by foot. Therefore, the NCIC is underfunded, but also understaffed.

The 300 officers are not only keeping track of the foreign workers, visitors of the Republic, but also issuing passports. Therefore, the NCIC is even more important to be staffed, because of the need of control of the borders. The republic cannot have open borders and have control of the revenue and neither also population control. It is seemingly bad planning and at random. But the porous borders and the gazetted borders should have officers. Since they are issuing in the last year over 65,000 passports last year. The Officers are really busy doing and not only looking into the ones moving across the borders.

If this body is supposed to control the migration, register and secure that no-one overstays their welcome. They need bigger funding, more officers and more training. Since that must be lacking, when the borders are seen as porous. Peace.