The Uganda Police Force in actions yet again, they can’t help themselves! This here is a clip of how the Police blocked the procession in Kabalagala in Kampala. They are so Partisan-Police that they all could just wear Yellow and be hired to work in the new call-center to the NRM-Party. I am sure not alone feeling that. 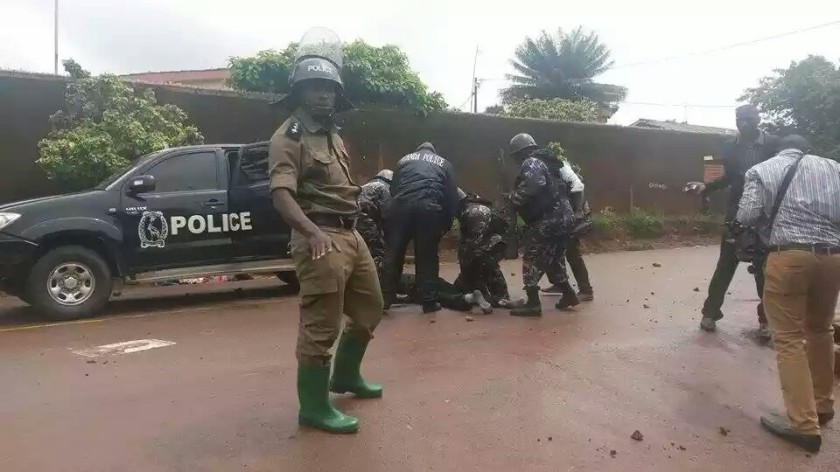 Yesterday, 16th November, 2015, at around 1230 hours, a Delta Television Journalist, Isaac Kugonza, 28, was injured during front line coverage of rowdy protesters at the home of Erias Lukwago, at Lungujja, a Kampala City suburb.
The journalist was taking photos and videos under the security cover of the police, before he was caught up and injured by a stone hurled at the police by the rowdy protesters. He took injuries to the right side of head, where he suffered a wound to the ear and a swollen eye. The Police immediately rescued and rushed him to Mulago National Referral Hospital, where he is being hospitalized.

The victim was subjected to a CT scan and the preliminary examination shows that he is out of danger, and will further be evaluated tomorrow 17th November, 2015. Meanwhile another female victim, Nyamwiza Molly, 21, is also being hospitalized, after sustaining a serious fracture to the leg when she was knocked down by a boda boda rider, who was attempting to escape from the protesters. She had visited her elder sister at Nyanama Zone and was injured while proceeding to Kampala, on her way back to Hoima.

The police upon intervention arrested two suspects that included Erias Lukwago and Sewanyana Allan a Councilor at Makindye Division who are being detained at Nagalama Police Station, while the charges of incitement to violence, assault and malicious damage levied against them are being investigated by police at Old Kampala Police station.
Today’s confrontation between the police and protesters could have been avoided if Erias Lukwago had observed the instructions from the electoral body that deferred nominations to a later date, as they awaited communication on Regulations governing the nomination for the two elective positions of Lord Mayor and Deputy Lord Mayor, from the Minister for Kampala, as required by the KCCA Act. This communication was brought to his attention by the DPC Old Kampala Police Station the previous evening.

The police remain committed to enforcing law and order, without fear or favor, in respect of all people and calls upon each and every one of us to uphold the law for the good of our land.

Look at this clips:

On the clip, you heard the shots right? – that was not stones!

You can write and type hog-wash honorable Fred Enanga to look better, but the video clips and vivid pictures tells a story! How the police vandalized and harrased the public in the area. That was not stoning of a journalist? He was shut by your bullets. You can lie and keep on lying, but the truth will stand. Your not ensuring or enforcing positive actions, instead your creating violence. The world knows that. Your not policing! Proof yet again. Peace!