Archive for the tag “Permanent Court of Arbitration at The Hague”

My Letter to President Duterte: Do you got something to hide? 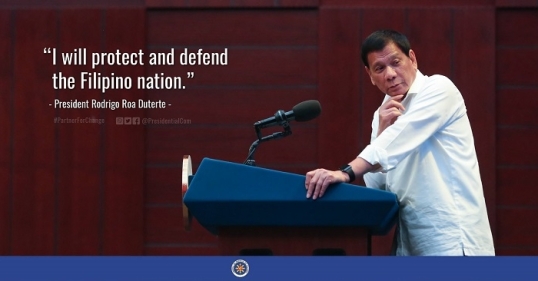 Dear Sir, His Excellency Rodrigo Roa Duterte, the President of the Republic of Philippines.

I am writing today to you and yours for a very simple reason. Not that I have the answers, but I am seeking those. Because I am worried about you and your administration. Since, the act of withdrawal from the Rome Statute and leave the International Criminal Court (ICC) came to affect today.

The reason for writing this is very clear as an outsider, a man who follows the Republic and sometimes worried about the state of affairs. I’m writing to you President Duterte, because this is a serious gamble. Your risking more than just some mere donations or bilateral loans, you are risking more than that.

Mister President, your actually taking yourself out of institution, whose prosecuting for international crimes and crimes against humanity. Which is a very specific court, not just any tribunal. Why I am asking, because your administration accepted the verdict of another international court, which ordered a verdict in your favour. That was the Permanent Court of Arbitration at The Hague on the 12th July 2016 [The South China Sea Arbitration (The Republic of the Philippines v. The People’s Republic of China)]. Therefore, the administration your running has accepted this and didn’t question the sovereign of this nor the laws it used for the ruling of this court.

If you as President are saying the ICC shouldn’t have any grounds of investigation you, than the same Republic and the same administration accept the verdict of another international court either. That is just an easy assessment, Mr. President.

As we are seeing the Republic leaves the ICC, could there be another reason for leaving it? Are you afraid of cases built up against you? Would you be afraid if they really investigated or looked into the anti-drug war? Are you afraid of what you did as Mayor of Davao?

I just got to ask. Since there has to be something, a reason why you are afraid of the ICC. If you had nothing to hide, if you had nothing to look into or questionable activity. You wouldn’t have revoked the Rome Statute and run away from the International Law?

I am really questioning it, since the same state had no issues accepting one International Court, but leaving another one. Are you leaving the laws and statutes of the Permanent Court of Arbitration at the Hague too? That would have been a bit fair, especially if your a supreme sovereign and not wanting any interference. This is a weird argument using against one, but accepting the other one.

I just had to ask. I don’t anticipate any answers, but the Filipino should get to know. Just not some PR Stunt and sample of the Withdrawal of the Rome Statute. There should be released an legal argument released to the public to read and with justified explanation. If not, we can wonder, if the you as a President is afraid of the ICC and what they could find.

I hope you could answer to that and also show grace. Not that I expect any, but as an outsider. This is just weird. No one is running away from something unless, they got something to hide. That is just ordinary fashion in these manners.