This happens in the same time period that Gado the cartoonist at Daily Nation has been under fire for his cartoons of Kenyatta and later was finally sacked for a cartoon mocking President Museveni. So there were already issues between editorial freedom and the government control of media in Kenya under President Kenyatta, as this story will show.

Denis Galava the former editor Daily Nation who got fired for speaking up towards the President of Kenya Uhuru Kenyatta. This here is outtakes from his affidavit and is interesting as he was fired or sacked in the end of January 2016. The gaging of Kenyan Media comes to the surface and makes an impression! 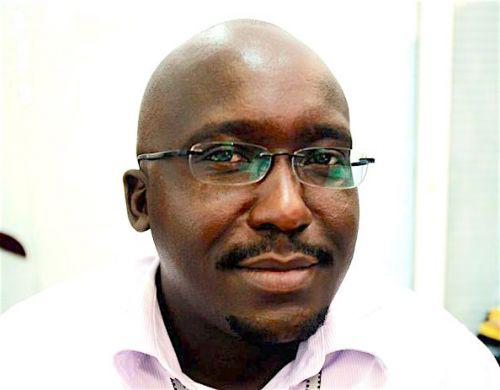 “Earlier in November, the Editor-In-Chief called me to his office for what I presumed was a routine discussion on the investigation docket. We had lined up stories on Eurobond, Jubilie’s Mega Scandal, the death of the manufacturing sector and the collapse of the coffee sector. While not disagreeing with the merit of the stories, he said timing was tricky. For that the Aga Khan was scheduled to visit Kenya in December 2015 as a State guest and the presidency accused the Nation of malice for interesting scandals in government” (…)”Mr. Mshindi also asked me to ask popular Saturday Nation columnist David Ndii to stop writing about Eurobond and NYS Scandal because of his provocative analyses had angered the government and cost the company business. I out rejected the proposal, saying the columnist had struck in the letter and spirit contract of his contract and the reputational damage of us gauging him was not worth the risk” (…)”And the Editor-In-Chief, instead of defending our editorial independence, had chosen to gag us” (…)”My experience with the senior editors and we concluded that the Editor-In-Chief had privilege political sensitivities and personal biases over good journalism”.

How it all started:

“Completed the Editorial at 05:30pm and alerted the acting editor of Saturday Nation to revise it. He told me it was hard-hitting, but truthful. Since the paper was in the midst of a staffing crisis, I also took on a few other tasks that evening – editing the special reports section and ‘Page one’. I left shortly thereafter for the night” (…)”Woke up on Saturday morning to a social media fest over the editorial” (…)”Around midday, the Group Managing Editor (GME) Weekend editions called saying the editorial was hard hitting but objective. He received many calls, most compelling the Nation for finally speaking truth of power and a few from State House officials saying that the editorial was a declaration of war against the president”.

This continued with reactions from the State house:

“It also learnt that there had been a call from a senior State House official later that afternoon which was to be the first rumble the thunder in the brewing storm. The official asked why the Nation was ambushing the President in the New Year. He said the President was angered by the Editorial and intended to take it up with the Nation’s founder, the Aga Khan, who had been a state guest at the 12. December 2015, Jamhuri Day celebrations”.

“the calls had become more frantic in tone. I learned from the GME Weekend Eric Obino that the Editor-in-Chief Tom Mshindi had called him from India saying the government had threatened serious sanctions over the editorial. That NGM board chairman Wilfred Kiboro and called and also written to the CEO Joe Muganda and Mr. Mshindi demanding immediate action to appease the government. Matters were complicated by the fact that for three years, the Nation board and the local Aga Khan network had been trying to reach out to State House in vain”.

“That morning, the HR director returned from leave for a conference call with the Editor-in-Chief, who was in India, and two Group Managing Editors for Weekend and daily editions (Mr. Obino and Mutuma Mathiu, respectively). After the discussion, the acting editor for Sunday Nation was given a first warning letter over the editorial, while his Sunday counterpart was also cautioned over the cartoon published on the January 3 that infuriated State House”

Later on the same day after picking up and taking his niece to school he got a call:

“the GME Weekend editions called asking me to join him at the responding to mounting fury, added to the prevailing bewilderment. According to his statement expressing the official position of the paper, I had not been suspended but rather advised to stay away for a few days”

“the BBC interviewed Mr. Muganda over my suspension. Mr. Muganda said I been suspended for not following procedure in writing the editorial and went ahead to compare me to a bank teller who steal cash”.

“the HR Manager in charge of editorial Ms Jane Mkituri(Not sure) called me to invite me for a disciplinary hearing at 2pm on January 18. She also invited me to respond in writing to the issues raised in my suspension letter”.

Reaction to the letter:

“I was surprised to learn that two hours after submitting my response stating from there were no written procedures for editorial writing, the Editor-in-Chief issued – for the first time – comprehensive guidelines and timelines for writing editorials”.

On the disciplinary hearing:

“I was surprised that I had to defend myself to the very people who has accused me and suspended me unheard – the Editor-in-Chief, GME Weekend, HR Director and Company Secretary (Mr. Joseph Kinyua). I had expected a different, independent panel compromising at least one peer and individuals unrelated to the suspension the law states” (…)”The hearing turned out to be more of a dialogue of the deaf than even my initial cynicism anticipated” (…)”Every question started and ended with the word procedure, with an occasional dose of “disrespecting the presidency and endangering company business”. In 58 minutes, the duration of the hearing, I repeated 17 times that I not flouted procedure since, in actuality, there was no procedure to flout”.

The answer on the matter at the hearing:

“A panelist offered that he would be more cautious if he were in my shoes. Here I stood, he added, both having upset Kenya’s President and the Aga Khan, and risked the business of the paper, and yet here I also stood seeking justification rather than groveling for mercy”.

Continued part of the hearing:

“I explained that this section spoke of content and not procedure. None of the panelists cared to listen to me” (…)”Pushing the file I had given him aside, the Editor-In-Chief said I had hurt him, the tone of the editorial was disrespectful and it was risked the company business. The Company Secretary weighted in with similar comments, adding that this was the most disrespectful article on the presidency he had ever read and that I should be apologizing instead of defending the indefensible”.

Later on the 20th January:

“About 10am on Wednesday, January 20, the HR Director called and asked me to see him in the office at 4pm. He gave me the termination letter for “willful disobedience of the covenants and laid down process and procedures”. I protested this was unfair because in whole of my career at Nation”.

Together with the Gado sacking and this story of how the Editor-In-Chief dedicated the stories and silenced the newspaper and their columnist to fit the State House, is a worrying sign when we think about the up-coming elections in 2017.

That the media have to worry about writing articles to step on their toes and not be able to make stories that they can cover, as the President and his advisor will call the Nations Editor-In-Chief or CEO. As the State House want the investment from the Aga Khan and the State House want to look decent, and not have the story of corruption or scandals out! Peace.