Archive for the tag “P.Diddy”

Opinion: No one cares about French Montana 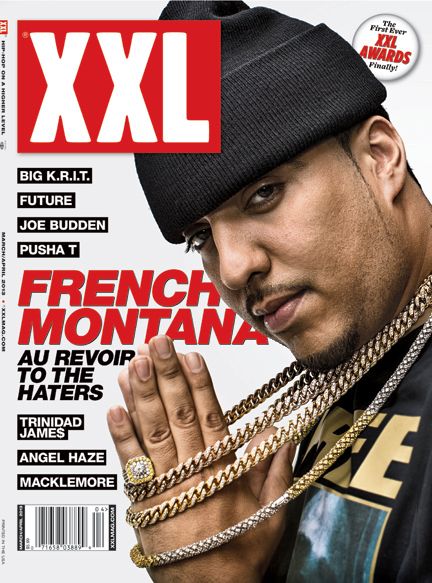 Well, this is not one of my usual one. Its been while since I discussed music. However, I need this in the midst of a pandemic. In the middle of quarantine and home-office. This week there been an influx of Youtube clips discussing French Montana after he challenged Kendrick Lamar. Which is a at best a hot-garbage. Why?

Well, first and foremost, who really deep in their hearts cares for French Montana’s music? A very limited scope of people. His the leach on other people’s tracks and without features he wouldn’t be listened too. His the knock-off Pitbull and Flo-Rida. To be that in 2020 and call out Kendrick is just obnoxious.

Frenchie French should chill. Take the Bad Boy Records Royalties, pray to the almighty lord over the blessings of P. Diddy aka Diddy or Puff Daddy’s connections so that he can public music and get royalties. Because French Montana doesn’t have the ability nor the skills to even compose a memorable song. He needs a feature to pull it off and save the day.

There is so little to say about French Montana. His is irrelevant if it wasn’t for Drake, Sway Lee and whoever letting him jump on tracks. The only reason I have ever listen to him is because his a feature on Pusha T records back-in-the-day and so on. Not because I wanted to listen to French Montana, because who wants to do that?

Unless, your mind is out of whack or high as a kite. There is very little grasp. No wordplay, lot’s of gimmicks and very little flair. Even Waka Flacka Flame has more of stage presence and finesse on a track like a modern day DMX without his ability to rhyme. Still, you remember Waka and you would even remember Lil Jon. However, remember French on something? Would be rare and I cannot even say one song I can remember him as a sole artist.

The only song I remember him on as the hook artist on a Pusha T joint and that says a lot. To be frank MIMS who had one single had more finesse on the one single his known for, than French has his whole career. So, that a guy like French are having the audacity to put himself on the pedestal and above Kendrick is just insulting. Not only to Kendrick, but to the culture.

French is lucky, if he will be remembered at all in the scheme of things. He will be the forgotten feature artist in few years time. The lingering sound-vomit that got lost. The one sort of loosing relevancy like Pitbull and Flo-Rida. Because, they got very little personality and very little versatile. Not like they have a unique character or way of rhyming that stands out. Not like their flows or their choices of beats are special either. They are following trends like sheep and hoping the biggest artists let them on the remix or have a song with them.

French Montana, better pray to the almighty Gods, ask for more favours from P. Diddy and also be graceful. His not a wordsmith, neither a great producer and not a musical genius. His the weird side-kick that needs a bunch of famous friends to hit the charts. It is fine and dandy, but not like he could serve a burning hot lava of bars. Not like French could pull of a banger without someone else being on it. He cannot carry song and ensure it hits the charts. That’s not happening. He needs it and he should know it.

However, self-awareness is a bit much to ask in this case. He has such big words for himself, that he rather drown the words, than trying to salvage something. Kendrick can just spit a feature verse and he can blow up a bad record. While French will nearly tarnish a good record by jumping on it. That also the other difference between these two.

French better chill, take a drink and buzz off. You got nothing and you shouldn’t challenge a King, Take a Snapple and rest. Peace.

In a day where we saw the monster of money winning its second title at Ethiad Stadium. It’s more stories of money and power brewing in the world. We have Dr. Dre and Jimmy Lovine’s company of Beat Elecontrics apparently sold to Apple Inc for a blistering 3,2 billion dollars and making the mighty doctor the first Hip Hop billionaire! Somewhere is Jay Z and Diddy (Puff Daddy aka P.Diddy aka Sean Combs) crying or wondering why they didn’t start selling lavish headphones.

I could have discussed the matters of Fiancial Fair Play of UEFA and their so called fine on Manchester City. In that same matter I could been discussing the issues of Sepp Blatter asking or nodding his head towards the headboard and complying for a new term as leader of the governing football establishment FIFA. No, I am not talking about either. The fall of United and Moyes ousting is not worth mention, though the proposed new signings and use of money will make the Glazers a bit unhappy in New York. At the same time not discussing the power of Roman in Chelsea where Diego Costa supposed to be at next season.

No I will talk about something which isn’t about money madness of the Premier League or Champions League, even if one of that competitions is over, the other one has yet a final to be held the 24th of May at Lisbon. But, still I can tell that is not where my mind is. Not even the flabbergasting last night show called Eurovision. Where the Hungary should have won since that was the best song in my opinion… However, the theme of the song wasn’t really Eurovision like, which was more the San Marino, UK or Swedes. Secondly after reading both national and international press – seems like the Poles and their breast got votes from drunk European men on the continent. Even though the national Eurovision councils and voting agents gave points to the half-man half-woman, That made the half and half a winner, though the rise of the phoenix (by some reports in the international press: the penis) would get the nod of and actually win in the shin ding in Copenhagen. Russia and Ukraine showed their true hearts to each other, then the usual 8, 10 or 12 points to each other.

It’s here the money and madness will be discussed. Referendum votes in the regions of Luhansk and Donetsk regions happen today, and those who voted, is reported to vote for separation from Kiev and the Ukraine state. Something that isn’t surprising for anybody. Vladimir Putin has just recently been in the new region of Crimea. Which for a few months ago was a piece of the federation of Ukraine and had a military and navy base rented to Russia so they had a well, and Ice free navy base, because the ones on the Kola Peninsula isn’t open for a few months of the year. So they need that to have a secure one all year around. Putin just secured the needed base and now own the area. No matter what Europe does or thinks. It’s doesn’t hit him, because well, the sanctions they have showed to the Russian leaders is scrap metal and dozen loads of waste of time and orders.

When Europe is still in the verge of economic recovery and need the big spenders of oligarch money. London and the City would be hurting like a baby who lost their lollipop and then the baby would cry. The Russian gas and money is so needed. Like Manchester City would be lost in the wildness without the Dubai Oil money.

The way it looks like for me. EU and USA is having their hands tied. They have the powers in their hands, but their washing their hands and at the same time trying to make their hands dirty. That is wretched tale that the beard of the recent winner of Eurovision wouldn’t even cut off.

We are here in situation where Russia and Putin has the upper hand and is carving up new territory for the federation. In Ukraine is there it has been mighty and important battles for Russia. It’s a saying: When Kiev sneezes Moscow get a cough. So after the fall of Yanukovych the friend and former president of Ukraine who himself ran to Putin’s Russia. It’s the actions of the former government and the fall of the weak institutions of Ukraine that is unleashing the opportunities of the separatist in Luhansk and Donetsk. These elections are not legally correct after the 92 constitution of Ukraine. So even if the turnout is massive and by expected reports are all for the mighty mother Russia. My bad it’s for independence from the Nazis of Kiev and the democratic European loving rebels of Ukraine. Which is the bad seed if you listening to the rhetoric of the Russian media and master Putin.

We all know there are other actors and other carrots at stake. The dancing Slavic poles from yesterday even know that. Ukraine and the main in the hamster-wheel know that. The interim government in Kiev knows that Moscow knows this. Even if them all is saying something else. And nobody is telling anybody what the else is. We all know that this is for the long term and securing ruling and master of their own backyard. Putin is having the upper hand. Ukraine has the weak but halting support from the rest of the world. Sadly like Goodluck Johnatan has from the rest of the world in finding the 200 missing schoolgirls who is nowhere to be found so USA and UK are sending hostage specialist to help the Nigerians and their effort to find them. Also the rumors of sending them over to the border to Cameroon and sell them. Sounds just like what a group of men who bombs public areas all over Nigeria could do.

The same helplessness must the interim government of Ukraine feel. They haven’t a single shot to go with full force against Russia. It will be run so hard over that the roadrunner would smack their ass before the first bullet gets to say “hello”.

While Putin and Russia can play cool and see the pawns move. Piece by piece getting all bicycles and town of certain parts of Ukraine, if not the whole thing – why not? He has already had one slice, why not the whole pizza and that to go? Please!

So what is next? The money and the madness is already action. The kings has set up shop and playing their pawns. The next move will be interesting but if he is not swallowing the areas of Luhansk and Donetsk. They can either become annexed like Crimea or they will have the stories of the Abkazia(Georgia), Transnistrina(Moldavia) and the Nagoro-Karabhk(Azerbaijan) republics.

What do you think, will the EU and USA really react like grown men or crybabies to the actions of Russia? Will Russia take more territories in their backyard, since they haven’t really paid much for Crimea? What is the next move from either party now that Manchester City, the Poles have washed cloths on stage and Putin has taken a ride in the new Russian territory? Will Obama have another fascinating anecdote in a speech about the rich Russian culture or will he send a transformers -car to Moscow?