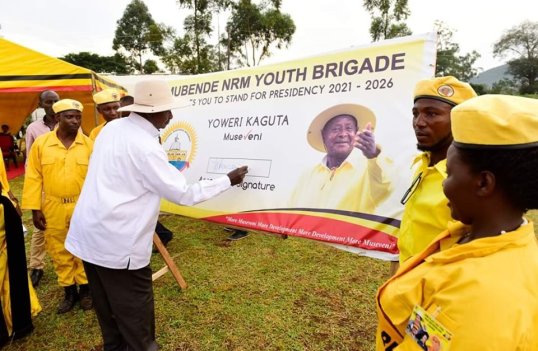 Well, lets settle this ONCE and for ALL. That the trip paid by the taxpayers, by the state to usher in the Operation Wealth Creation Tour, which is a big hoopla by the State House and the President himself. Where he has stages, convoys and sign-offs on projects all across the Republic. Isn’t for the betterment of the state, the citizens or financial growth.

This is all to boast the ego of the President and seal his “victory” internally in the National Resistance Movement to become the SOLE CANDIDATE for NRM and be the eternal guiding star of the “movement”, which isn’t really moving. What the movement is really doing is repeating itself and hoping no-one notices it.

The President is going on a overdrive to campaign for himself, because he needs to settle the score. Even if he is saying exactly the same thing he did 20 years ago in a godforsaken district, which he has split twice since taken the reign. He has maybe said the same for 30 years ago, but who are able to follow all the pledges and promises of the promise-land. Everybody is just busy praising him and ensuring that they will be counted for after the next election.

That is why every village NRM chairman, every LCV and district representative is signing off on charts and on posters, proclaiming Museveni as the SOLE Candidate for 2021. Like it is a secret, like this is a mysterious cult of leadership, where only he can lead them. Because that’s how it seems. They are not even trying to have delegates and an internal election held by Dr. Tanga Odoi. Odoi is in this picture the ugly duck, just catching a envelope for being the chairman of the NRM Electoral Commission. His role there is pointless in concern, as by visiting Mubende district, the President has visited 15th districts to boast his ego.

He has his ordinary agenda, his speech and his loyal cronies following him there. They are blindly putting out the same statements and tokens of representation. These old same-old, same-old stories and proof of what the public need to do. Because, the old man is guiding them, while his campaign on behalf of himself. That is what he does. This trip is all about him. Not about Wealth Creation. That is just the mask of it, the usage of expression for what it really is. To make him look vibrant and ready, to usher in the 9th Term in office and ensure that none one will question him.

That is what the President is doing on his Wealth Creation Tour. He isn’t guiding people into wealth or earning a fortune. No, his ensuring his own position and using the state reserves doing so. He will continue to do so. Because he can and he will. Surely, there will be more than opening roads paid by the World Bank and other donor agencies. Yes, there will soon be gifts doled out to village chiefs, RDCs and whatnot to ensure their loyalty. That is what he does. Peace.

Opinion: No level playing field in the Republic, Jajja’s calvary blocks the Opposition!

Well, over the recent days, there been ordinary news, but if you combine it all. You see a pattern. The Forum for Democratic Change (FDC) tried to access a radio station to a paid appearance with Dr. Kizza Besigye and Partick Oboi Amuriat in Adjumani district. This got cancelled and ended with tear-gas as they was barred to enter.

In a few days ago, the former FDC President and new leader of Alliance for National Transformation (ANT) Gen. Mugisha Muntu tried to hold a meeting in Mbarara, but to no use. As the Anti-Riot Police blocked him and ensured that he couldn’t access the place of the meeting.

As the newly minted Democratic Party Lord Mayoral Candidate for Kampala Jose Chameleone starts campaigning for the 2021 race. His concerts has dried out and blocked by the authorities, just like it has happen to Bobi Wine.

While all of this happening, the National Resistance Movement are holding rallies in several of locations, the President are gracing the local radios and giving gifts to local dignitaries. His even receiving honourable titles in Busoga for Gods sake. The President and his team can be at any venue, with any crowd without any interference, while the opposition will be in hot water and tasting tear-gas before even thinking about entering a crowded street. There will even be machine guns and LDUs gracing the streets to welcome the opposition. That is the current affairs of the Republic.

We can really see a pattern, where the big-man, the President of 33 years can do whatever he wants and campaign as much he pleases. While the rest has to meet the Police, Anti-Riot Police, LDUs and state agents armed to their teeth. That is what striking difference it is there. The closer we get to the elections, the more violent the state agents will be too. Also, expect more of the opposition leaders to be detained and temporary be out of the game. Because of they inciting violence or annoyed the President.

There is nothing new under the sun. However, this is a known tactic will be more fierce. Don’t be surprised. This is who Museveni and the NRM is, even as the PPU and other PR outlets tries to make he look like saint, his act is of a villain. A villain who cannot handle dissidents. Peace.

Opinion: Why not just endorse Mzee for 2026?

Well, the Museveni Wealth Creation Tour of 2019 is continuing and the stories, the endless endorsements in every creek, corner and by everyone breathing is there. I am anticipating a vote for the almighty by the association of goats, wild boars and guinea pigs by the end of next month.

President Yoweri Kaguta Museveni is preparing for 2021, but cannot he just start to do so for the 2026 or the next after that? Since his already doling money and asking for favours like he always do. The President can offer more City Statuses and create more districts. So, that we all can be confused and also the Electoral Commission, so that it cannot see the difference between a previous sub-county and the new district in Kaabong. That is just what is up.

The National Resistance Movement and Government of Uganda, acts like this the new normal. That the President is running around like it is no tomorrow, even when the EC have told that no one should campaign before the Elections Road Map, which is a saga in itself. Not that Bosco or Jajja listens, but we couldn’t expect that from a man with advanced age. These people usually doesn’t listen to younger folks, but gives them lectures. Just like this president does all the time.

That is why the NRM, if it was honest, if it was sincere, would already endorse Museveni for 2026. Even if it many years in advance. Well, 2019 is only two years in advance of the General Election of 2021 and by this count its only 7 years ahead. A little over one term and a bit. Just like it’s a bit and then its polls again.

Well, we know this will not happen, because that would be foolish. Even if it foolish to have the same sole candidate, the same flag-bearer as chairman for 33 years and counting. Well, his the guiding star, the only one close to God and the only one with an vision. So, forgive me for not understanding his place on planet earth. No one can pass his being, his position nor his grace. That is why his the eternal fountain of honour, the one mere mortals only shall ask favours from.

Therefore, if the mere mortals are wise, they could start endorsing him for 2026 to ensure and show loyalty 7 years in advance. That will show the world, the district, the sub-county and their baby mama, that they are genuine supporters of the President. Not like these other fools, who only pledge two years in advance. The people had better show support and now, as they need to get the golden touch, the vision and enlightenment from his almighty now.

No time to throw away. Time to do it now. Peace.

Opinion: [Nothing to see here] Museveni is not campaigning folks!

“President Yoweri Museveni has urged the people of Wakiso to avoid opposition politicians come 2021. This as he presided over the 30th Heroes day celebration in Kasanje town in Wakiso District” (NBS Television, 09.06.2019).

Well, the Electoral Commission has confessed to the public, that unless politicians are campaigning before the Election Road Map, they advice them not to do so and the authorities are allowed to strike with terrible vengeance upon them.

However, the President and his convoy are allowed to travel everywhere. His fellow comrades and supporters are saying this Operation Wealth Creation Tour, the Manifesto Week and such is just spreading the news of his achievements during this current term. However, the President have become the SOLE CANDIDATE and has been ENDORSED in every village and hut his past by. He has hold political rallies and used his usual voter tourism strategy.

We could just stand idly by the National Resistance Movement (NRM) and President Yoweri Kaguta Museveni driving to every stage up-county like its nothing. Spending money like it is no tomorrow. But we all seen this before, as he launching 0,9 km roads and speaking ill of competitors. That is just the way he is and has been for ages. Even if he claims to be longer in opposition, than in government. Someone, please do the Math.

Alas, here we are again, short run up to the elections. No serious electoral reforms, the same rigging machinery in place another blown-up budget and surely there will be a second coming for that. As there is one more calendar year and fiscal year before the polls. There will empty state coffers and the will be several of supplementary funds, which comes to the State House. As they need extra funds for water, wages and whatnot at the State House. Not that its spending on the campaigns, t-shirts, buses, foods, entertainment and a box of Arua Stones. No, no, no, it is spend on the furniture of the President and his Presidential Advisors, all the hundred of them.

We can lie to ourselves, even if the NRM Party says his not campaigning as the sole candidate and getting endorsed. The NRM can say this doesn’t matter, because his not stipulated officially yet by the NRM CEC or NRM internally. However, this will just be rubber-stamped and move along with a photo-session where he runs and goes to the NRM EC and gets the paper by Dr. Tanga Odoi. Dr. Odoi wouldn’t dare to field another candidate against him. That would be the end of Odoi’s career and he would have to flee to Europe as quickly as possible.

Therefore, the NRM and Museveni can lie saying they haven’t been campaigning and only championing the Steady Progress paradigm, while traversing the Republic. But we all know what it is and what he does. If not, he wouldn’t need to be ENDORSED in every village by every goat, man and fellow matooki branch, but apparently he does. Peace.