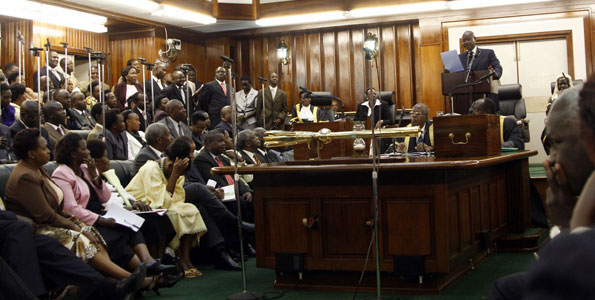 The Parliament of Uganda will, on Thursday, 17th September 2015 hold a special sitting to pay tribute to the late Hon. Gen. Aronda Nyakairima who passed away over the weekend. Hon. Gen. Nyakairima, UPDF MP and Minister of Internal Affairs died in transit to Dubai, while he was returning from an official trip to South Korea on Saturday 12th September, 2015. The Clerk to Parliament has communicated that the body of the Late Hon. Gen. Nyakairima will be brought to Parliament and lay in State for viewing by Members of Parliament and public after which a special sitting will be held at 2.00 p.m. in his honour. An overnight vigil will be held at his residence in Buziga. On Friday 18th September, the body of the Late Hon. Gen. Nyakairima will be taken to Kololo Independence Grounds for a Church Service before being flown to his ancestral home in Rukungiri for burial on Saturday 19th September, 2015. The Late Hon. Nyakairima was in the House between Sept 1 – 3, 2015, when it met to consider the creation of new districts, Supplementary Schedules 1, 2, 3 and the NGO Bill, 2013, which directly fell under his docket and some of which were passed.

Cabinet held a special meeting today, Tuesday 15 September 2015, to pay tribute to Hon Gen Aronda Nyakairima, who passed away suddenly on 12 September 2015, and to receive a brief from the Task Force led by Defence Minister, Hon Dr Crispus Kiyonga, on the arrangements so far made for burial.The Cabinet meeting was chaired by The Prime Minister, Rt Hon Dr Ruhakana Rugunda.

Dr Kiyonga informed Cabinet that Government had on Saturday 12 September 2015 dispatched a team of doctors led by the Chief of Medical Services in the UPDF, Dr James Makumbi, together with two family members, namely, Mr Henry Ngabirano and Mrs Jolly Ngabirano, to Dubai, United Arab Emirates, to work with the authorities there to conduct investigations and to repatriate the body.

Cabinet acknowledged and saluted the significant contribution the late Gen Aronda made to the country’s stability and the unity of the people of Uganda.

Cabinet, however, noted that some elements of society, including some senior leaders in the country were using the tragic passing on of Gen Aronda, to spread falsehoods, negative and sectarian sentiments aimed at inciting and dividing the people of Uganda. Cabinet strongly condemned such acts.