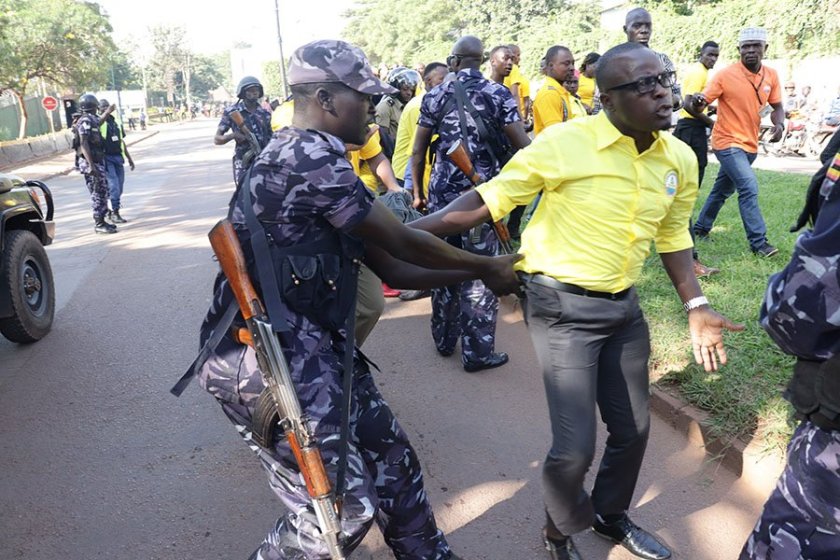 Clearly, there are some mismatching information, as there various reports already. Most of them is about how the authorities sudden cracked down on them, as they were illegally marching in a procession towards the British High Commission in Kampala. This being the supposed National Resistance Movement (NRM) Youths. What making me fuzz more?

Are this affiliated group parts of the NRM Youth League or even NRM Poor Youth. It is something else. It is the newly made NRM Social Media Activists (SOMA), who started their Facebook Group at September 3, 2017. While some claimed it was them, their own Twitter handle has said the people being arrested deserved to be it. As today’s action was deserved. Which is rare too.

“That’s not how they petition @Parliament_Ug !

They adorn themselves in our T shirts but they’re not part of us! Their demonstration is not know within the circles of NRMSOMA. Let them be arrested by police” (NRMSOMA_Official, 14.01.2019).

“The NRM group of people are being paid by the member of state house to demonstrate the UK parliament ruling on the democracy in Uganda. This group of people meets up in the morning at the state house official’s house where they get paid and served with breakfast before they set off to the planned destination. We are being told that each participant gets 100000/= for the day and so far they have been in two places the first being UK embassy and today they went to the parliament” (Nile Post, 14.01.2019).

Whatever happen today in Kampala, is that a group associated with the NRM wasn’t lawful. They were illegally demonstrating and arrested several of them. Which group it is associated with are still unclear. Because earlier this month, the NRM SOMA demonstrated for the same cause, the Anti-UK involvement in Uganda. This because the UK Parliament has gotten a wind of the actions against Bobi Wine and other MPs post Arua By-Election last year.

So, what happen today, is yet another ripple effect of the Arua Stone, of the Abiriga assassination, it is all connected. As it just continues to unfold. It is like the President and the whole NRM doesn’t see it. But everyone should know. That they are just playing the worlds for fools.

It is weird if any affiliate of NRM, didn’t know how to notify and how to ensure the legality of any demonstration or rally. As the NRM are usually on time and on point, if not they are forging the document to make it look legal. That is what we know, we who follow it.

Today is a anomaly, it bends the ordinary fashion, the M.O if you may. That is why all the reporting it doesn’t make sense either. But with time, usually the facts come to the surface and the realities behind it all. But the pictures of the demonstrators doesn’t look to youthful. So, something is up, but what? I don’t know.

However, if any GROUP or any POLITICAL PARTY in UGANDA should know PUBLIC ORDER MANAGEMENT ACT, it should the NR Fucking M! I’m just saying. Peace.

We hereby inform the general public and all the poor Youth fraternity in Uganda that we have rebranded from NRM Poor Youth Forum to “Uganda Poor Youth Movement” to continue mobilizing and organizing the poor youth to oppose President Museveni dictatorial Rule which has made almost all youth poor and unemployed.

The Uganda Poor Youth Movement is a mass protracted poor youth Liberation movement operating at village level in all parts of Uganda to oppose Museveni Tyrannical Rule and we are finalizing a one year process of constituting 100 Poor Youth committee per village which started last year and it will oversee poor youth mobilization and development in every village of Uganda. We are much focused on development and organizing the Youth to demand for there rights.

The Uganda Poor Youth Movement will represent the interests of the poor youth of Uganda from time to time because many constitutional youth groups have neglected them such as the Natinal Youth Council; the NRM Youth League is only for the sons and daughters of the rich and government officials.

In February 2014, the NRM POOR YOUTH FORUM was founded to among others fight for internal democracy in NRM Party, we officially resolved to support the then prime minister Amama Mbabazi for president of Uganda 2016, we categorically challenged the Kangaroo resolution of NRM Parliamentary caucus which sat in kyankwanzi and declared president M7 a sole candidate in NRM and NRM Party chairman without election.

Mr. M7 has over stayed as a president and he has indeed championed sectarianism, racism, favouritism, corruption, etc in both NRM Party and in the Government.

Our determination and will is clear. We must mobilise and unite all Ugandans to support the poor youth led protracted peaceful liberation struggle that will bring an end to M7 Social-economical reign of terror and hence total liberation of Uganda in 2016.
In Executing our Aspirations, we are shall focus more on the objectives below.

Special thanks to Rt Hon Amama Mbabazi, Rtd Col Dr Kiiza Besigye and the development partners within and outside Uganda for all your contributions towards liberation of Uganda.