Yes, as the time goes by… the repetition and usage of a scapegoat wears off. That is just a fact. Especially, when the scapegoat and the villain isn’t as powerful or uses it’s forces. The Prosperity Party and the government institutions are finding all ways to vilify and blame the Tigray People’s Liberation Front (TPLF).

I would never say that the TPLF isn’t at fault and never done anything evil. No, that isn’t justified. The TPLF have their wounds, massacres and tarnished reputation over years in power. That isn’t anything to deny or counter, as that should investigated and challenged in the courts of law. Which any sensible government petition, indicts and sentence criminals to a punishment in a correctional facility. Therefore, that should be done and not just blame it for everything without evidence.

With that in mind… the FDRE Government Communication Service has targeted and lied deliberately about the TPLF. That being the closure of Mekelle Airport or the Humanitarian Convoys to enter into Tigray region. Secondly, now they are blaming the TPLF for the execution of Sudanese soldiers from Sudanese Armed Forces (SAF). Which is hard to believe, as the Addis Ababa has lied about all details in the conflict in Northern Ethiopia.

When you know this… the ENDF isn’t taking responsibility of the executions of SAF soldiers. They are now “investigating” it, but know that they will never take any sort of serious responsibility for it. Because, the regime of Addis Ababa don’t want to loose face and that’s the gist of it.

Just like it always did disclaim the skirmishes last year into the Al-Fashqa region inside Sudanese territory. Therefore, the recent Press Statement made by the Ethiopian Ministry of Foreign Affairs is again blaming TPLF. While not taking into account the knowledge of SAF and the Sudanese who knows who took them as Prisoners of War (POW) and the civilian who was also killed by the authorities in Ethiopia.

So, when the PP and the FDRE Government Communication Service drops their statements, press releases and such. Question the narrative and the reasons for it. Since, they have deliberately acted in disservice and been dishonest in the messaging. Therefore, don’t just listen and take as a truth. That is giving way to a government that easily takes life, creates famine and arrest dissidents.

I’m just asking you to be aware and keeping your head cool. Because, the FDRE and the PP is working for one man and his emperor complex. That should be said and don’t be shocked by that. He wants everyone to fear him and his terror. This is why his time in office should be called the ‘Medemer Terror’. Peace.

The majority and ruling party Prosperity Party have on their verified Facebook page reported directly from the National Movement of Amhara (NaMA) Central Committee meeting, which will be a two-day meeting.

What is striking about this. The need to do this shows how NaMA is embedded in the Prosperity Party. It is a part of it and a direct ally. It isn’t an independent body or can be seen as such. Heck, their own verified page haven’t a new post since 4th March 2022, but Prosperity Party dropped the news about NaMA just mere 4 hours ago. That says something and no one should be shocked.

There is a reason why NaMA is so close, they are the pulse of the Amhara and the allies of the “Survival Campaign” and the genocidal war in Tigray region. They are defending and wants the Federal Government to continue it’s warfare in Tigray region. Surely, they will say the humanitarian assistance blockade isn’t enough. The man-made famine and starvation isn’t enough for them. That is the sort of nationalists and extremists, which are lingering in NaMA. That is the loyal allies of the Prime Minister and the “unifying” Prosperity Party.

That’s why Prosperity Party wrote this about the plans of NaMA:

“As Mr Tahir said, it will be widely examined how NaMA’s role was in destroying the war in the country. It has been said that it will also be discussed on the issues that should be held in the future by evaluating the situation where the survival campaign was led. Regarding the comprehensive and inclusive national understanding, He said it will also address issues that could benefit the people of Amhara in particular” (Prosperity Party – ‘NaMA is holding the Central Committee meeting in Bahir Dar’, 18.03.2022).

If you didn’t believe me that they wrote about making plans for the next 5 years… here is the translation of the text:

“The central committee is expected to discuss and approve the organization’s strategic direction for the next five years” (Prosperity Party -‘NaMA is holding the Central Committee meeting in Bahir Dar’, 18.03.2022).

If you ever wondered about the loyalty or the close connections between the parties. What happened today cements it. Yes, NaMA has a minister in Abiy’s cabinet and is clearly in the ear of the PM. If the PP didn’t care or see any value. They wouldn’t have reported about it and used their platform to tell what NaMA plans to do the next two days. It shows they are promoting and spreading the news about the party.

It shows that there is a possible marriage of convenience between these parties. As the PP see it in their interests to address it and tell what is happening in the Central Committee of the NaMA party. That is really special and shows how the PP acts now.

I never thought this was possible… but here we are. Peace.

Only Honest, Genuine, and All-Inclusive National Dialogue Can Solve the Country’s Political Crisis

It is to be recalled that in the last three years and beyond, the Oromo Federalist Congress (OFC) has been repeatedly calling for a meaningful national dialogue to help resolve Ethiopia’s deep rooted and ever worsening political crisis. For instance, upon the ascendance of Prime Minister Dr. Abiy Ahmed to power, OFC pleaded with him to convene a national dialogue forum where the country’s outstanding political issues to be negotiated and a common road map to be charted so as to ensure a successful democratic transition.

Since then, at every opportunity during the meetings in person or media appearances, OFC’s leadership have been making an impassioned appeal for dialogue and negotiation to save the fragile transition and the country from descending into further chaos. Unfortunately, our pleading fell on deaf ears. When the 2020 election was postponed, OFC called upon the government and other stake holders to seize the opportunity to build a national consensus towards facilitating environment for a credible election. In connection with this, we prepared and submitted a detailed proposal as part of MEDREK. Sadly, instead of listening to our call, the ruling party responded by cracking down on our party, closing down our offices and imprisoning our leaders.

When the country’s worsening political crises led to the breaking out of war in Tigray, OFC once again called upon the warring parties to end hostilities and sit down for a negotiated settlement of the dispute. However, the ruling party and its supporters responded with adverse media campaign aimed at ostracizing and intimidation of our party.

Furthermore, when the government announced to hold election, OFC warned that the country’s situation is not conducive to conduct a free, fair, and credible election. Strongly advised holding a meaningful national dialogue should come first. Once again, the government ignored our plea and went ahead with its sham election that excluded major political parties including OFC and disenfranchised large portion of the electorate. Consequently, the election brought neither legitimacy nor stability as the ruling party hoped to achieve.

Just recently, at the conclusion of the 2021 election that failed to deliver both durable peace and democratic governance for the country, OFC made its position to the ruling party in a form of a press release titled “An election that is not fair and not inclusive cannot deliver democracy”, and once again called for an all-inclusive national dialogue that can lead to an all-inclusive transitional arrangement that can have a mandate to chart a common roadmap that can in turn lead to a stable an all-inclusive government.

Lately, the ruling party has begun talking about the importance of a national dialogue, which many have dismissed as ‘too little too late’. But we say better late than never and strongly advice that it should be honestly and genuinely conducted. At this stage for national dialogue to bring Ethiopia back from the brinks, it needs to fulfill the following conditions.

1. At this time in point wars commenced to settle law and order in the country came to threaten the overall existence of the country, should be stopped and warring parties sit and convey an all-inclusive national dialogue.

2. The national dialogue needs to be convened by an impartial and credible external body acceptable to all parties, recognized and supported by the international community. Here, it also must be noted that given the present political situation of the country, perceived, it is difficult to find a credible domestic entity that is impartial and acceptable to all parties.

3. The national dialogue should be truly inclusive of all political blocks including the opposition armed groups, if it is meant to meaningfully address the issue of peace – the country’s most urgent need. To enable representation of all groups, legal and security hurdles must be removed.

4. All imprisoned political prisoners must also be released and allowed to take part in the process.

In summary, it is OFC’s assessment that trust deficit among elites is one of the major contributors to the current crisis and a non-inclusive gathering in the name of national dialogue convened by partisan entities could only serve to further erode trust making the ability to solve conflict through dialogue impossible even in the future.

Therefore, although OFC had been at the forefront of calling for a genuine national dialogue, unless the process meets these minimal standards, ones again, we strongly feel this half-hearted process would make our participation meaningless and the whole exercise futile. OFC cordially calls for all Ethiopians and the international communities support our effort. 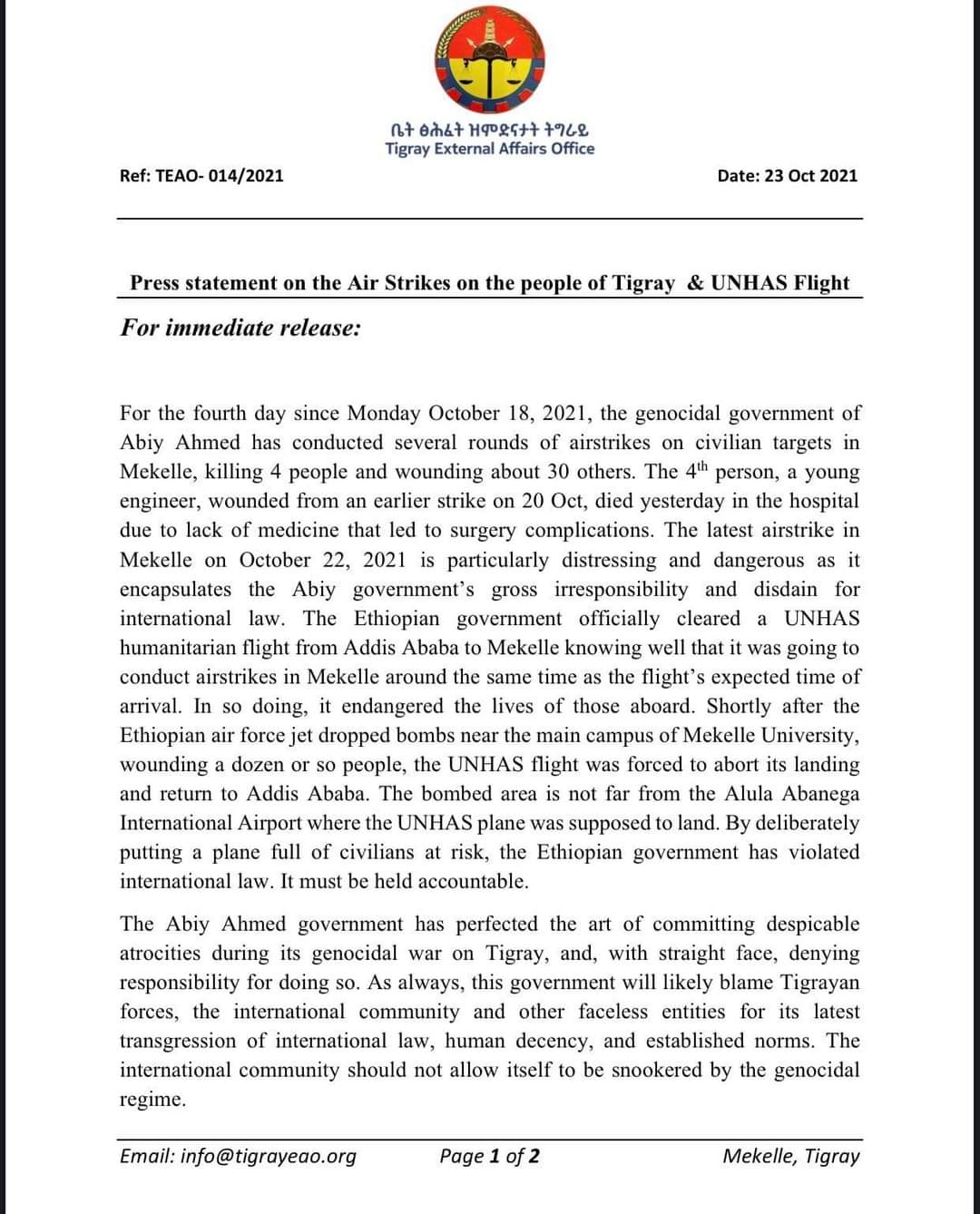 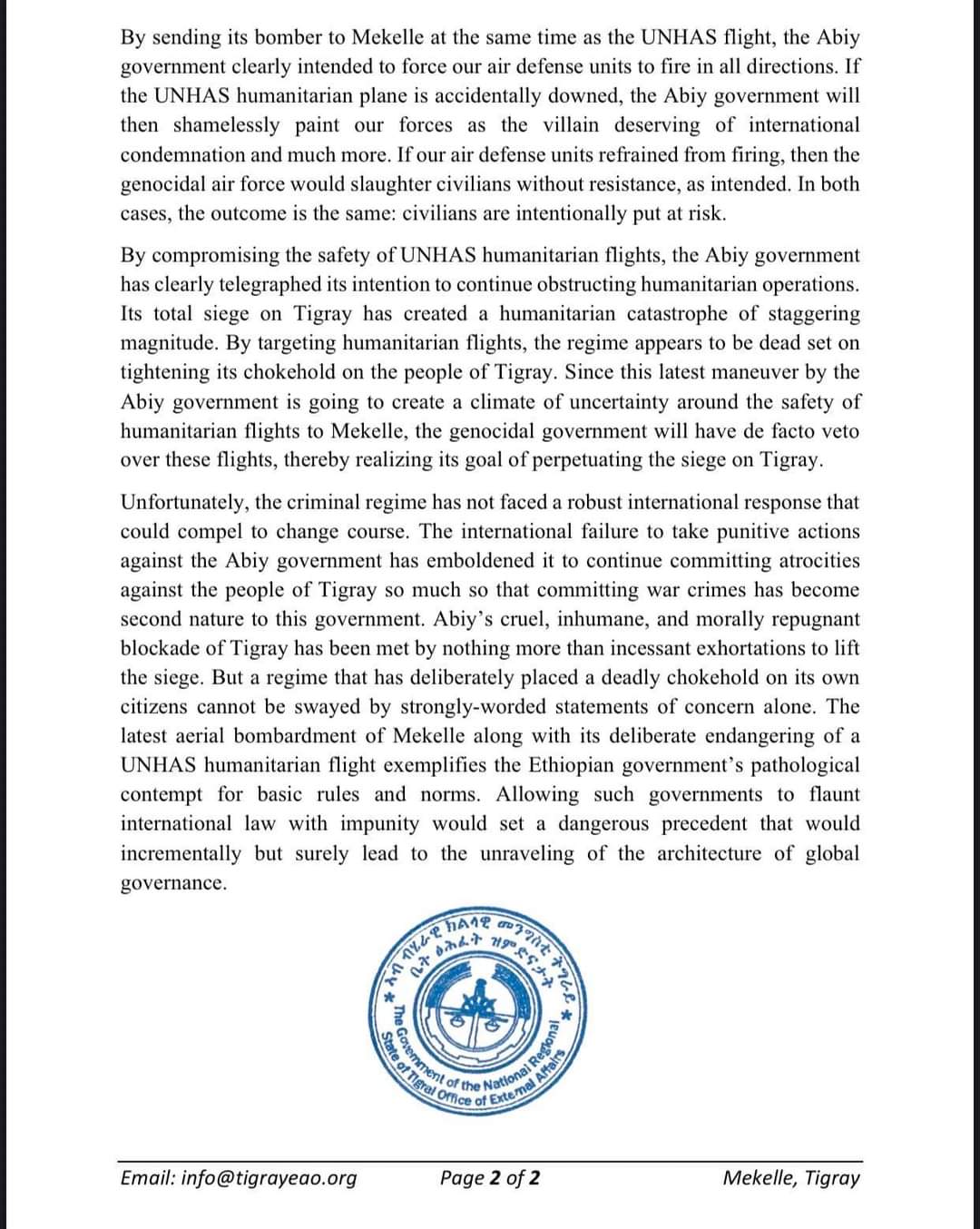 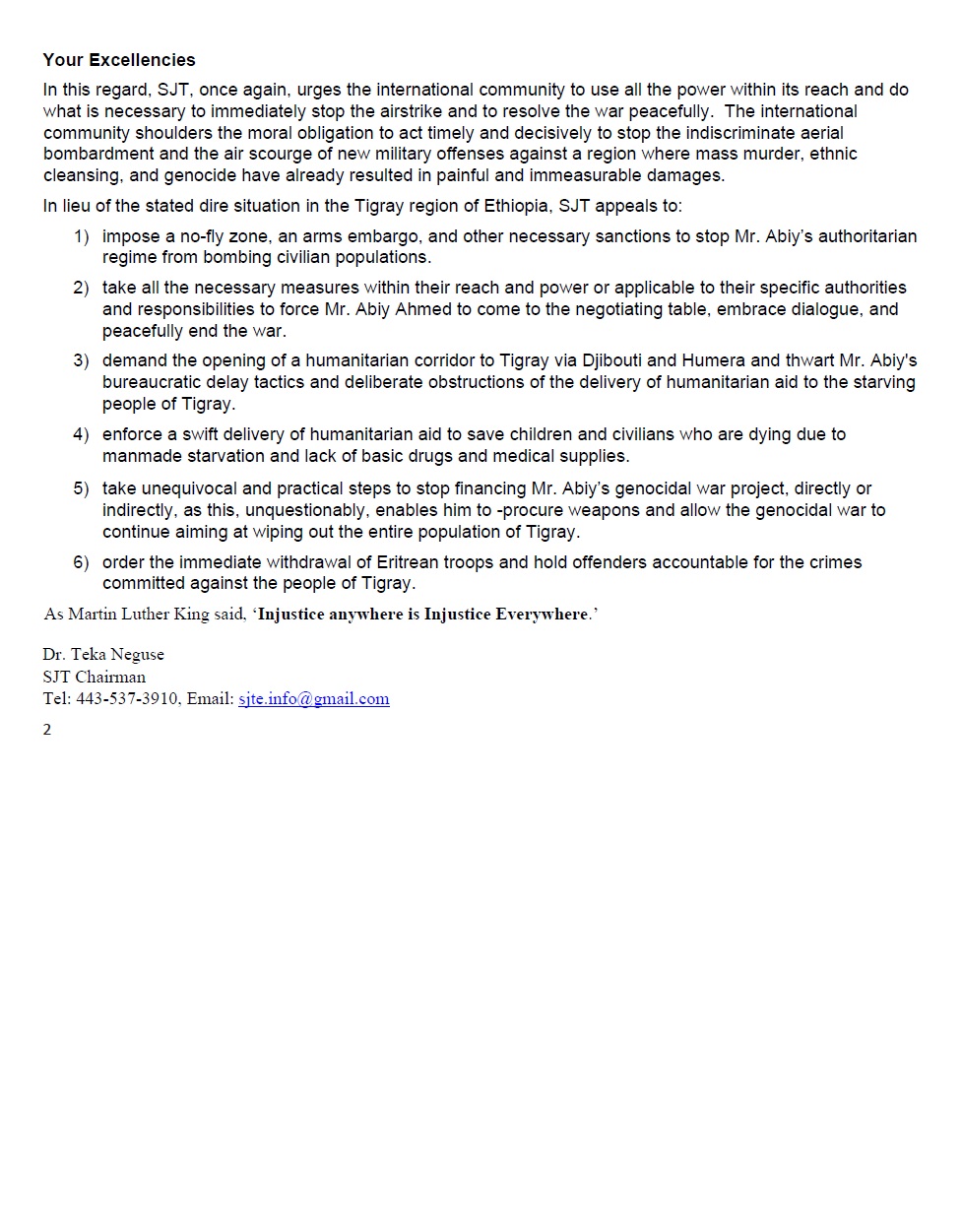 The National Movement of Amhara (NaMA) dropped at statement on the 17th October 2021 proving their allegiance to the Tripartite Alliance and the warfare in Amhara. In that statement they are blaming the Tigray People’s Liberation Front (TPLF) and the Tigray Defence Force (TDF) who has invaded parts of the Amhara region.

The NaMA claims all the war-crimes in Amhara region. That is done without evidence, but just like the state and it’s allies has done the whole war. Instead of taking accountability or proving it. They are blaming and projecting it on the TDF or the TPLF.

We knew when NaMA got one member in the cabinet. That was a proof of the alliance between the Prosperity Party and NaMA. This is why Prime Minister Abiy appointed him and gave the chairman a ministry. Therefore, the statement of NaMA on social media says everything.

The NaMA claims that the ENDF and Amhara Regional Special Forces/Amhara Para-Military Group “Fano” will be able to beat the TDF. The NaMA believes these forces are able to get a victory in the invaded areas of Amhara region. However, there is little to no proof of that.

We are clearly seeing who is the parties who is supporting the government. The EZEMA did the same the other day and now NaMA proves it too. This shouldn’t be forgotten and proves how the Amhara nationalists is part of this government. Peace.