#SONA2017: Mmusi Maimane speaks to the media outside Parliament after walking out (Footage)

Today, on the anniversary of Madiba’s sad passing, let us recommit ourselves to unity, and to working together to build our country, regardless of whatever political differences we may have.

PRETORIA, South Africa, December 5, 2016 – On this day in 2013, the first President of a free and democratic South Africa, President Nelson Mandela passed on, leaving behind a rich legacy of building a dynamic young nation, from the ashes of apartheid.

President Mandela taught us to unite and to love and respect one another as South Africans. He also taught us to build friendly relations with our neighbours and the international community as a whole.

A lot of good work has been done towards building a truly united, non-racial, non-sexist, democratic and prosperous South Africa. The road ahead remains long and full of challenges given the unending economic slowdown globally and locally and the need to continue building a better life for and with our people. There is indeed a lot more hard work to be done, as we move towards the ideal society he envisaged when he said let there be bread, water and salt for all.

Today, on the anniversary of Madiba’s sad passing, let us recommit ourselves to unity, and to working together to build our country, regardless of whatever political differences we may have. Let us work harder than ever, to make South Africa a success story that generations to come will be proud of. 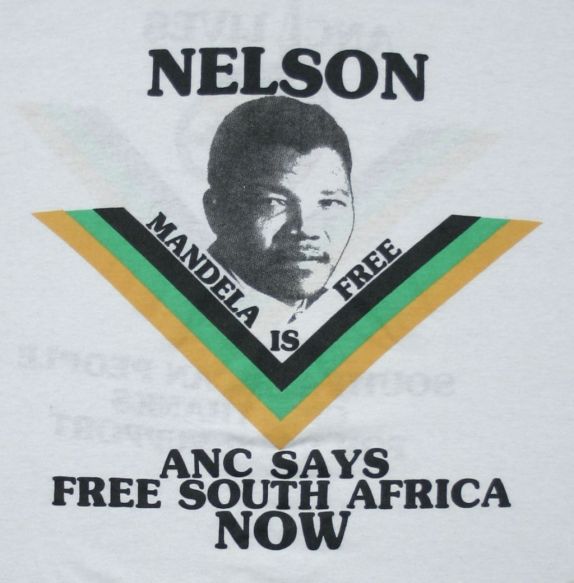 Statement by Nelson Mandela explaining his decision to carry on his political work underground in accordance with the advice of the National Action Council (NAC).

The struggle is my life

The magnificent response to the call of the National Action Council for a three day strike and the wonderful work done by our organisers and field workers throughout the country proves once again that no power on earth can stop an oppressed people determined to win their freedom. In the face of unprecedented intimidation by the government and employers and of blatant falsehoods and distortions by the press, immediately before and during the strike, the freedom loving people of South Africa gave massive and solid support to the historic and challenging resolutions of the Pietermaritzburg Conference. Factory and office workers, businessmen in town and country, students in university colleges, in primary and secondary schools, inspired by genuine patriotism and threatened with loss of employment, cancellation of business licences and the ruin of school careers, rose to the occasion and recorded in emphatic tones their opposition to a White republic forcibly imposed on us by a minority. In the light of the formidable array of hostile forces that stood against us, and the difficult and dangerous conditions under which we worked, the results were most inspiring. I am confident that if we work harder and more systematically, the Nationalist government will not survive for long. No organisation in the world could have withstood and survived the full-scale and massive bombardment directed against us by the government during the last month.

In the history of our country no political campaign has ever merited the serious attention and respect which the Nationalist government gave us. When a government seeks to suppress a peaceful demonstration of an unarmed people by mobilising the entire resources of the State, military and otherwise, it concedes powerful mass support for such a demonstration. Could there be any other evidence to prove that we have become a power to be reckoned with and the strongest opposition to the government? Who can deny the plain fact that ever since the end of last month the issue that dominated South African politics was not the republican celebrations, but our plans for a general strike?

Today is 26 June, a day known throughout the length and breadth of our country as Freedom Day. On this memorable day, nine years ago, eight thousand five hundred of our dedicated freedom fighters struck a mighty blow against the repressive colour policies of the government. Their matchless courage won them the praise and affection of millions of people here and abroad. Since then we have had many stirring campaigns on this date and it has been observed by hundreds of thousands of our people as a day of dedication. It is fit and proper that on this historic day I should speak to you and announce fresh plans for the opening of the second phase in the fight against the Verwoerd republic, and for a National Convention.

You will remember that the Pietermaritzburg Resolutions warned that if the government did not call a National Convention before the end of May, 1961, Africans, Coloureds, Indians and European democrats would be asked not to collaborate with the republic or any government based on force. On several occasions since then the National Action Council explained that the last strike marked the beginning of a relentless mass struggle for the defeat of the Nationalist government, and for a sovereign multi-racial convention. We stressed that the strike would be followed by other forms of mass pressure to force the race maniacs who govern our beloved country to make way for a democratic government of the people, by the people and for the people. A full-scale and countrywide campaign of non-co-operation with the government will be launched immediately. The precise form of the contemplated action, its scope and dimensions and duration will be announced to you at the appropriate time.

At the present moment it is sufficient to say that we plan to make government impossible. Those who are voteless cannot be expected to continue paying taxes to a government which is not responsible to them. People who live in poverty and starvation cannot be expected to pay exorbitant house rents to the government and local authorities. We furnish the sinews of agriculture and industry. We produce the work of the gold mines, the diamonds and the coal, of the farms and industry, in return for miserable wages. Why should we continue enriching those who steal the products of our sweat and blood? Those who exploit us and refuse us the right to organise trade unions? Those who side with the government when we stage peaceful demonstrations to assert our claims and aspirations? How can Africans serve on School Boards and Committees which are part of Bantu Education, a sinister scheme of the Nationalist government to deprive the African people of real education in return for tribal education? Can Africans be expected to be content with serving on Advisory Boards and Bantu Authorities when the demand all over the continent of Africa is for national independence and self-government? Is it not an affront to the African people that the government should now seek to extend Bantu Authorities to the cities, when people in the rural areas have refused to accept the same system and fought against it tooth and nail? Which African does not burn with indignation when thousands of our people are sent to gaol every month under the cruel pass laws? Why should we continue carrying these badges of slavery? Non-collaboration is a dynamic weapon. We must refuse. We must use it to send this government to the grave. It must be used vigorously and without delay. The entire resources of the Black people must be mobilised to withdraw all co-operation with the Nationalist government. Various forms of industrial and economic action will be employed to undermine the already tottering economy of the country. We will call upon the international bodies to expel South Africa and upon nations of the world to sever economic and diplomatic relations with the country.

I am informed that a warrant for my arrest has been issued, and that the police are looking for me. The National Action Council has given full and serious consideration to this question, and has sought the advice of many trusted friends and bodies and they have advised me not to surrender myself. I have accepted this advice, and will not give myself up to a government I do not recognise. Any serious politician will realise that under present-day conditions in this country, to seek for cheap martyrdom by handing myself to the police is naive and criminal. We have an important programme before us and it is important to carry it out very seriously and without delay.

I have chosen this latter course, which is more difficult and which entails more risk and hardship than sitting in gaol. I have had to separate myself from my dear wife and children, from my mother and sisters, to live as an outlaw in my own land. I have had to close my business, to abandon my profession, and live in poverty and misery, as many of my people are doing. I will continue to act as the spokesman of the National Action Council during the phase that is unfolding and in the tough struggles that lie ahead. I shall fight the government side by side with you, inch by inch, and mile by mile, until victory is won. What are you going to do? Will you come along with us, or are you going to co-operate with the government in its efforts to suppress the claims and aspirations of your own people? Or are you going to remain silent and neutral in a matter of life and death to my people, to our people? For my own part I have made my choice. I will not leave South Africa, nor will I surrender. Only through hardship, sacrifice and militant action can freedom be won. The struggle is my life. I will continue fighting for freedom until the end of my days.

– This is just my thoughts. This speech is so powerful and amazing. The sad thing is that its now been one year and a day since his death. This speech I upload here today in rememberence of his peaceful and revolutionary mind. Peace.