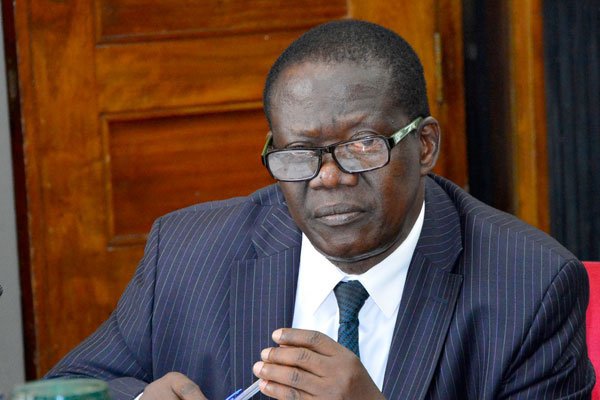 In Luweero, the results for the National Resistance Movement Primaries are finally out. That the MP for Katikamu County North, who has represented in Parliament since 2006. This man has survived a lot and gotten away with it.

This man being Abraham Byandala… the people of Luweero is tired of this man. He has had three terms. He should be famous for getting away with the thieving of the monies supposed to go to building the Mukono-Katosi Road. A scandal he has gotten easily away from… he got acquitted, but still this will always linger on.

Not only that one, but this man has punched a journalist. Media activists wanted him tried for assault of the journalist.

As an MP and Minister, he used the time in office for shady deals. Both with Chinese contractors and ensuring riches for other cronies within the NRM Party. That is why there wasn’t only Mukono-Katosi Road Scandal, but also the NAMO-Scandal. A scandal where the UNRA was supposed to contract to build 4 bridges in Karamoja. However, all the monies ended up in the pockets of family members of Minister Lokeris in Rukiga. That is the sort of favours that has saved him, as he has made friends and therefore, gotten away with it.

In 2011 after he had to defend the budget of his Ministry to the Parliament Committee, a Parliament Committee he was part of in the previous term. He asked for more time, because he was trying to confuse the MPs and not explaining the documents delivered to the Committee. That shows that he was a useful pawn as an MP and did the bidding of others.

That is why its good that Byandala is done as MP. That he lost in Luweero. He used his time to scams and scandals. Enriching himself and the ones around him. Using the Ministry and his position to help himself. He didn’t do it for the betterment of the Republic.

What is worse is that it didn’t cost him. Yes, his synonymous with some road scandals, but he got away with it. The usage of UNRA and Road Development to get funds. That says it all.

Byandala had no problem doing that. So, nobody should be sad his not in office on the fourth term. The loss yesterday proves people was tired of his ways. He couldn’t survive forever.

The man should answer for his corrupt behaviour, Just that two scandals created headlines. We can wonder what else he did or knew about, but didn’t leak out. As I doubt these two was the only ones in the years in office. When you can do it at this scale. There are someone who knew and others who pocketed funds this way. That’s why Dot Services is a thing and other sketchy companies getting road contracts. This is known… and was a thing Byandala did too.

So, Byandala has now fallen and it was about time. Peace.