Archive for the tag “Munoka Sacco”

Prof. Joe O. Onyango calls Mzee an ATM; the same day reports of doling out money to a SACCO and to the Buganda Caucus! 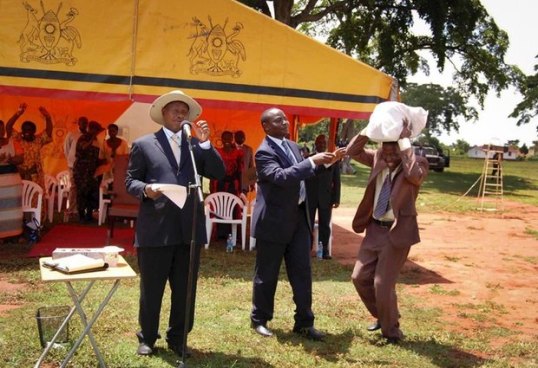 I been saying it too for a while… that the Presient Yoweri Kaguta Museveni spends money where the mouth is. That is for the ones loyal to him and the ones he wants loyal to him. So that hearing a Professor Joe Oloka Onyango from the Makerere University saying the same. Thank you Professor for describing the truth… surely that must not give him peace as he walks home.

Because the National Resistance Movement doesn’t like dissidents and pays to silence critics; President Museveni cannot enjoy being called an ATM, even if it is true. Mzee, gives money to anybody who is loyal or to the Elite. He is taking money from the Bank of Uganda and spending as he pleases and where he see fit without budget or allocations. Therefore we saw straight after the General Election needed addition funding in Trillions upon Trillions.

Here is two stories from one SACCO and the Buganda Caucus, one to pay-off opposition through a fiscal funding and the other to keep loyal MPs in Buganda Caucus.

Mzee gives money to a SACCO:

“The drama was captured during the launch of Muyoka Sacco last week where Mr Museveni handed members Shs100m to mobilise themselves into income generating activities” (…) “NRM members were challenging President Museveni’s action to hand money to people, majority of whom were recently drafted into NRM from the Opposition” (…) “Muyoka Sacco is composed of more than 3,000 members who were recruited by a former DP member Rose Kafeero ahead of the February 18 elections to consolidate NRM’s support in Kampala” (Wandera, 2016).

“Watchdog has been reliably informed that President Museveni through NRM chief whip Ruth Nankabirwa and Kampala Central MP Mohammed Nsereko, spent sh500 million on the event in order to determine who goes through” (…) “The president paid for the full board accommodation at the hotel. Every participant however received a million shillings in transport reimbursement and Sh100,000 for night entertainment. Ssenyonga, a first term MP, replaced Godfrey Kiwanda who was appointed Tourism state minister. Buganda Caucus is the largest regional caucus in Parliament, and if led well, it can offer a strong voice for regional issues in the House” (Watchdog, 2016).

Museveni State House is a ATM:

“Prof Joe Oloka Onyango said every crisis in this country is being solved by way of brown envelopes, a scenario he described as being sad and far below the rule of law in the country” (…) “In early 1980s, when this country was under the leadership of Godfrey Binaisa Lukongwa, State House was like a market place. Today, State House has been converted into an ATM,” he said amid cheers” (Wesaka & Adengo, 2016).

Mzee, has been giving away to his men for a long while not caring about budgets and such. Therefore we have heard both Bank of Uganda and the Ministry of Finance and Economic Development (MoFED). Its reasons for the amounts of government debt and inflations that can come from this kind of behaviour and the rising prices on the goods; this is the effect of reckless spending without implemented plans or budgets. Therefore the funds are taken from wherever at amp speed just like an ATM and not with allocated budget or references as where it was supposed to be used. Peace.