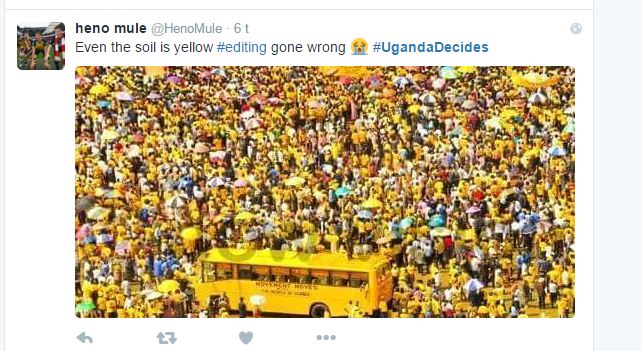 There been a new day on the trail the third one. This day has made most sad. Not by what has been said or really done. Though the news of certain candidates abducted and detained at Jinja Central Police Station. That is sad, but not a shock in the environment they campaign in. It was just a matter of time. The really sad thing is not that the President rallies in a Helicopter in the Northern Ugand with Bebe Cool Yellow-editing the reality. That is just expected by the NRM-Regime. What are sad is not the bad roads that FDC is travelling in Kisoro. That is also expected. What is sad is that the Parliament has fulfilled the wet-dreams of President Museveni with adding his wished amendments to the Public Finance Management of 2015. That is sad. But let’s go through the election trail while we also have a little bit of sorrow for the cancellation of Nominations of the Lord Mayor race in Kampala. Cowardice from the Electoral Commission, check it out!

Quote of the day:

“Had to ask does Brown Bags during corruption means corruption?” 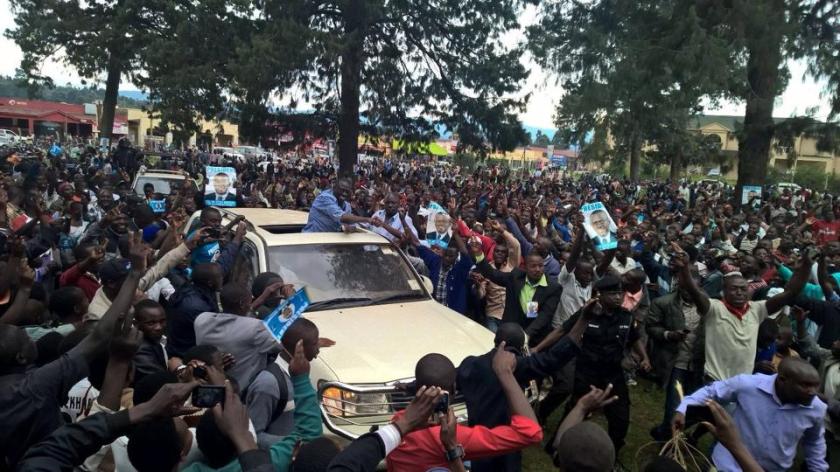 “Not even the bad roads in the villages of Kisoro will stop us from rallying”.

They will have the main rally in the Mayor’s Garden in Kisoro Town. Here he got even more NRM cards up into the hundreds like in recents day from determind members who is thinking of leaving the ruling party. 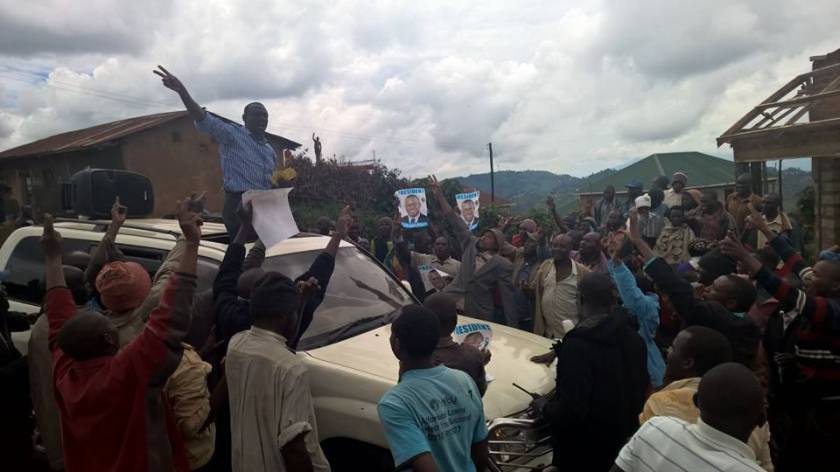 “Museveni can only be President up to May next year. The corrupt can only steal up to then. After May, whoever dips his hand in goverment coffers. His hand will stay in there”.

“Kisoro is one of those region herald has a stronghold of NRM, where its alleged that 93% of voters support the ruling party”.

The Message that Dr. Kizza Besigye had to the people of Kisoro after the rallies:

“Thank you very much Kisoro !..for the overwhelming reception you have accorded to my candidature today. Despite all challenges the people of Kisoro face ,ranging from lack of decent rural roads,.hospitals and schools you have braved the long journeys and I salute your hunger for the message of hope exhibited today at our rallies” (…)“Kisoro region is one of the most naturally endowed part of the country rich with fertile lands and tourist attractions, but having travelled through the remote areas of the region, I feel quite ashamed and disturbed by the state of affairs in this region, the situation is as alarming just like in all the other parts of the country” (…)“It’s not surprising that Mr. Museveni alleges 99% of Kisoro region support him and the NRM regime yet he abandons you to a state of abject poverty, because his government is riddled with corruption to the extent that he doesn’t care about the conditions he exposes you to, as long as you vote for him or he forces himself onto you against your will. The same person makes the other parts of the country believe that everything is rosy in Kisoro which in reality has never been the case” (…)“ Therefore my message to you today is ; begin to change your mindset, Mr. Museveni is not your master, he is supposed to be your servant, it’s you who have the powers to appoint and dismiss him. So Kisoro for you to have better services in the region, we have to work together, join up in the ‘Power 10’ agenda; organize ourselves in groups of ten and connect and liase with each other, and I can assure you this corrupt regime will be history and the Bufumbira region will develop to the great potential it should be” (…)“Thank you so much Kisoro ,I am leaving here in a very energetic mood and full of hope and optimism that the timing has never been more perfect, to liberate our beloved country Uganda. God Bless you the people of Kisoro. For God and my country”. 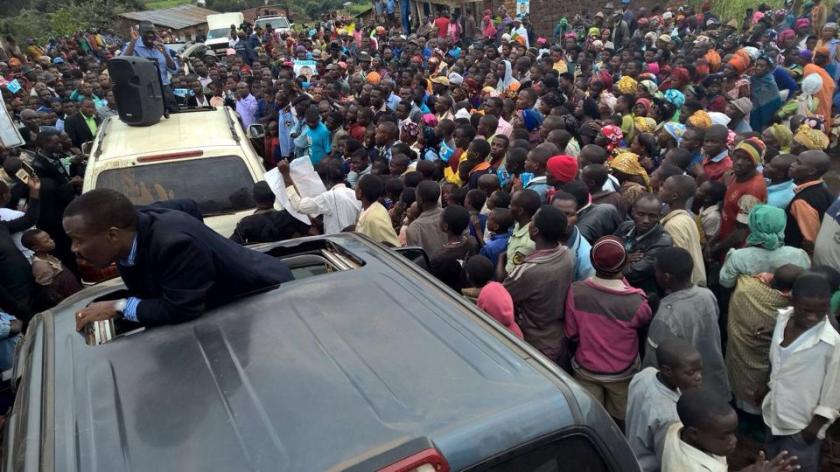 Maureen Faith Kyala has been arrested today. She was detained in Jinja. Maureen is detained at Jinja Central Police Station.

Rule of Law and the FDC:

“Kizza Besigye risks being banned if he defies the law, Electoral Commission (EC) says as it warns the FDC flag-bearer against ‘inciting public with his defiance campaign’. Besigye who is seeking the presidency for the fourth time says his 2016 campaign is one of defiance, not compliancy” (NBS TV) 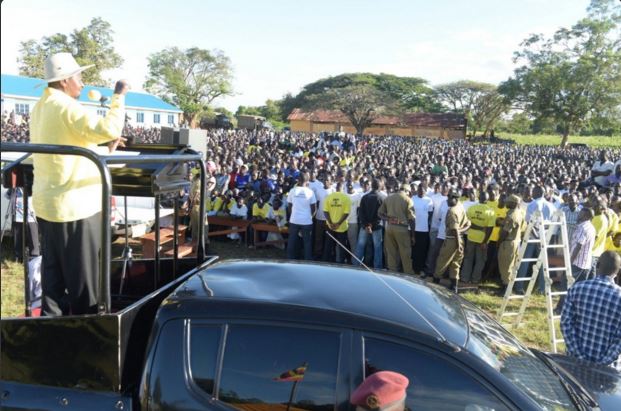 Had their campaign at Dokolo today. There was massive turn-up of Crime Preventers at the venue and especially at the Iguli rally of the President. He also had Rally in Lira.

YKM said today: “When we took charge of Uganda, we enacted a constitution – all power belongs to the people”. 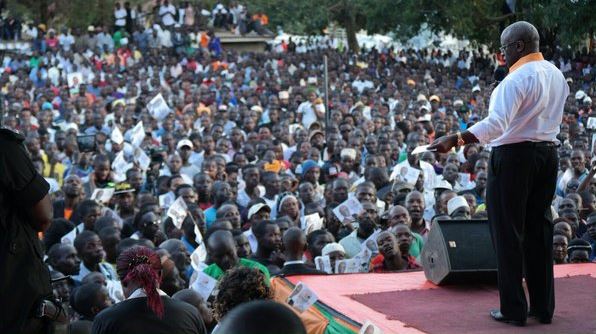 Amama Mbabazi held rallies in  Mityana today. At Mityana he received a spear, shield with the water-hoe symbolic of agricultural roots. DP Norbert Mao is part of the trail, even FDC’s Beatrice Anywar!

Beatrice Anywar said this today: “Who knew DP members would be at the same rally with FDC and NRM members, this is possible with Amama Mbabazi”.

Mathias Nsubuga said this: “We have not sold DP to Mbabazi. TDA is an alliance seeking change in Uganda. Change one person can not bring”.

At the Mityana rally a man asked “Amama how they used to rig the elections?”, he answered the man: “Never leave the premises or polling station”.

Amama Mbabazi said this today: “Every generation has its responsibility. Ours liberation this country, brought it this far. Need to carry on” (…)”I know a lot and can assure such (vote rigging) will not be done this time around”.

Abed Bwanika was at Bugiri and Namayingo. Has anybody seen or heard him? 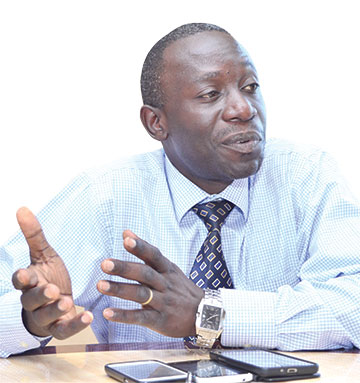 This is an official statement from the Head of Bureau.

At around 2.00am this morning, 11th November 2015, TIC Presidential Candidate Elton Joseph Mabirizi heard a knock on his hotel room. When he asked who it was, the assailant said : “I am your bodyguard”. So he opened. It turned out that it was not his bodyguard but two strange men.

He was in his Pajamas but without a top (bare chest). In that state he was blindfolded, walked to a waiting car, forced into the car boot and driven off to a bungalow where he was ushered in a room and unfolded. In the room he saw three men dressed in military uniform and the two plain clothed ones that had picked him from the hotel. They made no attempt to hide their faces.

He was thoroughly roughed up and warned that if he still wanted to stay alive, he should quit the Presidential race. They had a hot plate in the room which they plugged into a socket till red hot. They told him that if he does not abandon the campaign, next time they would make him sit on it.

He was then blindfolded again and dropped at a small urban settlement at around 3.30am,. He was rescued by the area LC who made arrangements to take him back to his hotel.

It should be noted that he has 11 armed Counter Terrorism Policemen guarding him. Not even one of them including his personal body guard learnt of the abduction until he was brought back to the hotel by the area LC I.

The latest now (12.03 pm) is that he has been driven in another police car to Jinja Central Police Station and has been taken inside.

We have spoken to the EC spokesperson Mr. Taremwa to report the incident. We explained that our candidate had been abducted under that watch of 11 counter terrorism policemen. The phone went off during the conversation. We have called back five times- he is not picking his phone. We have sent a text message to him requesting to call me back. It is now 30 minutes, he has not done so yet.

This should give an idea on how important the EC takes Candidate security.

We shall have tie to address the press when my candidate has been safely evacuated from Busoga region to Kampala.

Today he was scheduled to address rallies in Jinja and Mayuge.

It is not clear whether he will be able to do so.

After all of this, this morning the UPDF had to question the Presidential Candidate.

“Addressing the press on the obnoxious KCCA Amendment Bill that seeks to whittle down people’s sovereignty. It’s only a collapsing regime that takes refugee in draconian laws. I have submitted to the Electoral Commission all the relevant signatures endorsing my candidature ahead of the nominations slated for Monday 16th. I have also called for a stakeholders’ meeting tomorrow 12th November at my residence in Rubaga at 11am to chart a way forward. The struggle continues”.

“This morning l have submitted a video recording of massive rigging in Makinddye Ssaabgabo Municipality masterminded by the Municipality NRM Registrar Charles Settebere, in favour of the outgoing twice flag bearer . l have submitted it to NRM Electoral Commission Legal Officer Mubarakia Kalungi, but his boss Dr. Tanga Odoi and NRM First Vice Chairperson Ah Haji Moses Kigongo, were also aware of the event. l have called for the cancellation of results and a call for fresh party primaries, and to do away with the notorious registrar, Settebere, and replace him with one from the headquarters. All Polling Station registrars should also be reinforced from those at headquarters. Failure to respond to my prayers, l intend to stand on an independent ticket. In my own observation however, three man Tanga Commission is over whelmed. Capt. Abbey Mukwaya Committee should come to its rescue” (Written by Ahmed Musaazi).

In Kijabijo (Gayaza Karagi Road). The community says «they need power back». They have spent 4 months since the transformer was taken by UMEME. So they have put fires into the main roads as a demonstration against the government and UMEME for taking away electricity.

Eng. Dr. Badru Kiggundu of Electoral Commission has suspended the nominations for Lord of Mayor of Kampala. Surely they trying to coup the place for Babu instead of having a fun race between Raga Dee and Erias Lukwago. That is because the NRM-Regime hasn’t the balls to do so, because they know what might happen! Especially since they remember in 2011 and also the last by-election in Amuru…

Finance Minister Matia Kasajja told the Parliament today that there is no money in the Contingency Funds therefore the need for the Public Management Fund 2015 Amendment. The sad note on this matter is that the Parliament passed it. So the Government can just ride into the Bank and take short term loans as they please now!

Think that was enough for the day. Don’t you think this was more than enough. THE PMFA 2015 amendment is frightening enough. The things that been said on the trail is not important, now the Government and the ruling NRM-Regime has secured funding for their campaign and buying of fresh gear to their “Anti-Besigye-Act” and their fresh tear-gas. Surely these elections will be mad and brown bags. Since the Bank of Uganda is now a free for all. You can be surely be proud Hon. Kasajja and President Museveni, there will surely be inflation and devalue of the Shilling in the near future. Kiss 5% inflation rate goodbye! Peace.