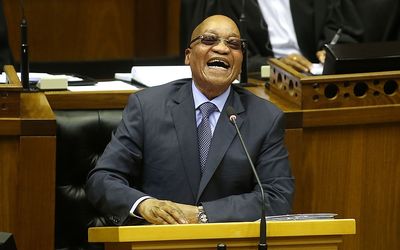 I still hope you are okay in your grand home and travelling still like the President of the Republic of South Africa. I know that you’re still having lots of hot soup and getting more time to spend in court or fellow hired lawyers to represent you and your lordship.

I am writing to you again as the allegations of corruption is becoming the envy of reign. Not that you have written and made progress, policy even of magnitude for the South African people. You are in the headlines because of the acts of corrupt behaviour and intended conspiracy of using the Executive branch to gain monetary gains. That is not Statesman supposed to do. Parts of you know that right?

“President Zuma improperly benefited from the measures implemented in the name of security which include nonsecurity comforts such as the Visitors’ Centre, such as swimming pool, amphitheater, cattle kraal with culvert and chicken run”. (Public Protector Report 10.5.3, p 431)

I am also pouring my heart to you as the Nkandla scandal is just fresh in mind and the Constitutional Court case was not in favour and you have to pay-back to the tax-payers the money you used on the fire-pool and amphitheatre in Kwa-Zulu Natal homestead. So it’s not like you have had breathing space between the allegations and even verdicts entailing the trailing prospects to your name. Not that you are famed for Nobel approach to life or deceive in the matter of economic prosperity and education of your fellow citizens. Your last name Mr. President is synonymous with Corruption. In the next Merriam-Webster dictionary your photo will be right under the word “Corrupt”. And “Acts like a Zuma” and the word in google will be “Corrupt”.

This is not easy to write to you as I am the man who you hire to clean your pool in Nkandla. As I am not even a ANC Stalwart or ANC member, I am foreigner with squat to say really. I only have my word and my mind. So I still don’t expect you or any of your loyal men in the National Assembly to take my words into account. But I might show you the opinion and demeanour the rest of world has of you.

But today, I don’t write the letter because of the Nkandla, have already addressed to you and think you should consider the proposal I had when I wrote it back then. So I will not readdress it and repeat myself to much. As that is something more than often do, as you constantly gets you name caught up in court and get petitions against your actions. Even cases that been dismissed, gets back to life and hunts you.

“Having regard to the conspectus of the evidence before us we find that Mr Mpshe found himself under pressure and he decided to discontinue the prosecution of Mr Zuma and consequently made an irrational decision. Considering the situation in  which  he  found himself, Mr Mpshe ignored the importance of the oath of office which demanded of him to act independently and without fear or favour” (…)”It is thus our view that the envisaged prosecution against Mr Zuma was not tainted by the allegations against Mr McCarthy. Mr Zuma should face the charges as outlined in the indictment” (…)”This Court, for the reasons stated above, finds that the decision of 1 April 2009 by Mr Mpshe to discontinue the prosecution of the case against Mr Zuma is irrational and should be reviewed and set aside” (North Gauteng High Court, Pretoria, 29.04.2016).

This must be a slap on the His Excellency the ghost of the corrupted past hits back at you. That another judge calls the former verdict a irrational one and deem it unfit; as the judge see the case upon fresh review and new process to get into the facts of the matter. That cannot be a great look, you have to pay-back the tax-payers for the fire-pool and now you have to again go through a public view of the old “Spy Tapes”. As you don’t have enough on your plate as your son have quit his job at Oakbay Investments, as the ties to the Gupta Family supposed to not be entangled in your political vision. That as much as the triple finance minister brawl of December 2015, had nothing to the with the use of money for a private plane or other procurement that the state did not have funds for.

So the controversy around never get muted Mr. President. This continues to pressure you position, just as much ever before. At this point you have again a review and over 700 counts of alleged conspiracy of corruption. That must be hurting as you are supposed to be an Executive and the grand leader of the country. The statute of the Presidency, the head honcho and the Commander-in-Chief isn’t supposed to be this much in the court room or have your name synonymous with corruption.

If you are not supposed be a thief or a gangster I would have understand Mr. President. But you have not planned for this. You thought this chapter was done and you could continue with being the leader and grand master with some flash. Instead the Democratic Alliance and the Higher Court have pulled more gasoline on the fire. The one burning sensation that does not cured with taking a shower.

Mr. President, Jacob Zuma you have now more counts on you than the worst criminals. You have now had more cases had more allegations then anybody I know who actually are a current President and also a majority party President. That is in an achievement and not a positive one. All the other issues and trade-agreements that have hunted you; they are following your shadow no matter where you walk.

So His Excellency Jacob G. Zuma, you are the man who still is the head of the ruling party ANC and also the President, means you are the Markie man in the National Assembly. You should be man of honour and man of valour of justice as you represent the chamber; that set the standard for laws and regulations. That makes your position valuable and also significant. Something you already know as you have had for few years now already. You should consider resigning or start seeking for succession as the dishonour you put into the courts, national assembly and your own party says it all Mr. President.

This is just written to you as a consideration and a kind reminder. As I know you won’t directly read any of my letters, but I hope some of your advisors will. And parts of me wish that you would step down as you tarnish the reputation of the ANC. The ANC who was a benchmark and was a party to look up to for guidance and inspiration as he leaders had character and was men of integrity and solidarity towards fellow citizens. That is what is missing in the ANC and you Mr. President is symptom of what the party is missing. Peace.

The Writer of Minbane