Archive for the tag “Mouvement Nubueke” 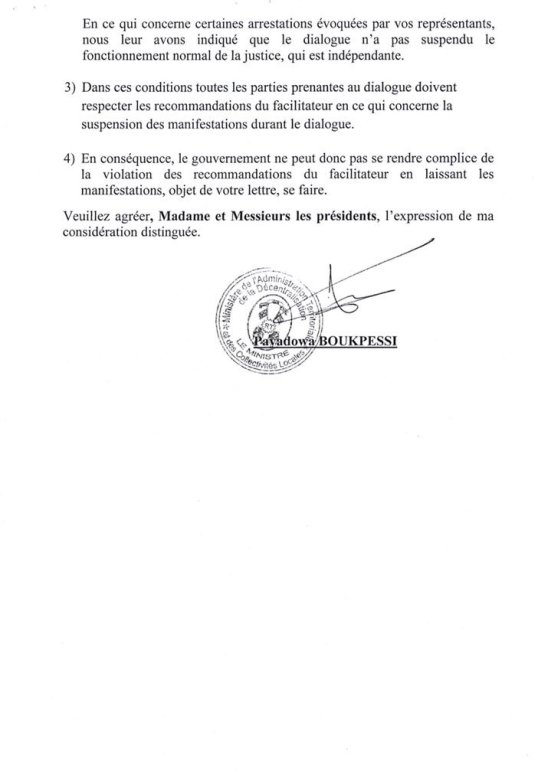 Opinion: The Togolese Dialogue we’re bound to fail, because that’s what Gnassingbe wanted!

The Ghanaian President Nana Akufo-Addo wasn’t going into a ready made process to generate an agreement between government under President Faure Gnassingbe, who has had no ideal or plan of any reconciliation with the opposition. Gnassingbe has worked against the opposition party and hold it silent and not addressed it for months. While the opposition rallies been going on for months, non-stop, even if the government continue to harass and detain activists.

So if you have had feeling that the negotiations and dialogue has only been to give legitimacy for Gnassingbe, than we are on accord. It is the sort of ploy to make the protesters and the demonstrations seemingly foolish. While what happens on the backdoor meetings could deliver some sort of paper, saying that the government will deliver a little change, but not step-down. The opposition are supposed to accept it, because it was a minor concession from Gnassingbe. Even if he didn’t step-down as the public wants, since the family dynasty of the Gnassingbe has to stop. That should be the nail in the coffin. So that means, the address of Gnassingbe, would be to make a succession within his party and not continue to rule.

“In the past, the government managed to never apply the agreements it had signed, Antoine Bawa points. The Ghanaian mediation is respected by both parties, but will it have the means to enforce the agreement? ” Remains the solution of the Togolese army as guarantor of the transition process. It does not participate at this stage in the dialogue. “He is a key player in Togo, but unfortunately discredited by his brutality and his unfailing loyalty to Gnassingbe,” said Comi Toulabor. Façade optimism displayed by both sides for opening dialogue threatens to flake off quickly” (BuzzduTogo, 2018).

Clearly, the opposition had no faith in the dialogue, since the government doesn’t hold their deals and agreement. Togolese has all rights to now faith in it, as long as they have demonstrated, the police and army has violated their rights to protest. People has been hurt, killed and detained for using their words. So, the trust in Gnassingbe isn’t there and they have the rights to question him. His agenda is to prolong his stay in power and not give way.

The Togolese state isn’t a family affair, even if Gnassingbe acts that way and thinks he can get away with it. That is why the dialogue will have no results and the activists will continue to prosper and get more people on the streets. Even if the authorities ban them, like they banned concerts at the beaches. They can ban it all and officially stop it. However, the voices of the people will only be heard in the streets. Because Gnassingbe will not step down easily.

That the dialogue had a mission to address the social-political questions of the protests. It is evident what the problem is and it is one man in general. In linage of people who thinks they have a right to rule the Republic. They are paying the army and paying the security officials to keep the people at bay, but not build institutions or state facilities to build a better republic. That is evident, that the one-family rule of Togo has to stop. The whole reason for the protest, for the people to be free of the shackles of Gnassingbe.

The mediator has to see, it is chronic problem of one man and his elite of the whole state, while the public are struggling with bare minimum. That is the reality and it is not just. The society will change with leaders not ruling their because of family ties, but because of expertise and legitimacy from the public. Neither is there now, just the elite and cronies. The Togolese deserve better. Peace.

Opinion: The international pressure should come from France, India and China – Concerning Gnassingbe and Togo!

The President stated “Togo is addressing an image problem inherited from the long years of crisis in this country. Our efforts to rid ourselves of the bad image of the past are yielding results, but we still have a long way to go. We should do more to attract foreign investors, to make them look at Togo with fresh eyes and to understand the extent of the positive changes that have happened in this country in recent years.” (Crown Agents – ‘ New Office of Togolese Revenue to Boost Economic Recovery’ March 2014).

Been wondering for a while, why no-one of the biggest players and the important nations has added pressure on Togolese President Faure Gnassingbe. This after months upon months of demonstrations and forcing the President out with peaceful means, as he is the second generation dictator and has run the Republic since 1967. They have acted like it was a family affair to control the Republic without any consideration to the public or civil society. That is why the #TogoDebout and #FaureMustGo has such a recognition within the public.

However, the reactions and the lack of celebrations of the demonstrations is evident. Since the International Community at large hasn’t really reacted. If this is because he got the Chairman role of the Economic Community of West African States (ECOWAS) in June 2017. Gnassingbe has clearly accepted and enjoyed the honor of taking charge after Ellen Johnson Sirleaf. So this also buy him time and also recognition abroad.

Still, I don’t think that is the reason for no-one protesting his unreasonable since he is now in his third term and continuing the family project that he started himself in 2005 after his fathers death. That is the reason why the people are ready for his end. Still, the International Community doesn’t seem to care. Like who is the most important international nations who has interests in Togo and who can have a fallout for supporting Gnassingbe? That should be the worry, as the people of Togo should be prepared to boycott these nations and investors from these nations. Who is indefinitely keeping the Dictatorship alive with foreign exchange and budget stimulus.

The first and foremost ally is the French. France has both economic ties into Togo and also 20 investors directly in the Republic. They also the main supplier of Togo, which sells oil, cars, pharmaceuticals and cereals. The French is one of the main foreign direct investments, meaning keeping the status quo is important, because the French are profiting on the leadership as it is today. Togo is also part of the Currency Union the CFA Franc, who controls the Monetary Policies of the Republic. So it’s not like the Republic is totally free from the former colonizer, as they are still controlling the monetary situation and issuing of currency. Plus they are also vital with the foreign investments and main supplier of the Republic too. So if someone should question the dictatorship, it should be the French, but they don’t care unless they starting to lose money.

There are two other central parties in the modern-day Togo, who has not colonized the Republic in the past. India is an important partner in development projects, which they have been since 1994 after the father of the current day President. They have a cordial relationship, that is the status the Indian government puts on it. The relationship is clearly gaining the Indians who are exporting over double of what they are importing from Togo.

This here is proving the reality of the relations between them: “The Indian bank, Exim Bank, organizer of the meeting, has already a branch to Togo where it finances energy and agricultural projects. Recently, India provided a financing of $ 100 million through the Togolese branch. «For many years, our relations have been excellent, and we will still work for the development of our cooperation with Togo. We will continue to share our experiences with Togo in the areas of technology, health and education, » said Jeeva K. Sogar, an Indian diplomat. According to him, Togo and India must work together to implement all the current development projects, for the benefit of the populations, and for emerging Togo. The last financing agreement falls within this process” (Emmanuel Atcha – ‘Togo: About twenty SMEs at the India-Africa Summit’ 16.01.2017).

Then it’s the third nation who is involved in Togo is China, that is not surprised, but needs to show their role in Togo. They are already owning a big share through their business China Merchant Group (50%), who bought the 50% of the Terminal in 2012 and also developed it to a deep-water terminal in 2013. The first one in West-Africa. This is how the relationship was described in 2016:

“Li Keqiang pointed out that China stands ready to draw on respective advantages with Togo to actively push forward practical cooperation in such fields as transportation infrastructure construction, port construction and operation and mining industry. Both sides should vigorously promote the building of high-speed railway network, highway network, regional aviation network as well as industrialization in Africa, so as to realize mutual benefit, win-win results and common development. Faure Gnassingbe noted that Togo-China friendship remains unshakable and becomes even firmer as time goes by. Major cooperation initiatives proposed by China, such as three networks and industrialization, are being implemented and have achieved tangible results. Togo is ready to seize historic opportunities from friendly cooperation between both countries and between Africa and China, give play to its location advantages, improve business environment, and strengthen cooperation in such areas as infrastructure construction, port logistics, mineral resources and poverty reduction between both countries, so as to boost common development of Africa and China” (Chinese Embassy in Norway – ‘Li Keqiang Meets with President Faure Gnassingbe of Togo’ 01.06.2016).

So the Chinese has started to take parts where the French has left off, as the French is directly with investments and imports. The Indian are doing similar, but also development projects. While the Chinese is directly owning enterprises and investments, while also focusing in development projects. All of these three are gaining from the relationship and the Republic’s are earning on the exports. This is contributions to their GDP and the budgets. As this is creating jobs both in Togo and in the respective Republic’s. Therefore, the Togolese should question the power they have to question these, as these three are vital from the outside.

Not that the trading between Benin, Ghana and Burkina Faso doesn’t matter it does. But these here has influential power over Togo with their financial contribution and vital exports to them. As well the needs for their imports. Therefore, the French, Indian and Chinese should interfere for the common good for the Togolese. Especially, since the public will is there. The Opposition is ready and the public is tired of Gnassingbe and his elite. The people are ready for change and new type of government. Not the type that is there right now.

If there are supposed to be outside pressure, then it needs to come from these. This is the ones who has invested and has ties to Togo. They don’t want to lose their possible resources or businesses over choosing loyalty to Gnassingbe. These partners should also consider themselves and what sort of person they want to support. Even if they don’t believing in direct interfering in other states affairs. They are still doing that with the exports/imports and development projects.

So the steps now for the Togolese, is first to either boycott these imports and businesses as much as possible. Secondly to send petitions to them to inform about the ill-activity of the dictatorship. The last will most likely not make any changes, but the first will spark their curiosity. Peace.